Andrei Rublev is arguably the most accessible of Soviet director Andrei Tarkovsky’s films. It is also his longest. Unlike his better-known movies, Solaris and Stalker, Andrei Rublev is historical (not science fiction). Nevertheless, it shares the same essential qualities as those later films in that it relies more on mood and atmosphere than narrative and character. Tarkovsky’s goal with Andrei Rublev was to recreate Medieval Russia (early 15th century) and drop the viewer into it, allowing him or her to explore the landscape along with the characters.

For anyone who can overcome the barriers presented by Tarkovsky’s style and approach, there is much to appreciate. Andrei Rublev is a biography only in the sense that the main character once walked the Earth – a famous Russian painter who lived and worked during the 1400s. Not much is known about the historical person behind the name – certainly not enough to form a rigorously factual telling of his life. Tarkovsky doesn’t try. Instead, he meticulously recreates the world in which Andrei lived and uses it as an opportunity to explore the possible influences on the man’s art. This is the main theme: about how, for an artist, experience informs output. Andrei Rublev also touches on the importance of religion and religious iconography in the formation of Russia as a nation. There’s also a strong message about the viciousness of human beings across class barriers. Peasants are perceived by the Grand Duke as disposable commodities that he is free to do with as he wishes. 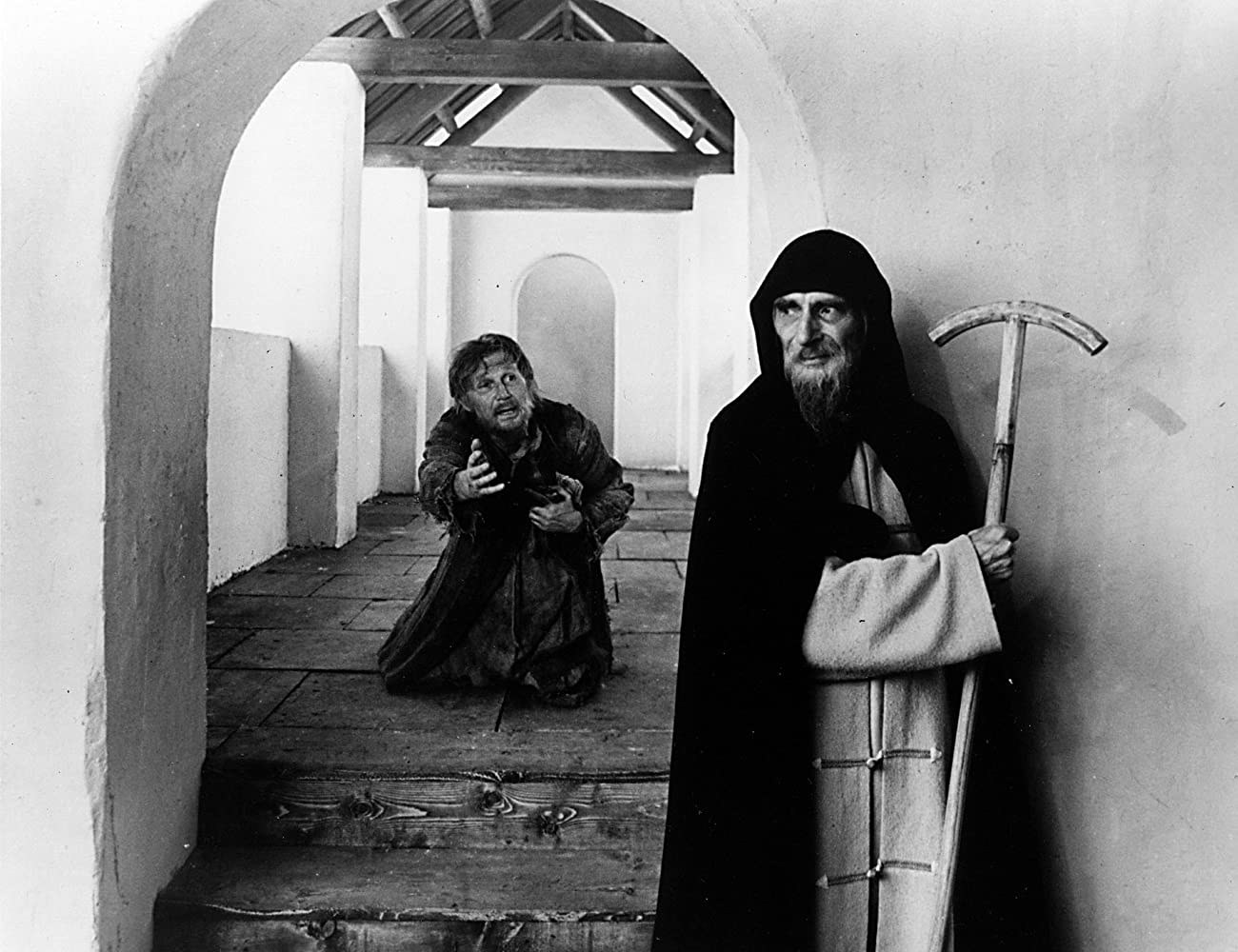 The movie is divided into eight chapters with a narratively unrelated prologue (about a failed attempt at early balloon flight) and epilogue (a color catalog of several surviving icons). In the beginning, we are introduced to three monks and icon painters – Andrei (Anatoly Solonitsyn), Daniil (Nikolai Grinko), and Kirill (Ivan Lapikov), who seek shelter in a small village during a storm. We soon learn that there is envy and jealousy amongst them – most particularly where Kirill is concerned. When Andrei is offered an opportunity to work with the respected artist Theophanes the Greek (Nikolai Sergeyev), Kirill is offended and quits the monastery. Andrei eventually leaves for Moscow accompanied by his apprentice, Foma (Mikhail Kononov). The trip is interrupted by a Passion Play showing Christ’s crucifixion in the Russian winter. Later, while camping, Andrei encounters a group of naked pagans. Seized by curiosity, he watches their (illicit) rituals and is saved from imprisonment by a woman.

Andrei and Danill end up working on the artwork of a church in Vladimir on a commission from the Grand Duke. While the ruler is away, the church is sacked and raided by a band of mounted Tartars who kill and rape with abandon. In order to save a woman, Durochka (Irma Raush, Tarkovky’s wife at the time), Andrei kills one of the invaders with an ax. To atone for this, he takes a vow of silence. Once he returns to the monastery, he remains unspeaking and no longer paints, although he is reunited with Kirill, who has returned seeking forgiveness. 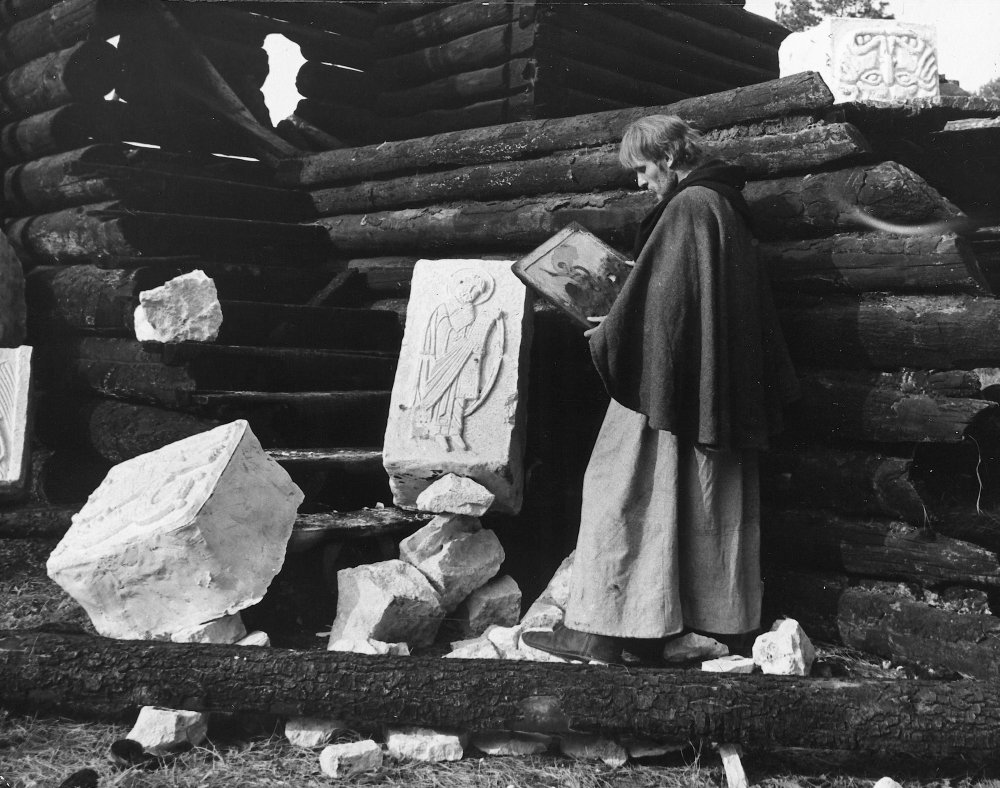 In the film’s final act, Andrei is on hand for the casting of a bell by Boriska (Nikolai Burlyayev), the son of a bellmaker, for the Grand Duke. The price for failure would be Boriska’s head. Nevertheless, he preservers, finding the right clay, choosing the location of the pit, and successfully creating the mold. Once the bell is completed, there is a long wait as Tarkovsky ramps up the tension before the bell finally tolls. The sequence is remarkable its authenticity and ability to generate suspense. Andrei Rublev ends with Andrei ending his vow of silence and taking Boriska under his wing with these words: “You’ll cast bells. I’ll paint icons.”

Tarkovsky’s approach to Andrei is to make him, like viewers, an observer of events. He is rarely an active participant – the killing of the Tartar in the church being a rare exception. Instead, things happen around him. He is like a bit of flotsam, carried along by the film’s internal momentum, seeing and internalizing all the things that transpire before him. By the time the film is over, we have a strong understanding of the world in which Andrei lived but little appreciation of the character, except that he has suffered massive guilt about a variety of things – most notably the killing – as well as doubts about his faith. 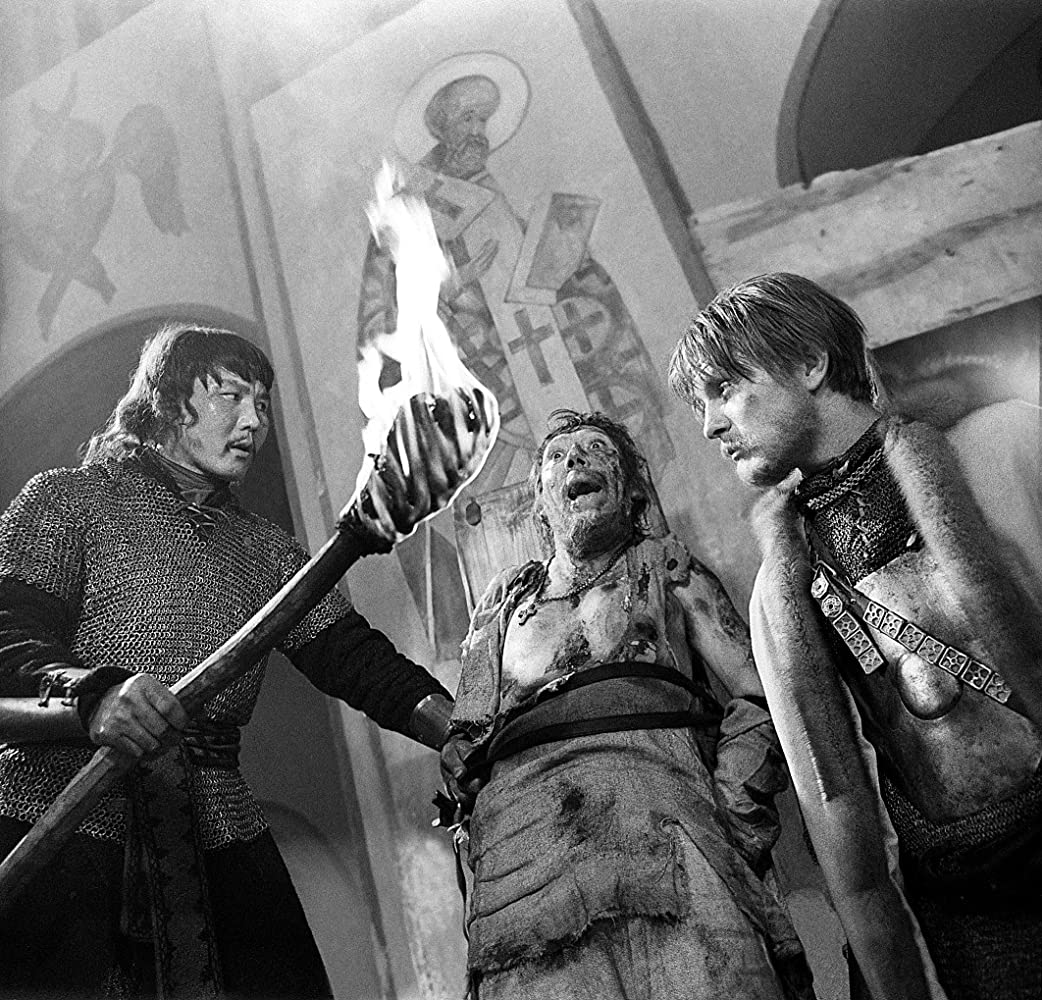 The importance of mood to the film is so strong that many passages could be seen without subtitles because the dialogue is either unnecessary or simplistic. The only exceptions are the scenes when Andrei and Theophanes discuss/debate theology and other matters. On those occasions, it’s necessary to understand what they are saying to recognize their perspectives.

As is often the case with films made under the aegis of repressive regimes, several versions exist due to censorship demands. Tarkovsky had difficulty getting the film onto screens. His initial 200-minute cut was whittled down to 185 minutes after complaints by Soviet officials and an even shorter version came to the United States. Despite being completed in 1966, the worldwide “rollout” of Andrei Rublev wasn’t completed until 1973. Its Soviet release didn’t happen until Christmas Eve 1971 and its U.S. premiere wasn’t until two years later. Two versions are available on home video: the original, longer film and Tarkovsky’s preferred edit, which runs 185 minutes.

Andrei Rublev is emblematic of a kind of filmmaking that has gone out of fashion. Tarkovsky made art and was unconcerned about his productions’ commercial prospects. Today, his films are beloved by cineastes. In the mainstream, they would be deemed slow, ponderous, and impenetrable. It’s likely that an average movie-goer would do what Soviet General Secretary Brezhnev did upon first seeing Andrei Rublev: walk out midway through. A big part of the problem is that movies like this rely on immersion for a lion’s share of their power and it’s difficult to achieve that quality in a home video environment. The film needs to be seen in a cavernous theater on a big screen but such opportunities are rare verging on nonexistent. On a TV, even a large, expensive one, moments of grandeur are reduced and, as a result, the movie is at times slow, ponderous, and impenetrable. Blame it on shifts in technology and culture; Andrei Rublev is not alone in suffering from how the industry has changed in the last half-century.