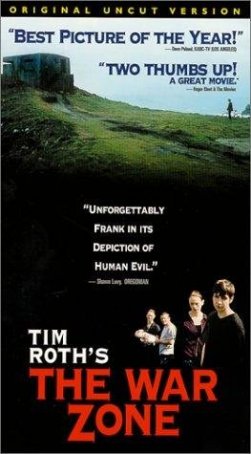 Note to readers: this review contains spoilers. While I do not believe the revelation of certain plot points will in any way compromise the viewing experience, those who wish to see The War Zone without having previous knowledge of a key element would do well to bail out now and return after they have seen the film.

The title of The War Zone conjures up images of devastation and disaster, of broken lives and rotting corpses. And, while this stunningly accomplished feature debut from Tim Roth has nothing to do with traditional battlefields, it is every bit as harrowing as the first 30 minutes of Saving Private Ryan or the whole of Schindler's List. The destruction presented in this film is as graphic and shocking as anything depicted in the most unsparing war movie, except that the victims are not soldiers trained for combat, but children placed in harm's way.

Incest isn't just a "nasty little secret" or a "family issue." It is an abuse of power and a violation of trust. Even when the sex is ostensibly consensual, it is rape. Perhaps the most unnerving thing about incest is how often it happens and how many silent victims there are. Statistics are meaningless with this kind of molestation - shame keeps a majority of those affected quiet, so there's no way to get an accurate count. Yet experts agree that it is a prevalent cancer that infects families of every racial and social background. Gather a hundred random people together, and there are virtually guaranteed to be victims (and perhaps abusers as well) in their midst. Seat those same hundred people in a theater showing The War Zone, and the visceral reactions of the victims will betray them. At a public screening of this movie during the 1999 Toronto International Film Festival, one viewer was so upset that, in the midst of a crucial scene, he rose to his feet and shouted that he couldn't take any more, then headed for the exit, intending to pull the fire alarm. Roth, who was in attendance, intercepted him at the door, and it took 20 minutes of intense conversation to calm the man down.

The War Zone is a devastating motion picture; it's the kind of movie that stuns an audience so absolutely that they remain paralyzed in their seats through the end credits. It does not deal in euphemisms nor does it hide the physical and emotional brutality of the act from viewers. What Roth has accomplished is nothing short of brilliant, but it is also incredibly daring, because the film has no commercial prospects. No matter how many critics trumpet The War Zone's merits, viewers will not flock to see it; the subject matter is too upsetting and daunting. Yet for sheer force of emotional power, I have not seen the movie's like in years. As I write this review two weeks after seeing The War Zone, every scene remains fresh in my mind, and the overall impact has not lessened.

The film takes place in the rural Devon countryside, where a family of four has just moved from London. Events are related from the perspective of 15 year-old Tom (Freddie Cunliffe), who is unhappy with life away from the city. His 18 year-old sister, Jessie (Lara Belmont), has apparently adjusted better than he has. His parents (Ray Winstone, Tilda Swinton) seem happy and comfortable in their new home, and his mother is on the verge of delivering her third child. Then, shortly after the baby is born, Tom's world is turned upside down when he spies a covert sexual encounter between Jessie and his father. Tom confronts Jessie about the incident, but she denies it, accusing him of having an overactive imagination. He is not convinced, however, and sets out to learn the facts. The truth he must face, and its ramifications upon every member of the family, form The War Zone's core drama.

In his handling of the material, Roth shows more ability than many accomplished, veteran filmmakers. He paints Devon as a grim, rainy place where darkness and grayness are always enroaching upon the light. Roth deals with the story in a way that does not insult the viewer's intelligence. There is much ambiguity to be found here. While one key rape is graphically depicted, the depth of the father's depravity and the question of how much the mother knows are left up to the individual to determine. Roth freely admits that, with The War Zone, he has pushed the envelope as far as it can go - had he attempted more, the movie would have become too painful for anyone to watch. Even in its current form, it is a difficult, although rewarding, experience for those who make the effort. There is no comic relief and no happy ending (although there is a catharsis of sorts). Perhaps Jessie puts it best when she says, "You want everything to be nice and sweet, but it isn't." Comparisons with Francois Truffaut's The 400 Blows and Lasse Hallstrom's My Life As a Dog (two films that Roth says inspired his approach to The War Zone) are entirely reasonable.

While Roth's adept direction and Alexander Stuart's screenplay are integral to the film's success, the consistently high level of acting is of paramount importance. Roth has assembled an amazing quartet of actors, two of whom have not had previous screen experience. Newcomer Freddie Cunliffe plays the silent, stone-faced, and uncommunicative Tom. Cunliffe effectively captures the teenager's growing horror and anger as he learns the truth about the relationship between his father and sister. It would have been easy for Cunliffe to go over-the-top, but he keeps everything low-key, and therein lies the power of his performance. As Jessie, Lara Belmont is extraordinary. Her portrayal of the tormented, conflicted girl astonishes with its raw power. Stripped naked for the cameras (both emotionally and physically), the young actress gets everything right, from the heartbreaking pain evident during the rape scene to the subtle nuances of her interaction with the other characters. Her ability is most evident during the scene when Tom confronts their father - as a disconsolate, uncontrollably sobbing Jessie sits at the kitchen table, Belmont brings character's torment to the audience with full force. Not since Emily Watson in Breaking the Waves has an actresses' work affected me this deeply.

The two veterans in the cast are Ray Winstone and Tilda Swinton. Winstone is no stranger to this sort of role - he played something similar in Nil By Mouth (another difficult-but-powerful British film). The strength of Winstone's performance is that he makes his character into a far more complex individual than the typical child abuser. With the exception of the rape scene, he is shown to be a loving, caring father and husband. Only once does the monster come into the open. Swinton is equally effective as the mother, who is apparently oblivious to the true nature of her husband's relationship with their daughter. The actress played this part immediately after giving birth to twins, and shows great dedication to her craft for displaying her nude body in its post-birth form.

Over the years, few movies have taken this sort of forthright look at incest. Often, even in the best of films (like Atom Egoyan's masterful The Sweet Hereafter), it is relegated to a subplot or the impact is diluted to make the picture more palatable. Stories about incest are actually presented with some frequency in network TV shows and made-for-TV movies, but the constraints of the medium emasculate the subject matter, leaving it poorly-focused and melodramatic. In my lifetime, I have seen thousands of films, but none has been as unflinching in its approach to this issue as The War Zone. For his courage and ability, Tim Roth deserves all the praise and recognition he probably will not get. To date, The War Zone is the best movie of 1999.