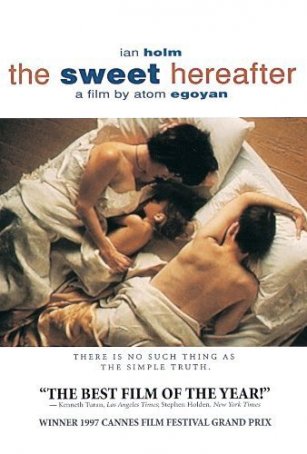 The Sweet Hereafter is film maker Atom Egoyan's most compelling movie to date. Amplifying many of the themes explored in his previous outing, Exotica, the Canadian director/writer/producer shows the powerful effects of grief and anger on a community devastated by an unspeakable tragedy. During the course of this 110-minute, emotionally-turbulent experience, Egoyan doesn't ask any easy questions or propose any pat answers. This is film making at its most powerful: drama capable of shaking the soul, yet free of even the slightest hint of manipulation, sentimentality, or mawkishness. The movie has an impact that extends far beyond the walls of a movie theater - a quality shared by a distressingly few of today's releases.

Egoyan began making films with 1984's Next of Kin, a critical success that earned him a nomination for Canada's Best Director Genie Award. He followed Next of Kin with Family Viewing, Speaking Parts, The Adjuster, and Calendar, all of which shared certain common traits, including a wildly elliptical style, themes of emotional isolation, and a degree of distance between the characters and the audience. Egoyan's early movies, although intellectually stimulating and fascinating to observe from a critical standpoint, were emotionally dissatisfying. However, the director's next effort, the much-lauded Exotica, broke down the character/audience barrier, and, at the time, proved to be Egoyan's most challenging effort. Yet, as forceful as Exotica was, it was only an appetizer for The Sweet Hereafter.

As with all of the other Egoyan-directed movies, The Sweet Hereafter involves more than one storyline, although the internal connections are less oblique here than in the previous features. This could easily be viewed as Egoyan's most commercial work thus far. It is certainly his most accessible. There are those who would equate words like "commercial" and "accessible" with the term "creative compromise," but nothing could be further from the truth. Although Egoyan's methods may have become more mainstream, his message is richer and more complex than ever.

The central event of The Sweet Hereafter is a school bus accident that results in the death of fourteen children and the injury of many others. On a cold winter's day in the small town of Sam Dent, British Columbia, the driver loses control of the vehicle and it careens off the road onto a frozen lake which gives way beneath the weight. The scene of the bus sinking into the water - a stark, simple shot - is one of the most painfully effective and disturbing sequences in any film this year. The impact is further enhanced by presenting the fatal moment from the perspective of an impotent father. Death has become such a cheap, bloody commodity in modern movies that viewing a scene like this is a revelation.

Since Egoyan eschews linear storytelling by allowing time to be fluid rather than fixed, we don't see the actual accident until midway through the movie. The opening scene introduces us to Mitchell Stephens (Ian Holm), an ambulance-chaser who has come to Sam Dent to persuade the victims' parents to join in a class action lawsuit. He promises financial compensation for their losses, claiming that while no one can offer an outlet for their grief, he can be the voice of their anger. In fact, Mitchell knows something about those emotions. His daughter, Zoe (Caerthan Banks), is a drug addict on the road to self-destruction. All of the fury bubbling within Mitchell becomes focused into his work in Sam Dent. But there is no clear culprit to sue for the bus accident, and Mitchell is groping for a villain who doesn't exist. Parents join him in the vain hope that money will soothe the pain or bring some sort of "closure," but the greed for compensation fractures the community.

Other players in the drama include Nicole Burnell (Sarah Polley), one of the accident survivors. She's a teenage, would-be rock star who loses the use of her legs because of the experience, and who becomes the corner stone of Mitchell's case. As the victim of incest, however, she is a damaged individual. Her parents, Sam (Tom McCamus) and Mary (Brooke Johnson), are among the lawyer's most eager clients. Two others involved in the suit are Wanda and Hartley Otto (Arsinee Khanjian and Earl Pastko), who lost an adopted child in the crash. Risa and Wendell Walker (Alberta Watson and Maury Chaykin), whose only son perished beneath the cold waters, have also signed with Mitchell. But Risa's lover, Billy Ansell (Bruce Greenwood), reject's Mitchell's advances. Having recently lost his wife, Billy is acquainted with grief, and this enables him to accept the death of his twin children, rather than wallow in denial. Finally, there's Dolores Driscoll (Gabrielle Rose), the longtime bus driver who must live with the weight of responsibility for what happened.

The Sweet Hereafter is based on the novel by Russell Banks, but Egoyan has infused it with his own inimitable style. One of the film maker's more successful innovations is to make explicit comparisons between the situation in Sam Dent (the loss of the children) and the one in the Robert Browning poem, "The Pied Piper of Hamelin." In the "Pied Piper," the lone crippled boy left behind by the Piper forever regretted his exclusion from a land where "everything was strange and new." It could be argued that, in The Sweet Hereafter, the abandoned one is Nicole. The sweet hereafter is the strange, new land that her schoolmates reach, but which she has not yet attained.

The most intriguing character is Mitchell. The best-developed of all of The Sweet Hereafter's numerous multifaceted individuals, Mitchell proves to be a sympathetic figure even though his influence is negative. The lawyer is not only after a quick buck (he gets 1/3 of the proceeds from any favorable settlement), but he believes that his own tragedy forges an emotional link between him and the residents of Sam Dent. What he can't see, however, is that his private agenda is tearing asunder the fabric of the community. Personal demons and an obsession to assuage his own guilt, not a need to see justice done, drive Mitchell.

As always, Egoyan has assembled a top-notch cast. Ian Holm paints a powerful and stirring portrait of Mitchell as a haunted, hurting figure whose inner torment touches our hearts. Holm acts with his eyes and face, as well as with his voice and actions. The actor's shining moment is when Mitchell relates the story of how, as an infant, his daughter nearly died from a spider bite. It is during this scene, more than any other, that the audience truly connects with a character that, under other circumstances, might be worthy of disdain.

Most of the other performers are Egoyan regulars. As always, the director's wife, Arsinee Khanjian, is on hand. Bruce Greenwood, playing a role not unlike the one he essayed in Exotica, is again a grieving father. Sarah Polley, who was also in Exotica (she was a babysitter), has a more complex role here. In addition to portraying Nicole, Polley contributes the vocals to many of the songs heard throughout the film, including the one that plays over the closing credits. Other familiar faces from previous Egoyan features include Gabrielle Rose, Maury Chaykin, and David Hemblen (as Dolores the bus driver's husband). Alberta Watson, who made a strong impression as the mother in Spanking the Monkey, is Risa Walker.

One of the many tangential aspects of The Sweet Hereafter is to illustrate the shallowness of the numerous John Grisham movies. Compared to Egoyan's thoughtful and potent examination of the role of a lawyer in society, even The Rainmaker, the best adaptation of a Grisham novel to date, seems flat and unconvincing. Egoyan has given us a powerful motion picture that resonates on every level. The most amazing thing about The Sweet Hereafter is not the style, the acting, or the cinematography (all of which are exceptional), but the way the film successfully juggles so many themes, persuading us to reflect upon them all before the 110 minute running time is up. This is truly a great film - easily one of 1997's best.