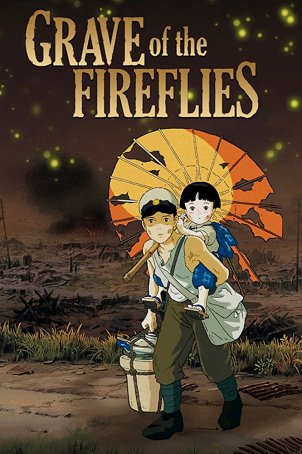 Grave of the Fireflies, a 1988 production from the famed Japanese animation house Studio Ghibli, is perhaps the saddest animated movie ever made. As emotionally wrenching as any live-action film, Grave of the Fireflies resets expectations of what an animated movie can be if the men and women behind the production choose to move in unconventional directions. Although Grave of the Fireflies is not traditionally inappropriate for younger viewers (meaning it has no profanity, sexual content, nudity, or graphic violence), the subject matter is as “adult” as anything I can imagine. While a child might be affected by the film, it takes the weight of a certain number of years to fully absorb what director Isao Takahata has put up on the screen. 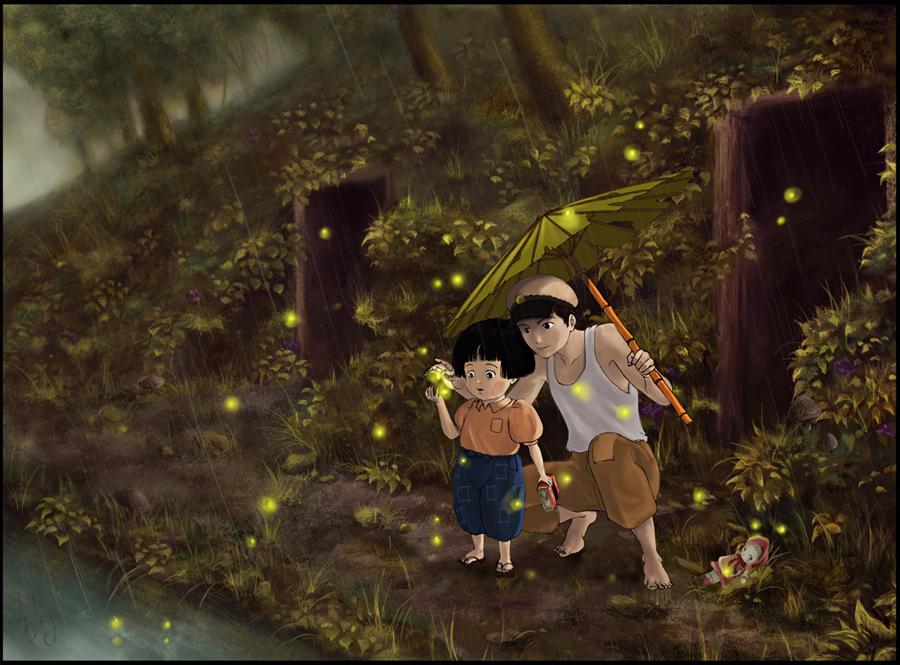 If viewed from a purely technical perspective, Grave of the Fireflies can’t match any recent high-budget American animated film for visual razzle-dazzle. That isn’t the point, however. Takahata isn’t competing with Disney; he’s growing the genre by going to places that no Hollywood animated offering would go. The foreground animation is “good enough” and there are times when the backgrounds have the quality of a painting. It may take a moment or two to adjust to the film’s style – hand-drawn animation, after all, is a relic of a bygone day – but, as with any unconventional method of storytelling, this one weaves its spell. Its language isn’t purely that of artwork and drawing; it’s one of emotion. The use of animation, because of its associations with innocence and childhood, encourages us to lower our barriers and open up to the experience. That makes the culmination all the more powerful. Perhaps the late Roger Ebert said it best when he wrote in his retrospective of the film that “Grave of the Fireflies is an emotional experience so powerful that it forces a rethinking of animation…[It] is a powerful dramatic film that happens to be animated.” He also quotes Ernest Rister as having observed it to be “the most profoundly human animated film I’ve ever seen.”

Grave of the Fireflies is many things: a story of sibling bonding, a tale of survival, a struggle against the ugly side of human nature, and a reminder that the greatest victims of any war are often the ones whose stories are never told. Takahata has firmly rejected the notion that Grave of the Fireflies is anti-war but a creator no longer has sole right of interpretation once his work of art is out in the public. The tragedies of the movie are a direct result of World War II. The film doesn’t question the “rightness” or “wrongness” of the war or its various military engagements but it shows that when powerful people use those without standing as tools and pawns, the collateral damage can be devastating. One can justify some wars on the basis of serving a “greater good” but that doesn’t take away the terrible truth that even the most righteous victory will have its share of innocent victims. 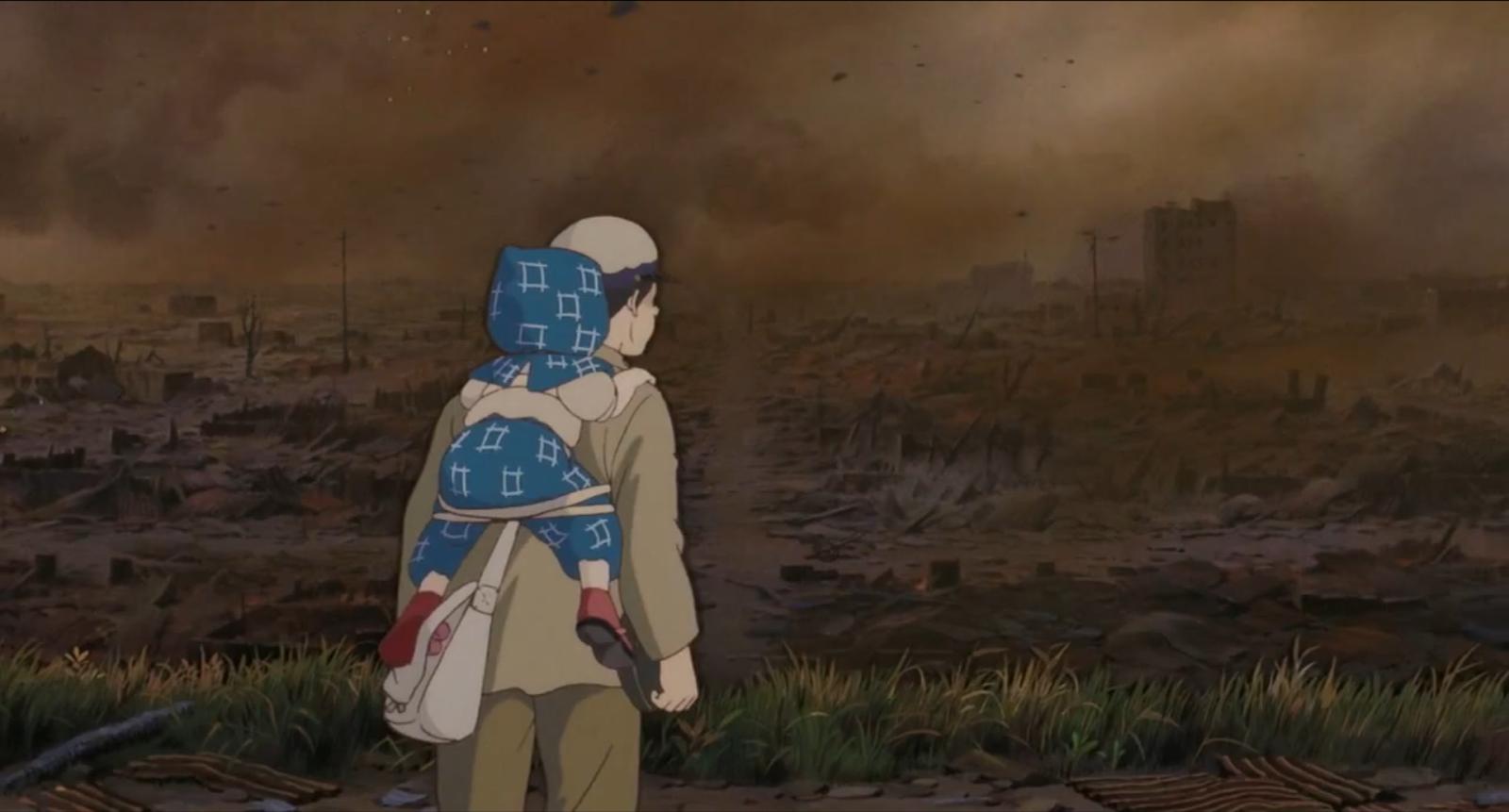 Grave of the Fireflies is presented in flashback. It begins with the death of the narrator/main character, a teenage boy named Seita (Tsutomu Tatsumi), who perishes of deprivation in the bowels of Kobe’s Sannomiya Station shortly after the end of the second World War. After his spirit departs his body, Seita is reunited with his four-year old sister, Setsuko (Ayano Shiraishi). The implication is stark – Setsuko must also be dead – but knowing what is to come doesn’t prepare us to witness it first-hand, especially after the care the director takes to humanize these characters over the course of the next 80 minutes.

The main story rewinds time six months to the middle of March 1945. The war is already lost to Japan but they soldier on. The turning tide, however, brings with it the Allied fire-bombing campaigns. During one such attack on the city of Kobe, Seita and Setsuko become orphaned when their mother is killed. (Their father, a Naval officer, is at sea and, as we later learn, is probably dead as well.) For a while, they live with a distant aunt (Akemi Yamaguchi) but her initial charity turns to bitterness and the siblings leave, believing they can make a better life on their own. At first, it seems they might succeed. They find a hillside cave that they develop into a makeshift shelter and there is a brief period of happiness. It doesn’t last, however. The lack of food leads to malnutrition. While attempting to steal provisions, Seita is viciously beaten. Setsuko becomes ill and, as her condition worsens, there’s little Seita can do for her. The movie’s trajectory from that point to the end is as predictable as it is painful.

Grave of the Fireflies is based on a semi-autobiographical story written by Akiyuki Nosaka who, unlike Seita, survived the fire-bombings and their aftermath. Like his protagonist, he lost a sister to malnutrition and, over the years, he was consumed by survivor’s guilt. Two live-action Japanese movies have also been made of the book (one in 2005 and one in 2008) but neither has achieved the worldwide acclaim and recognition accorded to the animated version. I haven’t seen either but it’s hard to imagine that any live-action interpretation could have a similar impact. The animation is a large part of why the movie has such force. 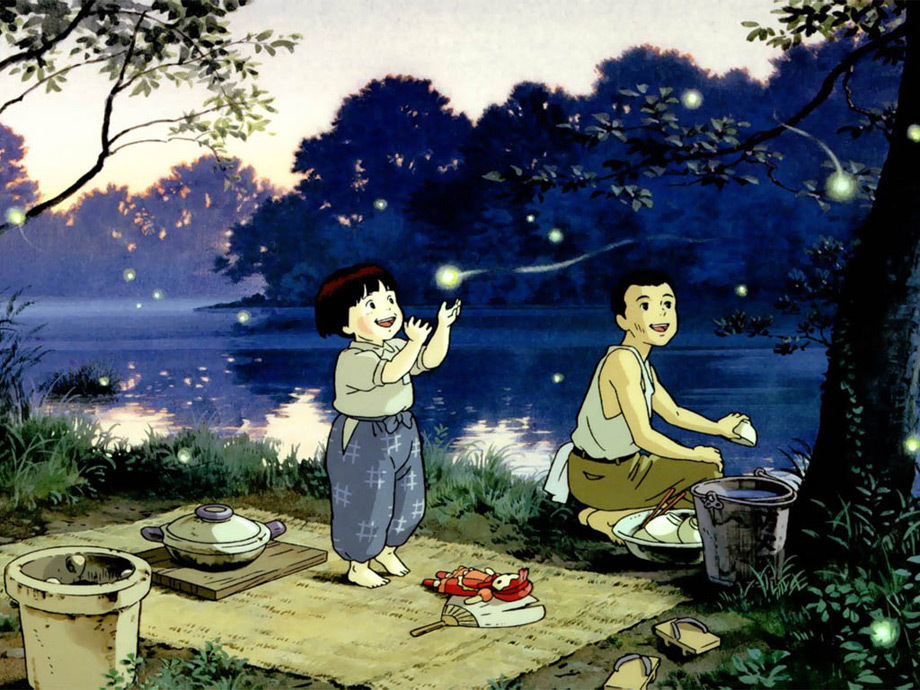 For its 1988 Japanese release, Grave of the Fireflies was stacked as a double-feature with the ebullient My Neighbor Totoro, another Studio Ghibli release (Hayao Miyazaki’s follow-up to Castle in the Sky), in an apparent attempt to “soften the blow.” The movie wasn’t widely shown outside Japan during the early years of its life cycle, but it eventually made its way to North America some five years later for a home video release. (Beware the English-dubbed version – the voice acting is atrocious. The movie works best in the original Japanese with subtitles.) Over the 25 years it has been in circulation in the United States, it has amassed a passionate following.

Some movies are such singular achievements that they deserve to be seen at least once by everyone who considers himself or herself to be a lover of film. Grave of the Fireflies falls into that exclusive category. The production is so emotionally challenging, however, that one time may be all that can be endured. Despite the artistry and care invested in the film’s crafting, the result is as close to traumatic as a movie can claim to be and watching it a second time is in some ways more difficult than the first. The power of Takahata’s vision is such that the initial reaction never fades. Grave of the Fireflies doesn’t need to be revisited to leave an indelible mark on the memory.