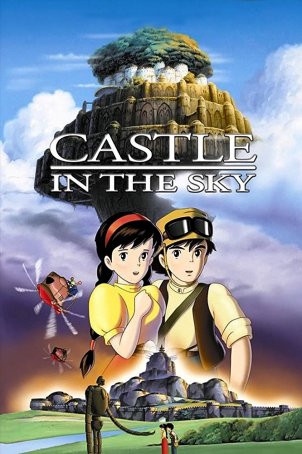 Castle in the Sky is the third feature film by the Japanese grandmaster of animation, Hayao Miyazaki, and the first movie released by Studio Ghibli. Despite being successful in Japan and cementing Miyazaki’s reputation in the worldwide animation community, Castle in the Sky never received a widespread theatrical U.S. release. The movie played in some North American festivals during the late 1980s but it was unavailable until 2003 when, after several delays, Disney made it available on DVD. A new Blu-Ray version, distributed by GKids, includes the original Japanese soundtrack (with subtitles) and the English-language dub.

Castle in the Sky may be the most straightforward action/adventure movie Miyazaki has made (and that’s saying something). It’s also the least thematically dense. Although there are echoes of anti-war and pro-environment messages, they are in the subtext. This is in contrast with many of Miyazaki’s later, better-known films (like Princess Mononoke). The director stated that his intention with Castle in the Sky was to make a film that children would enjoy. In that, he succeeded. To steal a phrase from a Christmas song, it works for “kids from one to 92” (although it might be considered a little scary for those on the lower end). 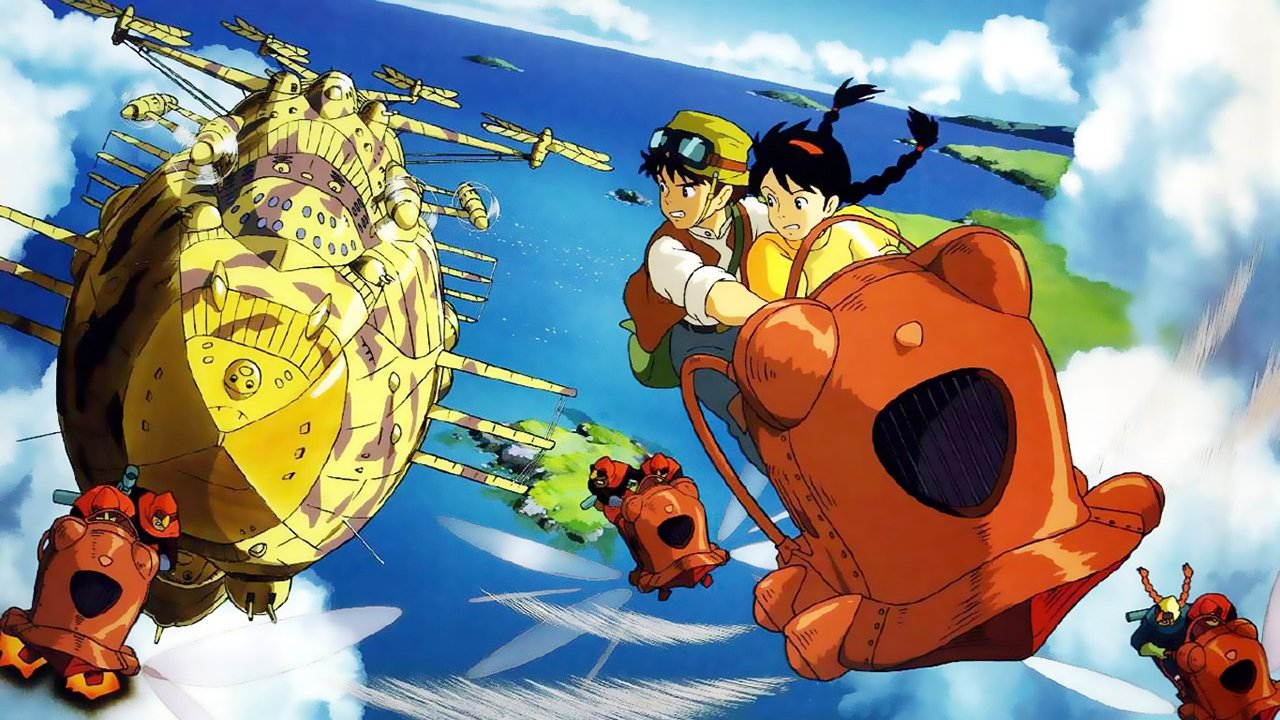 The story, which takes place on a cyberpunk-influenced alternate Earth, focuses on a girl named Sheeta (voice in the English dub provided by Anna Paquin), who has been kidnapped by a government agent named Muska (Mark Hamill) and is being transported via airship when it comes under attack by a group of pirates led by the cranky Captain Dola (Cloris Leachman). Their goal: a crystal amulet Sheeta wears around her neck. Attempting to escape from Captain Dola and her sons, Sheeta loses her balance and falls. The power of the amulet allows her float light as a feather to land, where she is rescued by the boy Pazu (James Van Der Beek), who brings her to his home.

Later, chased by the pirates and the government, they hide out in an abandoned mine. There they meet a bizarre old man who tells them tales of the floating island Laputa and the crystal that keeps it aloft (it happens to be the same kind of crystal in Sheeta’s amulet). After exiting the mine, the children are captured by Muska. He informs Sheeta of her destiny and demands that she send Pazu home (for his own safety) and accompany him on his quest for Laputa – a goal he expects to fulfill now that he has the amulet. 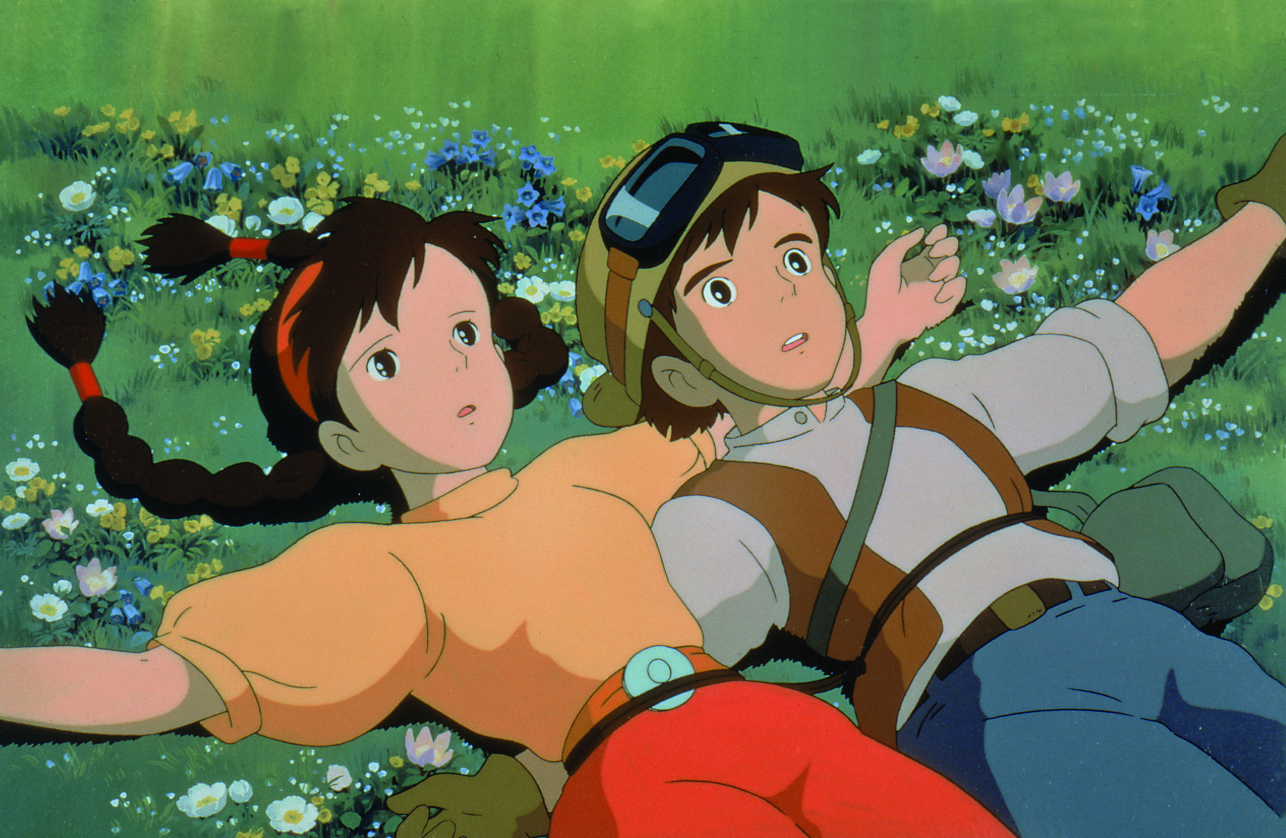 Viewed from a purely narrative perspective, Castle in the Sky is a fun, engaging two hours. Miyazaki knows how to keep things moving without belaboring certain scenes. He doesn’t speak down to his audience and isn’t afraid to mix in exposition with action. The movie contains strong fantasy elements but works in large part because the protagonists, Sheeta and Pazu, are recognizably human and relatable. Sheeta is abnormally strong and forthright for a girl in a mid-1980s movie (when films were almost universally targeting boys). She’s the hero and Pazu is the sidekick. Muska makes for a diabolical villain – bad to the core with no redeeming characteristics. The pirates exist in the gray, with Dola being a cross between mother hen and conniving witch.

The name and concept of “Laputa” come from Jonathan Swift. Indeed, many of Miyazaki’s influences are Western in nature. The army, for example, seems to be vaguely European (circa World War 2) in nature and the character designs are less traditionally “manga” and more universal. Often, it’s possible to make a stylistic determination that a type of animation originated in Japan, but that’s not the case here. The quality of the artwork is impressive – easily as good as anything coming out of Disney at the time. (The Black Cauldron being the contemporaneous release.) Cleaned-up for the recent Blu-Ray release, the images really pop. Lately, viewers have become so accustomed to CGI animation that watching a full-length hand-drawn feature triggers equal parts astonishment and nostalgia. It’s like the difference between a photograph and a painting. Both have their strengths but there are times when artwork is preferable to realism. Throughout his career, Miyazaki has been known as anti-violence. Castle in the Sky is one of his least pacifist movies, with the heroes using guns and an exceedingly large body count. (Mostly “bad guys” but still…) By the standards of most modern cartoons, Castle in the Sky is by no means exceptionally or gratuitously violent but it offers a different flavor than some of Miyazaki’s later films. This is a product of pure storytelling; he injected his views more forcefully into many of his other projects.

Which is the preferred version to watch (since both are available): the dubbed version or the subtitled one? To present a little history, when the dubbed version was first made available in 2003, there were significant alterations to the original soundtrack, including a reworked score (orchestral instead of electronic) and a lot of unnecessary background chatter. For the 2010 release, the dub soundtrack had been remastered to bring it closer to the Japanese version. Unfortunately, “dubtitles” (subtitles based on the dub-script rather than the original language script) were used for the Japanese option. The Blu-Ray utilizes the 2010 English-language dub with new subtitles for the Japanese-language soundtrack based on the original script. Which is “better” is determined by your preference. Purists will always prefer the original, but there’s nothing wrong with the English dub. The actors do fine jobs and, especially for younger viewers, there’s no writing/reading to distract from the story. Both are available so there’s no need to sacrifice one for the other. Castle in the Sky is a good enough film to benefit from multiple viewings. And, for anyone unfamiliar with Miyazaki’s canon, it provides a great introduction to a wonderfully rich animated catalog.