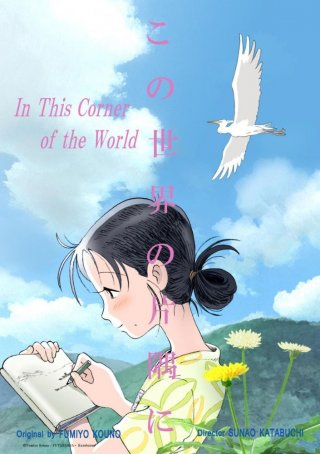 In This Corner of the World is as atypical an animated feature as one is likely to find washing ashore in the United States. Although fare of this sort – hand-drawn, serious-minded, narrative-based – is common in Japan, where Studio Ghibli has dominated the landscape for decades, it is virtually unknown (except on the art-house circuit) in a country where Disney, Pixar, Dreamworks, Illumination, and their ilk have molded expectations. Based on the manga by Fumiyo Kono, which ran weekly from 2007 through 2009, In This Corner of the World offers an episodic look at World War II-era Japan that provides a different portrait of the country than what’s typically available for Western consumption. Eye-opening and humanizing, the film focuses not on the Japanese war machine but the innocent peasants who bore the brunt of what their government unleashed.

In This Corner of the World has been released unchanged from the version that opened in Japan with the only concession to an English-speaking audience being subtitles. As such, there are times when it can be challenging. This is in large part due to cultural differences and historical/geographical knowledge. The movie frequently jumps forward in time and it can be difficult to figure out the relationship between certain characters and whether certain scenes are intended to be dream/fantasy sequences. This barrier is by no means insurmountable but it will require attention and dedication from an American viewer. (Full disclosure: I watched the film twice to make sure I understood everything after being a little uncertain following the first viewing.) 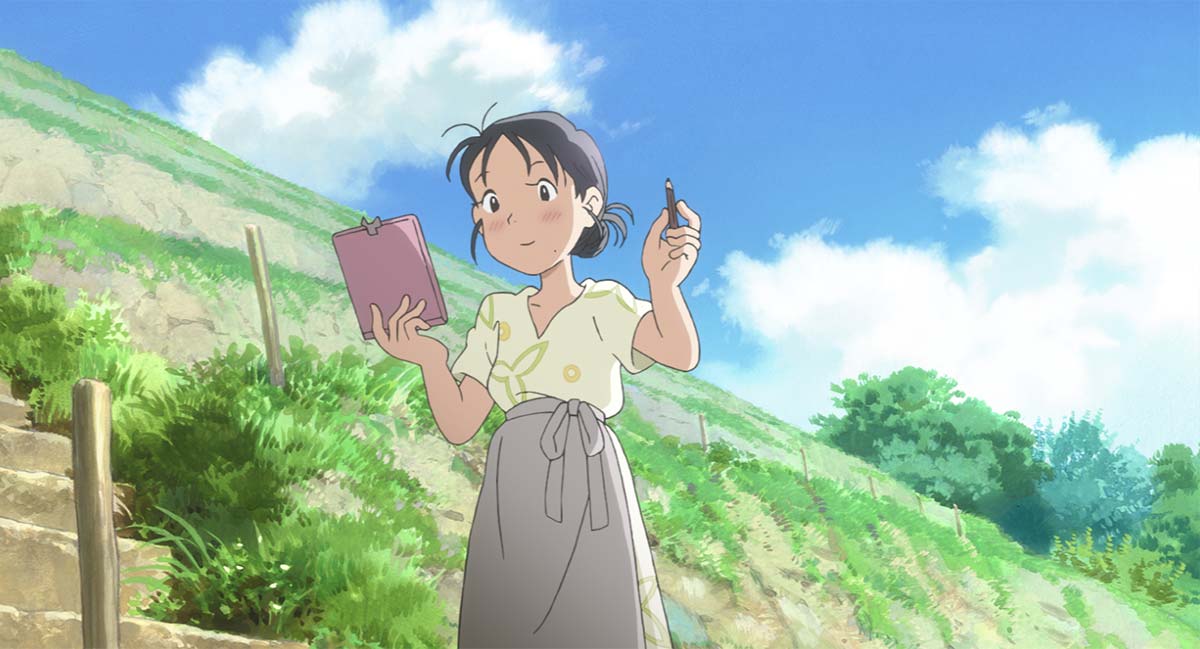 Although the first few scenes transpire in the early 1930s, the bulk of the narrative takes place in 1944 and 1945. 18-year old Suzu (voice of Rena Nounen) has traveled from her hometown, the fishing village of Eba in Hiroshima City, to the nearby harbor city of Kure, where her husband, Shusaku (Yoshimasa Hosoya), lives. After marrying him, she moves in with her mother-in-law, father-in-law, and widowed sister-in-law, Keiko (Minor Omi). Although she is kindly regarded by the older couple and adored by Keiko’s six-year old daughter, Harumi (Natsuki Inaba), her husband’s sister takes an instant dislike to her.

Most of the movie chronicles the everyday trials and tribulations of living in wartime Japan. Initially, the biggest impact is food rationing (there are several cleverly conceived scenes in which Suzu is shown making the most out of limited supplies). However, since Kure is the largest port for the Imperial Navy, combat is inevitable. Although shelters are built, by the time the bombs start falling, the devastation is widespread. Air-raid warnings and evacuations become daily occurrences. Tragedies happen – people die and are injured. In This Corner of the World is at times emotionally brutal. Then, on August 6, 1945, Little Boy is dropped on Hiroshima and everything changes.

The screenplay was written by director Sunao Katabuchi and his wife, Chie Uratani. A portion of the budget came from crowdfunding and the film’s production took over three years. In addition to wanting to achieve a particular “look” for the film, Katabuchi strove for realism. To that end, he used photographs (both contemporary and historical) and eyewitness accounts to recreate places that no longer exist.

The animation is hand-drawn and of a complexity a step down from what we have come to expect from Japanese exports (mostly Studio Ghibli/Hayao Miyazaki productions). Many of the backgrounds look likely richly drawn paintings and the characters are effectively rendered but budgetary and technical limitations are evident. There’s a certain charm to seeing hand-drawn animation in an era when so much screen art is made on a computer but there are times when the style seems a little Spartan. The voice acting is strong and no English redubbing was done (a preference for purists).

In This Corner of the World has been given a PG-13 rating by the MPAA in large part because of images that arise during the movie’s final 30 minutes. Katabuchi doesn’t hesitate when it comes to depicting the devastation rained on Kure by conventional bombs and fighter strafing runs, but the movie’s most difficult visuals result when the “camera” takes us to Hiroshima. One can argue that the dropping of the bomb was a necessity but that doesn’t remove the human toll of misery that resulted from it. For an American/international audience, perhaps the most important contribution provided by In This Corner of the World is one of perspective. It feels foreign to see a war movie in which the Japanese are portrayed as vulnerable and human and American airplanes become the faceless enemies. This reflects that, regardless of who wins and loses in a war, there are victims on both sides and those who pay the highest price are often those with no say in whether or not to fight.