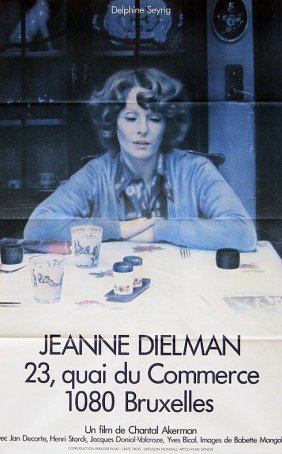 Jeanne Dielman (full title: Jeanne Dielman, 23, Quai du Commerce, 1080 Bruxelles) functions equally as a fascinating, at times mesmerizing time capsule, and an endurance trial. Clocking in at 202 minutes, the movie would be difficult enough to sit through if it was chock-full of suspense, action, and thrills. It contains none of those three elements. Instead, it offers viewers an opportunity to spy (like the proverbial fly-on-the-wall) on the everyday existence of one woman: Jeanne Dielman (Delphine Seyrig).

For three days, with many sequences occurring in real time, we watch through a portal on the day-to-day activities of single mother Jeanne as she cooks, cleans, and prostitutes herself to make the cash necessary to maintain her existence. She cares for her son, Sylvain (Jan Decorte), making him meals and admonishing him not to read at the table. By the end of the movie, she has become a little unglued and blows a gasket, murdering a client after he gives her an orgasm. It’s the only time when Jeanne Dielman comes close to a traditional movie moment, although it is presented in the same low-key, matter-of-fact fashion as everything that precedes it. One can posit an explanation for Jeanne’s violent action: after being inoculated from strong emotion by the day-to-day monotony of her life, the sudden rush of physical sensation overwhelms her and causes her to act irrationally, lashing out at the embodiment of the thing she dislikes the most about her existence. 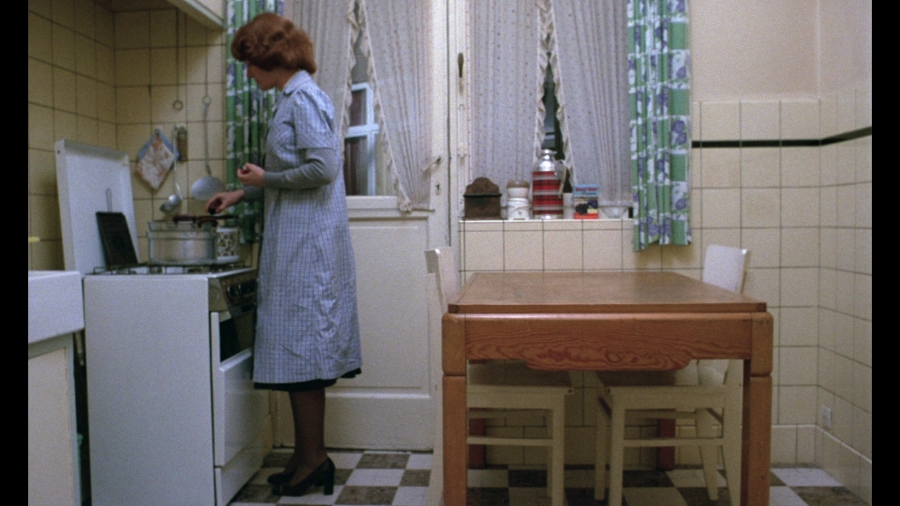 In the late 1990s, as the Internet was transitioning from a workplace curiosity to a part of daily living, a number of early webcam pioneers began broadcasting their lives on-line for curiosity-lookers to watch. Many viewers, undoubtedly lured by the expectation of nudity (which was usually delivered, albeit in short bursts), found themselves oddly entranced by the experience of watching, even if all the subject was doing was sitting at a computer. Most of these early, 2 fps shows were fascinating because of the reality they projected – a window into another person’s life. Internet voyeurism was born. 1998’s The Truman Show and 1999’s EdTV provided Hollywood’s take on this phenomenon. One wonders whether anyone involved in those movies had recognized that Chantal Akerman had blazed a trail a quarter century earlier before computers and home video.

Jeanne Dielman takes its voyeuristic perspective seriously. No movie has so rigorously applied the fly-on-the-wall point-of-view to this extent. Static cameras are set up at various locations around the apartment (and, on those occasions when Jeanne goes out, at fixed locations along her route) to record any action that occurs in front of them. Traditional cinematography is entirely abandoned. There are no establishing shots or close-ups. At times, the images are of empty corridors or rooms, with sounds indicating something is happening off-camera. At no time do any of the cameras move. A cynic might remark that Akerman’s approach is to stick a camera on a tripod, point it at a room, wander off, and come back in 11 minutes. 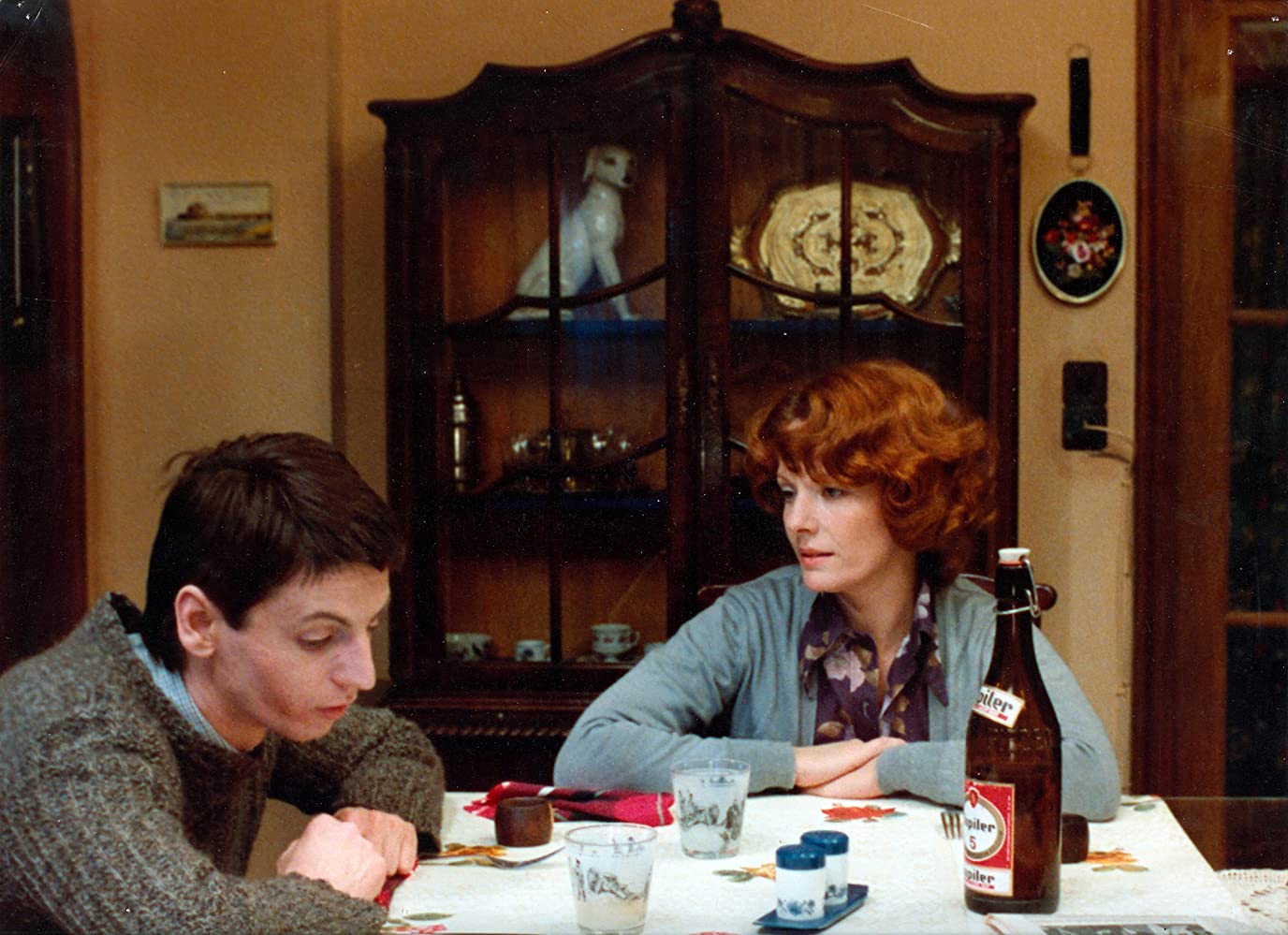 For a while, the experience of watching Jeanne as she goes about her daily routine is a novelty. Many of the scenes Akerman captures are those that would either be eliminated or shortened by even aggressively artistic filmmakers. Over time, however, the absorption gives way to tedium. Most people watch a movie to see something new or unique, to visit a new world or experience something unlike the dullness of everyday activities. Jeanne Dielman celebrates the ordinary in a way that requires extreme patience. The movie is nearly 3 ½ hours long and nearly every moment is inherently non-cinematic. Even the murder is presented in such a way that even a hint of melodrama has been leeched out. At one hour in length, Jeanne Dielman might have been an intriguing distraction; at 200 minutes, it’s almost indigestible in a single chunk.

Those watching Jeanne Dielman with a prurient mindset may be disappointed.  Although the movie follows Jeanne into the bathroom for a lengthy nude scene, it is decidedly unerotic. What’s more, the act of watching a woman bathing feels almost…creepy. Most of the time, screen nudity occurs with the knowledge (sometimes subconscious) that the actress is performing. The level of realism in Jeanne Dielman is so strong that the viewer may feel like a peeping Tom, an uninvited watcher hiding behind the so-called “fourth wall.”

Surprisingly for a movie focused exclusively on one individual, character development is minimal. We never really come to know Jeanne. Sparse dialogue (like the reading out loud of a letter) fills in a few gaps (such as why she was married and what happened to her husband) but the movie is interested only in her “in the moment.” We see that she’s tied to a routine and observe what happens when the routine collapses. Akerman’s clinical detachment, however, prevents us from knowing or caring about Jeanne – even after spending 200 minutes in her company. 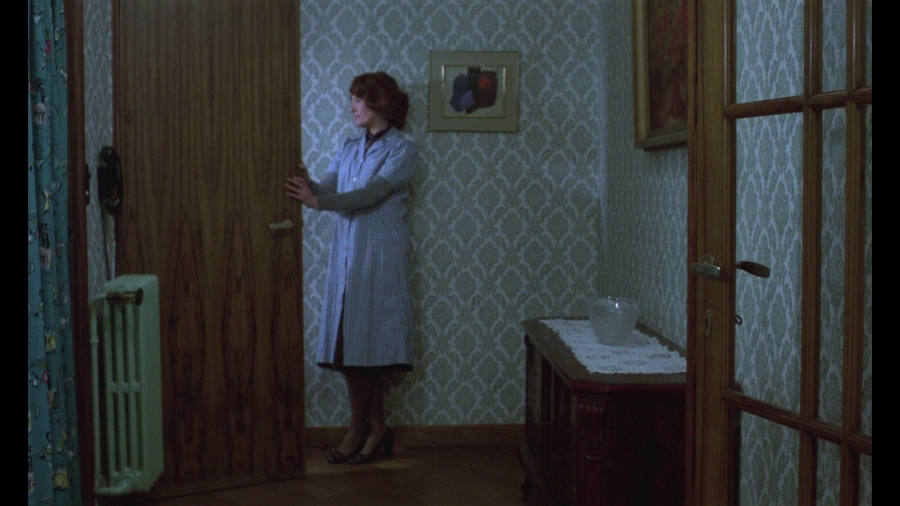 Jeanne Dielman was set and lensed in 1975 and, as such, it provides an unvarnished snapshot of the era that few period pieces can match. Those who weren’t born before that year may be surprised by the mundane activities represented herein (some of which, like using shoe polish, have vanished into obscurity). Those who remember 1975 may be rocked by a wave of nostalgia. I have often said that one of the unintended benefits of older, “realistic” films is the honesty with which they recreate the time period in which they were made.

At the time of its release, although hailed by many critics as being a groundbreaking expression of feminism (for its unvarnished focus on a female character who was neither a throwaway supporting figure nor a sex symbol in a movie written and directed by a woman), the film was unable to attract a U.S. distributor. As a result, it was denied a North American release until 1983 when New Yorker films organized an art-house run. Despite the widespread critical acclaim, Jeanne Dielman has never gained much traction outside of its niche audience in large part because it’s beyond a challenge to sit through. Being fascinating and unique, two qualities unquestionably in evidence here, don’t automatically deserve praise and, because of the film’s high quotient of tediousness, I find it impossible to recommend to any but the most devoted of experimental art film lovers. It works very well, however, as a cure for insomnia.