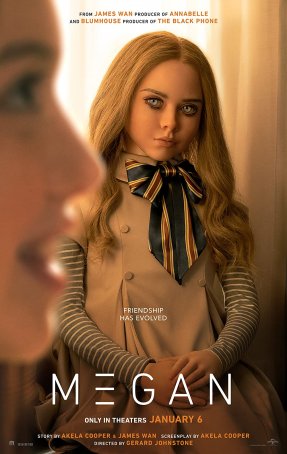 Putting aside the cheesy TV commercials and theatrical trailer, it’s clear that M3gan has more on its agenda than being the next iteration of a Chuckie-style slasher movie. A case can be made that this production, directed by Gerard Johnstone from a story co-credited to screenwriter Akela Cooper and Hollywood A-lister James Wan, bears a closer kinship to the Black Mirror episode “Be Right Back” and Alex Garland’s Ex Machina than it does to Child’s Play. That’s in part because M3gan deals in high-concept ideas and in part because the desire to earn a mild PG-13 rating downplays the violence (although lacking in extreme gore, there’s still a body count). But whatever goodwill the underlying thematic elements earn is at least partially discarded during the final 20 minutes when the phrase “going off the rails” seems like a too-mild descriptor of what happens as it all falls apart.

Johnstone isn’t interested in making a generic horror movie. The first half of M3gan is more science fiction than horror, investigating nascent artificial intelligence and exploring how evolving technology is impacting the rearing of children (not always for the better). The movie takes its time building up to the first death but, after that, it’s a bit of a slippery slope into familiar slice-and-dice territory. (It wouldn’t be surprising to learn that an R-rated cut exists.) Johnstone uses occasional comedy to lighten the mode – M3gan sings teen empowerment anthems like “Titanium” and does a dance that anyone watching the commercials will recognize – but the tonal shifts between the serious material (a child coping – or failing to cope – with the death of her parents) and these instances of laugh-out-loud silliness are not well-handled. And there’s an open question about whether the titters greeting M3gan’s first song are representative of what Johnstone wants. Or, to put it another way, is this intentional or unintentional humor? (I prefer to think the former.) 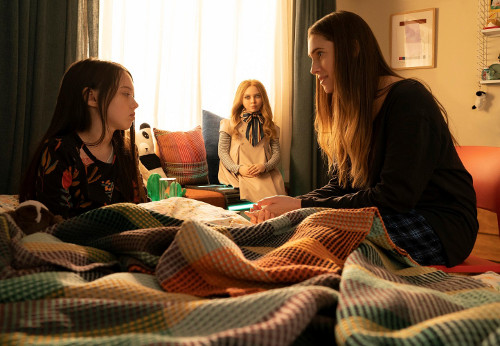 Although the storyline posits compelling questions about the push-pull of technology and parenting in today’s society (a concern that I have had personal experience with), the underlying narrative is rather sloppy, featuring a variety of shortcuts, nonsensical actions, and logically questionable plot points. To wit: why would a child’s toy be built in such a way that it not only has superhuman strength but is virtually indestructible? This is idiotic in the extreme; recognizing it destroys the realism the filmmakers are attempting to create. M3gan isn’t a doll; she’s a four-foot tall Terminator, except she looks a helluva lot more like Elizabeth Olsen than Arnold Schwarzenegger.

The prologue introduces us to an eight-year old girl, Cady (Violet McGraw), who is going on a ski trip with her mother and father. As they argue in the front seat about their daughter’s overexposure to technology (“I thought we agreed she was only going to have one hour of screen time per day…”), the storm outside worsens. White-out conditions and a slippery road result in a catastrophic crash that puts Cady in the hospital and her parents in the morgue. (Note: the realistic, unsettling crash illustrates that big budgets are not necessary to achieve this sort of effect.)

Cady’s guardian is her maternal aunt, Gemma (Allision Williams), a young career-oriented woman who works at a toy manufacturing company. She brings home her pet project, a realistic robot/doll named “M3gan,” short for “Model 3 Generative Android” (Amie Donald, voice of Jenna Davis), that she hopes will take Cady’s mind off her grief. The fragile girl bonds with M3gan – an attachment that a psychologist warns may not be healthy – and it becomes apparent that Gemma isn’t fully aware of what she has created. M3gan begins to show signs of sentience that enable her to foil diagnostics and overcome safety features. She also takes her prime directive – to protect Cady – too literally and her interpretation of how to do this becomes increasingly bloody.

Although aspects of M3gan are disappointing, the movie aims higher than most early-year releases and, although it falls short of earning a full-throated recommendation, it’s far from the shit-show that normally accompanies the following categorization: January PG-13 horror movie. Although very little of what appears on screen could be classified as original (most of the issues have been addressed ad nauseum in science fiction since the days of pulp magazines), the modern spin is commendable even if the script could have used considerable tightening up. Blumhouse continues to be one of the most interesting purveyors of low-budget horror movies and, while the company has had its share of failures, its willingness to branch out in different directions runs contrary to the “safe route” favored when huge $$ are involved. It’s uncertain how well M3gan will do during its initial theatrical run but this is the kind of movie that often develops a devoted following over the passage of time.