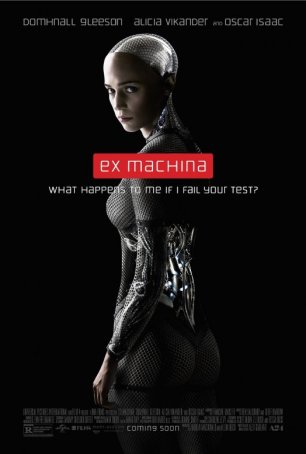 Artificial Intelligence has always been a common science fiction theme.  The Frankenstein-influenced concept of a human being giving life to a new entity - one that can think and act independently - has teased writers with its potential. Now, as we move deeper into the 21st century and technology speeds forward at a breakneck pace, the gap between the fiction in this concept and its parallel reality is closing.  Perhaps this is one reason why there has been an uptick in the number of movies with Artificial Intelligence as a plot point. The field isn't yet overcrowded (and, considering the richness of the subject matter, it may never be) but Ex Machina joins Her and Chappie as recent films that have explored these ideas. 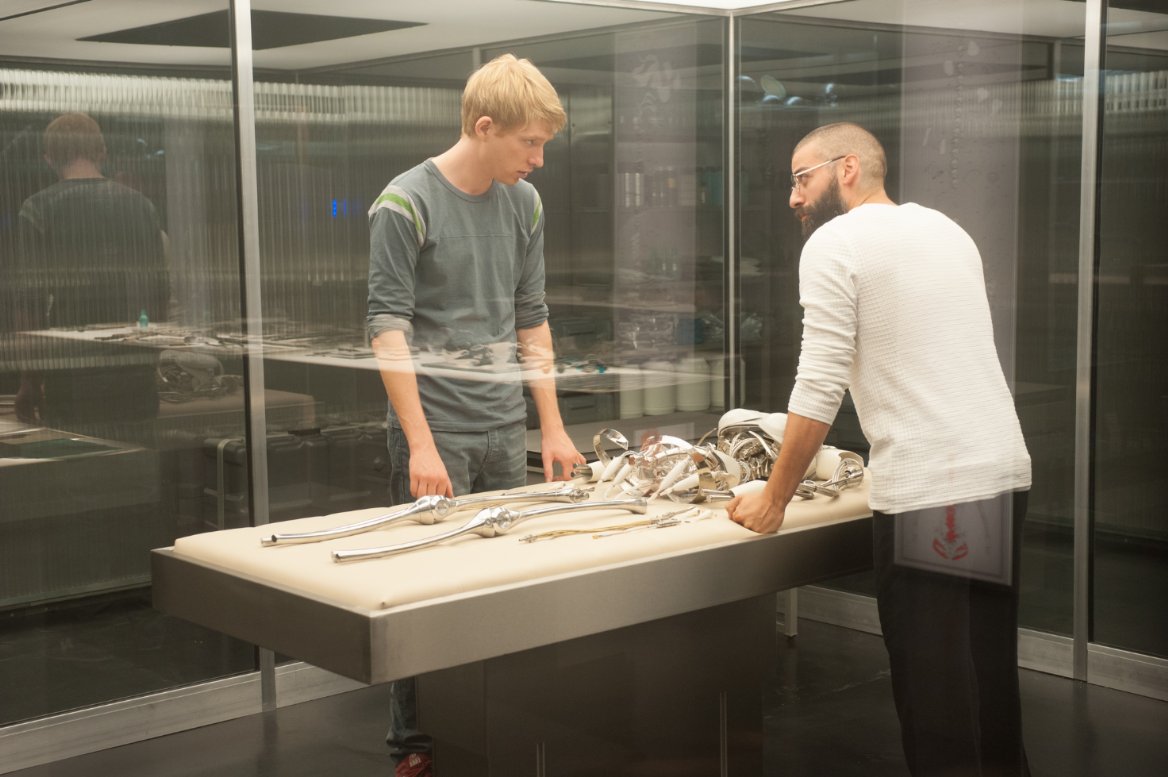 One of the most persistent and compelling questions about artificial intelligence is what it entails. At what point is consciousness achieved? When does an entity transcend the ability to do nothing more than follow complex programming and begin to think on its own? At what point does a machine cease to be a tool and earn the status of a "life form"? These questions lie at the heart of many stories about this subject matter and Ex Machina is no exception. Although the movie is principally about two human beings, the most intriguing character by far is the robot at narrative's center.

Her name is Ava (Alicia Vikander) and she is the latest in a line of A.I. prototypes developed by genius computer scientist and noted recluse, Nathan Bateman (Oscar Isaac). Bateman, the CEO of the world's biggest search engine company, runs a competition among his employees with the winner earning the right to spend a week with him at his remote estate. The lucky selectee is Caleb Smith (Domhnall Gleeson) but he doesn't learn until he reaches his destination that Nathan intends for Caleb's stay to involve more than conversation and observation. He wants Caleb to participate in a Turing Test - to interact with Ava and determine whether she can pass for a human. Caleb is astonished by how real Ava seems - so much so that he begins to wonder about the morality of Nathan's interactions with her. Caleb's feelings for Ava appear to be matched by hers for him, but is she truly experiencing emotions or merely mimicking them? And is he in control of the situation or is Nathan acting like a puppeteer, pulling not only Ava's strings but Caleb's as well? 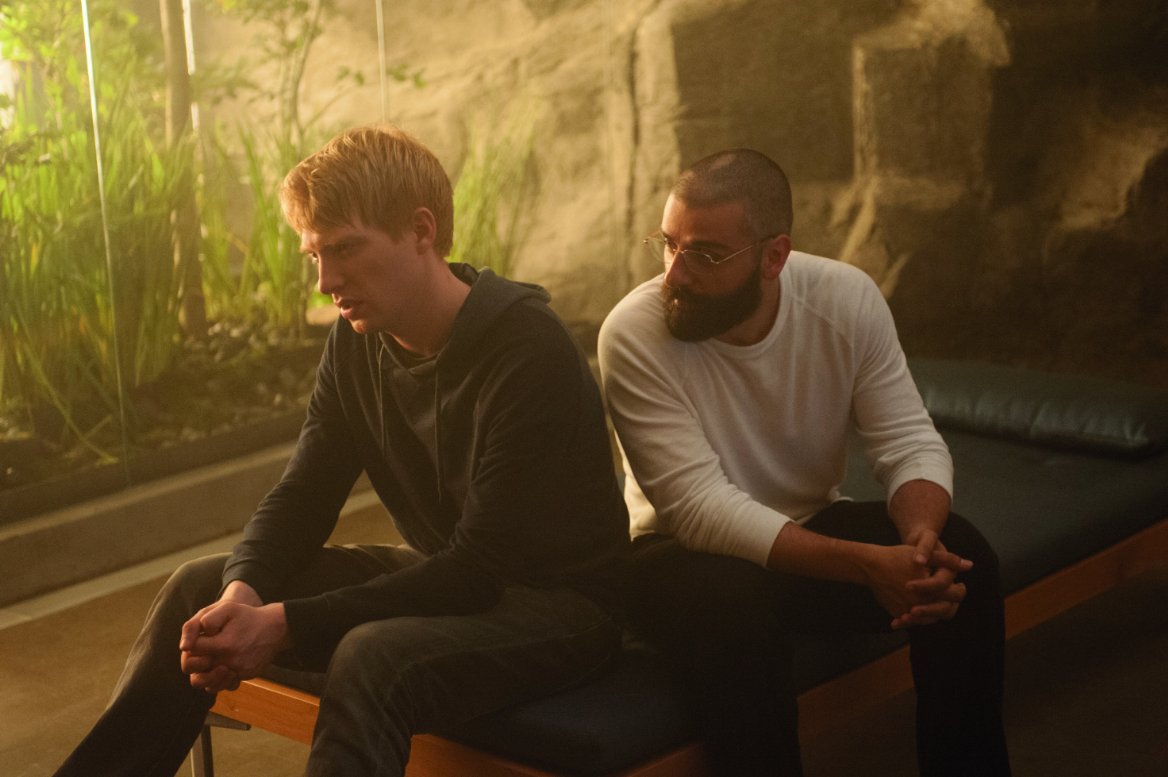 Ex Machina avoids the trap of becoming too technical. The storyline is straightforward and doesn't involve a lot of technobabble. Nathan doesn't spend excessive time explaining how he created Ava, although he mentions (to Caleb's dismay) that she will eventually be "killed" to make way for the next, more advanced prototype. To Nathan, creator-god, these machines are no different from any other advanced computer. He's interested in perfecting them but doesn't see them as unique life forms. To Caleb, the outsider, the truth is more fluid and Nathan's actions more questionable.

This is not an action-oriented science fiction film and, while some special effects are employed, they are limited and mostly low-budget. (Ironically, Gleeson and Isaac moved from this production to the new Star Wars film, where words like "limited" and "low-budget" don't apply.) Ex Machina focuses primarily on evolving its themes through interaction (between Caleb and Ava) and dialogue. The movie is broken into several "acts", each of which focuses on a session between Caleb and Ava who are separated by a clear wall - they can see each other and talk but not touch. Everything is monitored and Nathan looks on from afar, evaluating and judging. Director Alex Garland (the writer of several Danny Boyle films, making his feature debut behind the camera) builds a restless, unsettled tone. Aspects of the ending strain credulity while simultaneously crystalizing the themes Ex Machina has evolved throughout its 108-minute running time.

From a performance perspective, the most impressive acting is provided by Alicia Vikander (the Swedish actress who was recently in Seventh Son), who captures Ava's allure by presenting her as seemingly guileless with a difficult-to-pinpoint inhuman quality. Oscar Isaac plays a variation of the mad scientist role - more Dr. Moreau than Dr. Frankenstein. Nathan is unquestionably a genius but also quite possibly mad. He's a narcissist with a god complex who can be by turns charming and chilling. Domhnall Gleeson, whose star is rising, interprets Caleb as a flat and uninteresting individual, but that may be more a matter of Garland's intention than Gleeson's portrayal. And there is a kind of weird chemistry between Gleeson and Vikander.

Ex Machina employs fewer twists and one might expect, although there are some surprises along the way. For the most part, however, Garland is less interested in playing games with his audience's expectations than he is inviting viewers to sit beside Caleb and evaluate Ava. In the final analysis, the movie doesn't offer much about the subject that hasn't been previously explored, but the soil is fertile and many ideas germinate. This is a cautionary tale about where technology could be leading and its low-key, claustrophobic approach lends an immediacy that many bigger, grander spectacles lack.