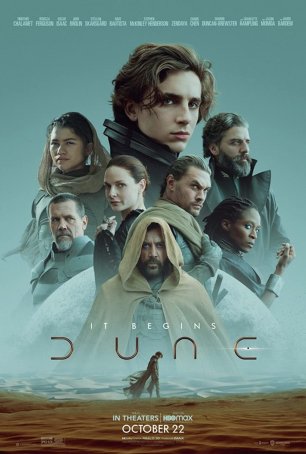 There’s a lot to like about this new version of Dune: the screenplay’s ability to pare down Frank Herbert’s complex, weighty novel without emasculating it, the epic scope, and the spectacle of the experience. Director Denis Villeneuve’s vision is evident in every frame. The movie, while adapted from the science fiction classic, has echoes of everything from Islamic mysticism to King Arthur to Lawrence of Arabia. At times, it achieves the feel of Star Wars (George Lucas credits the novel as one of his inspirations) and The Lord of the Rings.

As setup and the beginning of a broad epic, Dune: Part One is spectacular. It does a lot better than David Lynch’s 1984 misfire in establishing the universe and the characters who populate it. Notably, the politics are clearer but they don’t overwhelm the story as they seemed to in the earlier film. Top-notch special effects bring the world of Arrakis/Dune alive in a way that has never previously been possible. This is as much a big-screen spectacle as anything released today. It gains scope and immersivity when displayed in an auditorium. I have some issues with the sound mixing, which seems to have been influenced by the Christopher Nolan technique of occasionally rendering dialogue indecipherable (Hans Zimmer’s soaring score is sometimes too loud, although I’m willing to concede that could have been related to the venue in which I saw the movie). 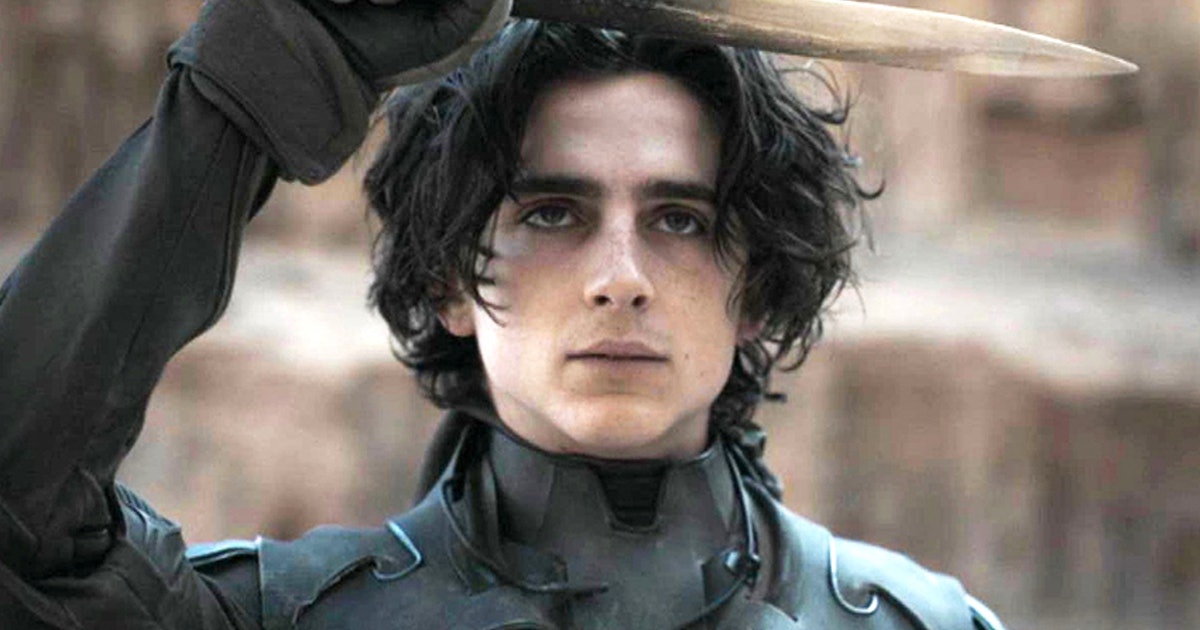 Those familiar with Herbert’s novel, which has taken its place as one of the great classics of the genre since its late-1960s publication, will feel at home here (more so than was the case with the 1984 film, although a 2000 TV mini-series did a credible job of sticking to the source material). Dune: Part One retains most of what works in a visual medium while shedding elements more germane to the written one. As such, Villeneuve’s movie complements but doesn’t replace the book, much as was true of Peter Jackson’s Lord of the Rings trilogy.

Dune establishes the foundational elements of the tale in an economical fashion, informing viewers that the spice melange is the most valuable thing in the universe – a substance critical to interstellar travel because it allows navigators to fold space; it also extends lifespan and vitality while having psychotropic effects. Duke Leto Atreides (Oscar Isaac), the head of House Atreides, has been tasked by the Emperor with the rulership of Arrakis, the only known planet where spice can be mined. The decree deepens the enmity between House Atreides and its historical enemy, House Harkonnen, and we soon learn that the true goal of the Emperor is to destroy House Atreides, not elevate it. 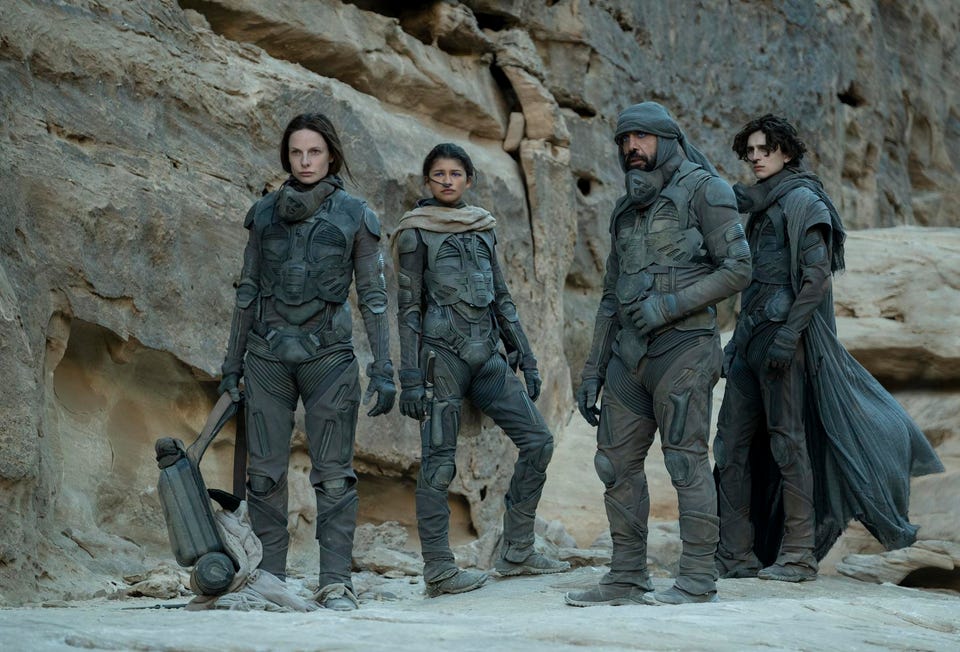 Leto is hopeful that he can prepare a defense before the trap is sprung, although he underestimates both the scope and nature of the forces arrayed against him. His goal is to make contact with the Fremen, men and women who inhabit Arrakis’ deserts, and form an alliance with them. To this end, he travels to his new fiefdom in the company of his concubine, Lady Jessica (Rebecca Ferguson), a “Bene Gesserit Witch” whose psychic powers give her great insight and mind-control; his son, Paul (Timothee Chalamet), who may or may not be the “messiah” figure predicted by Fremen and Bene Gesserit prophesies; and valued fighting men Duncan Idaho (Jason Momoa) and Gurney Halleck (Josh Brolin).

Once on Arrakis, Paul discovers the physical difficulties of life there. The days become so hot that survival is impossible outside unless one wears a life suit that captures and recycles sweat. Giant worms lurk beneath the surface, always a danger to the unwary. And spice affects him in peculiar ways, enhancing dreams. In particular, he has visions of a young Fremen woman, Chani (Zendaya), whose actions confusingly promise love and betrayal if taken at face value. 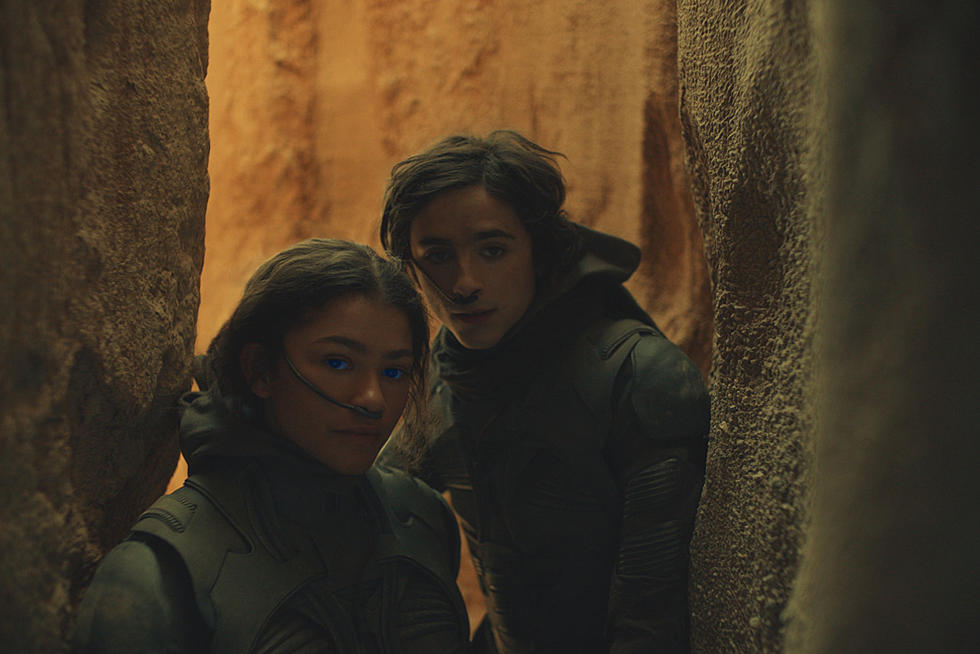 To make this movie, Villeneuve has recruited a high-profile cast. Timothee Chalamet, one of today’s rising stars, makes an appealing Paul – a character whose powers are counterbalanced by his vulnerability. Although Zendaya’s screen time is limited (Chani’s in-the-flesh participation is restricted to the film’s final 30 minutes), she adds a spark to the proceedings and exhibits chemistry with Chalamet. “Name” actors fill supporting roles: Oscar Isaac, Rebecca Ferguson, Jason Momoa, Josh Brolin, Javier Bardem (as the Fremen Stilgar), Stellan Skarsgard (as Baron Harkonnen), Dave Bautista (as Harkonnen’s nephew), and Charlotte Rampling (as the Reverend Mother). Some of the actors are underused but that’s the nature of the beast. (It’s no surprise that many of the cast members are veterans of earlier big-budget endeavors, with roughly half of them having appeared in MCU/Star Wars/DC films.)

In crafting the film, Villeneuve is at the top of his game. The action sequences are well choreographed and shot, using suspense and intensity as leavening factors. Information dumps are kept to a minimum and there is little wasted time (finding the right point for a bathroom break – something possibly necessary in a film this long – may be a challenge). For what we get, Dune: Part One is a great ride. Until it stops, right in the middle of the story, with character arcs unfinished and the overall narrative paused. For those unwilling to “cheat” by reading the novel, it’s going to be a long two years until the arrival of Part Two.