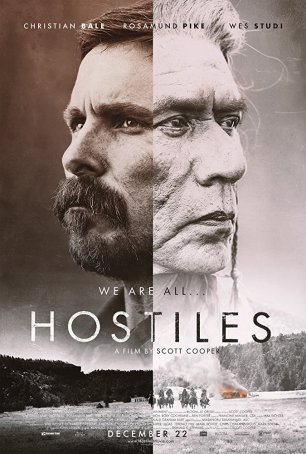 Hostiles is an occasionally shocking, sometimes disturbing, but ultimately hopeful perspective of how the deepest of racial divides can sometimes be bridged by the simplest of actions: taking the time to relate to the other person as a fellow human being rather than as a symbol of hatred. The movie, written for the screen and directed by Scott Cooper (who helmed Jeff Bridges’ Oscar-winning performance in Crazy Heart), is careful not to demonize anyone and make the path to redemption both slow and methodical. The final scenes seem earned rather than the result of a script forcing characters into particular situations.

Hostiles opens with a punch to the gut. Typically, dogs and children are safe from overt violence in films concerned about alienating viewers. There are no dogs in Hostiles but there are children and three of them (including one infant) are dead five minutes into the film. Rosalie Quaid (Rosamund Pike) loses her entire family in one violent attack on their homestead by a Comanche raiding party. The year is 1892 and the frontier is disappearing but acts of wanton violence are not unheard of. 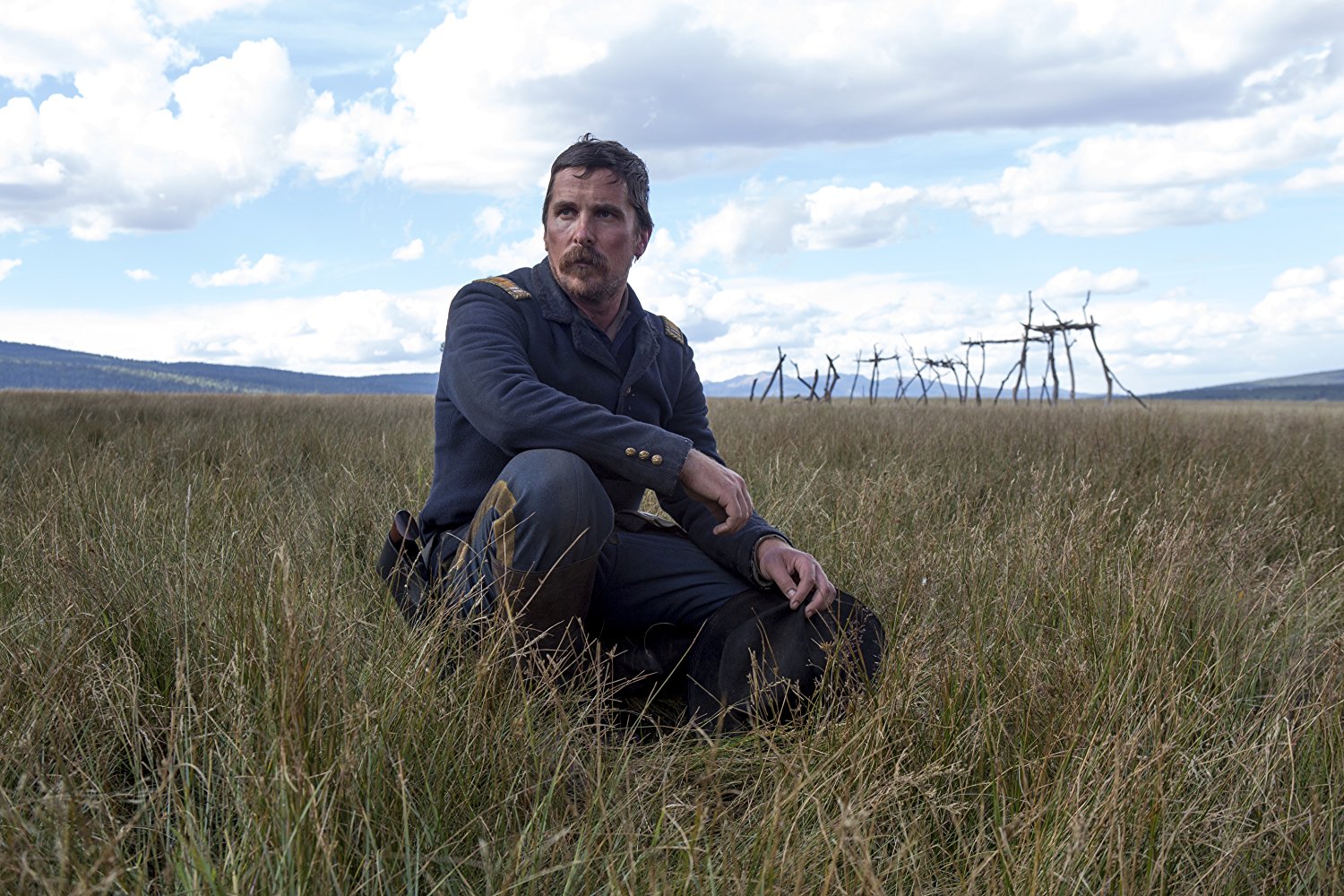 The scene switches to a fort in New Mexico where Captain Joseph Blocker (Christian Bale), one of the staunchest anti-Native American fighters in the so-called “Indian Wars”, is given the unenviable assignment of escorting the cancer-stricken Cheyenne war chief Yellow Hawk (Wes Studi) back to his home territory in Montana to die. Blocker, a shell of the person he once was, initially refuses. In his view, Yellow Hawk is a savage butcher. (He wouldn’t be surprised to learn that many Native Americans use the same description for him.) However, when his commanding officer (Stephen Lang) threatens him with a court martial, he has no choice but to agree. So, accompanied by four hand-picked soldiers (Rory Cochrane, Jonathan Majors, Jesse Plemons, and the suddenly ubiquitous Timothee Chalamet), he begins the journey north alongside Yellow Hawk; his wife, Elk Woman (Q’orianka Kilcher); his heir, Black Hawk (Adam Beach); and his two younger children.

The film is set up as a road trip with various incidents happening along the way. The first is when Blocker’s band encounters the burnt-out remnants of the Quaid house with Rosalie inside. She comes along with them. The second is when, after stopping at an army outpost, Blocker agrees to transport a criminal, Philip Wills (Ben Foster), to Montana to face justice for his crimes. Wills, who served under Blocker during several bloody engagements, is disappointed to see the anti-Native American sentiment no longer burning as brightly in his former commander’s soul. The third occurs at the end of the trip when the slow process of redemption demands that Blocker act decisively.

Hostiles is a difficult film with as dour and dreary a tone as one is likely to find. Cooper doesn’t cheapen the subject matter by introducing “lighter” moments that would seem inappropriate. This is an entirely serious movie about important matters. In one scene, when Blocker and Rosalie share a tent, their intimacy (which doesn’t include anything overtly sexual) isn’t about romance – it’s about two lonely and broken souls reaching out in the dark of the night.

For the most part, Yellow Hawk is silent. With death fast approaching, he has reached the realization that is slow in coming for Blocker. When his escort joins him in that existential place, they have a brief conversation. Both acknowledge that the past is just that – the past – and that the present and future require something different from them. They have done bloody, awful deeds but the time has come for them to move forward.

Hostiles is constructed like a Western. It looks like a Western. It has all the trappings of a Western. There are soldiers and Native Americans, shootings and scalpings, and a general sense that, although civilization may be coming, it’s not there yet. But this is really a morality play that has much in common with the so-called “revisionist” Westerns of recent years. It wouldn’t be unreasonable to throw out titles like Dances with Wolves, The New World and, more recently, The Revenant when discussing Hostiles. Studi appeared in the first two of those. Q’orianka Kilcher and Bale were Pocahontas and John Rolfe in The New World. And the tone matches the bleakness of the one established two years ago by Alejandro Gonzalez Inarritu.

Few actors can do soul-sick weariness with the force of Bale, who honed his familiarity with it in three unconventional Batman movies. Like Michael Corleone in The Godfather Part III, Blocker wants out but they won’t let him go. Wes Studi brings gravitas and nobility to a role that has few lines but great importance. Rosalind Pike has some of the film’s most emotionally challenging scenes and is as deserving as any other actress to be on a 2017 Supporting Actress short list.

Hostiles isn’t for everyone. It demands from its viewers not only an appreciation of the Western as a genre but a willingness to experience some difficult and unpleasant scenes. It is emotionally intense but the catharsis is worth the investment. Most importantly, during a time when racial animosity has been elevated to a high level, this film offers insight into how such a seemingly unbridgeable gap can be closed…if the participants are willing to take the steps.