The movie referred to since 1981 as A New Hope has two separate identities. As Star Wars, it’s a stand-alone coming-of-age tale of a farmer who follows his destiny to rescue a princess and defeat an evil empire. As Episode IV, it’s the fourth chapter of an epic space opera that spans decades and light years while pitting good against evil. The film’s two identities are compatible but highly influenced by when the viewer first saw the movie. Those in the under-40 age bracket almost certainly see A New Hope as part of a larger saga. Those who were old enough to see (and appreciate) George Lucas’ signature motion picture during its 1977 run (or subsequent 1978/79 pre-Empire re-releases) will forever be able to treasure the memory of when there was only Star Wars.

A New Hope’s greatness stems in large part from the era in which it was created. Those new to the series may wonder at older fans’ awe. The special effects are the least impressive of those in hexalogy. The storyline is straightforward and more than a little clichéd. The acting varies from capable (Alec Guinness, Peter Cushing) to inexperienced (Mark Hamill, Carrie Fisher) to stiff (Harrison Ford). The dialogue is loaded with “Lucas-isms.” Yet, for all those flaws, A New Hope is a great movie. It’s not as ambitious or accomplished as The Empire Strikes Back or Revenge of the Sith but there’s something unaccountably charming about its purity. I won’t deny that nostalgia plays a big part in this but, to an extent, that’s the currency of movies. We bring our own memories and experiences to every film we see and, when we re-watch something, our remembrance of “the first time” informs subsequent viewings. Every time I sit down to re-experience Star Wars, a part of me is lying in the back of a station wagon on a warm summer evening at a drive-in in Atco, NJ. 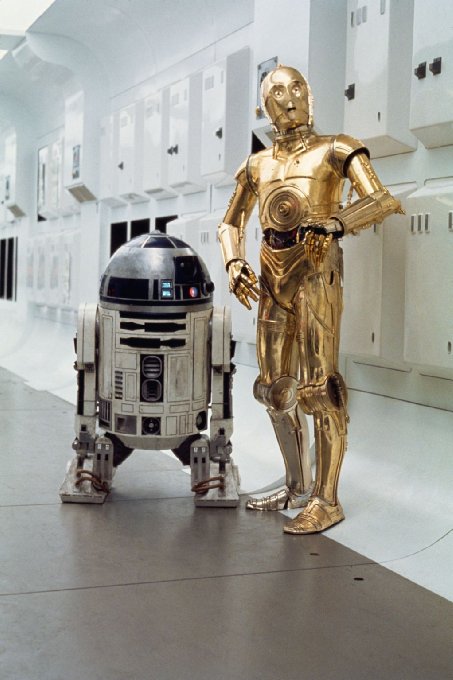 For the most part, A New Hope remains largely the same as when it was called Star Wars. Yes, in 1997, Lucas went back and tinkered with it a little. The “Special Edition,” initially hailed as a triumph, has become a focal point for the ire of some fans since Lucas’ preference for the “improved” version has led to the original theatrical cut being (largely) unavailable. The differences, however, are small, bordering on insignificant. Some special effects scenes were cleaned-up (matte lines removed), a few CGI-enhanced inserts were added, the Han/Jabba scene was retrieved from the cutting room floor (where it arguably should have remained), and (most controversially) it was decided that Greedo would shoot first. 95% of the film is unchanged and I’ve never found the new material to be more than a curiosity or minor distraction. The issue for die-hard fans isn’t the existence of the “Special Edition” but the unavailability of the original cut. (I expect Disney and Fox to rectify this within the next 12 months. After all, there’s money there.)

Narratively, there’s not a lot of complexity to A New Hope. This isn’t a criticism; there are times when story simplicity (as opposed to story stupidity) is a desirable trait. It allows us to concentrate on other things.  A New Hope is about the quest of farm-boy Luke Skywalker (Mark Hamill) to escape from his humdrum life and become a fighter pilot. He doesn't want to be just another bystander while the struggle for freedom goes on all around him - he wants to be a participant but Uncle Owen Lars (Phil Brown) encourages him to stay grounded and not follow in the footsteps of his dead (?) father, Anakin. When two droids, the prissy C3PO (Anthony Daniels) and indomitable R2D2 (Kenny Baker), carrying a secret message from a beautiful rebel princess, Senator Leia Organa (Carrie Fisher), fall into his hands, his chance arrives. Amidst of the dunes of Luke's home planet of Tatooine, the young man meets the aging Jedi Knight, Obi-Wan Kenobi (Alec Guinness), who teaches of the mysterious Force, a mystical energy field that binds together all things in the universe. In the wake of the murder of Uncle Owen, Obi-Wan convinces Luke to join the droids and him on a mission to rescue the princess. Accompanied by a cynical smuggler, Han Solo (Harrison Ford), and his first mate, the hairy Chewbacca (Peter Mayhew), the odd little group blasts off into space with agents of the corrupt Galactic Empire in pursuit. Their destination: the dreaded Imperial Death Star, a confrontation with the evil Darth Vader (David Prowse using the voice of James Earl Jones) and the cold Grand Moff Tarkin (Peter Cushing), and motion picture immortality.

At the time when Lucas made Star Wars, there was little thought of a second installment. The writer/director had ideas about where the story could go but the movie was constructed as a stand-alone production (albeit with enough of an open ending to allow for a continuation). Of all the Star Wars movies, this is the only one that functions as a self-contained story. It is fully satisfying in and of itself - something that can’t be said of the arguably better Empire and Revenge.

A New Hope was greatly influenced by Joseph Campbell’s The Hero with a Thousand Faces, in which the author explores the concepts of monomyth and “the hero’s journey.” In making Star Wars, Lucas was keenly aware that he wasn’t so much breaking new ground as repackaging familiar themes and tropes for a new audience. He also borrowed heavily from other sources: the serialized adventures of Flash Gordon and Buck Rogers, Arthurian legends, and Akira Kurosawa’s The Hidden Fortress (C3PO and R2D2 are based on the characters of Tahei and Matakishi). Westerns inspire some of the shoot-outs and the dogfights echo World War 2 movies. A New Hope functions as a glorious blender, taking all these diverse antecedents and creating something that inspired a generation.

Eye candy was undoubtedly one of the reasons for the initial popularity of Star Wars. Sure, viewers loved the characters and the unabashedly heroic story but the movie wouldn’t have been a runaway success if the special effects hadn’t truly been special. Star Wars opened the curtain on the great late-‘70s/early-‘80s visual effects revolution, the first of two modern waves that changed how movies were made. Seen today, the futuristic scenes in A New Hope look almost primitive (although more than serviceable) but audiences in 1977 had never experienced anything like this. A mere three months prior to the release of Star Wars, King Kong won the VFX Oscar. I have a soft spot for Dino DeLaurentiis’ monster movie, but the effects work in that film was shoddy. Star Wars redefined everything.

How does A New Hope stand up all these years later, especially now that it exists not in a vacuum but as part of a larger whole? The answer is: extraordinarily well. Star Wars deserves the “classic” label because, even 40 years beyond its unveiling, it has lost none of its power. Its timelessness is unquestioned. The setting deflects anachronistic distractions that plague other sci-fi tinged space operas (Star Trek being a prime example). A New Hope opens up a hitherto unvisited universe and populates it with identifiable characters (many of whom are archetypes) while establishing a rich mythology. Lucas was so infatuated with the background story of A New Hope that he devoted three movies to it. Admittedly, there are some chronological discrepancies between A New Hope and the other films. Some have been successfully rationalized away (like Vader being Luke’s father - obviously not in consideration when Star Wars was written). Others (the aborted Luke/Leia romance, for example) stand uncontested. None of these are flaws of A New Hope, however, but represent inevitable continuity glitches that occur when a universe expands. 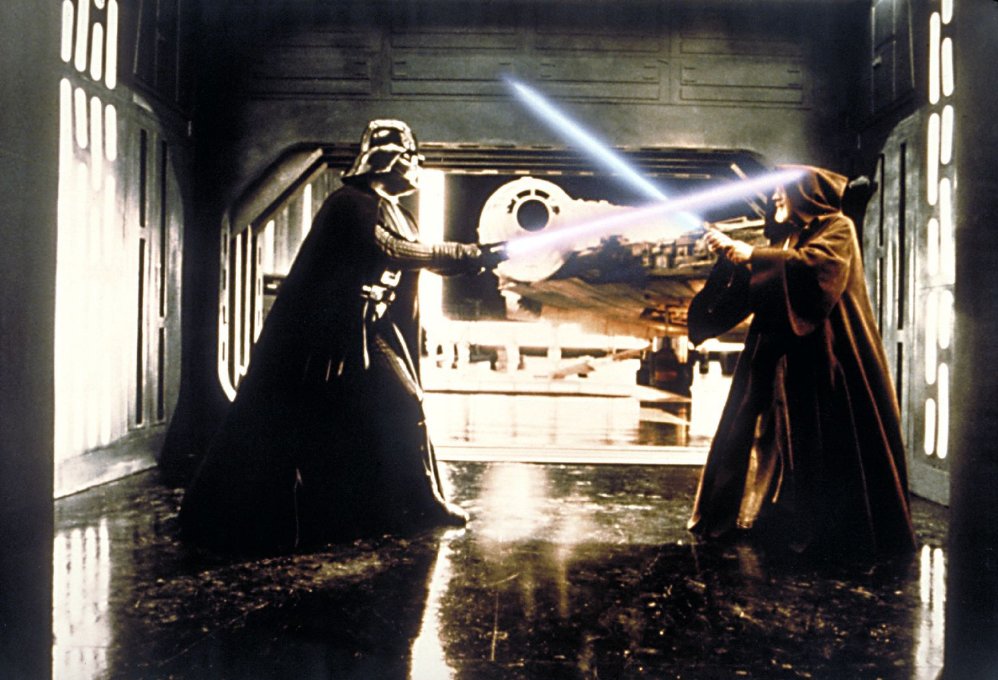 A New Hope picks up nicely after Revenge of the Sith, catching up with the surviving characters two decades later. This is the next pivotal point in the saga’s development, with Obi-Wan about to reunite with Luke and Leia as they spearhead a rebellion against the Empire their father helped create. The lightsaber re-match between Vader and Obi-Wan isn’t nearly as energetic as their previous confrontation on Mustafa (hey, they’re both older) but that matters little. And, although the Empire suffers a blow with the destruction of the Death Star, it is far from finished, as we see in The Empire Strikes Back.

Lucas was canny in selecting his actors. The three leads are played by “fresh faces” (with only Harrison Ford having name recognition courtesy of his role in American Graffiti) - what they lack in acting expertise is made up for by their enthusiasm. Hamill isn’t the most polished performer but he makes Luke likeable. Carrie Fisher with her iconic hairstyle became the instant subject of a million schoolboy crushes. And Harrison Ford started his climb toward A-list status with a deliciously cocky attitude to camouflage corny line deliveries. Although neither Alec Guinness nor Peter Cushing is at his best here, both lend A New Hope a sense of legitimacy. Guinness later admitted regretting playing Obi-Wan but that didn’t stop him from making cameos in the two sequels. The iconic villain, Darth Vader, is a three-part collaborative effort among the costume department, bodybuilder David Prowse, and the stentorian tones of James Earl Jones (uncredited in the original theatrical cut). 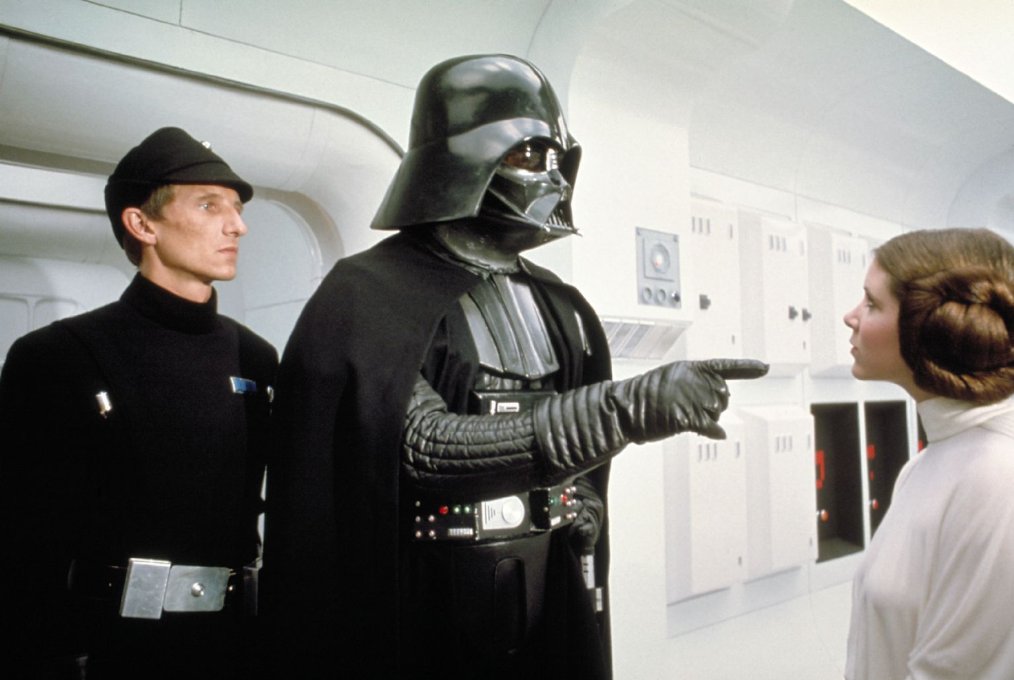 The score for Star Wars remains one of history’s most popular and recognizable, with an electronic disco version landing on the pop music charts in the late ‘70s. The LP sold millions of copies with kids putting aside ABBA and Elton John in favor of the London Symphony Orchestra. John Williams vaulted to the front of the A-list line of composers. His themes and orchestration for Star Wars remains one of the signature projects of a long and varied career. It’s great music and the passage of time (with its growing familiarity) has only made it more powerful. Williams’ work may be the single most important element of consistency and continuity across all the Star Wars films.

Four decades after its release, A New Hope remains the most venerated of the six Lucas-made Star Wars films because of its purity of joy and innocence. As familiar as many of the elements are, Lucas gave them a new polish, leaving them gleaming. At no point does Star Wars feel like a retread. This was the movie that reshaped the industry (for better or worse); it’s possible to argue that no more important film was released during the second half of the 20th century. But A New Hope isn’t merely of great historical consequence; it’s a fully satisfying motion picture experience. The film works, and it does so as effectively today as it did in May 1977.