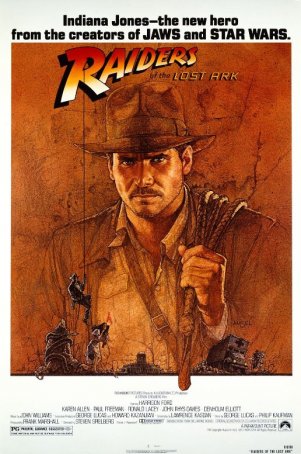 Spoilers Ahoy!: The assumption is that everyone reading this review has seen Raiders of the Lost Ark. The review discusses in frank detail things about the ending, so, if you haven't seen the film and don't want its secrets spoiled, watch the movie before reading this review.

You have to love a movie that is so devilishly clever as to make the hero's every effort, no matter how Herculean, irrelevant to the conclusion. Had Dr. Jones elected to go on an extended vacation to Mozambique and never have anything to do with the Ark of the Covenant, nothing would have changed. Jones doesn't save the day. In fact, he doesn't come close to rescuing it, unless one considers his having failed as being the key to success. (Although he does get the girl.) Yes, the movie ends with melting faces, but, underneath all of that liquefying flesh and exploding heads, there's an abundance of irony just waiting for the attentive movie-goer to unearth. When was the last time that an action hero has been so utterly, completely inconsequential as Indiana Jones?

But, in discussing the ending, I'm getting ahead of myself. Better, instead, to go back to the beginning. Where that is, is anyone's guess. It could be back in the late '40s, when a young George Lucas was enthralled by the cliffhanger serials that would inspire this film. It could be in 1975, when Steven Spielberg made a little movie about a not-so-little shark and suddenly became a big name in Hollywood. It could be in 1977 when Lucas' Star Wars singlehandedly revived science fiction and solidified the concept of the summer blockbuster. Or it could be later in that same year, when Lucas and Spielberg, while both vacationing in Hawaii, decided that they had to work together on a project. That project would become Raiders of the Lost Ark.

Action movies were a different breed in the pre-1981 years than they are today, and one of the reasons for their transformation had to do with Raiders of the Lost Ark. Before this movie, James Bond ruled the roost and the Bond formula was the accepted path that any self-respecting action movie would follow. The first Indiana Jones outing changed that. The film was constructed as a series of cliffhangers with narrow, death-defying escapes. Not since the era of serials have audiences so often asked the question, "How's he going to get out of this one?" It's unfair to claim that the 007 outings were unexciting, but, compared to Raiders of the Lost Ark, they come across as sedate. Raiders transformed the action movie landscape. In the years that followed, nearly every action movie would try to generate the same sense of suspense and tension. Even the Bond movies would catch on.

As played by Harrison Ford, Indiana Jones represents a different kind of action hero. By hearkening back to the protagonist from those black-and-white serials, Lucas and Spielberg created the model for the future. Jones is as close to an "everyman" as you're likely to find in an action movie. He's tough, but not that tough; he has women problems; he wears natty, "lived-in" clothing; he doesn't drink martinis, regardless of whether they're shaken or stirred; he frequently gets bumped, beaten, and bruised; and he doesn't have biceps like a Mr. Universe. One has to wonder if someone like John McClane (Die Hard's fly in the ointment) could have existed if Ford hadn't trailblazed this road. Certainly, there wouldn't have been any Jack T. Colton (Michael Douglas' character in the best of the Raiders re-treads, Romancing the Stone) or Rick O'Connell (Brendan Fraser in The Mummy).

The film, which transpires in the late 1930s, opens with a wonderfully tense, pulp-inspired sequence inside a ruined temple as archeologist adventurer Indiana Jones seeks to avoid a number of pitfalls and traps on his way to recovering a priceless artifact. Tarantulas, gaping pits, lethal spikes, arrows, and a huge rolling boulder are a few of the dangers he overcomes, only to lose possession of the statuette to his arch-rival, Rene Belloq (Paul Freeman), once he emerges. Indy escapes relatively unscathed, but returns home with his tail between his legs, disappointed at being unable to retrieve the prize. His consolation, however, is that the U.S. government would like him to track down the Ark of the Covenant, and they are willing to pay handsomely for him to do so.

Indy's journey in search of the Ark reunites him with an old flame, Marion Ravenwood (Karen Allen), who holds a key piece of the puzzle necessary to pinpoint the artifact's location. Then it's on to Cairo, where he teams up with an old friend, Sallah (John Rhys-Davies), who gives him information on the Nazi dig site, supervised by none other than Belloq. It becomes a race between Indy and Belloq for the prize - a race that Indy wins before Belloq steals away the spoils, leaving Marion and him trapped in near-darkness surrounded by thousands of hissing snakes. But Indy isn't finished, and, after escaping from Belloq's trap, a chase ensues involving planes, trucks, ships, and a submarine. In the end, the Nazis get the Ark, but learn that sometimes it's better to lose than to win.

Certainly, Raiders of the Lost Ark is a breathless, white-knuckle experience of a movie. It is also perfectly paced. There's enough time in between the frequent action scenes to provide the minimum of exposition and character development for us to understand what's going on and to appreciate the relationships between the individuals who populate the screen. There's none of the frantic quick-cutting that has since become a staple of action movies (thank you, editor Michael Kahn!), and the production does not seem frenzied and out-of-control. This isn't a case of cardboard figures running around in circles and blowing things up. We care about Indy and Marion in ways that we rarely care about protagonists in this genre. When Marion "dies," it stings.

Which brings us to one of Raiders' great strengths: the performances. No Oscar nominations were awarded, but it's hard to imagine any group of actors doing a better job. By the time Raiders of the Lost Ark was made, Harrison Ford had filed off the rough edges that were apparent in his first outing as Han Solo. Ford is completely at home in Indy's rough-and-tumble skin - a rogue, scoundrel, and mercenary with a heart of gold. (Sound a little like his Star Wars alter ego, doesn't it?) We know and like Indy from the start of the movie, primarily because he doesn't seem like an indestructible superhero, doesn't try to hide his many faults, and has a self-deprecating sense of humor. A lot of that is Ford.

Then there's his damsel-who's-not-always-in-distress, Marion. Sure, she screams from time-to-time, but she's no wallflower. The punch she delivers to Indy may be the hardest one thrown in the movie, and she's no less gentle with the bad guys. Karen Allen plays the part with spirit and spunk, and the attraction between the two leads is palpable. Marion is heads-and-shoulders above the other two women Indy flirted with, and her absence is one of the key missing ingredients from Indiana Jones and the Temple of Doom and Indiana Jones and the Last Crusade. Here's hoping she returns if there's an Indiana Jones 4, with just as much fire.

One of the great, underrated aspects of Raiders of the Lost Ark lies in the near-perfect casting of the supporting players. Is there a better choice than the imposing, good-natured John Rhys-Davies as Sallah, Indy's desert cohort? These days, Davies may be playing Gimli the dwarf, but this is the movie in which he first gained widespread international attention. As Belloq, Paul Freeman is the cultured villain, cut from the mold of those who are used to getting their way but don't like dirtying their lily-white hands. The scene in which he and Indy engage in a verbal sparring match (right after Marion's supposed death) is one of the movie's highlights. Ronald Lacey is deliciously creepy as the Nazi Toht, and he plays the part in full Peter Lorre form. It's impossible to forget the gag when he turns an apparent instrument of torture into a coat hanger. Finally, other actors with minor parts include veteran Deholm Elliot as Indy's mentor, Marcus Brody, and Alfred Molina as Indy's companion on the temple heist.

One thing that makes Raiders of the Lost Ark so fresh is a sense of spontaneity, some of which is the result of on-set changes and ad-libs. The action scenes were rigorously storyboarded and planned, but that wasn't always the case with the less rigorous material. One of Indy's most frequently quoted lines, "It's not the years, honey, it's the mileage," was added by Harrison Ford on the spot. The famous shooting of the fearsome sword wielder in the Cairo bazaar was another last-minute change, replacing a lengthy fight sequence. (That scene routinely got big laughs when the movie was played in theaters.) Throughout filming of Raiders, Spielberg encouraged an atmosphere of collaboration and companionship, and it works to the film's advantage.

Although there are plenty of special effects in the movie, Raiders of the Lost Ark was made in an era when stunt work was more critical than anything added in post production. Ford did many of his own stunts, and ended up with the cuts and bruises to show for them (not to mention a torn ACL). The most intensive stunt sequence - the fight on the truck that ended up with Indy being dragged along the ground behind the vehicle - employed both the actor and his double, and remains a thrilling sequence because we recognize that this isn't the result of computer animation - it's really happening.

For composer John Williams, who has long been favored by both Spielberg and Lucas, the chance to work on Raiders of the Lost Ark offered him an opportunity to collaborate with them both, and to add another memorable theme song to his list of credits. In the five-year period from 1977 to 1982, Williams created five of movie-dom's most popular title tracks: Star Wars, Close Encounters of the Third Kind, Superman, Raiders of the Lost Ark, and E.T.

The deserved popularity of Raiders of the Lost Ark resulted in a huge box office bonanza for Paramount Pictures. This is the kind of movie that, even today, audiences immediately fall in love with. It has all the right ingredients: a smart script, a likable hero, a dash of romance, more than a touch of comedy, and a lot of fast-paced action. In 2003, it's a formula, but Spielberg and Lucas were the ones who established the recipe by using ingredients both old and new. The two sequels are vastly inferior - Indiana Jones and the Temple of Doom is too ponderous and Indiana Jones and the Last Crusade is unforgivably fatuous. Yet, because the first entry of the series leaves such an indelible imprint, the existence of lesser chapters to the Indiana Jones saga does nothing to dilute its impact. Raiders of the Lost Ark is a movie to be savored by viewers of all ages and all persuasions.