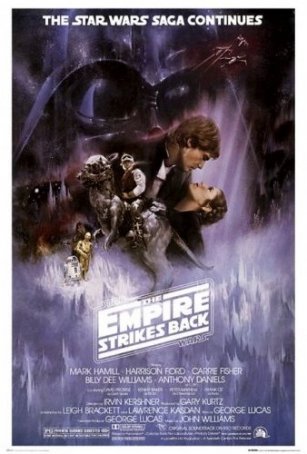 Indulge me for a moment as I time travel back to 1980. Historically, it was a signficant year -- the Iran hostage crisis raged, Ronald Reagan won the Presidential election, and the United States boycotted the Moscow Summer Olympics in response to the Soviet invasion of Afghanistan. But, for science fiction movie lovers, there was only one event: the May 21 opening of The Empire Strikes Back. For the first time in three long, merchandise-clogged years, new Star Wars had reached screens. The movie was a guaranteed success before its first public show.

Although it lacks the pioneering "newness" of Star Wars, The Empire Strikes Back is in many ways a superior motion picture. The storyline is more interesting and ambitious, the characters -- little more than appealing types in the original -- are allowed to grow and develop, the special effects are more mature, and the tone is deliciously dark and downbeat. It's the latter quality that has made The Empire Strikes Back the least favorite among young Star Wars fans -- excepting Yoda, there's nothing cute to be found, and the film definitely doesn't leave viewers with a warm, fuzzy feeling. In the first film, good triumphed decisively over evil; here, it's almost the other way around.

For the Special Edition, Lucas has chosen to do considerably less re-engineering than he did with Star Wars, which is evidence that Empire, as originally presented, was close to his vision. The soundtrack has been digitally beefed up, a few new scenes have been inserted (including some extended shots of the Wampa ice creature's attack), and certain effects sequences have been noticably enhanced (the Millenium Falcon's approach to the Cloud City being the most obvious). In general, however, the changes to Empire are less obvious than those to Star Wars, which were subtle enough in their own right. There's nothing in the Special Edition that changes the scope, quality, or intent of the film. It's a little bigger, a little brighter, and a little louder.

The movie does not pick up where Star Wars left off. The Death Star's destruction is a thing of the past; Luke Skywalker (Mark Hamill) and Han Solo (Harrison Ford) have been with the Rebellion for quite some time. There's a love triangle involving the two friends and Princess Leia (Carrie Fisher), although Han, the perpetual scoundrel, has the upper hand. When an Imperial Probe Droid turns up on the ice world Hoth, where the current Rebel base is located, it's time for a quick evacuation. Darth Vader (David Prowse, voice of James Earl Jones) detects his quarry, Luke, there, and orchestrates a full-scale invasion. Suddenly, the Rebels are on the run, with Han taking the princess, Chewbacca (Peter Mayhew), and C-3P0 (Anthony Daniels) on board the Falcon and into an asteroid field to avoid pursuing TIE fighters. Meanwhile, Luke, along with the faithful R2-D2 (Kenny Baker), heads for the swamp planet of Dagobah to learn from the wizened Jedi Master, Yoda (Frank Oz).

The defining moment of The Empire Strikes Back occurs in the final fifteen minutes, and, during screenings in 1980 (before the nature of the secret became public knowledge), one particular scene provoked collective gasps. In terms of the mythological antecedents that Lucas based much of his Star Wars trilogy on, there was nothing startling about Vader's origins, but, considering the darkness it would inevitably inject into the series, it was a bold stroke. The scenes that begin with the Luke/Vader lightsaber duel and end with the young hero's despairing decision to allow himself to plummet out of Vader's reach represent the most compelling sequence offered by any of the three movies.

The structure of The Empire Strikes Back is more complex than the relatively linear path traversed by Star Wars. Instead of keeping the heroes together, as was the case in the first film, Lucas, along with director Irvin Kershner and screenwriters Leigh Brackett and Lawrence Kasdan, elects to split them up. As a result, we have Han and Leia fleeing through asteroid fields, flying headlong at Star Destroyers, and facing betrayal in the Cloud City, while Luke fights Imperial Walkers and trains to become a Jedi. Everything comes together at the end, and there's a reunion of sorts, but The Empire Strikes Back concludes with so many unanswered questions that it's tantamount to a cliffhanger.

All of the primary actors are more relaxed here than in Star Wars. Mark Hamill and Carrie Fisher have matured in their craft and are sure of themselves in their roles. Harrison Ford, easily the most successful of the three leads outside of Star Wars, shows obvious improvement, honing his cynical-but-lovable performance to a fine edge. Billy Dee Williams joins the cast as Lando Calrissian, an old buddy of Han's, and Frank Oz lends his voice and manipulative talents to the Muppet-like Yoda (who sounds just like Sesame Street's Grover).

The visual effects in The Empire Strikes Back are far more impressive than those of Star Wars. From the approach of the imposing Imperial Walkers to the escape from the Cloud City, there's a lot here to delight the eye. Likewise, John Williams' score, which uses multiple cues from Star Wars, displays the richness and maturity necessary for a darker, more operatic motion picture. "The Imperial March (Darth Vader's Theme)" is the standout new track, giving a unique musical sound to the chief villain.

Seventeen years after its intial release, The Empire Strikes Back is still as thrilling and involving as ever. Because of the high quality of the original product, it doesn't show a hint of dating. Neither the first nor the third chapters (or, properly, the "fourth" and "sixth") of the Star Wars saga were able to match the narrative scope of Empire, which today remains one of the finest and most rousing science fiction tales ever committed to the screen.