It’s easy to envision how the 2019 re-imagination of Child’s Play could have been successful. After all, the original wasn’t that great of a movie to begin with, born as it was in the cauldron of late 1980s slasher garbage. There was plenty of room for improvement. Somehow, however, the remake is not only worse than the first film, but worse to the point of unwatchability. Although Child’s Play is only 90 minutes long, it’s one of those movies where you check your watch so often you think it has stopped.

The movie tries to be a lot of things, taking stabs at horror, social commentary, and satire/comedy and failing spectacularly at all three. The so-called humor, which includes a clueless black cop (Brian Tyree Henry) and some callbacks to generic slasher movie conventions of the past, is neither funny nor clever. The social commentary, which wants to say something about the dangers of computerized interconnectivity and advanced AI, is more of an aborted subroutine than a fully realized idea. And the horror isn’t frightening or shocking – it’s just an excuse for copious amounts of blood and gore. Child’s Play’s idea of pushing the envelope is having a young child be splattered by a fountain of blood spraying from a victim’s jugular. 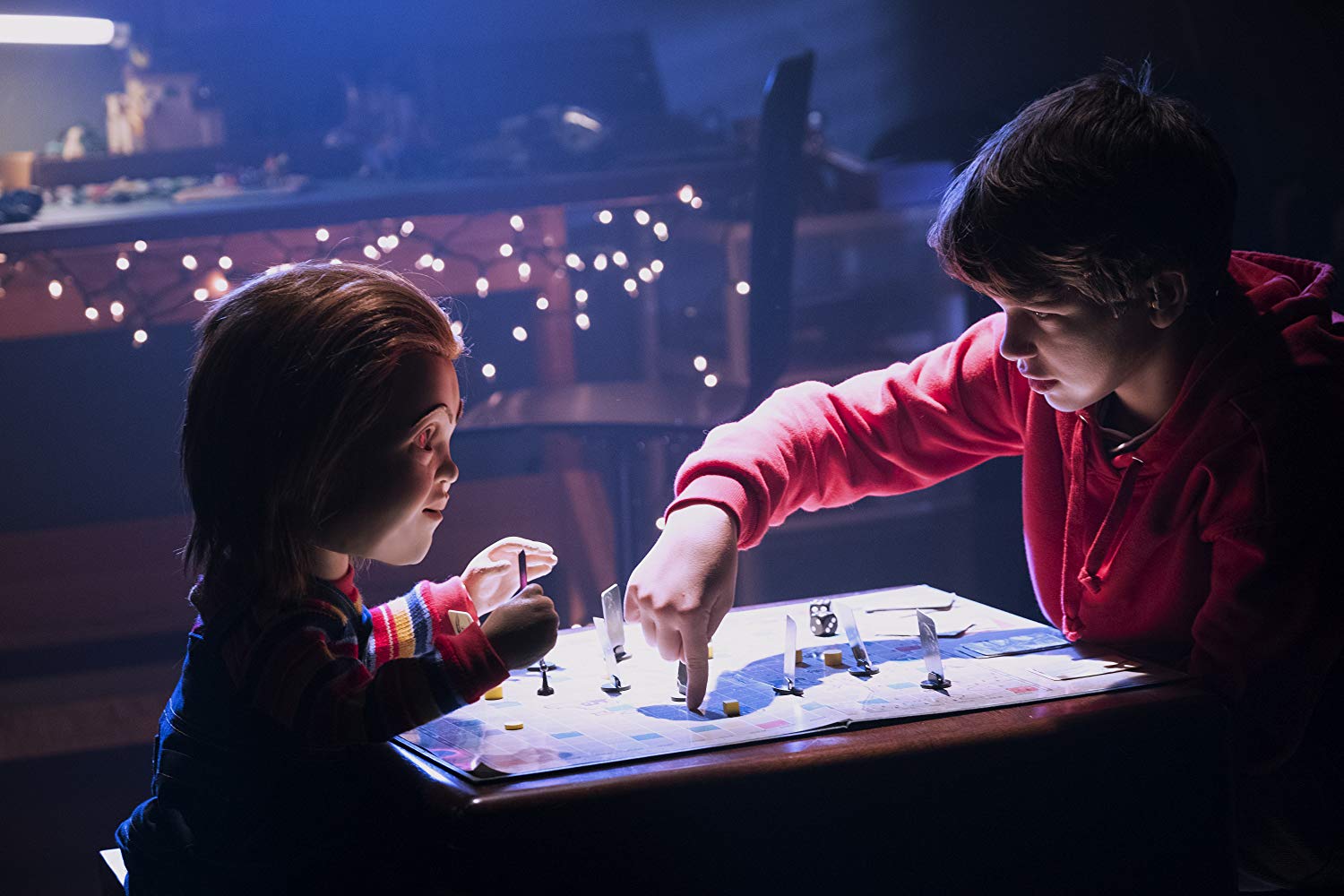 The story seems like it was cobbled together from a bunch of unfinished plotlines. Chucky (voice of Mark Hamill) is a deranged, defective member of the “Buddi” doll line – internet-connected, pint-sized mannequins that exist in a gray zone between toys and household tools. Imbued with an advanced AI, the “Buddi” dolls can learn to anticipate the needs and wants of the children they “imprint” on. They can interact with all other devices and appliances connected to the network. They are fitted with video cameras. They can walk and talk.

In the original Child’s Play, Chucky was a possessed doll. In the new Child’s Play, the evil emerges through malicious coding. Chucky isn’t possessed; he’s infected with a pernicious form of malware. Since the doll in and of itself isn’t imposing, the real danger comes from when it takes over other computer-controlled items, like disabling airbags and seat belts so that when a car crashes, the driver is unprotected. 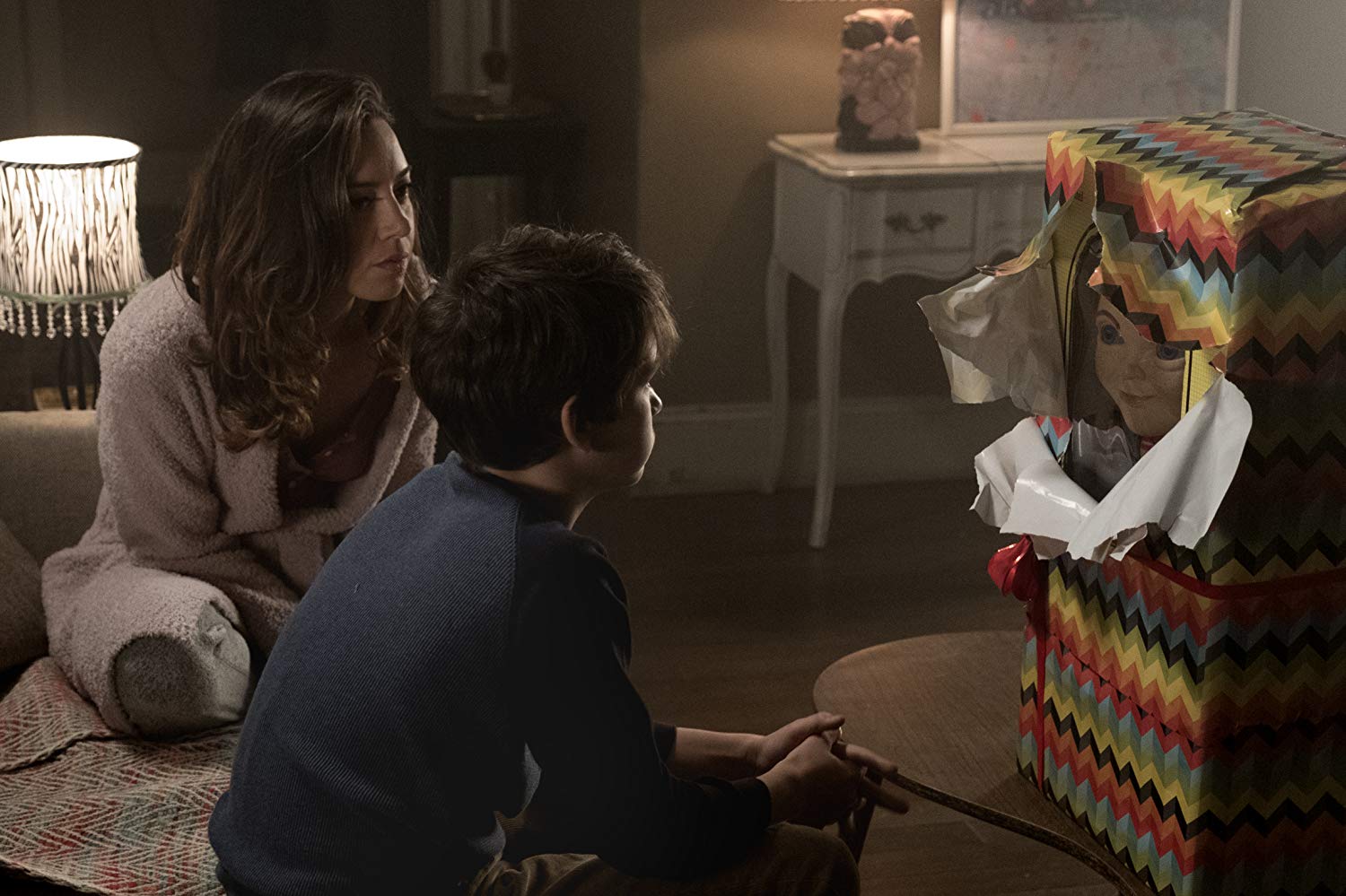 There are human beings in Child’s Play but they are so thinly-drawn that they’re hardly worth mentioning. Aubrey Plaza, in what has to be a career low-point, plays single mother Karen, who buys her son Andy (Gabriel Bateman), a Buddi after a move that leaves him (temporarily) friendless. This particular Buddi, named Chucky, is defective and, with its “thou shalt do no harm” limiters turned off, it seeks to please Andy by vivisecting his foes. What starts out as a stale, boring homage to E.T. turns into a stale, boring slasher movie.

Although it’s arguably necessary to rework Chucky’s appearance to differentiate this movie from the others in the franchise (seven plus several shorts), it’s a double-edged sword at best. Horror movie villains are often defined by how they look, which is one reason why great care has been taken not to mess much with the Michael Myers/Jason masks over the years. This Chucky, although mimicking the original in some ways, looks like a bigger, high-tech knock-off. It’s an imposter. The best thing about the miniature killer is Mark Hamill’s voice, which reminds us that between Luke Skywalker appearances, he was one of the best working voice actors. Still, Hamill is no Brad Dourif when it comes to putting words in Chucky’s mouth.

Despite completely reworking Don Mancini’s premise, director Lars Klevberg and screenwriter Tyler Burton Smith offer nothing new or interesting. Mancini’s ongoing franchise (which had direct-to-video installment as recently as 2017) has always wallowed in its Ed Wood-inspired B-movie badness. That quality more than any other has earned the original Chucky a cult following. This film doesn’t know what it wants to be, what tone it should adapt, and what (if anything) it’s trying to do except make a few bucks off a recognizable brand name.