Lord of the Rings, The: The Two Towers (New Zealand/United States, 2002) 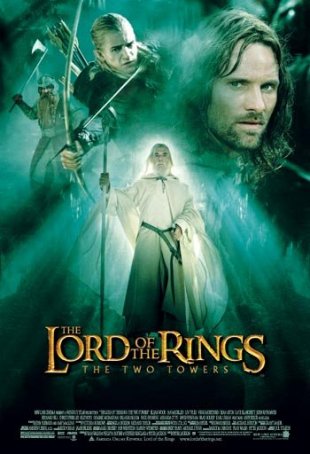 If there is a primary quality needed to bring J.R.R. Tolkien's The Lord of the Rings to the screen, it is vision - an attribute possessed in abundance by director Peter Jackson. In more than 100 years of motion pictures, few cinematic campaigns of this magnitude have been mounted. Not only has Jackson faced the daunting task of creating and populating an entirely new world based on Tolkien's blueprint, but he has contended with the real-word rigors of a two-year shooting schedule and an initially nervous group of purse string holders.

The popular and critical success of The Fellowship of the Ring vindicated Jackson's perseverance. Nevertheless, even as the Oscar nominations came pouring in, the director was moving on. The plaudits heaped upon the first installment would lose their luster if either of the succeeding episodes, The Two Towers and The Return of the King, failed to live up to expectations. And, considering the high ground occupied by The Fellowship of the Ring, the bar would be at an astronomical altitude for the other movies.

Of the three pieces of the Middle Earth puzzle, The Two Towers is the one with the biggest handicap. It is afflicted with the "middle chapter syndrome" - an inherent obstacle for the second episode of any trilogy. The Two Towers has no real beginning or end. (This is as true of the book as it is of the movie.) It takes situations and characters introduced in The Fellowship of the Ring and prepares them for The Return of the King. The trick is to immerse audiences "in the moment" and keep them from looking ahead - a daunting task, to be sure, but one that Jackson is up to.

In nearly every way that counts, The Two Towers is The Fellowship of the Ring's equal. In terms of tone, pacing, character development, plot advancement, and visual splendor, there is no drop-off. More importantly, the continuity is seamless (one advantage of filming the trilogy as a single project), allowing a viewer familiar with the first movie to flow effortlessly into the second. Of course, therein lies a drawback, as well. The Two Towers cannot stand on its own. Familiarity with The Fellowship of the Ring is not just advisable, it is mandatory. Anyone attempting to watch The Two Towers without having seen (or read) the first installment is headed for confusion and disillusionment.

The Two Towers essentially picks up where The Fellowship of the Ring concludes, albeit following a short flashback to the battle between the wizard Gandalf (Ian McKellan) and the Balrog. In the first movie, when Gandalf tumbles from the bridge, we see him disappear into the abyss. Here, however, we follow him as he and the Balrog tumble endlessly downward, continuing their struggle along the way. In the wake of his victory over his foe, Gandalf is reborn as a white wizard, and returns to the world above to re-unite with his former companions. In the company of Aragorn (Viggo Mortensen), Legolas the elf (Orlando Bloom), and Gimli the dwarf (John Rhys-Davies), the wizard heads for the city of Rohan, where he hopes to convince the king, Theoden (Bernard Hill), that war is upon his kingdom. At the same time, the hobbits Merry (Dominic Monaghan) and Pippin (Billy Boyd), having escaped from their orc captors, flee into the forbidding Fanghorn Forest, where they encounter Treebeard the Ent (voice of John Rhys-Davies), a giant shepherd of trees who decides to protect the two diminutive interlopers.

Meanwhile, to the East, Frodo (Elijah Wood) and Sam (Sean Astin) find themselves lost on their way to Mount Doom. And, in addition to suffering from the physical difficulties of such an arduous journey, Frodo is beginning to show the strain of bearing the ring, with the Dark Lord Sauron's baleful glare constantly seeking him. The creature Gollum (Andy Serkis), who has been following the hobbits, attempts to steal the ring from Frodo, but is subdued and captured. Thereafter, he reluctantly agrees to serve as Frodo and Sam's guide and take them to Mordor.

Stodgy Tolkien purists who disliked some of the changes Jackson made to The Fellowship of the Ring may be outraged by what he and his screenwriters have done here. The Two Towers differs much more from its written inspiration than the first movie. Yet, in tone and spirit, this remains very much Tolkien's The Lord of the Rings, although altered in a manner that makes it more of a living, breathing cinematic endeavor rather than a point-by-point regurgitation (like the Harry Potter films). The movie version of The Two Towers also ends before the book does. Certain events that occur late in the novel will be incorporated into the beginning of the film adaptation of The Return of the King.

The stunning climax of The Two Towers is the battle of Helm's Deep - a 30-minute spectacle that features the siege of a seemingly impregnable stone fortress by an army of 10,000 creatures of Sauruman (Christopher Lee). Inside that fortress is a small force of several hundred humans and elves, led by Aragorn, Theoden, Legolas, and Gimli. Although the attack occupies only a dozen pages of Tolkien's novel, Jackson has transformed it into the centerpiece of the film - an amazing, heart-stopping battle against impossible odds. And, while a huge special effects contribution is needed to make the battle such an awesome feast for the eyes, Jackson never lets the CGI work overwhelm the human element of what's going on, and there are plenty of scenes in which costumes, set design, and makeup enflame our imaginations, not computer work.

Jackson has added dashes of mirth and romance to the film - two elements in short supply in the novel. Most of the humor, which is decidedly low-key, involves Gimli, who occasionally seems to be around as much for comic relief as anything else. For example, in the middle of the battle of Helm's Deep, he is infuriated that his number of kills can't keep pace with Legolas'. On the romantic front, Aragorn, who is promised to the elven princess Arwen (Liv Tyler), finds himself the object of attention for Theoden's niece, Eowyn (Miranda Otto). This sets up a triangle.

The returning actors have grown nicely into their roles. There are changes, of course. Elijah Wood's Frodo is haunted and weary, relying more upon Sam. Wood's body language expresses the weight Frodo feels from bearing the ring. Mortensen's Aragorn is a more heroic figure. Ian McKellan plays Gandalf with greater authority now that he has been transformed from a gray wizard to a white one. Newcomer Bernard Hill brings a sense of authority to Theoden. Miranda Otto is regal and strong as Eowyn. Brad Dourif is the slimy Grima Wormtongue, the servant of Sauruman who speaks poison into Theoden's ear. And, as Gollum, Andy Serkis (whose performance is overlaid with computer imagery) presents his twisted character as a strangely tragic and conflicted creature. We feel pity for Gollum.

The Two Towers starts out a little slowly, but the rousing second half, which gathers momentum like a boulder racing downhill, will leave audiences craving more when the end credits roll. Combined, The Fellowship of the Ring and The Two Towers represent one of the most engrossing and engaging six-hour segments of cinema I have ever enjoyed. If the final third of the puzzle is the equal of the first two, this will go down as one of the crowning achievements of cinema. Like its predecessor, The Two Towers is a great motion picture, and not to be missed by anyone who appreciates fantasy adventure.

Lord of the Rings, The: The Two Towers (New Zealand/United States, 2002)