Thanks, but no thanks. That, apparently, is what the producers of Hellboy told Guillermo del Toro when he expressed an interest in making a third film in the franchise he brought to the screen. With apologies to Neil Marshall, it begs the question of who is a better choice to resurrect a franchise that has lain dormant for 11 years: the Oscar-winning visionary who helmed the first two films or a man with an impressive TV resume but little big screen clout? This being Hollywood, the latter choice was made and it was only one of many decisions that have resulted in Hellboy feeling like a cheap imposter.

Hellboy is a reboot of the earlier storyline with David Harbour replacing Ron Perlman in the title role and Ian McShane taking over for John Hurt as Hellboy’s father. All the other characters are newcomers. Two key members of the original ensemble – Doug Jones’ aquatic Abe Sapien and Selma Blair’s hot Liz Sherman – have been deleted. They are somewhat replaced by spiritualist Alice Monaghan (Sasha Lane) and catty Major Ben Daimi (Daniel Day Kim). It would be fair to argue that Perlman is irreplaceable as Hellboy; as a result, Stranger Things’ Harbour comes across like an understudy. His Hellboy is a pale imitation of Perlman’s. Pretty much everyone else in Hellboy is forgettable except McShane, who has never been forgettable in anything. Any list of Hellboy’s positive qualities would be short indeed but McShane would have to be at the top. 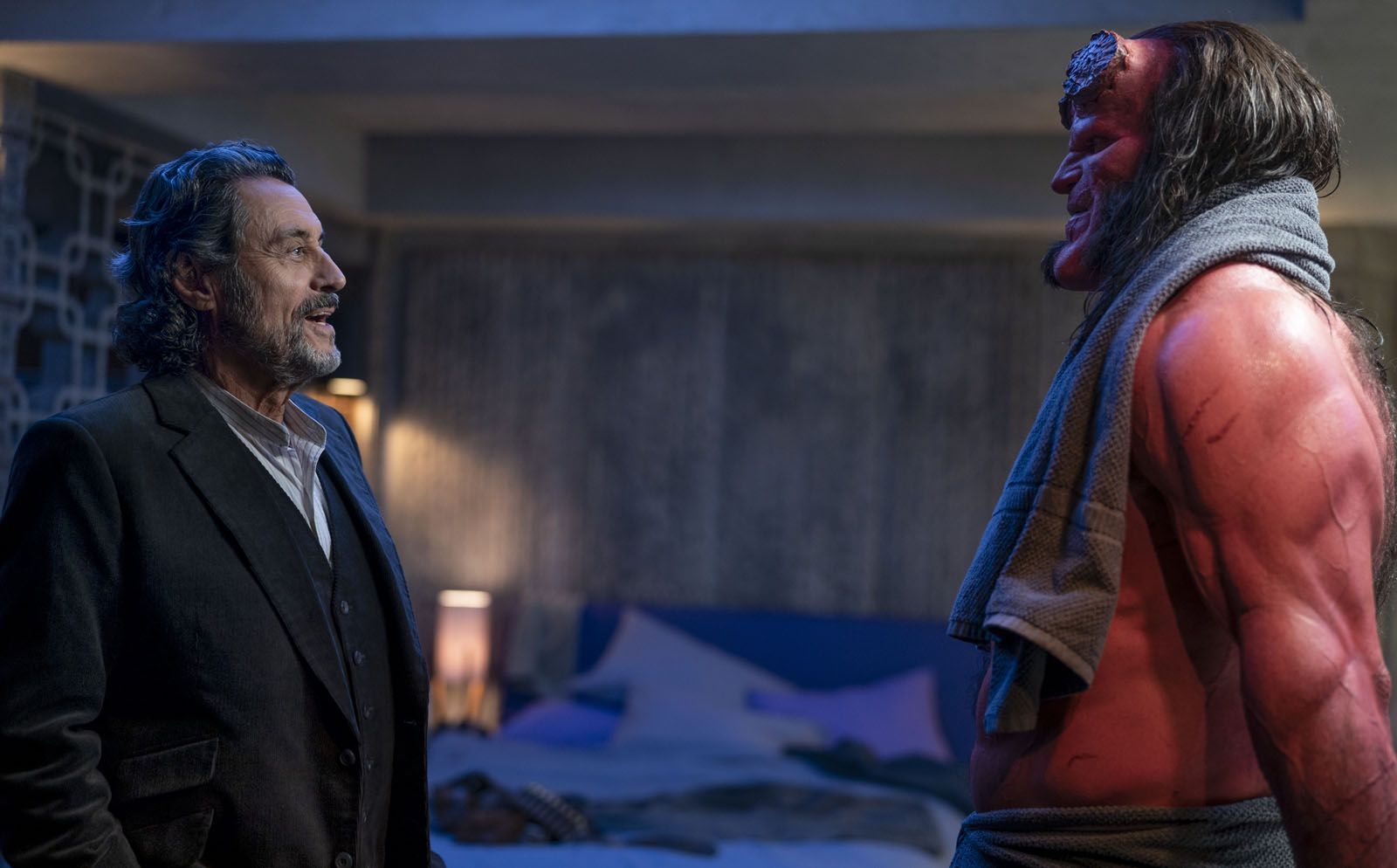 The movie drops us in the middle of an adventure, providing viewers with a sense of disorientation. I guess we’re supposed to be “comfortable” with the situation since we “know” Hellboy from two previous films, even though this isn’t the same Hellboy. The first half of the film interweaves the main storyline with a bunch of flashbacks that fill in various blanks while preventing any sort of momentum from building. The structure makes it difficult to get into the story, which is mostly comprised of Hellboy and a bunch of CGI monsters pounding on each other. It’s like an organic version of Transformers except in this case, instead of robot carnage, we get to see computer-generated human beings ripped apart in an orgy of viscera that might have been gross if it wasn’t so poorly done.

The movie’s villain(ess) is Nimue the Blood Witch (Milla Jovovich), whose backstory involves having been hacked to pieces by an Excalibur-wielding King Arthur. The bits of her body are packed in chain-wrapped crates and spirited off to different locations all across England. Cut to today, when an oversized boar decides that the best way for him to avenge himself on Hellboy (cue flashback to explain why he wants it) is to reassemble Nimue. Hellboy, backed by the entire FBI Bureau of Paranormal Research and Defense, attempts to stop this from happening but he’s easily distracted. The latter portions of the movie feature an appearance by Merlin (who looks suspiciously like the “It’s” guy from Monty Python’s Flying Circus) who initiates a plot twist so ludicrously preposterous that it will cause viewers far and wide to practice the “I coulda had a V-8” forehead-slap. 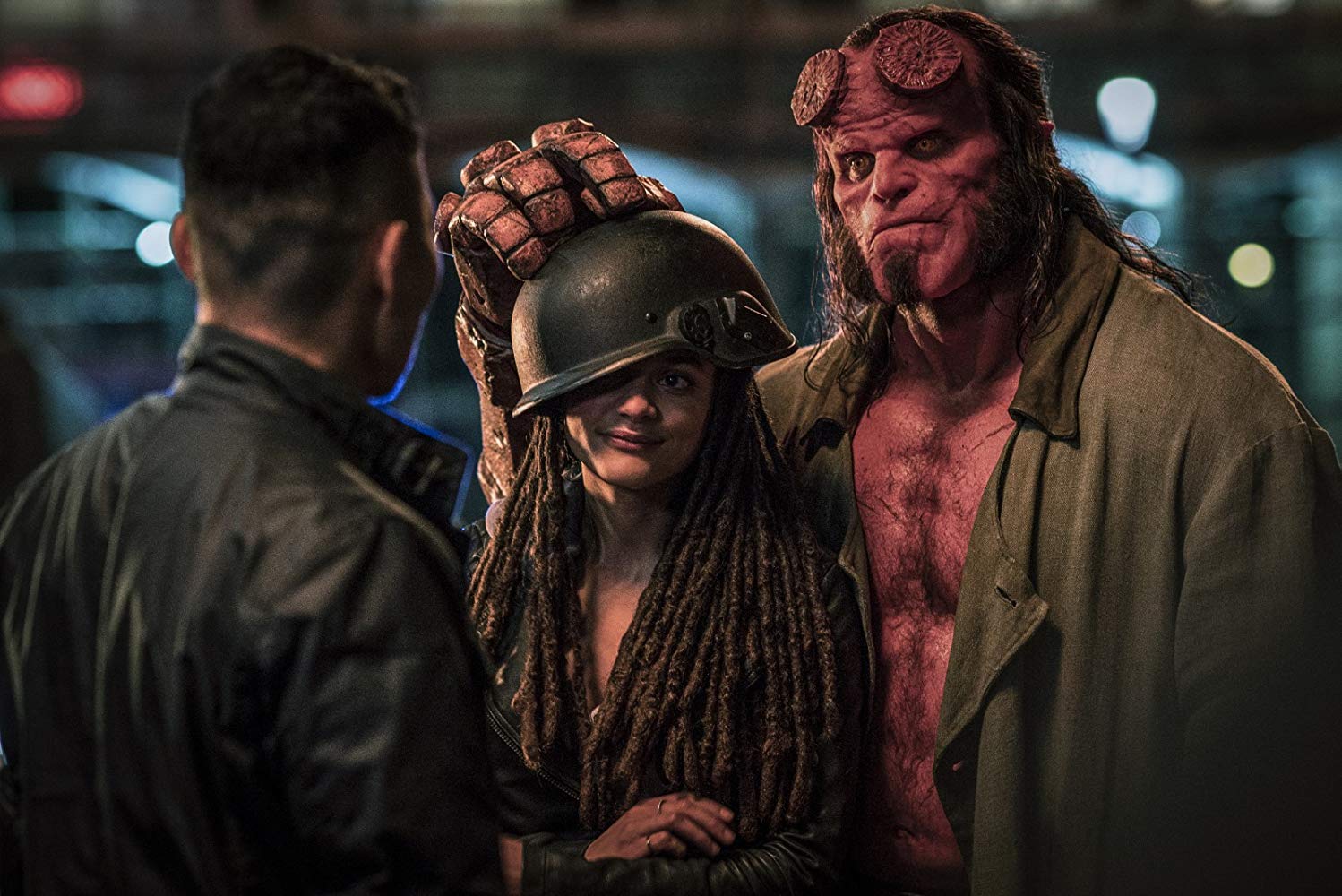 In my review of 2004’s Hellboy, I made the following observation: “Coherence and plotting are not amongst Hellboy's strong suits. The movie does not stand up to any kind of thoughtful inspection and the muddled finale is nonsensical.” To the extent that things have changed since then, they have gotten worse to the point where 2019’s Hellboy seems more like a parody of the original than a reboot. One could argue that Hellboy was Deadpool before there was a Deadpool but Ryan Reynolds advanced the comedic superhero film to the point where Hellboy’s brand of self-deprecating wit and one-liners feels lazy and dated.

The movie is a pointless retread with nothing to recommend it beyond McShane’s commanding presence. Comparing it to Del Toro’s 2004 original and 2008 sequel is like making an analogy between a Broadway production and a high school stage show. My memories of the first Hellboy were of a fun, fantastical superhero adventure. Future thoughts of the 2019 iteration are likely to curdle; it’s a chore to sit through and not something I’ll want to revisit at any point for any reason.