One has to wonder whether Marvel Studios’ reputation as the industry’s King Midas might be in jeopardy. The post-Infinity War continuation has limped along without providing a compelling reason to return to theaters (although millions have done so). Black Widow was disappointing and unnecessary. Shang-Chi was entertaining but failed to break much new ground. And Eternals does little to change the momentum. Directed by Oscar-winner (and avowed MCU fan) Chloe Zhao, the film falls into a no-man’s land of trying to be both portentous and exhilarating and not really succeeding as either. While not a complete failure, Eternals is plagued with problems. Some are related to forcing it, like a square peg into a round hold, into the MCU and some are simply because of narrative and structural sloppiness.

If there’s one salient question to ask, it’s why, especially with the resources of Disney+ available, Marvel Studios elected to go the “DC route” for this film. Back during the run-up to the release of The Avengers, Marvel carefully developed the team by giving most members of the squad either entire movies of their own (Iron Man, Hulk, Captain America) or significant portions of one (Black Widow). Everything built to The Avengers. DC, on the other hand, rushed things, releasing Justice League with undue haste while introducing several characters who had never before been seen. The result spoke for itself. For some reason, however, Marvel has elected to use the DC template rather than their own for Eternals. The result of trying to cram ten backstories and character arcs into a single 150-minute film is a predictable mess. 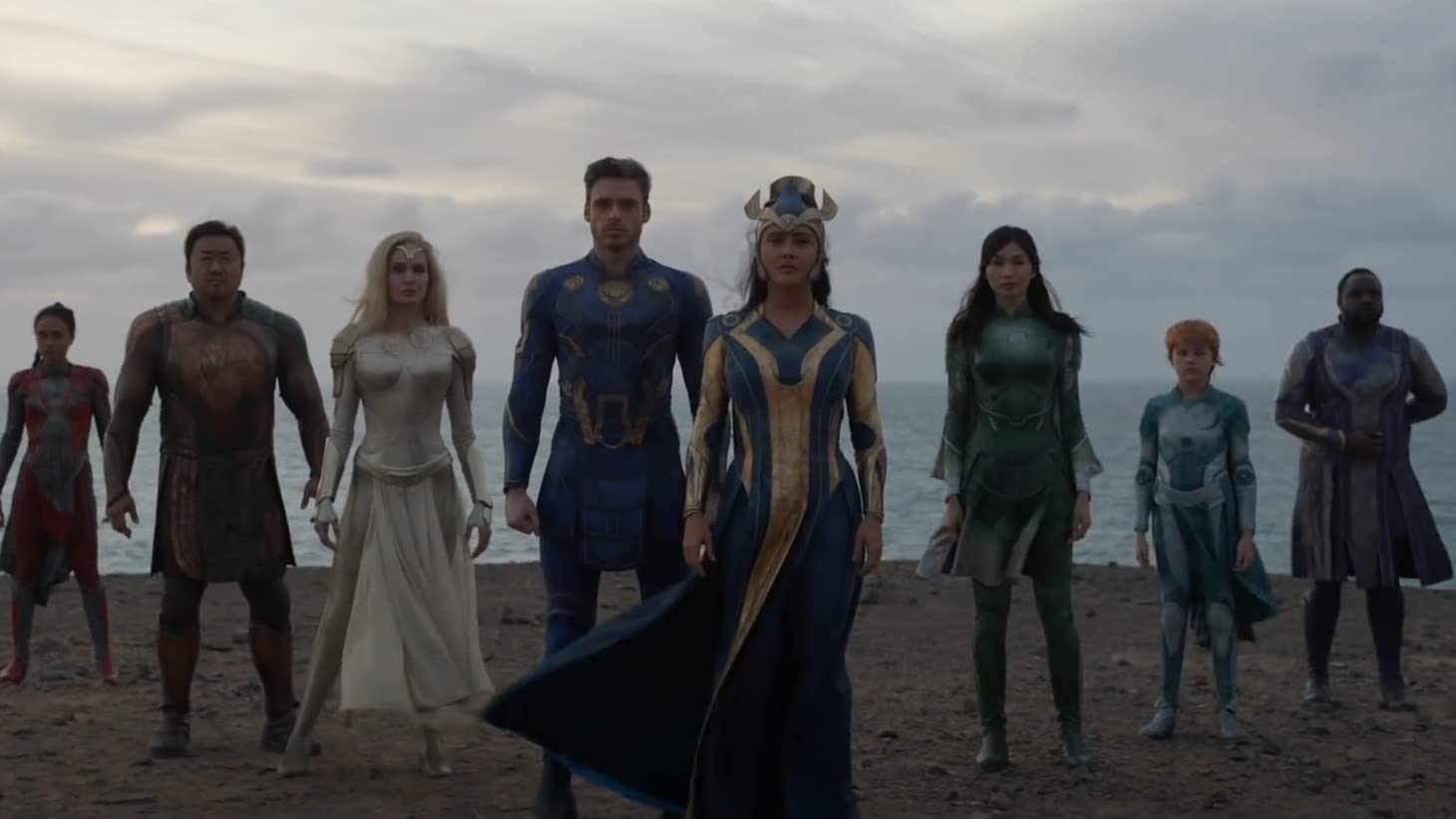 Had Eternals been released in a pocket universe divorced from the MCU, it might have worked better. The logistical problems of fitting this story and its characters into an already-established milieu create all sorts of difficulties. The screenplay proves unable to explain a basic plot-hole in a convincing manner. Why did the Eternals remain hidden and uninvolved during Thanos’ attack? The matter is addressed (how could it not be?) but the answer proves to be mind-bogglingly hard-to-swallow. (Specifics would require a greater degree of spoilage than I feel comfortable divulging.) This isn’t a minor point; it’s a major failing. Had Eternals transpired in a universe where Thanos never existed, it would have gone away.

Then there’s a question about whether the addition of a group of mega-superheroes like the Eternals continues to crowd the MCU with gods and demi-gods. Now, it’s no longer Thor and Captain Marvel. In the span of a single movie, Marvel has added Eternals and Celestials. In the face of such immense powers (and with the “multiverse” concept about to be pursued), the “individual superhero” has been marginalized. Faced with the awesome powers of the Celestials, what’s someone like a Spider-Man, Captain America, or Black Widow to do? They no longer matter. The story has moved beyond them. Uber-super villains require uber-superheroes to fight them. Hence, we have Eternals. But what of so many of the characters we have to come care about during the last 10+ years of Marvel movies?  (This is an indication that the MCU may be following in the footsteps of the comic book universe, which might not be the wisest course. Movies are not comic books nor can they be.) 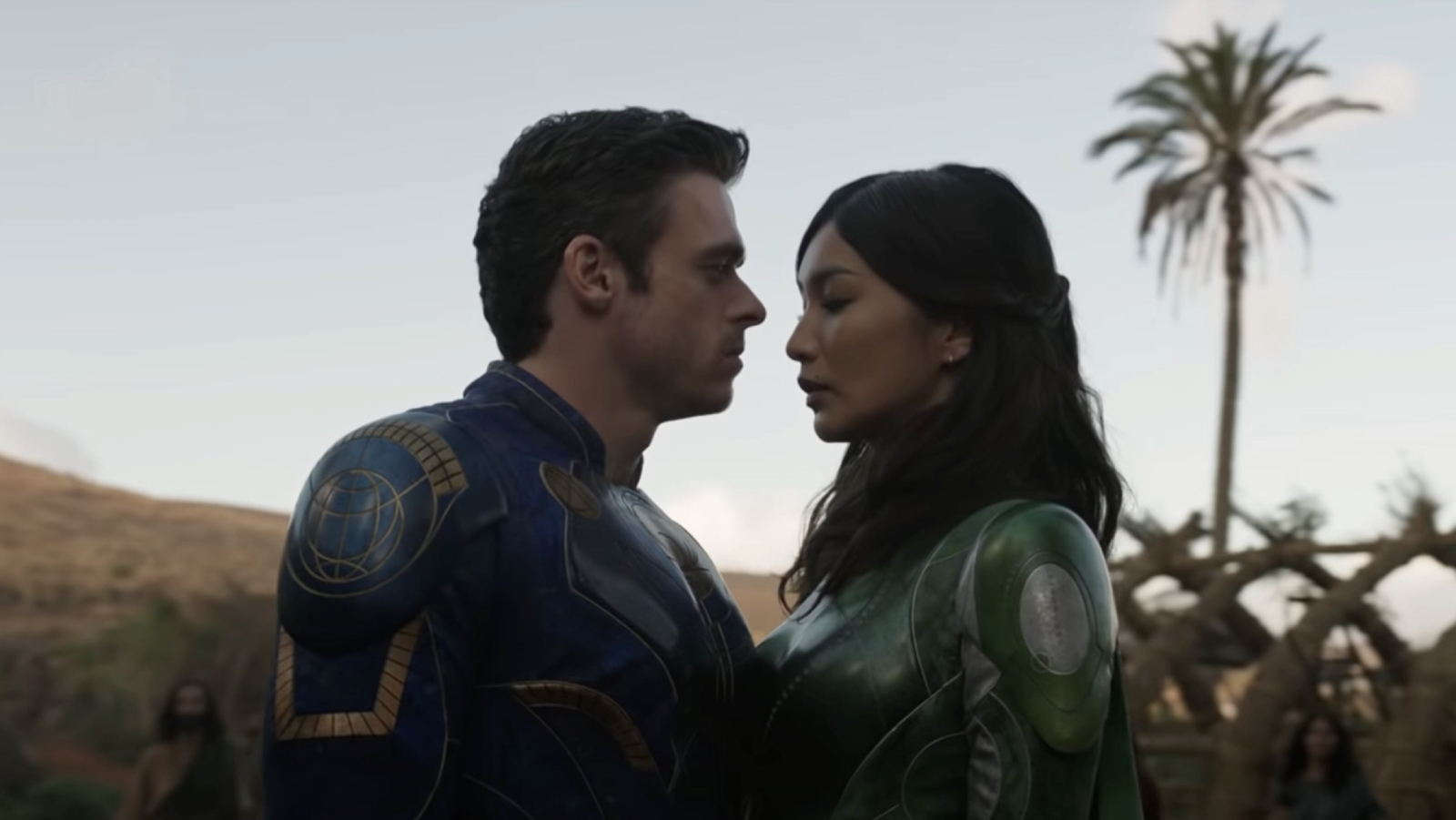 There are ten Eternals (or at least ten who have been sent to Earth). The leader and mother-figure is Ajak (Salma Hayek), who is the only one of the group with a direct “line” to their god, Arishem. Her closest ally in the “family” is Ikaris (Richard Madden), who can fly and shoot energy beams (like Cyclops) out of his eyes. For most of his time on Earth, he has been in love with Sersi (Gemma Chan), who can control inanimate matter, but their relationship has cooled and she is now involved with a human (Kit Harrington). Other Eternals include Thena (Angelina Jolie), a gifted fighter with sanity problems; Kingo (Kumail Nanjiani), who can throw energy projectiles; Phastos (Brian Tyree Henry), a futuristic engineer whose blueprints become reality; Sprite (Lia McHugh), a trickster with mastery over illusion; Makkari (Lauren Ridloff), whose speed might allow her to beat Flash in race; Druig (Barry Keoghan), who can control minds; and Gilgamesh (Don Lee), who has the best pure strength of any Eternal.

The backstory takes a while to unpack. The Eternals were sent by Arishem (and his race, the Celestials) to Earth 7000 years ago to protect it from the Deviants, monstrous creatures that roam the cosmos. They were instructed to not to do anything else except destroy the Deviants and, when that task was completed, they were forced to assimilate into the human population, although their immortality set them apart. Now, in the modern-day, they are scattered across the globe but the return of the Deviants forces them to re-assemble the team and confront a dark secret hitherto known only by Ajak about the true nature of their mission on Earth.

With an Oscar on her mantle for the somnambulant Nomadland, one has to wonder whether Zhao was the right choice for the job. Her attempts at adding issues of existential import might have worked better if they didn’t echo Thanos’ dilemma in Infinity War too closely (after all, he believed his actions were cosmically justified). Also, we never get a feel for the scope of the Eternals’ power. How strong are they in comparison to, say, the X-Men? Can they be killed by anyone who isn’t a Deviant or a Celestial? I guess it’s up to a future director to fill in the blanks. 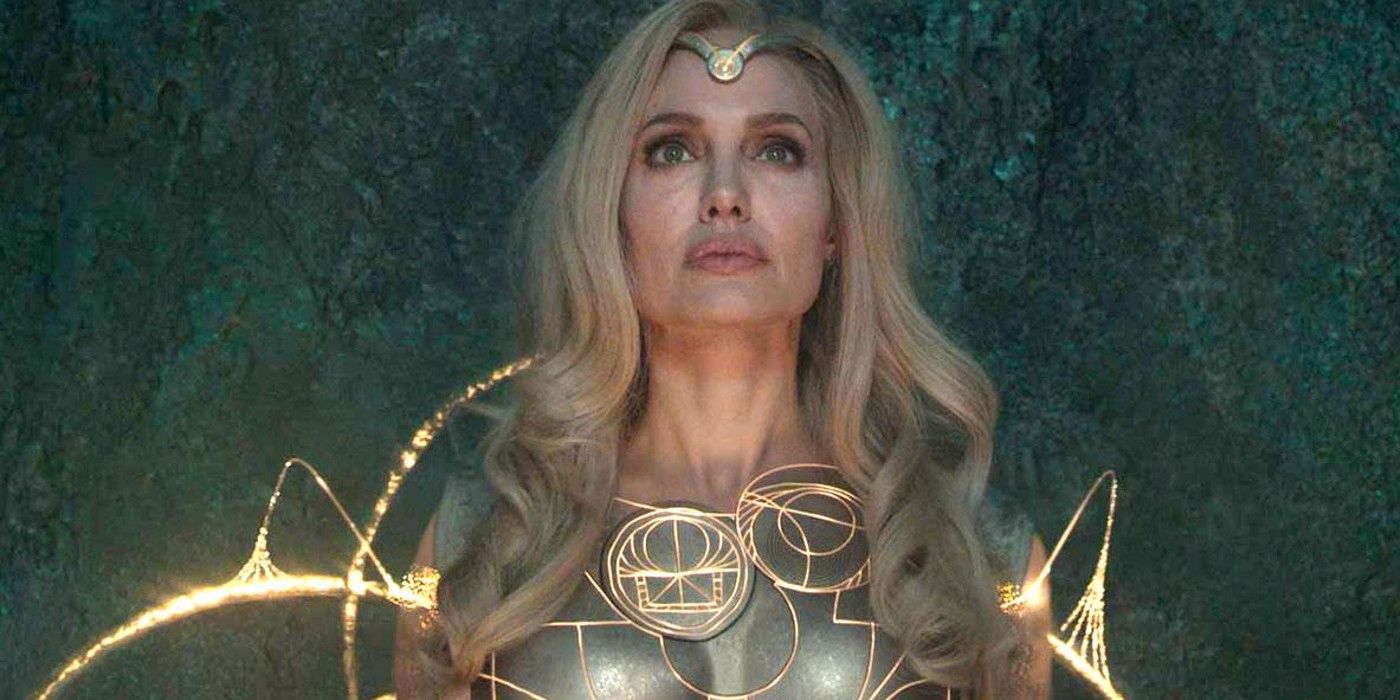 The biggest overall problem is the number of characters, none of whom were previously introduced. The screenplay has too much heavy-duty lifting to do: introducing ten new card-carrying members of the MCU, fleshing out their backstories, getting them back together, and providing them with a present-day storyline. At the end of 2 ½ hours, I didn’t feel like I knew any of them, nor did I much care one way or another. That’s a problem that no script, no matter how cleverly written, could have overcome. It’s a result of not rolling out the characters over multiple movies or a made-for-Disney+ mini-series.

For the most part, the cast impresses, although the in-jokiness of the encounter between ex-Game of Thrones siblings Rob Stark (Madden) and Jon Snow (Harrington) comes a little too close to breaking the fourth wall. (It’s subtle but obvious to anyone who has watched the HBO series.) It’s fair to say that no one gets enough screen time to stand out. Even the big names, like Angelina Jolie and Salma Hayek, blend into the background. But maybe that’s how it should be for a truly ensemble film.

One surprise is how adept Zhao is at handling the action scenes. They are well-choreographed and elegantly shot. Cleanly presented and not reliant on fast-cut editing, they do a good job of generating suspense. Nevertheless, with the film’s primary problems being related to its narrative structure and overall placement in the MCU, these things are of secondary import. Eternals, despite trying to be a departure from the superhero generic norm, misses wide of the mark and ends up being a major lapse.