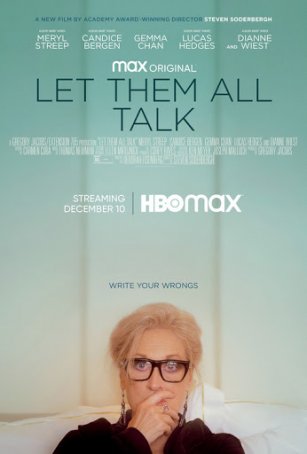 How to describe Steven Soderbergh’s Let Them All Talk? The second major movie in 25 years set almost entirely aboard an ocean liner making transatlantic crossing? An Agatha Christie mystery without the mystery? An opportunity to remember how good Meryl Streep can be when she’s not imitating a real-life person or going over-the-top? Regardless, while Let Them All Talk doesn’t seem substantial enough to capture the attention of those who dole out awards at this time of the year, it’s not without interesting characters, smart dialogue, and some intriguing ideas about love, life, and art. And, as with almost everything directed by Soderbergh, there’s a compulsive watchability to the proceedings.

Plot-wise, there’s not a lot going on here. Let Them All Talk chronicles the interactions of a small group of people during the two-week journey across the Atlantic aboard the Queen Mary 2. Although we have become conditioned that any movie involving a big ship in a bigger pond will include giant waves, sea monsters, and/or a sinking, none of these things happen. The four main characters are author Alice Hughes (Streep); her two oldest friends, Susan (Dianne Wiest) and Roberta (Candice Bergen); and her nephew, Tyler (Lucas Hedges). On the periphery are Alice’s literary agent, Karen (Gemma Chan), and superstar mainstream writer Kelvin Krantz (Dan Algrant). 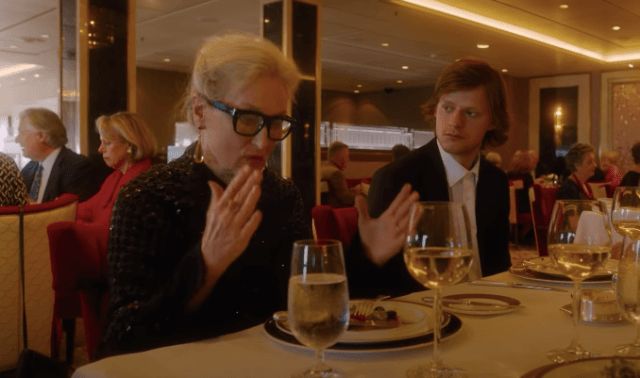 Although the screenplay is credited to Deborah Eisenberg, Soderbergh used it as an outline and allowed the actors to improvise most of their dialogue. The movie was shot on-location (which is to say it was made during an actual QM2 crossing) and the actors appeared as much for the experience as for the work. Streep, for example, whose previous outing had been another collaboration with Soderbergh (The Laundromat), is said to have been paid a career-low 25 cents to make Let Them All Talk.

The narrative evolves without any flashbacks yet is in many ways more deeply rooted in the past than the present. Alice is one of those “one hit wonder” authors who wrote a beloved, praised novel (it won a Pulitzer) but, despite accumulating a respectable list of subsequent titles, never again came close to that pinnacle. She is on board the ship because a health issue prevents her from flying and she wants to accept a prestigious literary award in England. Susan sees this is a chance to renew of 50-year old friendship while Roberta, whose story may have been appropriated for Alice’s most successful book, is seeking an apology and possibly some financial compensation. Tyler enjoys spending time with his favorite aunt but he becomes sidetracked by Karen, although their interactions don’t necessary evolve the way Hollywood tells us they should. Finally, there’s Kelvin Krantz (it’s probably no coincidence that the name evokes “Dean Koontz”), whose every book is a best-seller. (He admits that each book takes four months – one to outline and three to write.) He proves to be more thoughtful and knowledgeable than one might expect from someone who pens such a volume of easily-digestible morsels. 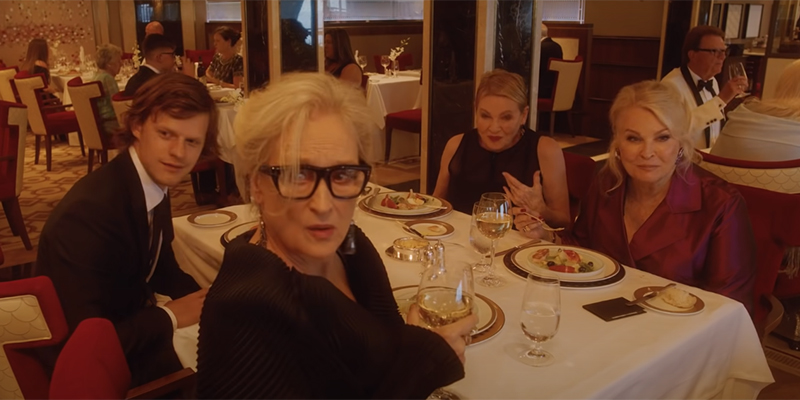 Soderbergh is careful never to overplay his hand or attempt to do too much with the characters or their situations. He doesn’t turn Let Them All Talk into some kind of art house soap opera. The movie is more about individual conversations and how they fit into a larger picture than it is a conventionally plotted drama. Alice has a fascinating monologue in which she ponders the miracle of how a long-dead author could write something that could reach across the centuries and touch the consciousness of someone who hadn’t even been born when she wrote the words. There’s something in that sentiment that encapsulates what the movie is saying. It’s along the lines of life being short but art being enduring.

With HBO Max providing the funding (this is a “Max original” not a Warner Brothers film and it will not be receiving a theatrical release), Soderbergh and Streep have again shown a willingness to work in whatever medium welcomes them. (The Laundromat was made for Netflix.) It also illustrates what can be done with almost no budget (although it helps that the name “Soderbergh” was attached since that name can attract A-list talent at cut-rate prices). I’m not going to claim that Let Them All Talk is a 2020 Top 10 contender but I found watching it to be a breezy and enjoyable experience, which is more than I can say for a lot of the movies I have screened this year.