If you were paying attention to the news in 2015, the phrase “Panama Papers” will mean something. The Laundromat is Steven Soderbergh’s expose about the release of those documents, which provided details of more than 200,000 offshore accounts and shell companies. When leaked to journalists by a whistleblower inside the Panamanian law firm of Mossack Fonseca, the revelations brought down powerful men and created a media feeding frenzy. Based on the book Secrecy World by Jake Bernstein, The Laundromat uses a format not unlike that of The Big Short (without Margot Robbie in a bubble bath) to shine the light on the kinds of activities uncovered by The Panama Papers.

Instead of taking the serious route he previously espoused in Traffic, Soderbergh has opted for a more Coen Brothers-flavored approach. The movie hops between four loosely interconnected vignettes as it shows the victims and perpetrators of various ethical and/or legal misdeeds. None of the characters are fully formed nor are their stories completely told. Soderbergh uses them as a way to clarify and humanize the details of the shady, shadowy world of offshore finances, including the difference between “tax avoidance” (which is legal) and “tax evasion” (which is not). How thin is the line? “As thin as the wall of a jail cell.” 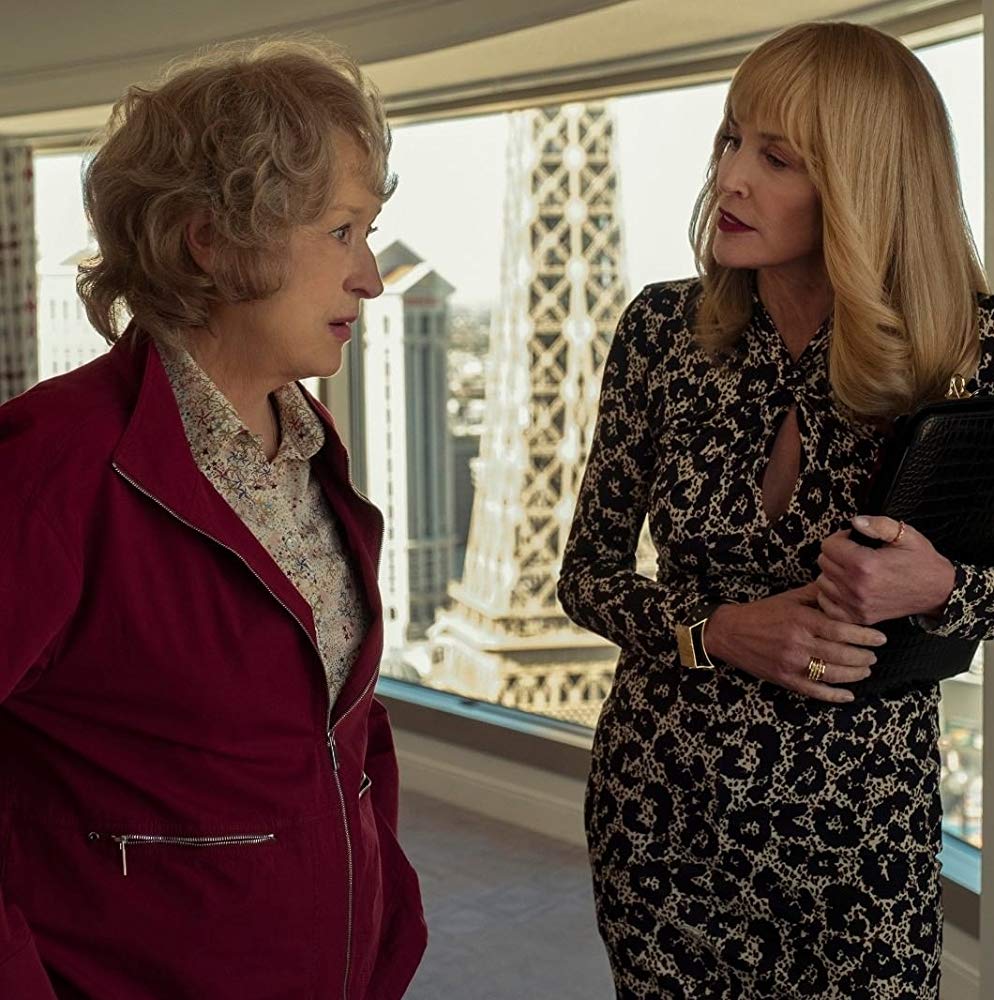 To guide us through this minefield of financial terms and into the rabbit hole of shell companies and tax shelters, Soderbergh gives us two men – German Jurgen Mossack (Gary Oldman, with a hilariously over-the-top accent) and Panamanian Ramon Fonseca (Antonio Banderas) – who act almost like reality show hosts (complete with perfectly tailored suits, even when interacting with cavemen). In addition to being our navigators and narrators, they are also key characters in one of the vignettes – the two lawyers who run the firm that uses their names. At one point, they offer a defense for their seemingly indefensible actions: they aren’t responsible for the actions of their clients. They provide privacy. The end result, however, is what one of the movie’s chapter captions declares: “The Meek Are Screwed.” Or, as Meryl Streep’s character puts it: When are the meek actually going to inherit?

Streep is Ellen Martin, a sixty-something retiree who, with her mop of short gray hair, looks like everyone’s grandmother. After her husband (James Cromwell) dies in a boating accident, she discovers that she’s not going to get the insurance money she’s entitled to. That’s because the insurance company was sold to another company that was in trust to a bigger entity that exists only on paper. At the end of the paper trail, there’s no money. Ellen starts her own investigation but she’s no Erin Brockovich (Soderbergh made a movie about her in 2000). When she travels to the island of Nevis to track down the man in charge of the United Insurance Group, Malchus Boncamper (Jeffrey Wright), the shady executive slips through her fingers – although a nasty surprise awaits him in Miami.

Meanwhile, a wealthy black man named Charles (Nonso Anozie) gets caught by his adult daughter having an affair with her college roommate. To keep the information from his wife, Charles offers to “negotiate” a settlement with his daughter. What would be fair? Maybe control of a $20M shell company? As she learns, caveat emptor applies when it comes to this kind of deal. Elsewhere, a British money launderer (Matthias Schoenaerts) puts the squeeze on one of his Chinese clients (Rosalind Chao) and discovers that hiding money isn’t the only crime the old lady is capable of.

The interconnected shorts are presented with a hard edge and a rapier wit. Other filmmakers might have approached the material with more heat and passion. Soderbergh opts for an arm’s-length style, using this as an opportunity to educate as much as entertain. At the end, viewers may feel the beginnings anger but they’ll also be better informed as to why that anger is righteous. 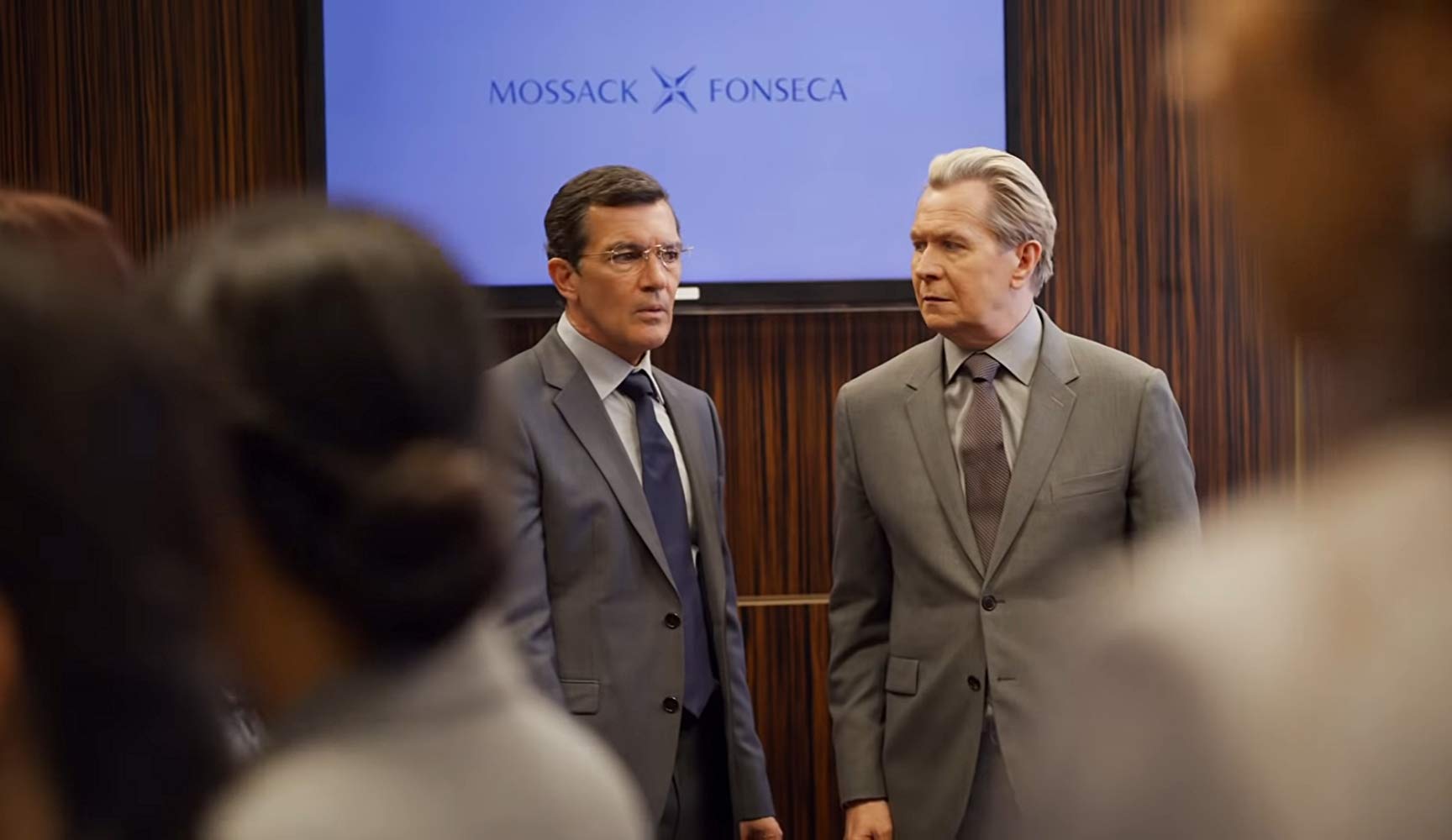 In The Big Short, Adam McKay used narration with fourth wall-breaking to frame his story and translate complex terms into understandable language. Soderbergh does something similar here. Mossack and Fonseca begin by exploring the building blocks of money and financial transactions (starting with the aforementioned cavemen) and continuing into modern day. They address the audience directly and, at one point reference the “movie’s director” and “writer.”

One could argue that Soderbergh gets too cute for his own good. The narrative is so convoluted that, while it’s easy enough to keep track of the individual episodes, it can be confusing to piece everything together and see the bigger picture. The Panama Papers leak is introduced late in the proceedings and feels more like an add-on appendage than the natural climax of a storyline. There are times when this scattershot approach is more frustrating than fulfilling.

Soderbergh made The Laundromat for Netflix and is on record as saying that he doesn’t care whether anyone sees it in a theater. Having watched it on the big screen, I can attest that it should work in any medium (although there were a couple of scenes when I would have liked to hit the “rewind” to get a repeat of a technical explanation). When it comes to releasing movies, however, the gods of timing are on The Laundromat’s side. What better season could there be to premiere a film focused on corruption and the actions of a whistleblower?