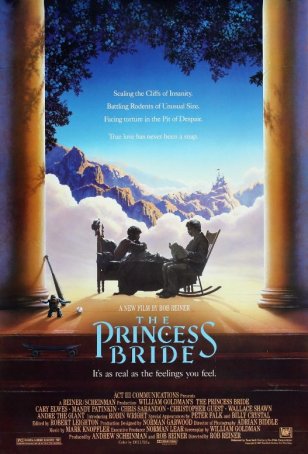 "My name is Inigo Montoya. You killed my father. Prepare to die."

When William Goldman wrote those words, he did not intend for them to become a fragment of '80s pop culture. When Mandy Patinkin spoke those words, he didn't expect his every inflection to be endlessly mimicked. And when Rob Reiner directed those words, he had no idea that kids and young adults everywhere would be repeating them. Nevertheless, there's no doubting that nearly every movie-going American is familiar with those three short sentences. Reiner has stated that, along with "I'll have what she's having" and "You can't handle the truth," this represents one of the three most often quoted excerpts of dialogue from his movies.

But those lines are only a very small part of what makes The Princess Bride such a special motion picture. And, for those who crave features that can be enjoyed by every member of the family (grammar school kid, teenage troublemaker, tough-to-please twenty-something, beleaguered mom and dad, and grumpy grandparents), there may be nothing better than this motion picture, which celebrates fairy tales and true love with its tongue firmly planted in its cheek. This is what happens when stories of heroism and derring-do collide head-on with a Monty Python sensibility. Best of all, despite its satirical bent, The Princess Bride can still be enjoyed on the simpler level of the story of a princess being rescued by her one true love.

The Princess Bride is constructed as a story-within-a-story, with the framing scenes occurring in the "real world" as a grandfather (Peter Falk) stops by to read a story to his sick grandson (Fred Savage). During these scenes, Reiner makes a statement about the value of books over electronic forms of entertainment. When the grandfather arrives, his grandson is playing a video game, a blank expression on his face. But, once the story takes flight in his imagination, he is absorbed and transfixed - transported to another time and place in a way that even the best electronic game cannot accomplish.

The primary narrative, which evolves as the grandfather reads it (and occasionally interrupts it to intersperse comments or skip over boring parts), takes place in the magical land of Florin, and tells of the true love between peasant girl Butercup (Robin Wright, years before marry Sean Penn) and stablehand Westley (Cary Elwes). After declaring their unending affection for each other, they are separated, and Westley is reported dead. Buttercup, cold-hearted and stone-faced after her loss, is chosen by the crown prince, Humperdinck (Chris Sarandon), to be his bride. Humperdinck's motives, however, are not pure. He intends to arrange for Buttercup's abduction, frame rival country Guilder for her murder, and start a war with the backing of the common folk, who love their princess-to-be. To this end, he hires three rogues to capture Buttercup: the wily Sicilian Vizzini (Wallace Shawn), who fancies himself to be the smartest man in the world and has a fondness for the word "inconceivable;" the giant Fezzik (Andre the Giant), who is dumb, kind-hearted, and humungous; and the swordsman Inigo Montoya (Mandy Pantankin), who is scouring the world in search of the six-fingered man who killed his beloved father.

Vizzini, Fezzik, and Inigo kidnap Buttercup one day when she's out riding. Heading for the Guilder/Florin frontier, they spirit her away by boat. Hot on their trail is the ship of the Dread Pirate Roberts (a.k.a. The Man in Black). He pursues them to the Cliffs of Insanity, where he engages in a duel of steel with Inigo, a wrestling match with Fezzik, and a match of wits with Vizzini to win Buttercup. Once she is in his custody, he reveals himself to be Westley. Fleeing Humperdinck and his lackey, Count Rugen (Christopher Guest), Buttercup and Westley enter the dreaded Fire Swamp, where the ROUS (Rodents of Unusual Size) are only one of the dangers. And, once they get out, there's still Humperdinck to deal with. Fortunately, Westley and Buttercup are not without allies. Fezzik and Inigo have joined them, and there's also help from a wizened old dwarf named Miracle Max (Billy Crystal), who harbors no love for Humperdinck or Rugen.

For director Rob Reiner, The Princess Bride represented the fourth of seven consecutive commercial and critical successes (a streak that began with 1984's This Is Spinal Tap and ended with 1992's A Few Good Men). The tone owes more to Spinal Tap than to any of Reiner's other outings ? it is witty and irreverent without ever going so far over-the-top that it turns the proceedings into camp. Reiner manages the difficult yet ultimately rewarding task of creating a movie that simultaneously parodies a genre while also celebrating and participating in it. At the instance of The Princess Bride's most satisfying emotional climax (it has something to do with Inigo), the applause accorded the moment is heartfelt and genuine. Despite the satirical edge and the fantastic setting, we come to care about these individuals.

The film is based on the book by William Goldman, who wrote his own screenplay adaptation. Before Reiner (backed with financing from his old "All in the Family" buddy, Norman Lear) came along, Goldman had been trying for 15 years to get the movie made. (At one point, Norman Jewison was attached to the project.) After watching Spinal Tap and The Sure Thing, Goldman decided that Reiner was the man for the job. Years later, he would comment that he was only fully satisfied with the motion picture versions of two of his scripts: Butch Cassidy and the Sundance Kid and The Princess Bride.

The average family film is targeted primarily at children, with a few elements thrown in to go over the youngsters' heads and appeal to their parents. (Many Disney films fit into this category.) The crafting of The Princess Bride, however, is superior. Nearly every aspect of the film delights all potential viewers. The sword fight between Inigo and Westley, for example, offers equal thrills to 7-year olds and 37-year olds (although the verbal repartee that accompanies the physical struggle will resonate more with older viewers). Incidentally, that particular sequence, arguably the best screen fencing battle in film history (including those from the likes of Errol Flynn and Douglas Fairbanks), is notable for its lack of stunt doubles. All of the action (except a couple of acrobatic flips) is performed by the actors, not stunt doubles. Mandy Patankin and Cary Elwes studied for months to be able to pull off this struggle convincingly.

Everyone who has seen The Princess Bride has a favorite scene, and it's a testimony to the film's start-to-finish strength that nearly every minute of the movie's running length is on someone's list. The candidates are wide and varied, ranging from the Inigo/Westley swordfight to the battle of intelligence with Vezzini to the Pit of Despair to the visit to Miracle Max's to the storming of the castle and the duel with the six-fingered man. There is little, if anything, in The Princess Bride that doesn't work. Reiner hits all the right notes, and it would be impossible to achieve a better overall tone.

There isn't a bad casting choice, either. Robin Wright and Cary Elwes were selected as much for their good looks as for their acting ability, and they prove to be a superior romantic couple. Wright, despite being California bred, affects a flawless British accent. Elwes is equally at home with comedy, action, and drama. Mandy Patankin, playing Inigo, matches Elwes' athleticism and develops a character who is instantly sympathetic (despite initially being a "bad guy"). Andre the Giant represents the mighty Fezzik as a lovable brute, and Wallace Shawn is hilarious as the egotistic Vizzini, whose end is inconceivable. Chris Sarandon elevates Humperdinck's pomposity to amazing levels, and Christopher Guest underlies Rugen's cowardly ways with a sense of the sinister. The Billy Crystal/Carol Kane cameo offers some of The Princess Bride's biggest guffaws. (Reportedly, Reiner had to leave the set during the filming of these scenes, because Crystal's ad-libs were causing him to laugh so hard he was becoming nauseated.)

Although children generally appreciate The Princess Bride's pseudo-fairy tale narrative and action-oriented approach, much of the dialogue is designed for adults. Mostly credited to Goldman (except the Crystal ad-libs), it's brilliant stuff. The quips traded by Inigo and Westley during their duel are as impressive as the actual swordsmanship. Vizzini's double-talk about which cup is poisoned (during the battle of wits) needs to be listened to several times before it begins to make twisted sense.

Since its release more than 15 years ago, The Princess Bride has often been copied, but never equaled. Perhaps the most successful movie to capture its essential spirit was the animated Shrek. The word "brilliant" is often overused in the movie business, but this is one of those occasions when it is warranted. The Princess Bride is an unparalleled achievement ? a modern classic that will be enjoyed for generations to come. It has been called the "Generation X's version of The Wizard of Oz," and, more than any other description, that comes the closest to identifying this movie's impact.