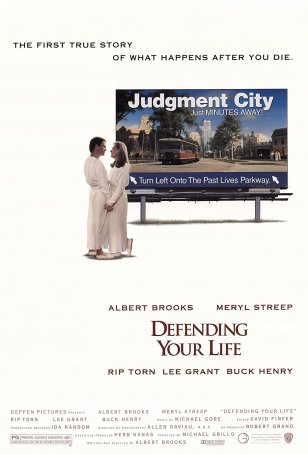 Most people believe in some form of an afterlife, although the specifics vary from individual to individual. In scripting Defending Your Life, Albert Brooks approached the subject from more of a philosophical than a religious/spiritual perspective. God and angels don’t come into it. In this milieu, there’s a Judgment Day, but it’s not about going to heaven or hell. Instead, it’s about whether one is reincarnated to live another life on Earth or sent to the next plane of existence. To implement the story, Brooks uses his typical low-key comedic approach, which is more thoughtful than laugh-provoking. The movie is funny in an intellectually appealing fashion, eschewing the manic style embraced by many actor/comedians. And the love story helps to soften and humanize a man who comes across pretty much as a self-centered jerk.

Upon its March 1991 release, Defending Your Life didn’t find much box-office love. It was well-liked by critics (Roger Ebert, for example, gave it 3.5 out of 4 stars and called it “warm” and “fuzzy”) but the movie-going public was unimpressed. It may be that Brooks was out-of-step with the times; his brand of humor was in direct contrast with that of the likes of Jim Carrey, Adam Sandler, and the Farrelly Brothers, who would come to prominence during the 1990s. I suspect that a movie with these aspirations might do better today.

The prologue introduces us to Daniel Miller (Brooks), a divorced advertising agent who has just used his earnings to buy a BMW convertible. On the way home from the dealership, he’s fiddling with the CD player and not paying attention to the road, which results in a head-on collision with a bus. The next thing Daniel knows, he’s in the afterlife. Judgment City doesn’t look a lot different from New York or Chicago and the hotel where he’s staying is very Holiday Inn-like. 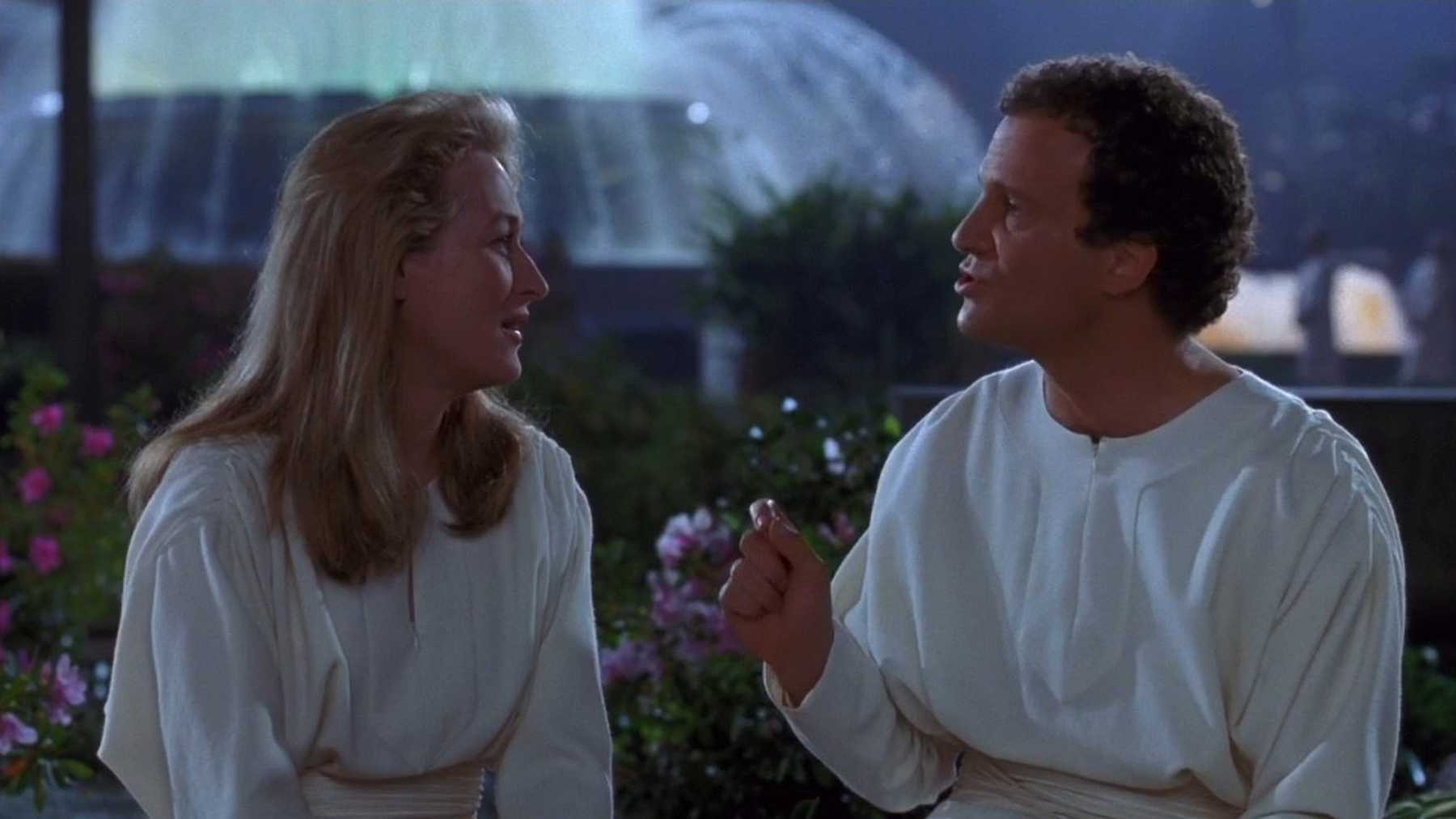 After spending a night recovering from the transition, Daniel gets a call to meet Bob Diamond (Rip Torn), his advocate in the upcoming judgment hearing. Bob gives Daniel the rundown about what’s going to happen – over the next four days, he will defend his life in front of a two-judge tribunal to determine whether he is worthy of moving on or whether he needs a little more “seasoning.” There will also be a prosecutor, Lena Foster (Lee Grant), who is regarded as one of the best at blocking forward progression. It’s all about brain size. Human beings use about 3-5% of their capacity (well below the oft-repeated threshold of 10%, which has been debunked), earning them the derogatory nickname of “Small Brains.” But “Big Brains” like Bob have evolved to where they can use upwards of 40%, 50%, or more. No longer suited to the limitations of life on Earth, they have moved to a more celestial existence.

During Daniel’s first evening in Judgment City, he meets Julia (Meryl Streep), a recently deceased woman. Their attraction, although admittedly occurring at the most inopportune of times, is strong and instantaneous. It’s apparent to Daniel that Julia has a ticket to advancement but, despite his obvious faults, she is as smitten with him as he is with her. Things don’t go well for Daniel at his hearing, despite encouragement from the always-jovial Bob or his more laid-back temporary replacement, Dick Stanley (Buck Henry), but his evening assignations with Julia take his mind off things. 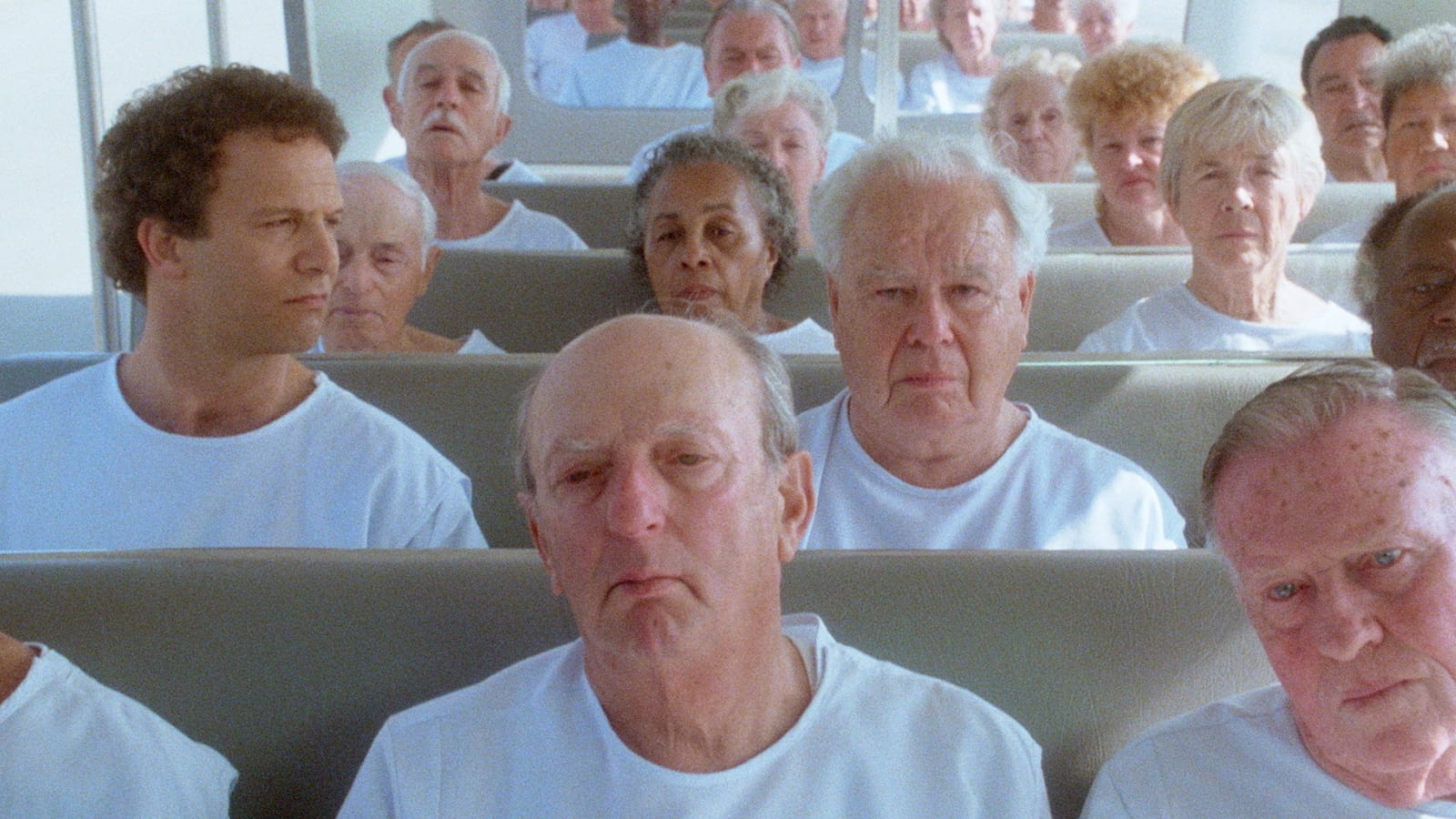 Brooks’ view of the afterlife (obviously constrained by budgetary limitations) makes sense from a certain perspective. While elaborately designed sets with harpsichords and puffy clouds might hold an aesthetic appeal, Judgment City’s spartan layout, which approximates a late 20th century city, offers familiarity. The mundane provides comfort to those struggling not only with the transition but with the stress of the trial. Brooks injects some humor by creating a class system among the souls. Those most likely to move on are placed in an upscale hotel (with an in-bathroom jacuzzi) while those with more dubious futures get the Holiday Inn accommodations (with mints on the pillow every night).

Defending Your Life was released at a time when “carpe diem” movies were in vogue. (Other notable examples include Dead Poets Society and Strictly Ballroom.) Brooks taps into this vein – the key to proving the bigness of one’s brain is a lack of fear. Consequently, the main feature of Daniel’s trial isn’t whether he was a “good” person or showed kindness and generosity, but whether he was brave and took chances. When Lena points out his timidity in investing money, he argues that he wasn’t greedy. She rebuts that it isn’t about greed; it’s about risk-aversion. 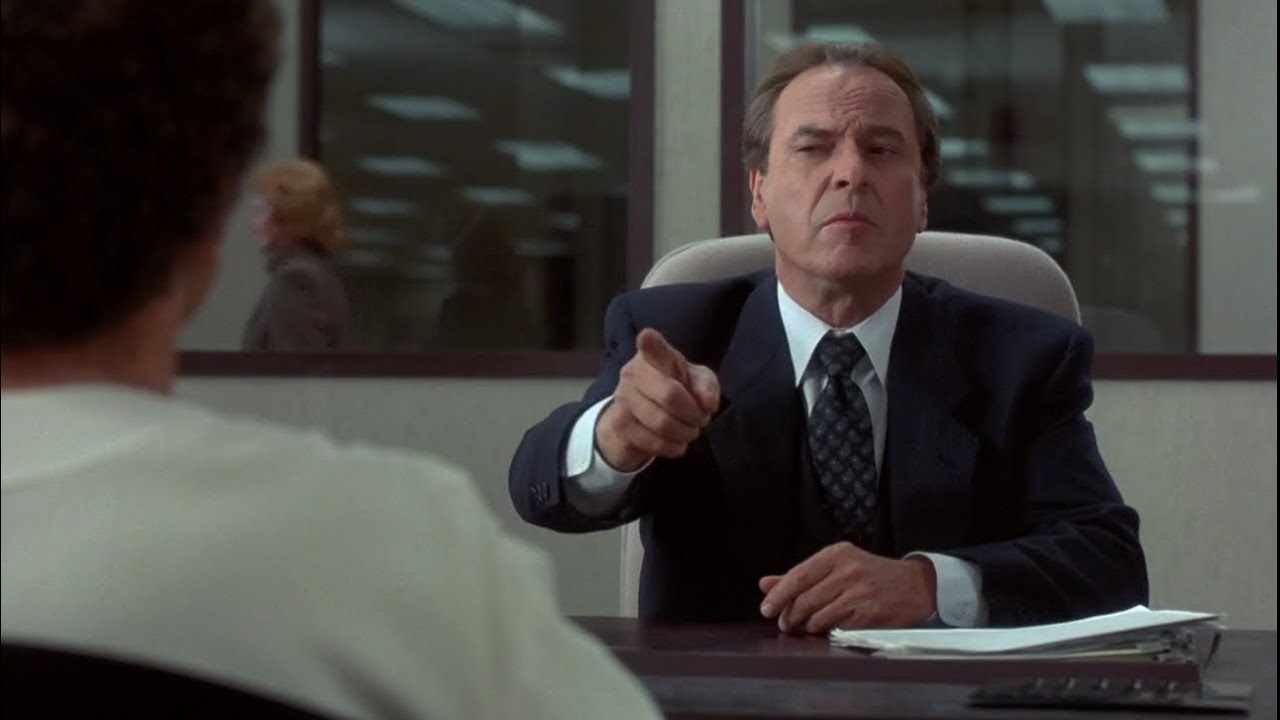 Defending Your Life is blessed with a near-perfect cast for the material. Brooks, like Woody Allen, is known for using his movies as a form of therapy and his self-deprecating demeanor works perfectly in this case: a man looking back on his life and trying to rationalize decisions and choices that, in retrospect, don’t look great. Perhaps surprisingly, the dour actor evinces strong chemistry with Meryl Streep and, although the love story is a subplot, it’s an important one. Streep was at a point in her career where, although recognized as one of the best working actresses, she wasn’t yet Meryl Streep™. Rip Torn is deliciously larger-than-life, always ready with a toothy smile. And, although Buck Henry doesn’t have a large role, his straight-faced approach is delightful.

Those who expect comedies to be consistently uproarious and replete with slapstick and physical jokes may be nonplussed by what Defending Your Life has to offer. Brooks offers humor that targets the brain rather than the gut. There are some laugh-out-loud moments (the visit to the Hall of Past Lives, with a Shirley MacLaine cameo, is a highlight) but the primary tone is “amusing” rather than “hilarious.” There’s a distinct benefit to this – while even the best frantic comedies often lose steam around the 90-minute mark, Defending Your Life is able to keep going for nearly two hours without wearing out its welcome or provoking a bout of fidgeting. Defending Your Life may have disappointed its financial backers at the time of its original release but, as is often the case with movies of this sort, time has enhanced its reputation.