Blade of the Immortal (Japan/United Kingdom, 2017) 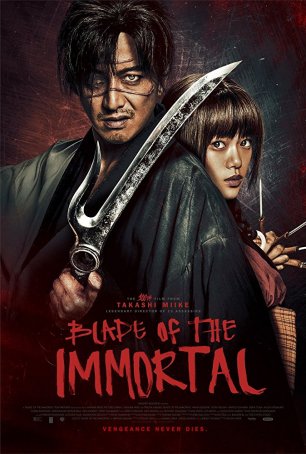 Japanese director Takashi Miike has spent a career bucking conventions and thumbing his nose at censors. From his first foray into directing in 1991, he has become a lightning rod for controversy – a role he enjoys. His films are bloody and brutal, often with long, elaborate fight scenes that don’t spare the viewer lovingly shot images of blood, gore, and viscera. Although he has a preference for yakuza/gangster themes, his filmography is varied. Blade of the Immortal, for example, is a fantasy/samurai movie – sort of a Kurosawa on steroids. It is being touted as “Miike’s 100th film” and, while one could argue whether the numbering is strictly correct, it’s close enough to be reasonable. Here’s to another 100.

Blade of the Immortal is based on a 30-volume manga by Hiroaki Samura that ran for nearly 20 years starting in 1993 (in the United States, it was published by Dark Horse Comics). Considering the size of the source material, there’s no way that Miike and his screenwriter, Tetsay Oishi, could hope to capture the entire story in a 140-minute movie, so they have opted to concentrate on the highlights. The film is straightforward, compensating for its lack of narrative complexity with Miike’s trademark graphic fight sequences. Although the bloodbaths are expertly choreographed, the director doesn’t take himself too seriously. There’s a fair amount of (gallows) humor to be found. For example, in one scene, two unkillable warriors face off, each delivering an endless barrage of mortal wounds to the other that are shrugged off. (I was reminded of The Black Knight in Monty Python and the Holy Grail.) I wondered what might happen in the event of a decapitation but Miike doesn’t go that route.

The movie opens with a short black-and-white sequence that transpires 50 years prior to the main story and provides key background information about the main character, samurai warrior Manji (Takuya Kimura). Following a long, bloody battle in which he fails in his charge to protect the life of his younger sister, Machi (Hana Sugisaki), he is badly wounded. A robed and hooded woman approaches and curses him with immortality by infecting his body with “bloodworms” that will heal (think Wolverine) almost any wound.

Blade of the Immortal’s main story has Manji serving as the bodyguard for his sister’s doppelganger, Rin Asano (also played by Hana Sugisaki), during her quest to avenge the death of her parents at the hands of master swordsman Anotsu Kagehisa (Sota Fukushi), who is in the process of making a power-play. His intention is to take over all the dojos in Edo (Tokyo during the 18th century). In order to confront Anotsu, Manji and Rin must fight their way through a series of battles with Anotsu’s underlings and minions, some of whom are formidable. Being immortal gives Manji an obvious advantage (especially since is stabbed through the heart with alarming frequency) but his resurrections are painful, especially after being wounded by a weapon coated with a bloodworm-killing poison. 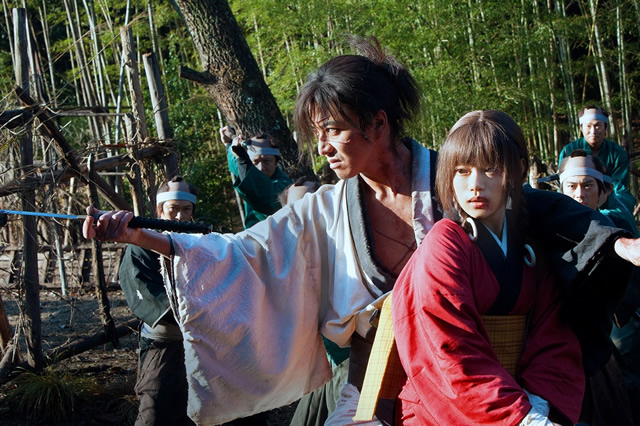 The style and approach are pure Miike. The battle scenes are whirlwinds of chaos and carnage. They aren’t beautiful in a traditional sense but they are masterpieces of brutality. Takuya Kimura, a recognizable face in Japan who was cast against type for this role (he has a squeaky-clean image), is credible as the tortured Manji, whose solution to his immortality is to become a hermit. Beneath the scars, Kimura is a gifted performer when it comes to embodying an anti-hero seeking a path of redemption. Equally capable is Sota Fukushi as the antagonist Anotsu, whose backstory and connection to Rin almost make him sympathetic. The weak link is Hana Sugisaki, whose portrayal of Rin is strident and over-the-top.

Although the battle scenes are bottled adrenaline, the movie is overlong. The climax is delayed by too much exposition and too many preliminary struggles. I recognize that some of this is as a result of the filmmakers trying to shoehorn in many disparate elements from the manga but it becomes unwieldy. Nevertheless, as one would expect from the product of the iconoclast director, Blade of the Immortal delivers the kind of jolt that will excite film festival Midnight Madness audiences worldwide as well as those who seek this out during its theatrical and/or home video life.

Blade of the Immortal (Japan/United Kingdom, 2017)