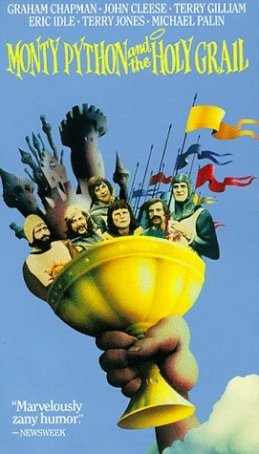 One of the questions I am frequently asked by e-mail is "What is your favorite comedy?" In a horse race that's almost too close to call, I have decided upon A Fish Called Wanda, followed closely by The Life of Brian, then Monty Python and the Holy Grail. Astute movie-goers will recognize the obvious connection: all three of these films feature members of the Monty Python comedy troupe (A Fish Called Wanda was written by John Cleese, and starred Cleese and Michael Palin; and The Life of Brian was the Pythons' follow-up to The Holy Grail). This obviously says something about my taste in comedy. (It's also worth noting that my favorite TV sit com was Cleese's "Fawlty Towers".)

In 1975, when The Holy Grail reached theaters, Monty Python was still something of a cult phenomenon on this side of the Atlantic. "Monty Python's Flying Circus" had been introduced several years earlier, but it was far from well-known, and many areas of the country had not yet been exposed to it. Over the span of the last 25 years, the Pythons have gone from living on the fringe to becoming an embedded staple of mainstream culture. Today, it's hard to find anyone under the age of 45 who hasn't at least heard of Monty Python. And The Holy Grail, which started life as a low-budget, throw-away comedy, has turned into a classic of its genre.

Many of fans' favorite Python moments come from The Holy Grail. Granted, this movie isn't the place to find Michael Palin singing "The Lumberjack Song" or exclaiming, "No one expects the Spanish Inquisition!", John Cleese doing his silly walks, or people singing about the virtues of Spam. But it is where we meet a group of Medieval peasants bringing out the dead and being repressed, a black knight who doesn't know the meaning of the word "quit", a taunting Frenchman, the knights who say "Ni", a bunny with a nasty appetite, and a gatekeeper who has three tricky questions to ask. Plus, there are two classic Python songs ("Knights of the Round Table" and "The Ballad of Sir Robin") and several new animated interludes from Terry Gilliam.

Monty Python and the Holy Grail represented a chance for the Pythons to re-unite after the end of their TV series. Outside of the group, some had enjoyed greater success than others (Palin and Cleese in particular), but, when they gathered together to hash out the storyline of a King Arthur spoof, they meshed as well, if not better, than ever. The final two seasons of "Monty Python's Flying Circus" often felt tired and frequently missed the spark of the early episodes, but, with The Holy Grail, the verve and energy was back again, as if the time off had given the Pythons the opportunity to rejuvenate the comedic creative abilities.

Monty Python and the Holy Grail opens with some of the most innovative credits ever to grace the big screen. With a somber score playing the background, they start off deceptively normally, but it isn't long before the first wrinkle appears: faux Swedish subtitles. Soon, the subtitles are no longer translating the credits, but extolling the virtues of the Moose. Then, everything grinds to a halt, and this message appears: "We apologize for the fault in the subtitles. Those responsible have been sacked." Then it's back to the credits, with bogus names being added for everything from "Moose Costumes" to "Moose trained to mix concrete and sign complicated insurance forms". Another abrupt halt brings up this apology: "The directors of the firm hired to continue the credits after the other people had been sacked, wish it to be known that they have just been sacked. The credits have been completed in an entirely different style at great expense and at the last minute." Then, things finish up with the last credits appearing on screens that flash a variety of gaudy colors.

It's difficult to imagine a stronger beginning, but the film's irreverent humor doesn't flag as we get into the action, which sees King Arthur (Graham Chapman) riding around the countryside gathering supporters. There's a problem, though. Instead of sitting atop an impressive steed, Arthur mimes riding one while his trusted servant knocks together coconuts to mimic a horse's clomping sound. (This continues throughout the movie.) Arthur doesn't encounter universal support - peasants argue that his kingship is the result of an arbitrary and unfair method of choosing a ruler ("Listen, strange women lyin' in ponds distributin' swords is no basis for a system of government! Supreme executive power derives from a mandate from the masses, not from some farcical aquatic ceremony!") and that he's repressing them. Others doubt his authenticity. Then there's the infamous Black Knight, who wants to prevent Arthur from crossing a particular bridge, even after the king has cut off his arms and legs. Finally, Arthur gathers a band of brave knights, including Sir Launcelot (John Cleese), Sir Galahad (Michael Palin), Sir Bedevere (Terry Jones), and Sir Robin (Eric Idle). After given a quest by no less than God, the five men, along with their retainers, split up and seek the Holy Grail. Along the way, they encounter a variety of dangers, with Sir Launcelot slaughtering a group of wedding guests, Sir Galahad falling into the clutches of a bevy of sex-starved women, and Sir Robin fleeing danger while his minstrel companions sing of his cowardice.

As was true in "Monty Python's Flying Circus", the members of the comedy troupe assume numerous roles - in some cases, as many as eight or nine. Even Terry Gilliam, often referred to as the "Forgotten Python" (or the "American Python") has some screen time (albeit in small parts). However, Gilliam's primary function in the movie (aside from co-directing it with Terry Jones) is to have designed the animated sequences which punctuate (and, in some cases, advance) the action. As in the TV series, Gilliam's animation has a distinctive look and feel.

It is a pleasure to see all of the Pythons together in a medium other than "Monty Python's Flying Circus". By 1975, their careers were beginning to take them in different directions. John Cleese and then-wife Connie Booth made the first season of "Fawlty Towers" around the same time as The Holy Grail; Cleese would then go on to greater international visibility through a series of motion pictures. Eric Idle also had his own weekly TV series, "Rutland Weekend Television", which achieved a degree of popularity in England; he too eventually achieved fame through movies. Michael Palin was two years away from "Ripping Yarns." The two Terrys, Jones and Gilliam, moved into directing with The Holy Grail (Jones would eventually helm the other two Python movies; Gilliam did Time Bandits and Brazil, amongst others). Only Graham Chapman (who died of throat cancer in 1989) seemed largely content to stay away from work in between Python outings. Even after the final Python movie, 1983's The Meaning of Life, the actors continued working together on a fairly regular basis: Idle, Cleese, and Chapman in Yellowbeard; Cleese and Palin in A Fish Called Wanda and Fierce Creatures; Jones and Cleese in Erik the Viking; Cleese and Idle in Splitting Heirs; Idle, Cleese, Jones, and Palin in The Wind In the Willows; and Idle working under Gilliam's direction in The Adventures of Baron Munchausen.

Monty Python and the Holy Grail features the same kind of brilliant comic writing that characterized the best episodes of the television series. Everything, from Marxist rhetoric to scientific observations to religious doctrine, takes a beating. Most comedies saturate the audience with gags and jokes in the hope that one-third to one-half of the material might be funny. But, in The Holy Grail, there's hardly an attempt at humor that fails. That's a rare claim for any movie to make, but, even when a viewer isn't laughing aloud at this film, he or she will almost certainly appreciate the incisive intelligence evident in the Pythons' approach. The quality of the humor - irreverent, smart, and challenging - is one of the things that differentiates Monty Python and the Holy Grail from so many other motion picture comedies.

If the film has a weakness, it's in the ending. Monty Python and the Holy Grail really doesn't end, at least not in a fully satisfactory manner. Apparently, finding an appropriate wrap-up was a bone of contention for the Pythons, since the originally scripted finale (in which King Arthur and his knights discovered the Holy Grail in Harrod's Department Store) was abandoned. The filmed version is undeniably unique and off-beat, but it's not especially memorable. Nevertheless, the more one thinks about it, the more in keeping with the Python tradition it seems to be.

Nearly every aspect of the film is designed to enhance the overall effect. The heroic musical score, for example, is intentionally undermined by the on-screen shenanigans and the gray, dismal atmosphere. The film even makes fun of its set design and model work. Consider the scene in which Arthur and his knights first see Camelot. As they gaze upon the distant castle, Arthur's trusty servant comments, "It's only a model."

Even the trailer to The Holy Grail was crafted with far more artistry than one normally encounters. In fact, this is quite possibly the most creative trailer ever made. Over the years, certain aspects of it have been copied, but never equaled. The trailer begins with auditions for a pompous voice-over. The eventual winner is a Chinese man who extols the virtues of Bergman and Kurosawa while berating The Holy Grail as silly fare for intellectual midgets. All of his narration is in Chinese, with subtitles. We are shown a few clips from the film, then are treated to a bizarre parody of Bergman's The Seventh Seal. The trailer closes with a plug for a restaurant. Today, twenty-five years after its production, this preview remains fresh, original, and hugely entertaining.

Of course, the Python brand of humor is something of an acquired taste, and is not for everyone. I have known people who can sit through the "Dead Parrot Sketch" episode of "Monty Python's Flying Circus" and not once crack a smile. The first time I saw The Holy Grail, I was convulsed with laughter for practically the entire running length. Now, six or seven viewings later, I still smile and chuckle. Regardless of where an individual's comedy zone lies, it's impossible to deny the intelligence of the script, and the movie's willingness to take chances and be different. Those qualities alone should be enough for even a humor-impaired viewer to find something to like about Monty Python and the Holy Grail. And, for those who "get" the jokes, this motion picture represents one of the best and brightest comedies ever to shine from the silver screen.