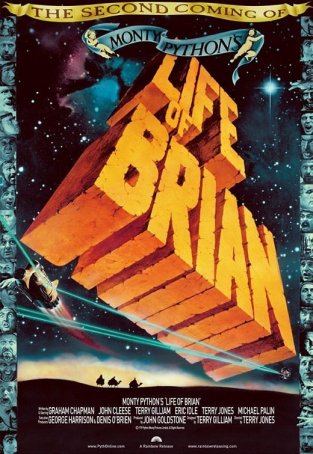 Each of the three "official" Monty Python movies has its own distinguishing quality. The first, 1975's Monty Python and The Holy Grail, is arguably the funniest and (in some ways) the silliest. The last, 1983's The Meaning of Life, is the most uneven. The middle film, The Life of Brian, may not have as many laugh-aloud moments as The Holy Grail or The Meaning of Life, but it is more pointed in its satire than either, and, beneath the comedy, there's real substance to this motion picture. Don't look now, but there's some preaching going on… albeit as only Monty Python can do it. And now for something completely different, indeed.

When The Life of Brian was first released in 1979, it caused an immediate uproar - much to the delight of Pythons Graham Chapman, John Cleese, Terry Gilliam, Eric Idle, Terry Jones, and Michael Palin. The Catholic Church wasted no time condemning it as blasphemous (even though almost none of those at the forefront of the boycotts had watched the movie). Countries banned it, often resulting in its becoming an underground cult classic. The movie was almost universally seen as an attack on Jesus and Christianity. Of course, the reality - as those who bothered to see the movie quickly discerned - is that none of the Pythons' barbs are aimed at Christ. In fact, during the two scenes in which he appears (as a baby in the manger and giving his famous "Sermon on the Mount"), he is treated with respect. The Life of Brian never mocks Jesus, because, as John Cleese later remarked, there's nothing about him that one can make fun of.

The primary target of The Life of Brian's satirical skewering is organized religion and the hypocrisy it often breeds. The film also lampoons religious fanatics who refuse to think for themselves, the bureaucracy inherent in governing bodies, and, in a more subtle sense, Hollywood biblical epics. As always, the Pythons mix smart, insightful humor with pithy dialogue and outrageous silliness. There's also a deus ex machina of the third kind, a stab at full frontal nudity equality, and the group's sole pop hit ("The Bright Side of Life").

The story postulates a parallel life to Jesus'. Just a few mangers away, a boy named Brian Cohen (Graham Chapman) is born. His mother, Mandy (Terry Jones), is no virgin Mary, however. That doesn't stop the Three Wise Men from delivering their gifts. However, when they recognize their mistake, they take back the gold, frankincense, and myrrh, and bring the presents to Jesus. Roughly 30 years later, Brian is a typical nobody living in Palestine - until he joins the People's Front of Judea. After proving himself, Brian earns the trust of the leader, Reg (John Cleese), and is allowed to participate in an attempted kidnapping of Pontius Pilate's wife. The plot fails, but Brian, after escaping from Pilate, ends up amassing a huge following of people who believe he is the Messiah. The Romans capture him and crucify him, and, despite many opportunities, no one rescues him from the cross.

It's actually easier to summarize the events of The Life of Brian than those of The Holy Grail, which was looser on plot, or The Meaning of Life, which had no narrative cohesiveness whatsoever. Although the storyline in The Life of Brian exists merely as a means by which the Pythons can make their points and generate laughs, it is linear and seems like more than just a loose framework for comedy sketches. Plus, by allowing nearly all of the characters to be filthy and by avoiding the sanitized look of most Bible-inspired epics, The Life of Brian can actually boast a more realistic appearance than, say, Ben Hur. (Some might go so far as to argue that The Life of Brian, in its unpretentiousness, is more honest than the pompous, self-important Charlton Heston picture.)

For those in search of pure, zany Monty Python-style humor, The Life of Brian boasts a number of standout sequences. The first (and arguably the best) of these occurs at the stoning of a blasphemer, which is attended by a crowd of women pretending to be men (and, since many of those "women" are actually men to start with, it's really men impersonating women impersonating men). The Pharisee overseeing the execution is played with zeal by John Cleese, and, as the proceedings gather steam, he becomes increasingly frantic. It's a classic Cleese moment. Then there's the whole Pontius Pilate/Biggus Dickus situation, which generates its comic momentum from the premise that the two most influential Romans in Jerusalem speak with speech impediments.

The most offbeat sequence in The Life of Brian owes its genesis to the late-'70s popularity of Star Wars and the resurgence of science fiction. In what amounts to an irrelevant homage to all things involving space ships and aliens, the movie has Brian being rescued from dangerous circumstances by a passing space ship. After a brief dogfight, the ship crash lands in virtually the same place where it picked up Brian, and the earlier chase continues. In addition to poking fun at science fiction elements, this part of the movie smirks at the popular deus ex machina convention that uses extreme plot contrivances to rescue characters from impossible situations.

The movie's attitude towards those who follow religious doctrine without thought or rational consideration is ruthless. The entire "Brian as Messiah" subplot is designed to point out the superficiality of blind fundamentalism. The deepest meaning is ascribed to every word or action of Brian's, even though he repeatedly states that he is not the Messiah. His followers quickly split into squabbling factions. One group believes that the path to truth lies through Brian's abandoned gourd. And, when Brian loses a sandal running from a mob, a second group decides that they should all proceed with only one shoe.

Another source of humor comes from the warring anti-Roman factions within the Jewish community. For example, the People's Front of Judea (PFJ) are horrified when they are mis-identified as the Judean People's Front, a rival group. There's also a tremendous amount of red tape involved in every action taken by the PFJ. In the end, they never do much of anything. When Brian hangs on a cross at the end, instead of acting to save him, they arrive and sing a chorus of "For He's a Jolly Good Fellow."

During the course of The Life of Brian, the Pythons strike a blow for the equality of the sexes in movie nudity. Both Graham Chapman and Sue Jones-Davies are shown in the altogether. The Chapman scene is hilarious. Completely naked, Brian opens the shutters on his bedroom window and is confronted by a huge throng of followers. However, Jones-Davies' full-frontal scene is gratuitous. One can only assume it was included to even things out.

Offbeat songs have always been a Python trademark, going back to "The Lumberjack Song" from "Monty Python's Flying Circus." The Holy Grail features "Knights of the Round Table" and "Brave Sir Robin." The Meaning of Life is a quasi-musical, with about seven numbers (including one big song-and-dance production). The Life of Brian contributes two songs - the title track and Eric Idle's "The Bright Side of Life," which gained such unexpected popularity that it became a surprise entry to the pop charts, and to this day is still used on some radio stations as a daily or weekly sign-off. Of course, when played on U.S. radio, the song gets the "shit" bleeped out of it.

The Life of Brian represents a reunion for the members of the Python troupe, who had disbanded during the mid-'70s. There's still a sense of camaraderie and improvisation in their approach (something missing from The Meaning of Life), and it shows in the way they interact on-screen and in the flawlessness of their comedic timing. Everyone except Chapman has at least a half-dozen roles, with Palin essaying nearly twice that many. Even Chapman, who spends most of the time as Brian, gets two supplementary parts: as one of the Wise Men and as Biggus Dickus. (Cleese had originally wanted the lead role, but relented when the other Pythons convinced him that Chapman would make a better Brian.)

Those who equate Monty Python with elitist or intellectual humor may be interested to know that there is a fair amount of vulgar and crude comedy in The Life of Brian. In addition to the Bigus Dickus jokes, there are instances in which profanity is employed to generate laughter. Certainly, the Pythons never shy away from any four-letter words, but, on those occasions when the comedians use off-color language, it has the desired effect (shocking and humorous). Profanity is not used as a means to punctuate sentences. In The Life of Brian, there is a scene in which an exasperated Brian turns to a gaggle of his followers and exclaims, "Fuck off!" Their response: "How shall we fuck off, O Lord?" Taken in context, it's a very funny exchange.

The Python troupe gave birth to two directors: Terry Gilliam and Terry Jones. They co-directed The Holy Grail, but, since the arrangement proved to be cumbersome, it was decided that only Jones would helm The Life of Brian. (He headed The Meaning of Life as well.) Interestingly, post-Python, it is Gilliam, not Jones, who has had the most successful career. But, at least as far as The Life of Brian is concerned, Jones does a capable job as director. And, in addition to appearing in front of the camera (something he rarely did in the TV series), Gilliam handled the production design and was responsible for the animated opening title sequence.

There is little doubt that The Life of Brian represents some of the most daring and cutting edge comedy of the 1970s. It is a testimony to the force and timelessness of the material that it is as effective today as it was when it was initially released more than 20 years ago, and that, more than either of the other two Python movies, it stands up to multiple repeated viewings. Over the years, few comedies have dared to confront religious hypocrisy with the uncompromising fervor of this one (Kevin Smith's inferior Dogma is the only other one that immediately comes to mind), although the charges of blasphemy are both unfair and unfounded. It has been said that a Monty Python movie is only successful if it offends everyone in the audience at least once. By that measuring stick as well as nearly any other, The Life of Brian is an unqualified triumph. It makes us confront our foibles and laugh at them.