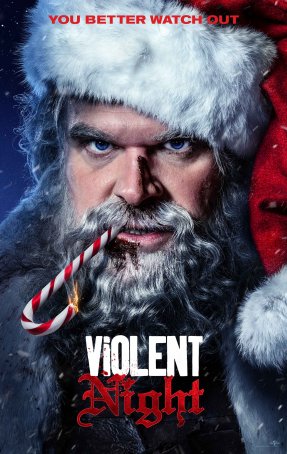 Violent Night, Tommy Wirkola’s contribution to the Santa Claus legend, is better than it has a right to be but not as good as it could have been. Using a similar premise to the one botched by 2020’s Fatman (with Mel Gibson as the Man in Red), Violent Night mixes comedy, gore, and action into a holiday-themed reimagining of the beloved Christmas classic Die Hard with an ode to that other beloved Christmas classic Home Alone (with a distinctly R-rated slant). There are no Rudolph or elves but there’s a sleigh, eight flying reindeer, a magical sack, a naughty/nice list, and a weapon fit to give Mjolnir hammer envy.

Santa (David Harbour) is about 1100 years old, having once been a feared Norse berserker who graduated to December 24 gift-giving as a result of the largely unexplained “magic of Christmas” (“I don’t understand it, either,” he says). Lately, though, he has become disillusioned by the rampant commercialism of the holiday and the entitled ingratitude of children. This Christmas Eve is going to be different, however, because he unwittingly becomes involved in a kidnapping/robbery and has to get in touch with the old warrior instincts in order to save a young girl, Trudy (Leah Brady), and her dysfunctional family from the clutches of uber-criminal Scrooge (John Leguizamo) and his band of Merry Men (and Women). 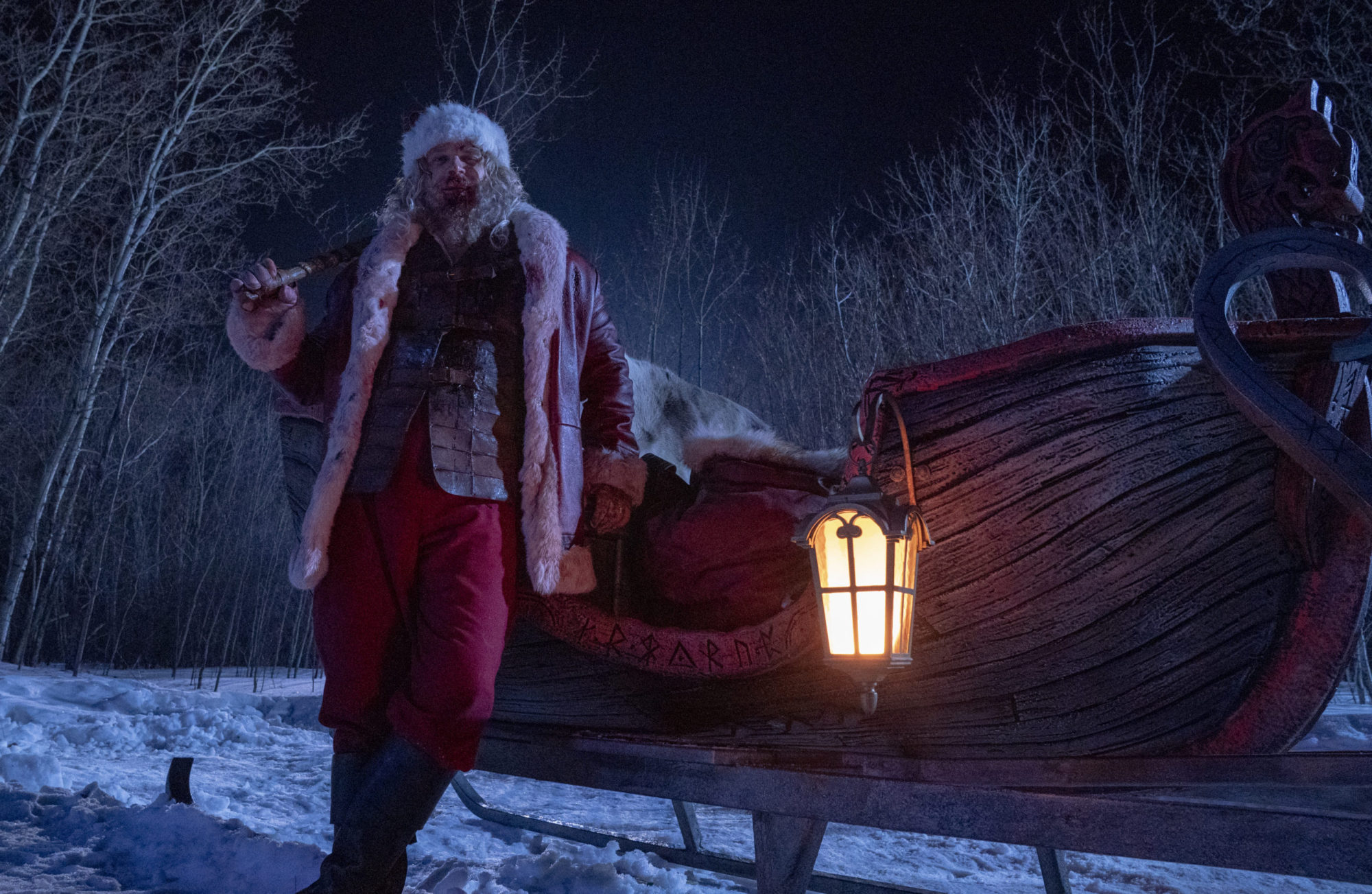 Violent Night is predominantly comedic in nature, although some of the violence can be tonally jarring. Wirkola doesn’t skimp on blood and viscera. Some of this stuff is quite funny – the Home Alone material in particular – but there are times when it seems too mean-spirited to generate laughter. The action material is, as is too often the case in action/comedies, neither exciting nor interesting. The snowmobile chase, for example, is a snoozer. The movie also spends too much time building the bond between Santa and Trudy. They have a walkie-talkie and, like Reginald VelJohnson’s Al to Bruce Willis’ John McClane, Trudy provides Santa with valuable intel about the bad guys. But their deep, meaningful conversations get a little too treacly. In a movie about Santa going medieval on his enemies, who wants sentimentality?

Comparing Violent Night with Die Hard does it a disservice because the two aren’t in the same league. Die Hard used a smart script to escalate the peril of a reluctant hero while emphasizing the intelligence of McClane and the villain. Violent Night lacks most of those qualities. Outside of the first two kills, the struggles are perfunctory, lacking ingenuity and energy. Throughout Die Hard, the filmmakers were constantly raising the stakes. But, in Violent Night, after taking out the first two invaders, things plateau. And Santa lacks a one-liner on the level of “Yippee Ki Yay, Motherfucker!” 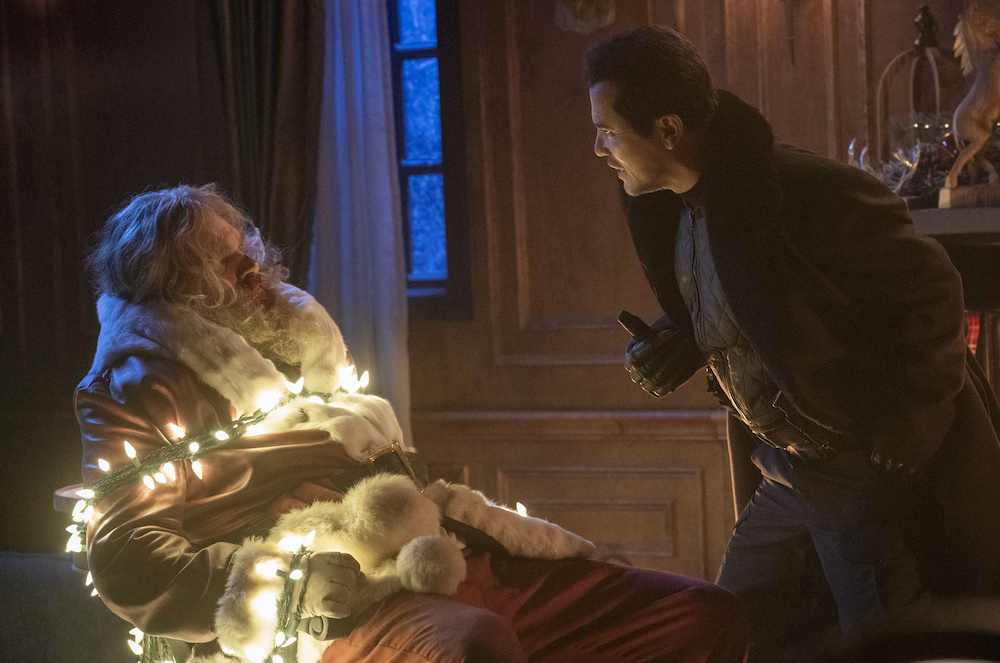 As Santa, David Harbour does a serviceable job. He’s not as overtly hostile as Mel Gibson or as misanthropic as Billy Bob Thornton in Bad Santa, but he’s got more personality than Tim Allen. One simply can’t imagine Allen’s Santa hefting a giant hammer and whaling on dozens of cretinous thugs. As the leader of the redshirts, John Leguizamo is disappointing, but maybe that’s because I’m making the inevitable comparison to Alan Rickman. Not only does he lack Rickman’s panache but he seems to be a couple of rings lower on the intelligence scale. Beverly D’Angelo is disappointingly unfunny as Gertrude Lightstone, the matriarch of the family targeted by Scrooge for his festivities (she has $500M in her “impregnable” vault). She could have taken lessons on acidic dialogue delivery from Maggie Smith in Downton Abbey. On the other hand, Cam Gigandet is deliciously over-the-top as the self-important actor Morgan Steel. Other cast members include Edi Patterson, Alex Hassell, Alexis Louder, and Mike Dopud.

It has been a long time since we have seen a really good Christmas movie – that’s one reason why TV stations are stuck on endless replay loops of A Christmas Story, National Lampoon’s Christmas Vacation, and various iterations of A Christmas Carol. Violent Night isn’t going to go down as a classic (although it may have cult classic potential) but, despite all the gore and violence and other R-rated material, it’s arguably less offensive than the kind of bilge proliferated by Netflix and Lifetime/Hallmark/etc. in the name of Holiday Cheer. There are certainly worse ways to spend a chilly December evening.