If I used words like “tiresome” and “lazy” to describe this pointless remake/reboot, it wouldn’t be sufficient to express the apathy I feel for Columbia Pictures’ sad attempt to exhume a franchise that was pronounced dead by the time the third installment arrived in theaters. Even with original participants Will Smith, Tommy Lee Jones, and Barry Sonnenfeld returning, Men in Black III was a disaster. Why would anyone believe that, seven years later with all those men gone, a fourth Men in Black could represent an improvement? The first Men in Black succeeded in part because of the concept and in part because of the chemistry. The second one got by largely on the likability of Smith and Jones and their capacity for oil-vinegar buddy shenanigans. The third one proved that the saga had run its course. Men in Black International is more than just an afterthought; it’s an unfortunate afterthought. Popular interest has long since evaporated and providing a new paint coat (courtesy of stars Chris Hemsworth and Tessa Thompson) can’t change that foundational fact. 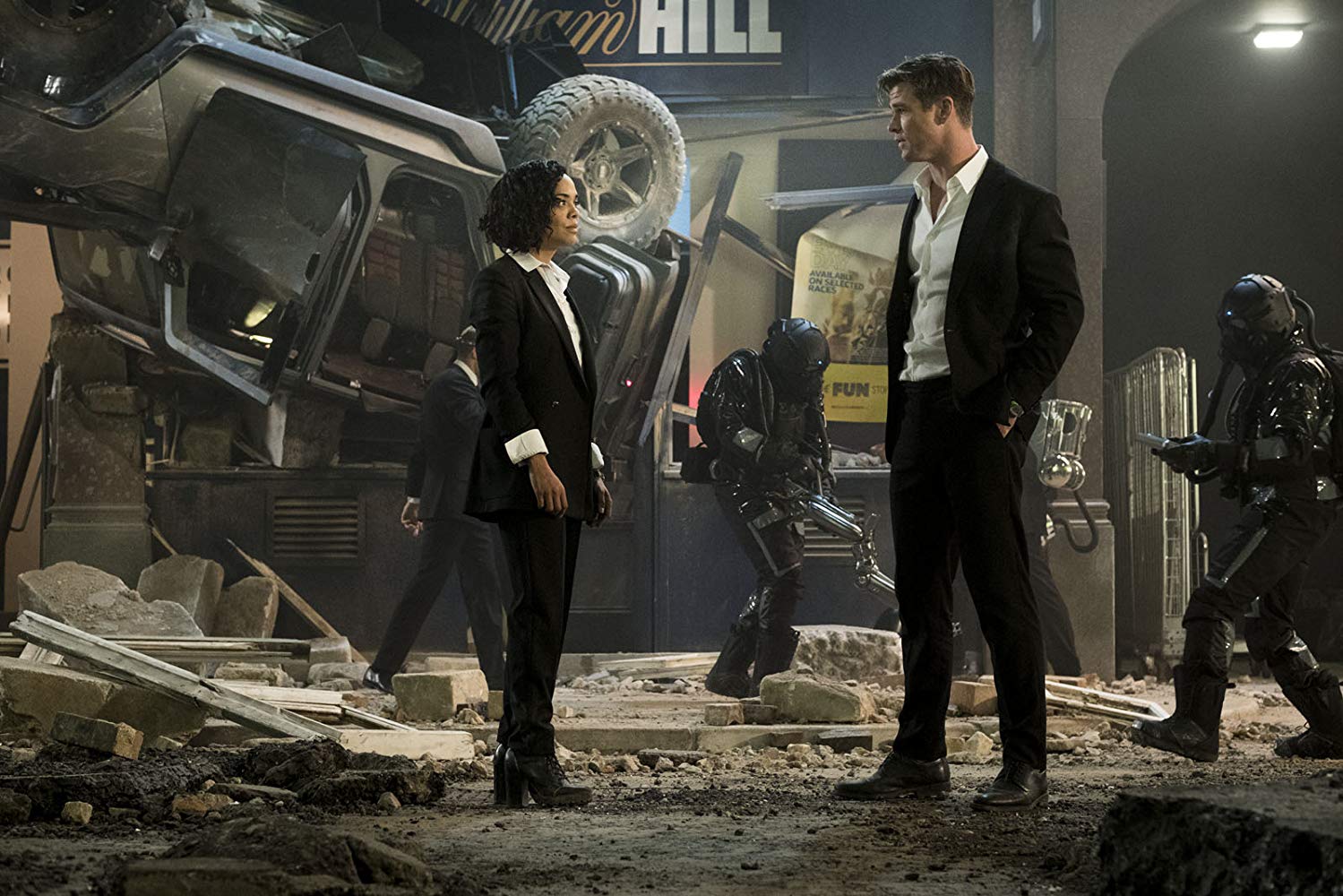 Although Men in Black International technically transpires in the same universe as its predecessors, the only returning cast member is Emma Thompson. Those holding out hope for a Will Smith cameo can give up (unless you count a likeness of him in a painting). With J and K nowhere to be found, replacements are needed. In this case, it’s H (Hemsworth) and M (Thompson). They work out of the European office, which is presided over by High T (Liam Neeson) and his bureaucratic flunky C (Rafe Spall). The needlessly convoluted plot can be boiled down to MIB’s attempts to stop an invasion/infiltration by The Hive. To do this, they have at their disposal an ultimate weapon but their efforts are hampered by the influence of a mole within the agency. It’s all pretty standard stuff, presented with minimal flair and little more than shallow surface humor. The movie fails at science fiction, comedy, and action. Such a trifecta might be considered impressive if you don’t have to sit through it.

Producers continue to mistakenly believe that Chris Hemsworth can “open” a film. The actor, who is photogenic, amiable, and talented, has proven himself as Thor but, aside from 2009’s Star Trek (in which he played a minor role), none of his films have made much of a box office dent. He’s a piece, not the whole puzzle. Those expecting his chemistry with Tessa Thompson to carry over from Thor: Ragnarok will be disappointed. While wearing black suits, the two don’t click, making one wonder how much of the blame should be placed on the shoulders of director-for-hire F. Gary Gray (a talented filmmaker who was hopefully well-paid for his work here). 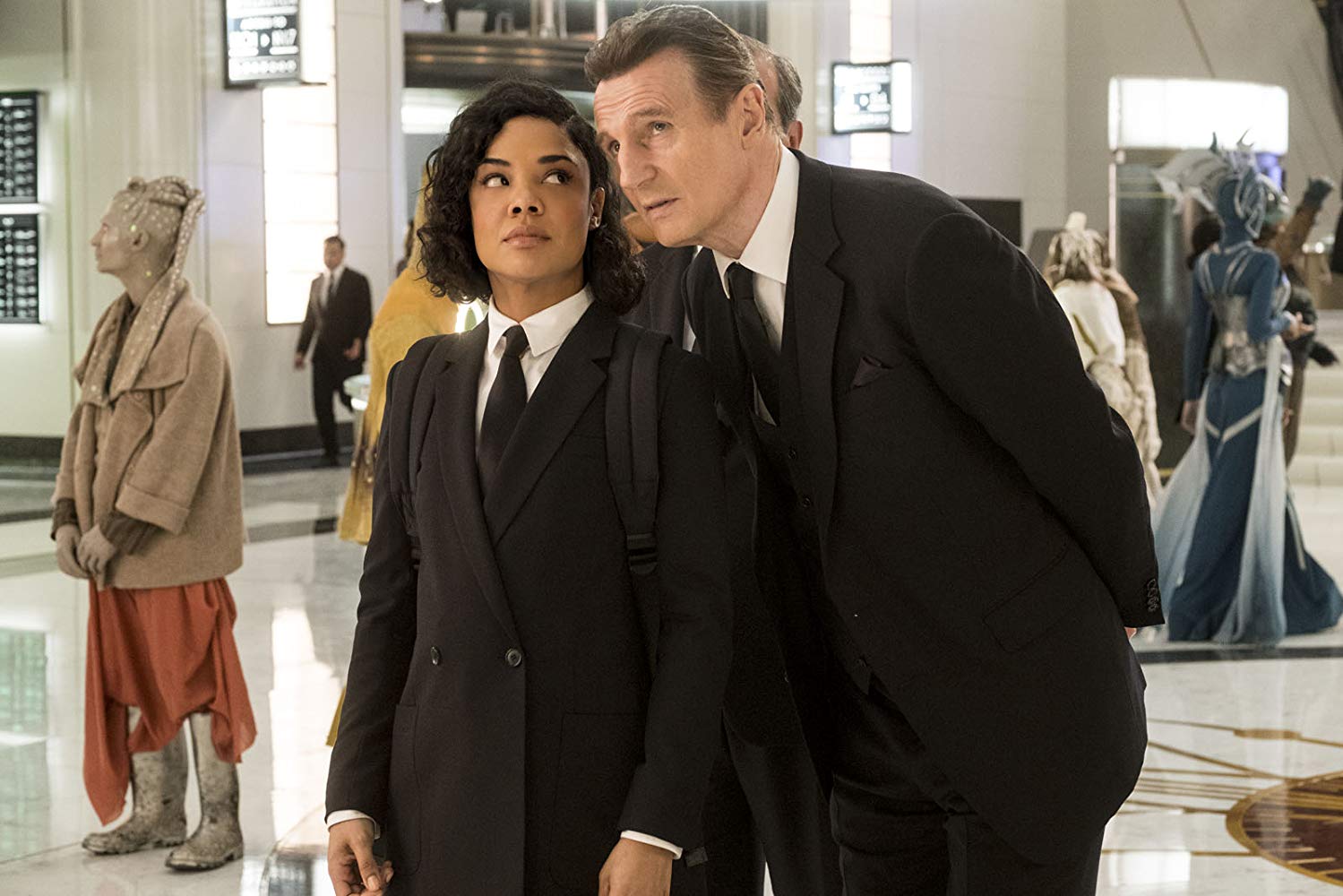 One can assume that a lion’s share of Men in Black’s budget went to paying Hemsworth, the Thompsons (Emma and Tessa), and Neeson, because not much seems to have been left over for the special effects. For the most part, they look sloppy and cut-rate. The lone exception is the thumb-sized Pawny (voice provided by Kumail Nanjiani), who attaches himself to M as her sidekick. The “endgame” Big Bad Alien is surprisingly cheesy and unimpressive.

When it comes to new installments in aging franchises, it’s often a crapshoot whether audiences will care enough to create a box office splash. With Men in Black International, there’s never been any mystery. It has been 17 years since Men in Black was a hot property and the intervening gap has done nothing to revive interest in it. Whoever spearheaded this halfhearted resurrection should be fitted with a golden parachute. For those who remember the Men in Black movies fondly, stick with your memories. Seeing this latest installment is more likely to degrade than enhance them.