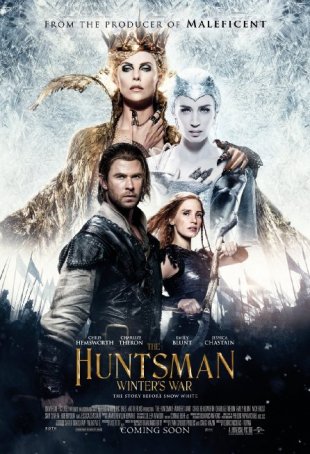 When Snow White and the Huntsman was released four years ago, it successfully transformed one of movie-dom’s beloved fairy tales (known primarily through the Disney animated classic) into a fantasy adventure. The Huntsman: Winter’s War, a part-prequel/part-sequel, ventures deeper into Lord of the Rings/Harry Potter territory without considering one basic rule of epic fantasy: length is a prerequisite to properly tell a story of this sort. Character arcs and plot points need to unfold over the course of hours, not minutes.  There’s a reason Peter Jackson’s adaptation of J.R.R. Tolkien’s trilogy spanned nine hours and it took eight films to bring J.K. Rowling’s vision to the screen. By cramming far too much material into 114 minutes, The Huntsman: Winter’s War feels rushed and incomplete. It doesn’t help that the screenplay is at times awful, forcing accomplished actors to recite excruciatingly bad dialogue while maintaining a straight face.

To be fair, it’s not all bad. Many elements of an effective fantasy adventure are in place, although they’re hampered by questionable execution. Individual scenes are effectively choreographed but the need to rush robs them of their capacity to thrill and excite. There are also some odd casting choices. Due to the decision not to bring back Kristin Stewart, Snow White doesn’t appear (except in a brief cameo where her face isn’t shown). And only one dwarf, Nion (Nick Frost), joins this movie’s quest. Based on his antics, he’s either “Dopey” or “Grumpy.” The first third of The Huntsman: Winter’s War transpires prior to the 2012 movie and provides background about how The Huntsman (Chris Hemsworth) became The Huntsman and how Queen Revenna (Charlize Theron) stole the throne and turned her loving, mild-mannered sister, Freya (Emily Blunt), into the Ice Queen of the North. We’re also introduced to The Huntsman’s wife, Sara (Jessica Chastain), who, at least according to Snow White and the Huntsman, was dead by the time that film took place. About 40 minutes into The Huntsman: Winter’s War, events jump ahead seven years and we’re into the sequel portion of the narrative. The magic mirror has been stolen and The Huntsman must retrieve it before it falls into Freya’s hands. Joining him on this quest are a quartet of dwarves, including the aforementioned Nion, and the back-from-the-dead (sort-of) Sara. The Huntsman’s objectives are: (1) retrieve the mirror, (2) defeat Freya before she becomes all-powerful and grinds Snow White’s kingdom underfoot, and (3) reawaken the spark of “true love” in Sara’s heart. 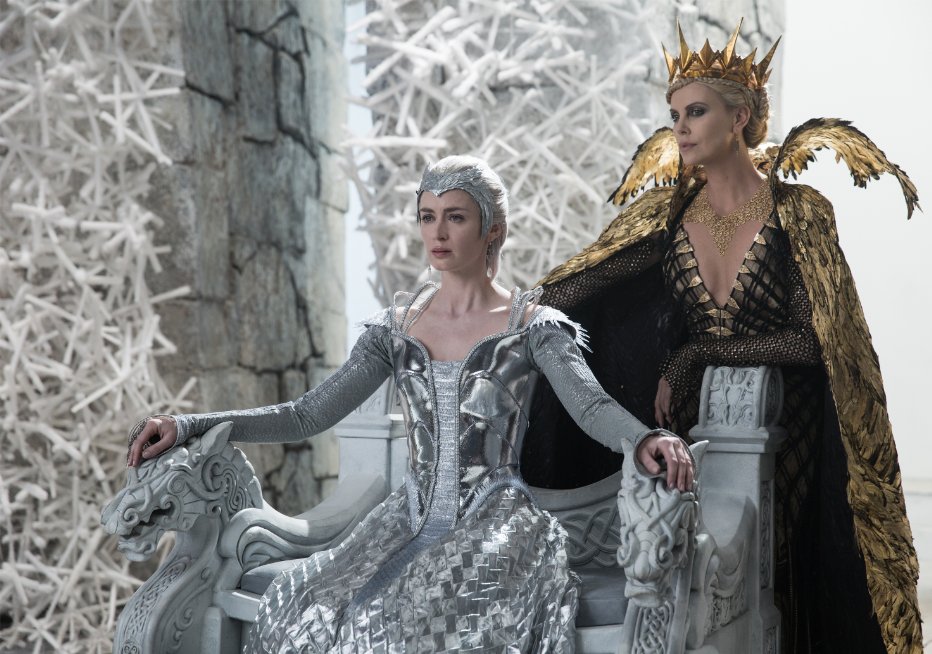 The female component of the cast is nothing if not accomplished.  Among them, Charlize Theron, Emily Blunt, and Jessica Chastain have accumulated four Oscar nominations, twelve Golden Globe nominations, and four BAFTA nominations (winning quite a few along the way). The Huntsman: Winter’s War isn’t going to increase the number. Theron’s over-the-top approach to Ravenna matches her performance from Snow White and the Huntsman. Emily Blunt is more restrained and succeeds, at least to a degree, in making Freya a quasi-tragic figure. Jessica Chastain manages not to appear bored. Chris Hemsworth is as invested as he needs to be for a stopgap between Thor movies.

The production design appears to have been influenced more by Maleficent than The Lord of the Rings. The arguing dwarves are on hand to provide the obligatory “comedic” moments that are supposed to lighten the apocalyptic implications of Freya’s plans. That might work if their banter was less inane and more genuinely humorous. As it is, they are irritating encumbrances whose superfluous nature becomes apparent with the approach of the climax.

By incorporating indirect references to Frozen and making “true love” an important theme, The Huntsman: Winter’s War hopes to win the hearts of younger female viewers. It’s a desperate ploy and the awkwardness with which it pursues this aim compromises the film’s structure. It’s possible to show love in ways other than having characters talk incessantly about it. It would be unfair to argue that there was no room for a sequel to Snow White and the Huntsman. The problem with The Huntsman: Winter’s War isn’t a lack of ideas but an inability to fuse them into a compelling story that draws on the strengths of its predecessor rather than incorporating tropes into an unsatisfying mass of fantasy adventure mediocrity.