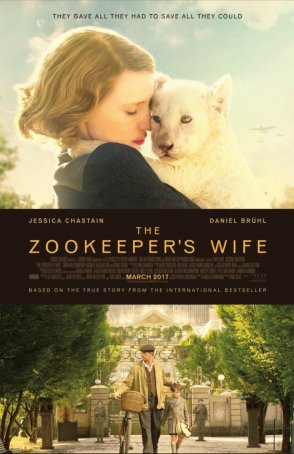 Not every movie about the Holocaust is expected to be on the same high level as Sophie’s Choice or Schindler’s List, but (especially when the source material is factual) more is expected than the familiar melodrama and faux tension delivered by Niki Caro’s The Zookeeper’s Wife. A partially fictionalized account of the experiences of Antonina and Jan Zabinski (Jessica Chastain and Johan Heldenberg), the husband-and-wife couple who ran the Warsaw Zoo during World War 2, the film tries to tug at the heart strings and uplift, but rarely succeeds at either. The problem isn’t the non-fiction book by Diane Ackerman around which the narrative has been constructed, but a series of “added” scenes and subplots that seem lifted from a bad B movie and have the unintended consequence of devaluing the story as a whole. 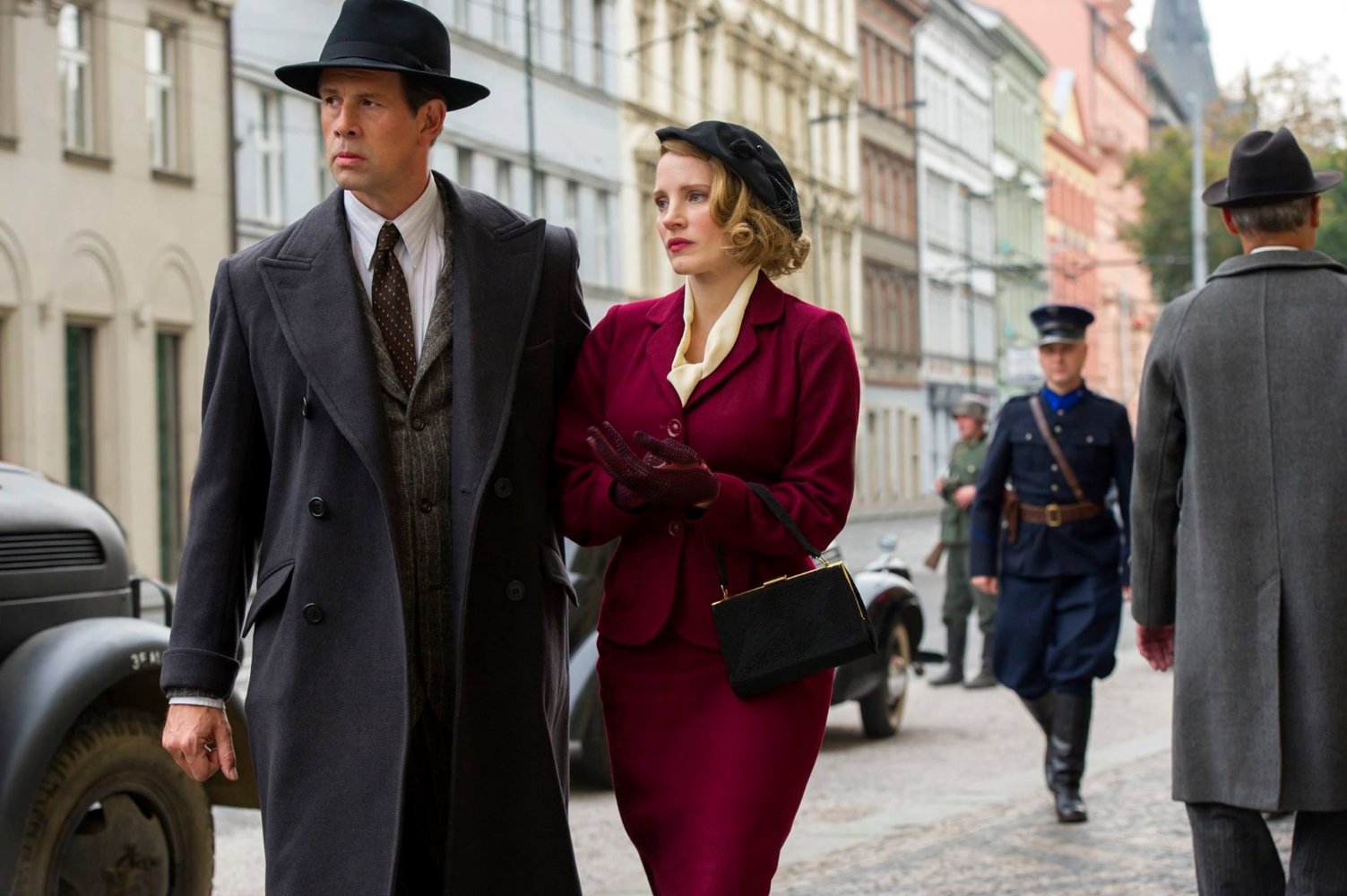 The Zabinskis’ story is worthy of a motion picture – just not this motion picture. The script falls prey to a laundry list of pitfalls. In trying to cram seven years’ worth of events (1939-1946) into two hours, the movie is never given an opportunity to pause to take its breath or properly develop the characters. Occasional lurches forward in time damage continuity (in one scene, Antonina is suddenly about to give birth while in the previous scene she wasn’t even pregnant) and some of the characters’ actions (such as Antonina’s bizarre visit to a Nazi official’s office) don’t make any sense. The need to have a strong villain results in one being created, Lutz Heck (Daniel Bruhl), who comes directly from Nazi central casting. And there are all sorts of clichés about what happens when Jewish refugees are being hidden in cellars and attics.

I can understand why American actress Jessica Chastain was chosen to play the title character, who was a Pole. There are times when the need to obtain financing requires that a “name” be attached to a project, even when the casting is dubious. For the most part, Chastain’s performance is strong, but her accent, whether accurate or not, makes half her dialogue indecipherable. Belgian actor Johan Heldenberg is excellent in the low-key role of Jan, although his screen time is sadly limited and his character remains half-developed. Daniel Bruhl gets to leer evilly and twirl his mustache as the over-the-top scenery-chewing Nasty Nazi Zoologist. (Heck was a real person but many of his actions and some of his characteristics were invented to serve the movie’s “dramatic purposes.”) 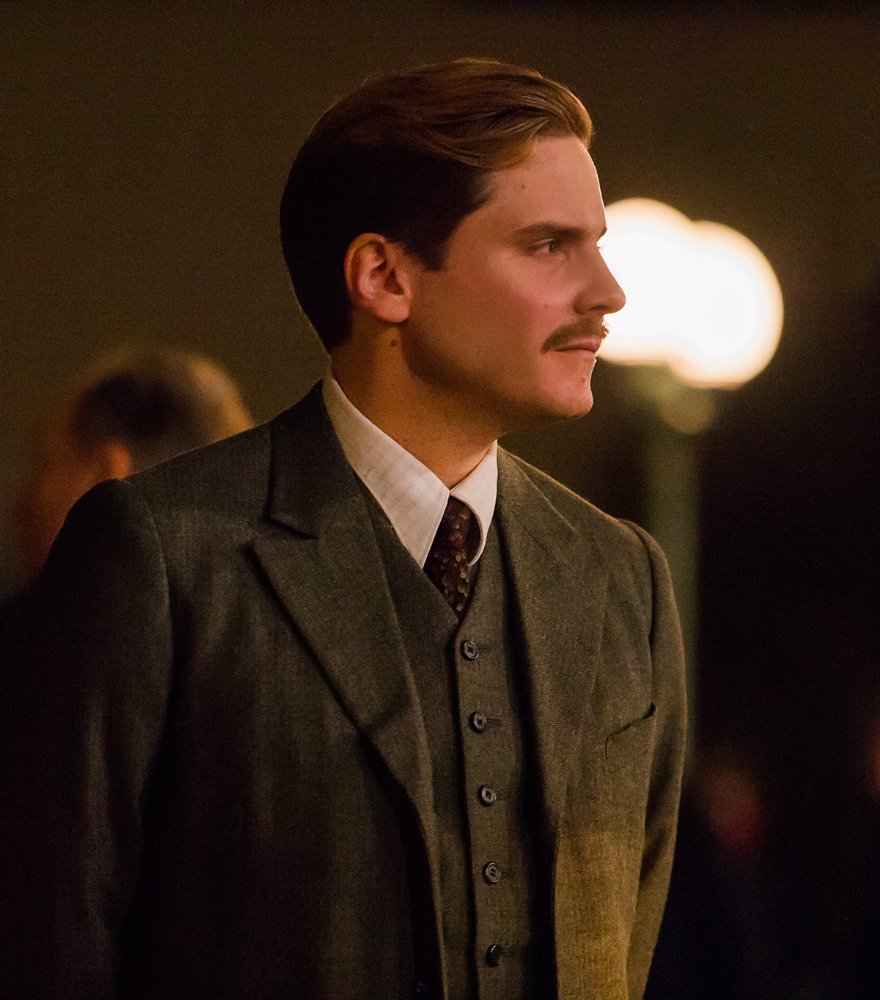 The movie opens prior to Hitler’s invasion of Poland, providing introductory scenes at the Warsaw Zoo to establish the characters and their relationships to each other and the animals. Then comes the Nazi offensive and occupation. These are the film’s strongest scenes as, in depicting the often-brutal fates of the animals, The Zookeeper’s Wife shows us things we haven’t seen before. Once the grounds have been secured, Heck comes into the picture. A scientist devoted to breeding pure lines, he decides to use the zoo as a laboratory to revive the extinct aurochs. Spending much time there allows him to cultivate a “friendship” with Antonina, for whom he has developed a sexual attraction. She plays along with him because, unbeknownst to the Nazis, she and Jan are sheltering a number of Jewish families in the zoo’s basement, providing an escape route for some of the captives of the Warsaw ghetto before they are shipped off to Auschwitz.

Although there are reasons why a movie like this solicits a PG-13 rating, the decision to water down the horrors of the Holocaust is misguided. Muting the mistreatment of the Jews in Nazi-occupied Poland may allow the possibility for younger viewers to see the film but it creates an impression that things may not have been as bad as they were.  None of the great Holocaust movies shrink from depicting harrowing and disturbing things but the most arresting image in The Zookeeper’s Wife is that of a wealthy woman posing for a picture outside the gate to the Ghetto.

Undoubtedly, The Zookeeper’s Wife was made with the best intentions and the acclaimed director, Niki Caro, is known for choosing socially conscious projects (Whale Rider, North Country). The injection of too many fictional elements into an inherently compelling story lies at the heart of this film’s problems, but they are compounded by a too-broad timeline and the neutering of elements deemed too disturbing for a portion of the intended audience. The Zookeeper’s Wife will not go down in the annals of history as one of the great Holocaust films. If it’s remembered at all, it will be seen as a missed opportunity to tell a powerful story.