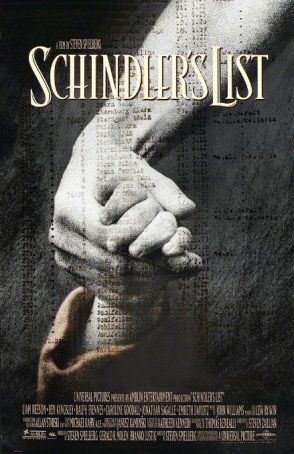 There have been numerous documentaries and dramatic productions focusing on the Holocaust, including a television mini-series which many consider to be the definitive work. As a result, in deciding to film Schindler's List, director Steven Spielberg (Jurassic Park) set an imposing task for himself. His vision needed to differ from that of the film makers who preceded him, yet the finished product had to remain faithful to the unforgettable images which represent the legacy of six million massacred Jews. Those who see this motion picture will witness Spielberg's success.

The film opens in September of 1939 in Krakow, Poland, with the Jewish community under increasing pressure from the Nazis. Into this tumult comes Oskar Schindler (Liam Neeson), a Nazi businessman interested in obtaining Jewish backing for a factory he wishes to build. He makes contact with Itzhak Stern (Ben Kingsley), an accountant, to arrange financial matters. For a while, there is no interest and nothing happens.

March 1941. The Krakow Jewish community has been forced to live in "the Ghetto", where money no longer has any meaning. Several elders agree to invest in Schindler's factory and the DEF (Deutsche Emailwarenfabrik) is born - a place where large quantities of pots are manufactured. To do the work, Schindler hires Jews (because they're cheaper than Poles), and the German army becomes his biggest customer.

March 1943. Germany's intentions towards the Jews are no longer a secret. The Ghetto is "liquidated", with the survivors being herded into the Plaszow Forced Labor Camp. Many are executed, and still others are shipped away by train, never to return. During this time, Schindler has managed to ingratiate himself with the local commander, Amon Goeth (Ralph Fiennes), a Nazi who kills Jews for sport. Using his relationship with Goeth, Schindler begins to secretly campaign to help the Jews, saving men, women, and children from certain death.

Spielberg elected to film this motion picture in black-and-white, and it's impossible to argue with his choice. Director of Photography Janusz Kaminski has made effective use of shadow and light, meticulously limiting the application of hue. The opening scene is in color, as is the closing sequence (which features the surviving "Schindler Jews", each accompanied by the actor who played their character, placing a stone on their savior's grave). There are also two instances when color is allowed to bleed into the blacks, whites, and grays. One little girl's jacket appears red so that she stands out from the masses, and a pair of candles burn with orange flames. When color is used, it makes a point and an impression.

Schindler's List gives us three major stories and a host of minor ones. First and foremost, it tells the tale of the Holocaust, presenting new images of old horrors. These are as ghastly and realistic as anything previously filmed, and Spielberg emphasizes the brutality of the situation by not pulling punches when it comes to gore. The blood, inky rather than crimson in stark black-and-white, fountains when men and women are shot in the head or through the neck.

The second story is that of Oskar Schindler, the Nazi businessman who saved 1200 Jews from death. Schindler starts out as a self-centered manufacturer, concerned only about making money. He hires Jews because they're cheap, not because he likes them. But his perspective changes, and he risks losing everything to save as many lives as he can. His eventual lament that he couldn't save more is heartbreaking.

The third story belongs to Amon Goeth, the Nazi commander of Krakow, a man who teeters on the brink of madness. Despite his intense hatred for Jews, he is inexplicably attracted to his Jewish housekeeper, Helen Hirsch (Embeth Davidtz). Disgusted by his feelings, he lashes out at her with a display of violence that is almost Scorsese-like in its blunt presentation. As written, Goeth could easily have become a conscienceless monster, but Spielberg works carefully to show unexpected depth and complexity to his character.

Often, the experiences of the minor characters provide the most lasting images. Helen's story is memorable, as is the plight of young Danka Dresner and her mother as they strive to avoid death while staying together. There's a Jewish couple that marries in the Plaszow camp, even though their chances of survival are dim, and a Rabbi who survives a close encounter with a Nazi gun.

Of course the Holocaust images are grim, but scenes of mass graves and exhumed bodies are not unique to Schindler's List. While it's impossible to deny their power, potentially more distubing are the instances of callous, individual murder. Spielberg doesn't spare his audience when it comes to sudden violence or the dehumanizing factors involved in such events. After all, Jews were viewed as "vermin." Schindler's List is replete with moments like this.

The acting is uniformly excellent. Liam Neeson's Schindler is shown in all his complexity, and his transformation is played with studied control. This is no sudden reversal of philosophy, but a matter of conscience that slowly dawns on the man. With a keen sense of Schindler's character, Neeson depicts the metamorphosis from self-centered businessman to driven messiah.

Ben Kingsley, whose Gandhi transfixed audiences years ago, has the movie's most understated role -- one that he acts with simple sincerity. Equally as impressive is Embeth Davidtz, who snares the viewer's attention during her limited screen time as Helen Hirsch, the object of Amon Goeth's twisted affection. Speaking of Goeth, Ralph Fiennes stuns with his intricate, savage portrayal of the Nazi commander, a man fascinated by power and murder. Fiennes' Goeth has the rare ability to both mesmerize and repulse, and this is a performance that will long be remembered.

Despite the grisly subject matter, this movie is essentially about uncovering a kernel of hope and dignity in the midst of a monstrous tragedy. The story of Oskar Schindler's sacrifices for the Jews sets this apart from other Holocaust dramas. Uncompromising in its portrayal of good, evil, and all the shades in between, Schindler's List offers a clear view of human nature laid bare: hatred, greed, lust, envy, anger, and, most important of all, empathy and love. Because this film touches us so deeply, the catharsis has a power that few -- if any -- other moments in film history can match. And that's what establishes this as a transcendent motion picture experience.