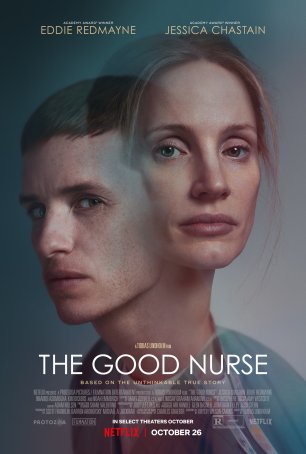 The Good Nurse is what it appears to be: yet another of those true crime movies that Netflix churns out with regularity. The only difference between this and another of the limitless similar films in the streaming giant’s library is that this one stars two major Hollywood players: Oscar-winners Jessica Chastain and Eddie Redmayne, neither of whom sleepwalks through the project. Both actors give the roles their full attention and that, at least, is enough to keep the viewer engaged when the script fails – something that happens with disappointing frequency.

The film, the English-language debut of Danish director Tobias Lindholm, chronicles events as told in Charles Graeber’s 2014 rigorously researched book, The Good Nurse: A True Story of Medicine, Madness, and Murder. Charlie Cullen (Eddie Redmayne) is a talented but shy nurse who moves from hospital to hospital for no obvious reason. He winds up at a nondescript New Jersey location working alongside Amy Loughren (Jessica Chastain), a single mother suffering from a cardiac condition. Although the stress of the job could kill her, she needs the health insurance so she soldiers on. Charlie, recognizing her situation, befriends her and offers his help whenever she needs it. At first, she welcomes Charlie’s offer but a meeting with an old friend makes her aware of something shocking in Charlie’s past. After two of her patients being cared for by Charlie inexplicably die, Amy approaches two police detectives, Tim Braun (Noah Emmerich) and Danny Baldwin (Nnamdi Asomugha), who are already investigating, with her belief that Charlie may be a serial killer. 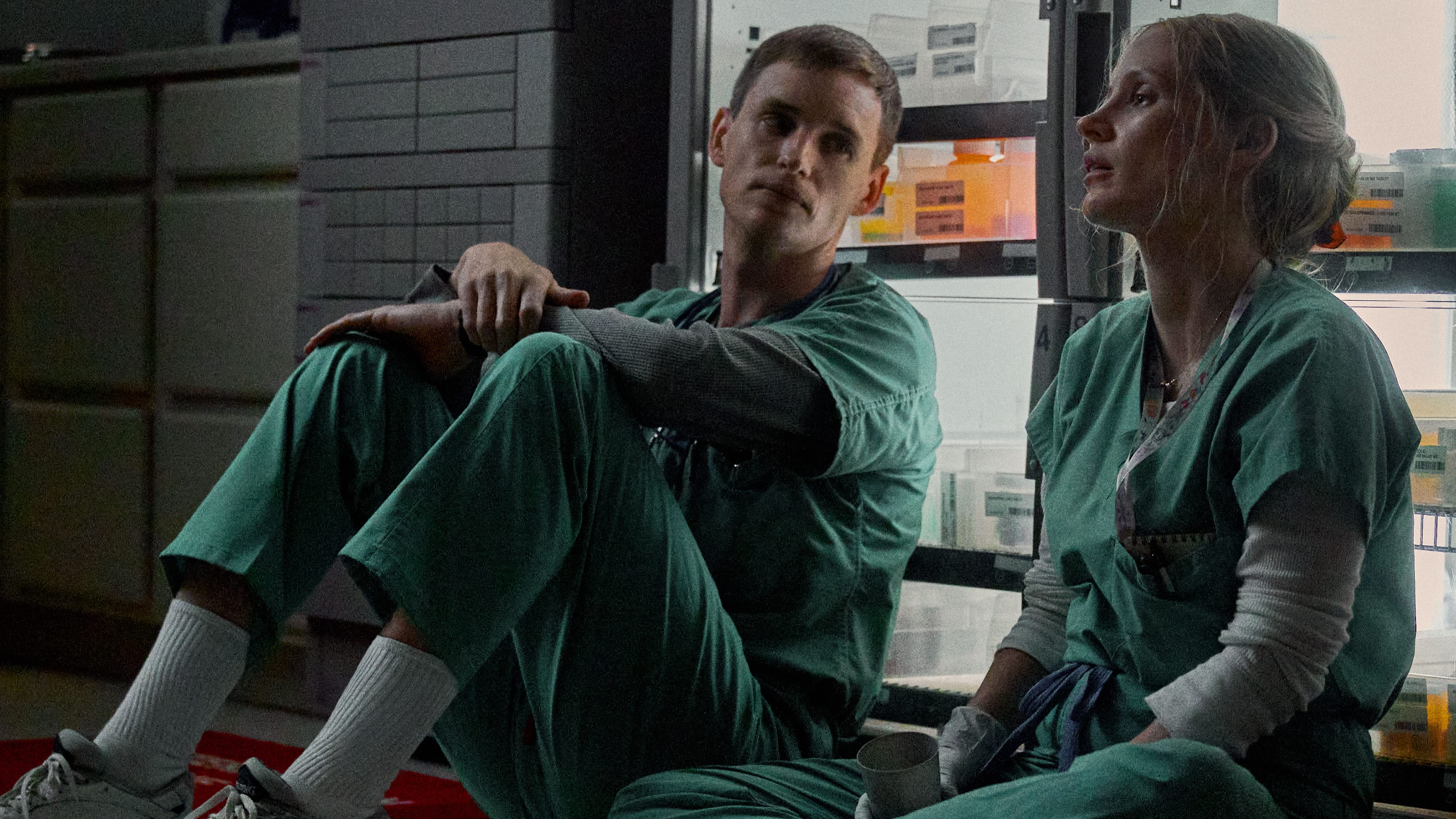 As a throw-away means to kill a couple of hours, The Good Nurse is passable. It doesn’t do much that’s good but it accomplishes what one expects from this sort of movie: dramatizes the various slip-ups that lead to a perpetrator’s downfall. Character development, however, doesn’t seem to have been of great import to screenwriter Krysty Wilson-Cairns. Amy and Charlie are defined more by the actors playing them than by anything in the script. We see a couple of scenes with Amy’s kids and recognize that she’s operating under extreme economic pressure but the film has neither the time nor the patience to delve into who Amy is outside of her career. The situation is even murkier with Charlie who is mostly a blank slate. Chastain and Redmayne’s performances fill in some of the holes but not enough to dispel the feeling that these aren’t fully realized people. That limits the already sputtering tension, making this a rather unthrilling thriller. It also creates distance between the viewer and the characters. When The Good Nurse ended, I was strangely unmoved. Reading a Wikipedia article would have been equally as enlightening. 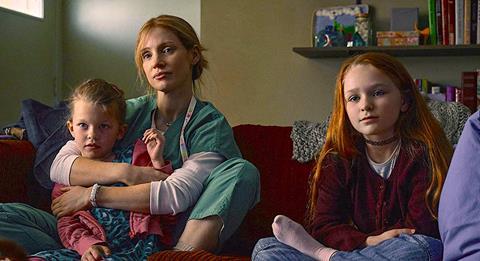 Some of the more interesting aspects of the case are raised in a muddled fashion then dropped. Chief among these is the financial pressure that causes hospitals to shuffle bad actors around rather than bringing the police onboard. Lawyers and stockholders make the decisions and, when there’s an unexplained death or two, it’s easier to move a suspected nurse elsewhere than court the scandal that would accompany a public investigation. It’s reminiscent of how the Catholic Church would move pedophile priests to different posts rather than defrocking them and offering them up to law enforcement.  Although this element of The Good Nurse could have provided fodder for a juicier drama, it is addressed as a side-issue that never gains much traction. The movie isn’t concerned with how Charlie was able to operate for as long as he did; it wants to focus on his shifting relationship with Amy.

With its Toronto Film Festival debut leading to a late-year run on Netflix, The Good Nurse arrives accompanied by Oscar hopes. I’m not sure why that’s the case since, with the exception of strong performances across-the-board (especially by the two leads), there’s nothing here to warrant more than passing interest. This seems to be yet another case of Netflix putting up the money to attract top talent but, having achieved that aim, not really knowing what to do with them. In a streaming series spread out over four or six hours, this might have offered compelling content (and certainly would have seemed less rushed) but, in its current format, it’s more frustrating than satisfying and the facile ending doesn’t hit the right spot.