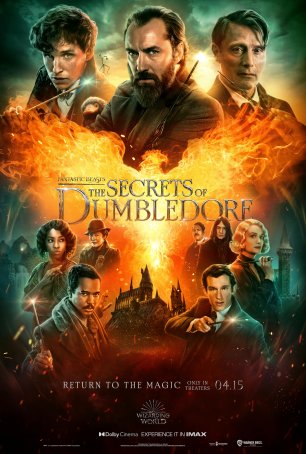 Is this the end of the cinematic Wizarding World? Based on both the text of Fantastic Beasts: The Secrets of Dumbledore and various extra-production cues, the answer may be “yes.” The eleventh film to transpire in the world created by J.K. Rowling has a tired, obligatory feel. An unnecessary, joyless affair, it plods along offering “canonical” tidbits to fans but very little to casual viewers. If you’re a die-hard, you may enjoy how Rowling and co-screenwriter Steve Kloves fill out the background of Albus Dumbledore (Jude Law). But there’s little beyond some busy action scenes to hold the attention of anyone who doesn’t care about Dumbledore’s sexuality or the intricacies of how the wizards choose their leader. (It has something to do with a magical deer – err, make that a “Qilin” – bowing down to the worthy candidate. I was reminded of this line from Monty Python and the Holy Grail: “Strange women lying in ponds distributing swords is no basis for a system of government.” But I digress…)

The Harry Potter movie series was starting to get long in the tooth by the time bifurcated The Deathly Hallows entered theaters in 2010-11. Unwilling to allow their cash cow to die just because the story was done, Warner Brothers struck a deal with Rowling to produce a prequel series. Initially intended to be a trilogy, it was expanded to a possible five film arc after the first installment, 2016’s Fantastic Beasts and Where to Find Them, proved to be financially successful. By 2018, however, when Fantastic Beasts: The Crimes of Grindelwald was released, there was box office evidence of franchise fatigue. It’s hard to imagine The Secrets of Dumbledore reversing the trend. No work has (yet) been done on a possible fourth segment and, at least in terms of the storyline, this production offers what could pass for a conclusion (many subplots are tied up) while not closing the door completely on the possibility of additional films. The story offers a surfeit of political complexities and machinations but little in the way of narrative depth. It’s all about how primary villain Gellert Grindelwald (Madds Mikkelsen) seeks to become the leader of the wizards by subverting their worldwide election. (Note: this movie was written before the 2020 U.S. election; it was in production when Donald Trump lost his bid for a second consecutive term. It is therefore not a direct reaction to those events although it may seem to be.) His long-term goal is to start a war with the Muggles that the latter group couldn’t hope to win. Standing against him is a ragtag team assembled by his once-lover/now-enemy, Albus Dumbledore. Dumbledore’s allies include “magizoologist” Newt Scamander (Eddie Redmayne) and his brother Theseus (Callum Turner); Hogwarts professor Lally Hicks (Jessica Williams); human Jacob Kowalski (Dan Fogler); French wizard Yusuf Kama (William Nadylam); Albus’ brother, Aberforth (Richard Coyle); and Newt’s assistant, Bundy Broadacre (Victoria Yeates). Also making return appearances are Jacob’s love interest, Queenie (Alison Sudol), who is now working with Grindelwald, and Newt’s soulmate Tina (Katherine Waterston), whose role is reduced to a late-in-the-film cameo.

Rather than simply pursue the main storyline (which inevitably results in a dramatic confrontation), The Secrets of Dumbledore pads things out with unnecessary detours like the Theseus’ imprisonment and subsequent rescue. These narratively pointless, action-heavy sequences take what might have been a brisk 100-minute affair and drag it out to 142 minutes, killing momentum and at times making it a snooze-inducing experience. When it’s over, the film can be said to accomplish a few things, not the least of which is ending Grindelwald’s latest gambit for power, but the resolution is anticlimactic and the denouement is not as satisfying as it should be.

The biggest misstep is the decision to sideline Katherine Waterston’s Tina for nearly the entirety of the proceedings. Her chemistry with Eddie Redmayne and the fun, flirty relationship they developed during the course of the first two movies was one of the best things the earlier Fantastic Beasts had to offer. Its absence is keenly felt. Although the series began with the idea of Newt being the lead character, he continues his slide into irrelevance. As the title suggests, the younger version of Harry Potter’s mentor has taken center stage, reducing Newt to a secondary player. And, without Tina, he is even more diminished than in The Crimes of Grindelwald. Madds Mikkelsen makes for an improvement over Johnny Depp but remains inferior to the best Grindelwald, the first film’s Colin Farrell. The opening scene, which puts Mikkelsen face-to-face with Jude Law in a stew of regrets and longing, is the best moment in the 2+ hour motion picture.

There’s probably still a contingent of Harry Potter die-hards who will enjoy everything that The Secrets of Dumbledore has to offer and, at least in terms of stylistic elements and technical aspects, it remains consistent with the previous movies (director David Yates has helmed every Wizarding World movie since 2007’s Harry Potter and The Order of the Phoenix). But there’s nothing in this third Fantastic Beasts installment that will grow the audience. In fact, the plodding pacing offers little to excite anyone outside the dwindling core fandom. It’s time to bid farewell to Dumbledore and his associates, students, proteges, and enemies.