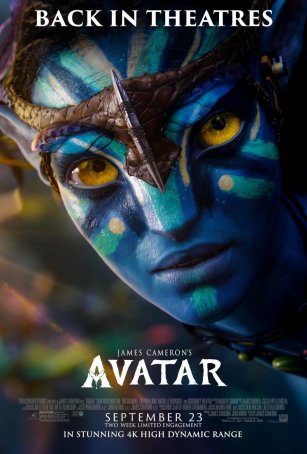 The majority of this review is taken from what I wrote in 2009. I have tweaked and edited it to update it for 2022. Following the main review are a few new comments written following my re-watching of the film on September 23, 2022.

Avatar has been described as a "game-changer," and perhaps it was. I'll leave that for future historians to determine. At the time of its original release, it was among the most anticipated openings of the decade. Expectations can be a double-edged sword; ask George Lucas. But when a filmmaker meets or exceeds them, the results are tremendous, and that's the case with Avatar. When it first opened in theaters in 2009, James Cameron had a lot riding on this film, his long-delayed follow-up to Titanic (which came out a dozen years prior). Under "normal" circumstances, at stake would have been only Cameron's reputation and future autonomy with astronomical budgets. But Cameron hitched his wagon to 3D and if every filmmaker could have done with 3D what Cameron achieved, I would have gladly worn the uncomfortable glasses to every screening.

Avatar is entertainment of the highest order. I ranked it as the best movie of 2009. In 3D, it's immersive (that's the buzzword everyone uses for the 3D experience), but the traditional film elements – story, character, editing, theme, emotional resonance, etc. – are presented with sufficient expertise to make even the 2D version an engrossing 2 1/2-hour experience. Despite expending an extraordinary amount of time, money, and effort perfecting the 3D elements, Cameron never lost sight of what's important. His narrative could almost be considered a science fiction version of Dances with Wolves (by way of Surrogates), and it works for many of the reasons Dances worked. Cameron also borrows from his own catalog. The space/military culture is reminiscent of that in Aliens and the cross-cultural romance recalls Titanic. Avatar doesn't have Leonardo DiCaprio but its love story is in some ways more potent than the one told in Titanic because the stakes are higher. From a purely visual perspective, Cameron gives us one of the most amazing presentations ever of an alien world and builds toward an epic clash. 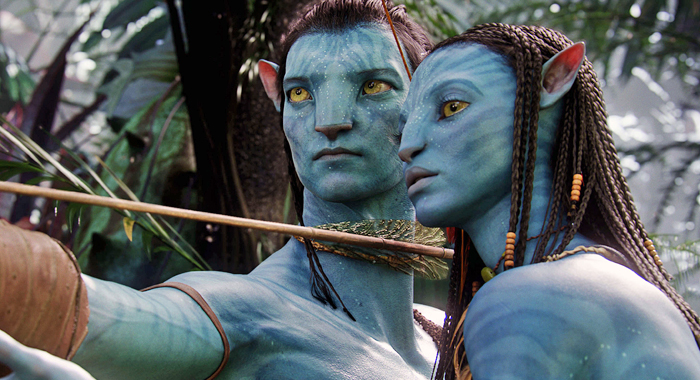 Avatar takes us to the planet Pandora in the year 2154. Pandora is a jungle world where Earthmen have arrived with the intention of performing some strip-mining. Although corporations run the show, the military, led by Colonel Miles Quaritch (Stephen Lang), is on hand to provide protection and lend support. The humans' engagements with the indigenous humanoid population, the 10-foot high, blue-skinned Na'vi, have been contentious, bordering on hostile. For a while, Dr. Grace Augustine (Sigourney Weaver) had some success interacting with the natives by using "avatars"(synthetic Na'vi remotely controlled by humans) to provide education and technological advancement, but progress slowed and Grace was closed out of Na'vi society. Now, she and her group of avatars are trying to find a way back in.

That portal comes in the unlikely person of Jake Sully (Sam Worthington), a paraplegic ex-marine. Sam's journey to Pandora is a fluke. His twin brother, who had trained for years to inhabit an avatar and whose genetic identity was imprinted upon one, died unexpectedly and Jake was the only one who could take his place. He is caught between two masters: Colonel Quartich, who wants the soldier to form a bond with the Na'vi so he can pass back valuable tactical information, and Grace, who wants to rebuild the lines of communication. A series of events in the jungle separate Jake from the other avatars and place him in mortal danger. His life is saved by Neytiri (Zoe Saldana), who distrusts him but believes he is touched by the Na'vi god. She takes him to the "home tree" where he must not only plead for his life but for the opportunity to learn their ways. Neytiri becomes his mentor and he soon finds himself more in sympathy with his blue-skinned "brothers" than with Colonel Quartich, who is planning a massive operation to relocate the Na'vi away from a rich load of ore. 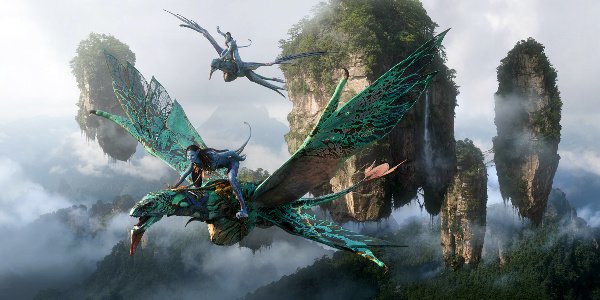 Most 3D films use the technology as a gimmick – a means to prompt audience members to "ooh" and "aah." That's not the case here. Cameron's film is immersive because the 3D was ingrained in its cinematic DNA. He has compensated for the pervasive dimness caused by polarized lenses by increasing the brightness (the images look too bright when viewed without the glasses). He has avoided 3D "tricks" (throwing things at the audience) that might take the viewer out of the experience. Avatar's visuals are so sumptuous that, perhaps as little as ten minutes into the movie, I forgot I was wearing the glasses.

Cameron understands how the pieces of the puzzle need to come together to form a complete motion picture, and he assembles them as only a master can. The story, although simple, resonates deeply in an era when it has become evident that humanity is a less-than-perfect steward of the planet on which we live. As with Dances with Wolves and The Last Samurai, this is about a military man who finds himself transformed by the culture he adopts and ends up opposing his own people in an impossible battle. Jake's love affair with Neytiri confirms Cameron as being a romantic at heart. The Pandora menagerie is like something out of a dungeon master's wet dream: dinosaur-like creatures that are impervious to bullets, vicious carnivores that make T-Rexes look tame, scavengers that roam and attack in packs, dragon-like flying creatures that populate the skies, and vegetation that's just as alive as the animals. The blue-skinned Na'vi, clearly modeled after the Native Americans, are among the most "ordinary" of Pandora's inhabitants. 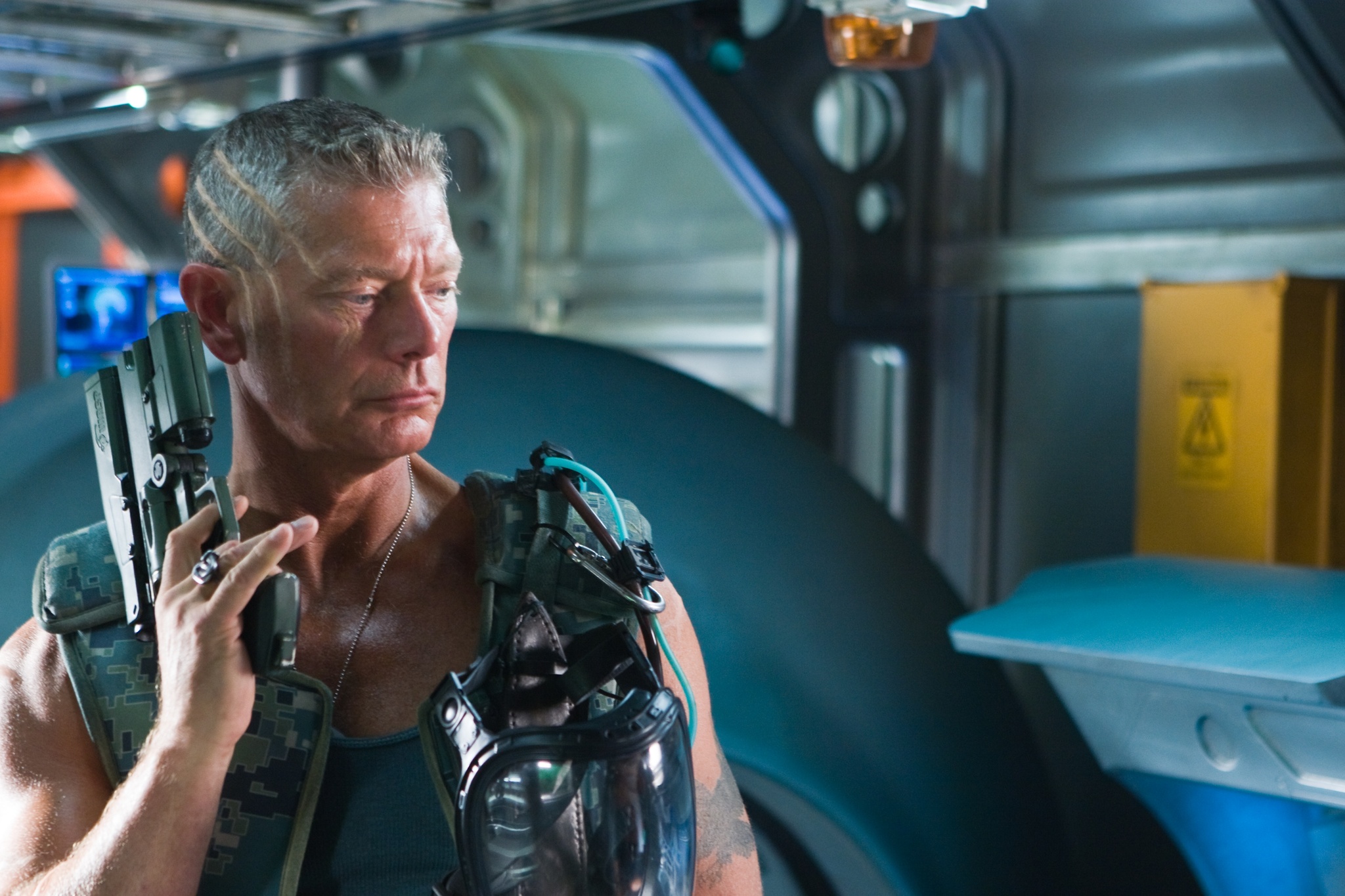 All movies like this must have a villain; Avatar provides two. The first is the bureaucrat, Parker Selfridge (Giovanni Ribisi), who is devoted to the profit margin above all else. Any resemblance to the Paul Reiser character in Aliens is intentional. Maybe Cameron was thinking of the studio bosses controlling his budget when he created Selfridge. Then there's Colonel Quartich, who is brought brilliantly to life by the scene-stealing performance of Stephen Lang. This man's a real sonofabitch, but it's impossible not to admire him on one level. Like Robert Duvall in Apocalypse Now, he loves the smell of napalm in the morning… at noon, and during the night. Quartich is never CGI animated but he always seems bigger than life. If there's a human star of Avatar, it's Lang.

Lang may have the showiest role but he's not the only actor to do a creditable job. Sam Worthington and Sigourney Weaver are both solid, even though a good portion of their characters' screen time is animated. Zoe Saldana is even more challenged, since she never appears "in the flesh." Like Andy Serkis' Gollum, she is entirely CGI-rendered, but she accomplished her own motion capture work and provided the voice. Michelle Rodriquez, like Stephen Lang, is never required to become blue. Her role is secondary but unambiguously heroic. Weaver's presence affirms that, as bad as Cameron's reputation as a taskmaster may be, there are actors who appreciate his perfectionist approach. (Others in this group include Michael Biehn, Arnold Schwarzenegger, the late Bill Paxton, Linda Hamilton, and Kate Winslet.) 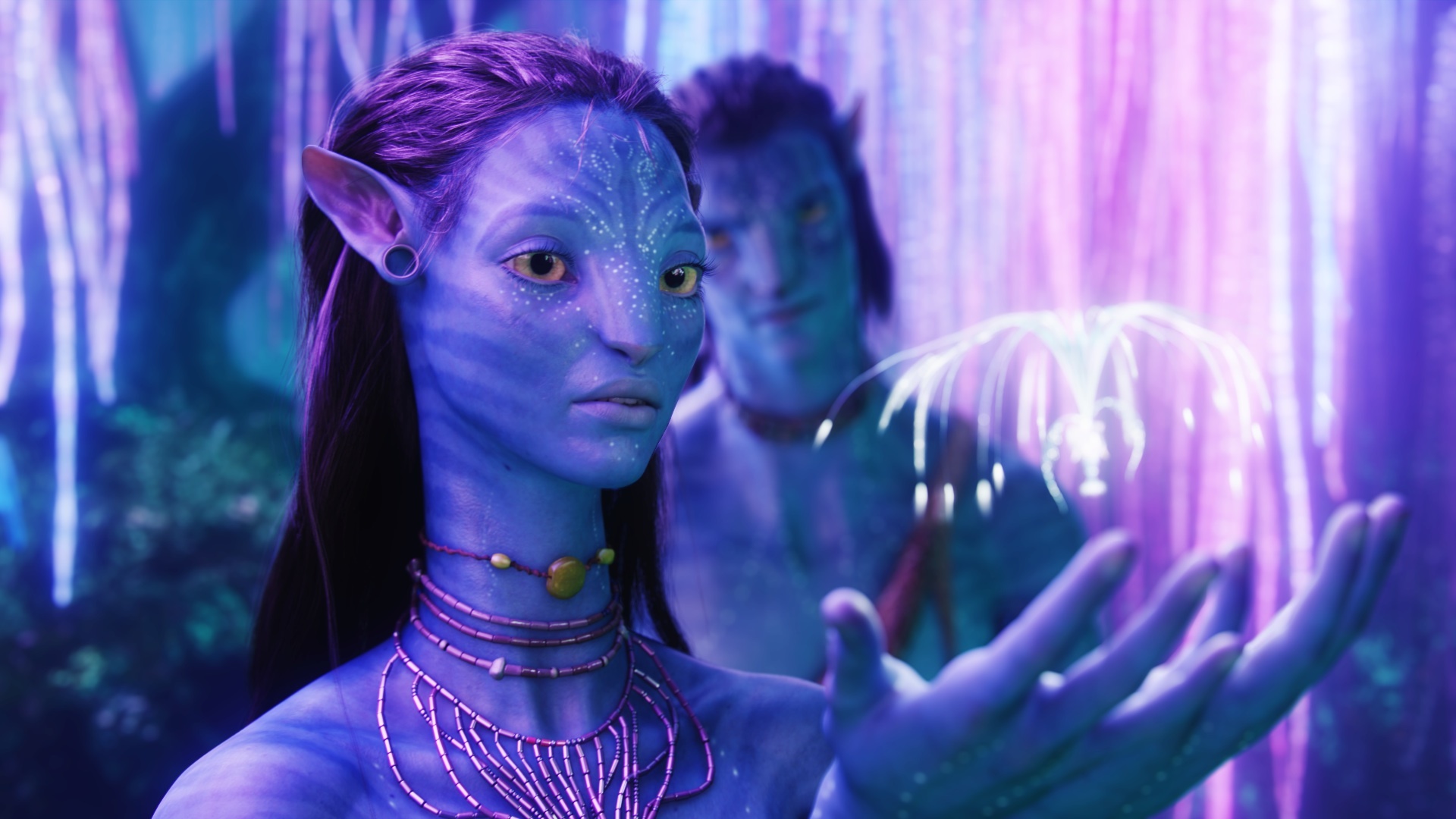 Any criticisms I have of Avatar are in the nature of nit-picks, but I will mention them for completeness' sake. At worst, they are ephemeral distractions, easily dismissed. At best, they will not be noticed at all. Sam Worthington's performance is solid but his American accent is not. As was evident in Terminator: Salvation, Worthington's "American" sometimes comes with an Aussie twang. Visually, Avatar is almost flawless, but there are some instances when the camera moves so fast that the 3D effect doesn't track well, resulting in a brief moment of disorientation. Finally, although James Horner's score is predominantly effective, there are instances in which he again engages in self-cannibalization. Material sounding a lot like it originated in his often-used Star Trek II and Aliens scores pops up from time-to-time.

There's a rush associated with coming to Pandora; this feels more like an interactive endeavor than a passive one. In addition to being emotionally satisfying and one hell of a wild ride, Avatar boasts a smart script, reminding us that would-be blockbusters don't have to be defined by imbecility. James Cameron has been entertaining movie-goers for forty years and he is in an elite category of filmmakers who have yet to spawn a dog. For quality like this, I'm willing to wait.

9/23/22 addendum: After re-watching “Avatar” thirteen years after its original release, I can state that time has not diminished it. “Cameron’s Folly” (as it was once called) remains the best use of 3-D ever committed to film. The images, enhanced using a new 4K master, are as crisp as ever, seeming to pop off the screen. On a purely technical level, “Avatar” has not been surpassed in the decade-plus since it first reached screens. World-building, which has always been one of Cameron’s strengths, is peerless. As for the story…well, it gets the job done. It’s a basic “hero’s journey” tale that had me ruminating about the fundamental similarities to “Star Wars: A New Hope.” No one has ever claimed that narrative was one of the foundational strengths of “Avatar.” It’s solid, it works, but it was never going to garner any Oscar nominations. I saw the re-release at 10:30 pm (ending around 1:30 am) and remained awake and engaged. These days, that’s an amazing achievement. Bring on the sequel…