It’s finally here. After years of missed release dates related to postproduction issues, James Cameron’s oft-delayed sequel to 2009’s Avatar has finally arrived. Was it worth the 13-year wait? Unquestionably. It’s difficult to overstate how impressive and potentially game-changing this motion picture is. Nothing before has prepared audiences for the immersion offered by Avatar: The Way of Water when seen in optimal circumstances. The film’s straightforward narrative (which isn’t going to garner any writing nominations) plays a distant second fiddle to the amazing technical leap forward that this movie offers. If theatrical movies are going to survive, this is the future – the kind of experience that will get me off my sofa and into a well-upholstered theater seat. The Way of Water gave me three-plus hours like no other three-plus hours I have spent in a multiplex. By alternating fast-paced action sequences with slower, more contemplative stretches, Cameron calms the blood pressure before repeatedly elevating it. Those in search of a rich emotional experience or complex storyline won’t find either here, but those things have never been the director’s bread-and-butter. He offers enough of both to allow his vision and his team’s technical bravura to smooth out any pacing inconsistencies and take the viewer down a dizzying rabbit hole. Awesome.

The sequel starts between 15 and 20 years after the first Avatar ended. During the peaceful interval between movies, Jake Sully (Sam Worthington) and Neytiri (Zoe Saldana) have been raising a family: eldest son Neteyam (Jamie Flatters), adopted daughter Kiri (Sigourney Weaver), younger son Lo’ak (Britain Dalton), and youngest daughter Tuk (Trinity Jo-Li Bliss). Also hanging around is Spider (Jack Champion), a human left behind (babies couldn’t be put into cryo-sleep for the journey home) who has “gone native.” Their idyllic lifestyle with the Forest Na’vi is shattered when a new group of Earthlings arrive in the skies of Pandora. Their objective this time isn’t stip-mining; it’s colonization. But, before they can tame (and terraform) the planet, they have to pacify the natives…by force. Led by General Ardmore (Edie Falco), the marines are given a “by any means necessary” mandate, which suits Colonel Quaritch (Stephen Lang) just fine. A Na’vi avatar implanted with the memories of the original Quaritch, this soldier has the same personality and intends to avenge himself upon the killer of his predecessor: Jake Sully. 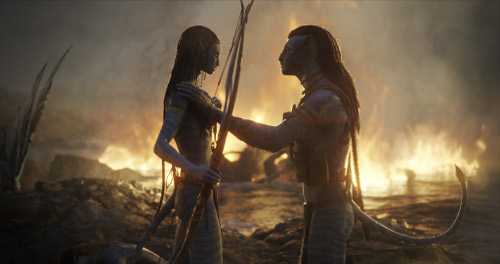 The humans arrive with a barrage of fire and brimstone. Quaritch takes a strike team in with the single goal of killing Jake and anyone with him. Following a brutal battle, Jake decides the only way to protect his people is to go on a run with his family. Abdicating his leadership position, he and Neytiri take their children on a long journey to a tribe of Na’vi who follow “the Way of the Water.” The newcomers’ initial reception is respectful but frosty. Eventually, the leaders – Tonowari (Cliff Curtis) and his pregnant wife, Ronal (Kate Winslet) – agree to let Jake and his family seek shelter with them. The decision comes with a price, however, because Quaritch will stop at nothing to achieve his ends. Collateral damage is irrelevant; he wants to bring back Jake’s scalp as a trophy. 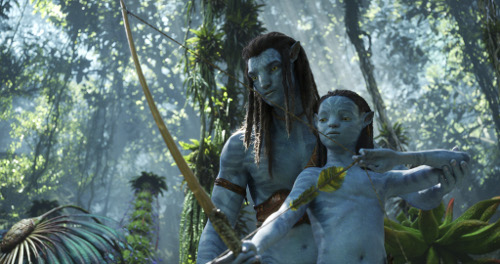 When it comes to the plot, let’s just say that The Way of Water isn’t going to redefine the genre. The overall narrative has a familiar quality and Cameron has cherry picked ideas and moments from some of his earlier projects (The Abyss, Titanic, and of course Avatar come to mind), although not to excess. But the storyline is sufficiently engaging and the characters all have arcs. One can argue that in a film like this, originality can be overrated and it’s often most important what a director does with “standard” material. No one is going to call Star Wars a screenwriting masterpiece but it is one of the most beloved science fiction films of all time (and one of the most influential).

No matter how many words I could use, I’d never be able to adequately describe the leap forward that The Way of Water takes. It’s as close to Virtual Reality as can be obtained in a movie theater. The visual effects are impressive on their own – CGI used in new ways to flesh out the first-rate world building begun in Avatar. The action sequences are cleanly choreographed and expertly shot – there’s no confusion about what’s going on. Cameron does what he has always done in ratcheting up the tension because it’s never a certainty who’s going to live and who’s going to die. The motion capture is top notch. There are very few humans in this film, making The Way of Water more of a hybrid animated/live-action movie. But when it comes to the 3D…

Back in 2009, Cameron made a forceful pro-3D statement with Avatar. It was one of only a handful of masterful uses of the technology. Unfortunately, Hollywood became infatuated not so much with the technique as with the ticket surcharge and this resulted in a cascade of cheaply made, awful looking 3D films. The Way of Water re-invents 3D, exceeding by an order of magnitude what Cameron did in 2009. It’s a completely different experience watching this movie on a big screen with 3D images than it is watching it on a nice-sized OLED TV set in 2D. Will the latter version still be a four-star film?  Probably not because it fundamentally isn’t the same movie. To see The Way of Water in all its glory, 3D theatrical viewing is mandatory. (That’s unfortunate for those who, for one reason or another, are physically unable to attend anything in 3D or who have sworn off theaters.) If Hollywood learns the right lesson from The Way of Water – a lesson about the precision and craftsmanship necessary to do 3D right – this could be the key to unlocking the future of movie theaters. 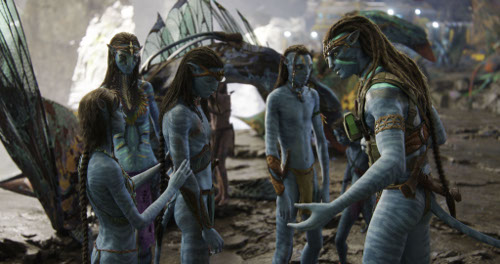 For world building, it’s hard to find any filmmaker (excepting perhaps Peter Jackson) who is more adept. Cameron expends much narrative capital and even more special effects further developing Pandora. Whereas the first Avatar transpired mainly in the forests, this one takes the action across an ocean and into new biomes. Those expecting wall-to-wall action may be bored by instances of “down time,” but these scenes are critical to expanding the canvas. (The diving scenes are beguiling in 3D; I suspect they may provide bathroom break opportunities for those watching in 2D.) Many of the principals from Avatar are back. Sam Worthington and Zoe Saldana are again the stars, although their roles have been reduced. Stephen Lang provides a different iteration of Quaritch; although he was a fairly one-dimensional villain in Avatar, Cameron allows for expansion and development this time around. Sigourney Weaver makes her third appearance for the director (tied for Schwarzenegger for second place behind Bill Paxton); however, although she once again plays Dr. Grace Augustine in flashbacks and dream sequences, her primary contribution is as Kiri, who is Grace’s biological daughter (the identity of her father is a secret). Newcomers include Kate Winslet, who is familiar with how Cameron films water sequences, and Cliff Curtis. The “next generation” is represented by Jamie Flatters, Trinity Jo-Li Bliss, Jack Champion, Britain Dalton, and Bailey Bass (the characters played by the latter two evince a low-key attraction that shows how much better Cameron does this sort of thing than George Lucas).

A quick comparison of The Way of Water with the most recent MCU release (which also has numerous underwater scenes), Wakanda Forever, illustrates how much bolder Cameron is when it comes to world-building, character arcs, and narrative trajectory. Compared to this film, even the best recent superhero entries feel stale and rote. The Way of Water excites both in terms of its visual presentation and the way in which it has been fashioned. There’s an energy here that has been sadly absent from too many recent Hollywood blockbusters. For 2022, The Way of Water may not be the most intricately made or intellectually rigorous motion picture, but it exemplifies what “cinematic” means today.