Since debuting in a 1938 issue of New Yorker magazine, Charles Addams’ illustrated characters have become one of America’s most recognizable nuclear families. Although there have been approximately a dozen incarnations over the years, the two best-known are the 1964 TV series and the early 1990s movies. Although The Addams Family has experienced TV cartoon treatments (in 1972, 1973, and 1992) and Tim Burton was at one time involved in a motion capture project, this is the first time an animated feature film has made it to the screen. The result, although faithful in its look to Addams’ vision, is a disappointment. Lackluster and restrained, it employs a dull story to present a message about the importance of diversity and the evils of assimilation. With sledgehammer subtlety, it transforms the antics of the titular clan into a tract for political correctness.

Okay, so it’s a family film and, considering that a significant portion of the audience will be made up of children, maybe it’s necessary to spell out the moral. But narrative shortcomings aren’t the film’s only flaw. The animation is perfunctory – good enough to recreate Addams’ design but lackluster by today’s standards. And the voicework is variable at best. Although Oscar Isaac and Charlize Theron are fine as Gomez and Morticia Addams and Conrad Vernon does a passable Ted Cassidy imitation as Lurch, Chloe Grace Moretz’s Wednesday isn’t going to make anyone forget Christina Ricci’s contributions to the character. 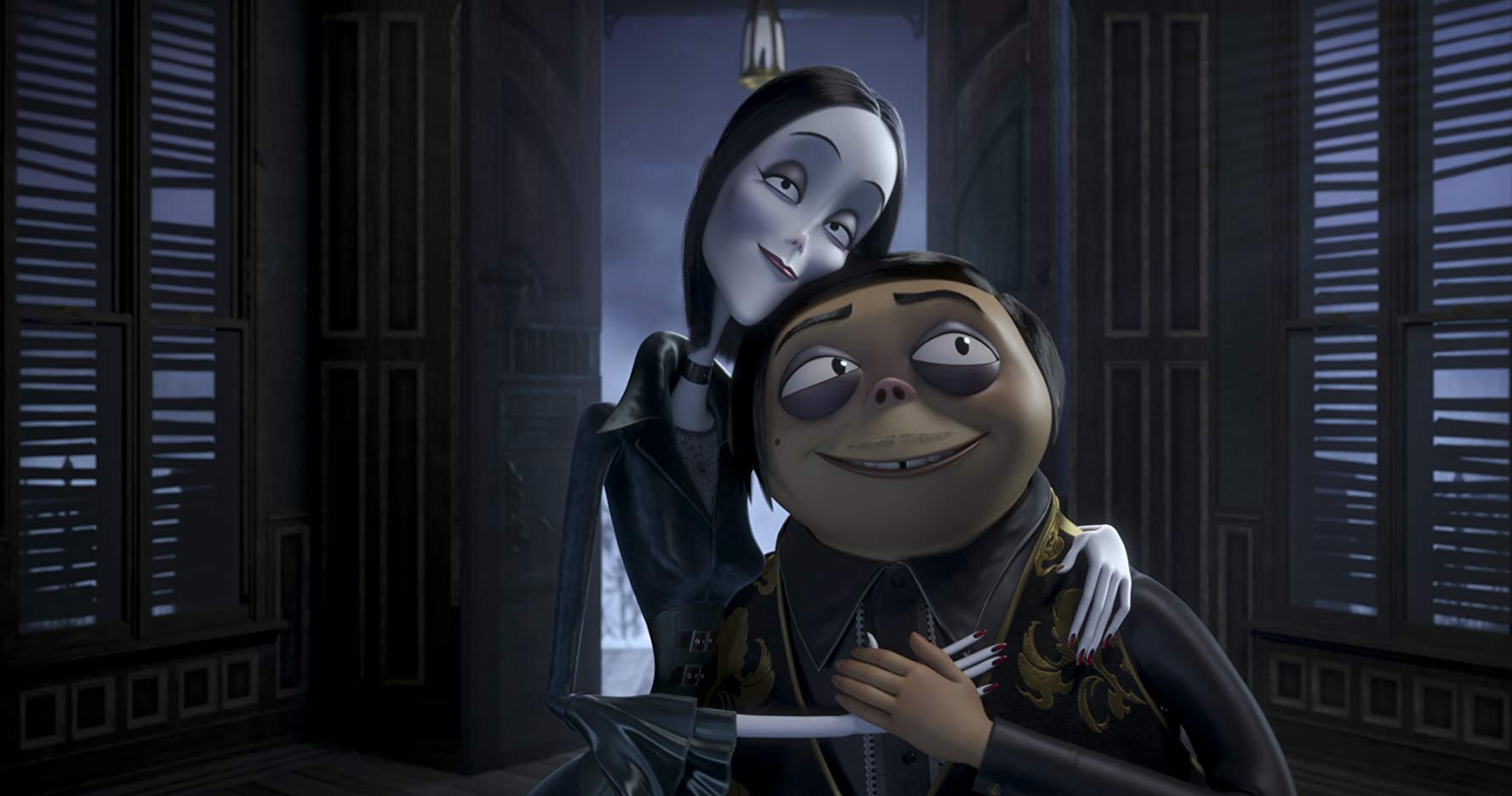 From a story perspective, this version of The Addams Family wants autonomy so it starts from the beginning with a prologue showing the wedding of Gomez and Morticia, their flight from an angry mob across the Atlantic to Westfield, New Jersey (birthplace of Charles Addams). They recruit a giant mental patient named Lurch to serve as the butler for their new home – a decrepit former asylum that has been disused for some time. Thirteen years later, we reconnect with the Addams Family, who have settled into their house and started a family. Their son, Pugsley (Finn Wolfhard), and daughter, Wednesday, are approaching their rebellious teenage years. The former is on the cusp of his manhood ritual, which will involve a gathering of Addams relations near and far. The first to arrive is Uncle Fester (Nick Kroll), Gomez’s brother. Others will soon follow.

Meanwhile, in the nearby town of Assimilation, USA, reality show star Margaux Needler (Allison Janney) decides that the creepy looking house at the top of the hill has to undergo a makeover (for ratings purposes, of course). When her efforts fail to convince the Addams’ to brighten things up, she opts for another approach – one that uses social media to smear the family and raise the specter of the modern equivalent of pitch forks. The gulf between “humans” and “monsters” is bridged by Wednesday and Margaux’s goth daughter, Parker (Elsie Fisher, the Eighth Grade girl), who become good friends. 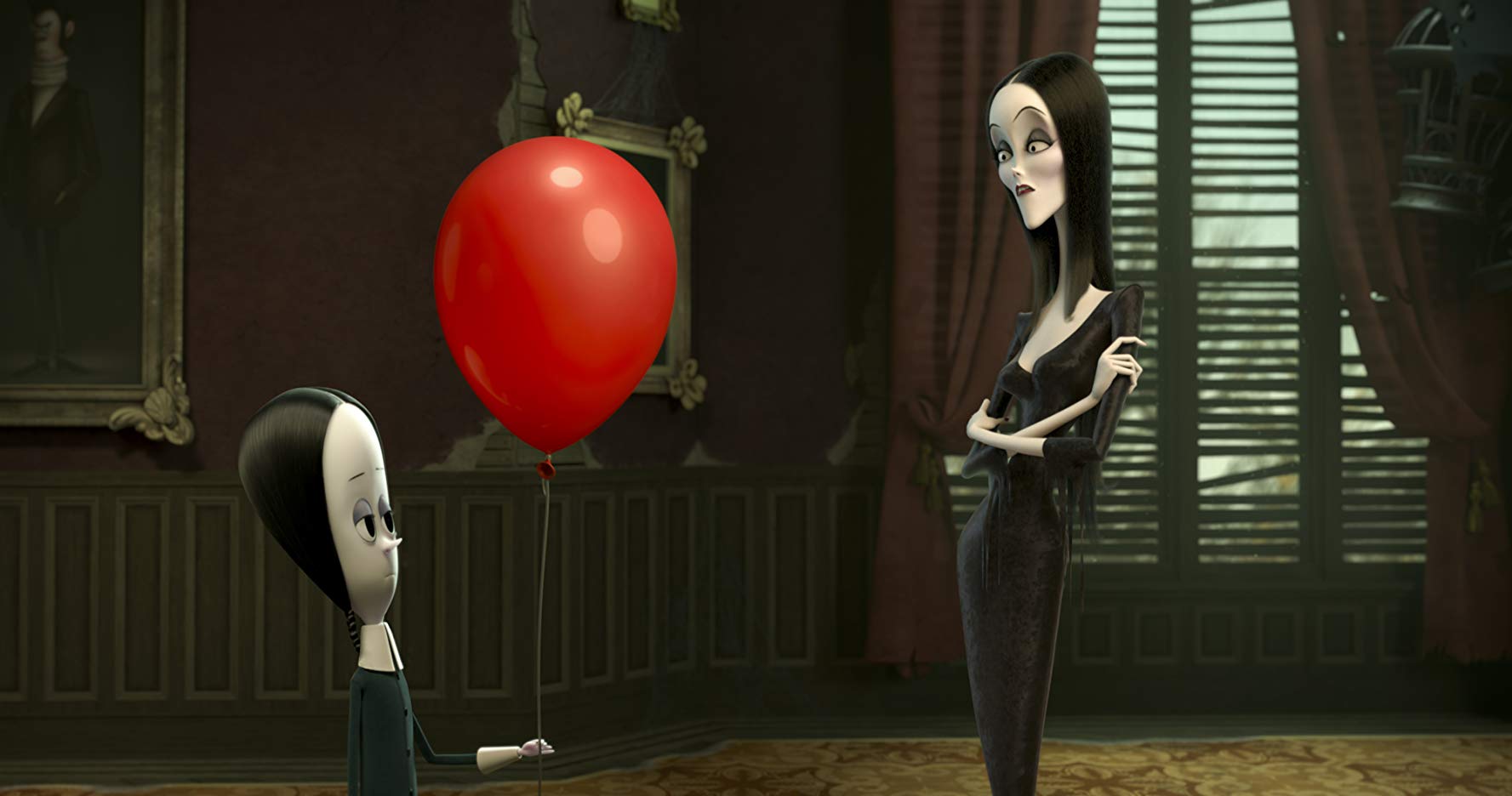 With John Astin and Raul Julia playing Gomez in the TV series and movies, respectively, the character has become known as a debonair sort. For this film, the animators have used Peter Lorre as their inspiration – not coincidentally because Lorre was Charles Addams’ model for his drawings. The movie includes numerous references to the TV program, most notably Lurch’s signature line of “You rang?” and the use of the iconic Vic Mizzy song. (The TV show’s opening credits are recreated shot-by-shot for the film’s closing credits.)

For his cartoons, Addams had a single panel. For the TV series, each episode ran about 23 minutes. Although there were two successful feature length films, the plodding, uneven nature of this movie makes a convincing case that brevity is best for this uncommon family. There’s always a sense that the movie should be funnier, livelier, and more colorful than it is. Its avoidance of anything edgy gives it a disappointingly bland flavor that is only partially salted by the occasionally effective witticisms.

The decision to pitch the film primarily toward those in the 8-10-year old range was arguably a mistake – the subject matter is probably too outdated to enthrall many children and the decision to neuter and sanitize the material will impinge on any nostalgic component. The Addams Family was probably mounted with the hope that it would begin a new era of franchise films for the venerable property. Based on the evidence at hand, that seems unlikely. This feels more like a second-tier animated offering than a major opening and the box office response will likely mirror that.