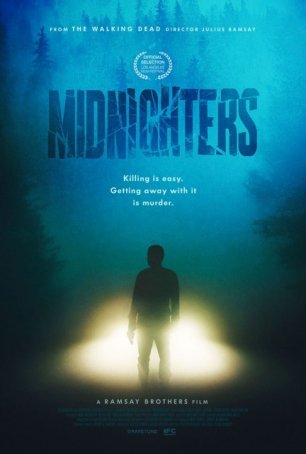 Midnighters takes a common situation – one fueled by too much alcohol and too little attentiveness while driving – and uses it as the jumping-off point for a series of events that puts a working class couple’s life into a tailspin. With a restrained screenplay that focuses as much on interpersonal relationships as it does conventional thriller twists and turns, the movie works as a tightly-plotted excursion into the terror that evolves when circumstances prod normal people to commit ugly acts. By focusing more on suspense and tension than gore, the brothers Ramsay (director Julius, writer Alston) have crafted an economical and effective alternative to the many disappointing big-budget entries into this genre.

It starts out on New Year’s Eve. With the strains of “Old Lange Syne” still echoing in the background, couple Lindsey and Jeff Pittman (Alex Essoe and Dylan McTee) renew their annual resolution that this will be “the year” for them. Not too long after, as they navigate the twisty road that leads to their fixer-upper home, circumstances conspire to make the fulfillment of the resolution unlikely. A few too many drinks, perfunctory attention on the road ahead, and a shape caught only at the last minute by the car’s headlights combine to put Lindsey and Jeff in a bad situation. Ill-advised decisions follow: leaving the scene of the accident (no cell phone reception to call it in), bringing the body with them (he expires in the car), and going home instead of to a police station or the hospital (their blood-alcohol levels would lead to drunk driving charges). As they’re trying to figure out what to do next, Jeff realizes the license plate, dislodged during the accident, was left behind. After he has left to retrieve it, Lindsey’s sister, Hannah (Perla Haney-Jardine), arrives home from her date and discovers the “dead” man in the car isn’t dead after all. Thinking him to be an intruder, she shoots him, trapping her sister and brother-in-law in a web of lies that begin when a couple of uniformed cops show up early the next morning, followed by a suspicious detective (Ward Horton) later on.

One strength of Midnighters is the simplicity of the set-up. Lindsey and Jeff are an ordinary couple and the initial incident is the result of a carelessness that many people fall prey to. Viewers witness how the nightmare unfolds as bad decisions give birth to a life-altering situation that require deceit (and possibly darker actions) to cover up. Add in a cop who doesn’t go by the book and a mysterious claim ticket, and Midnighters has just the right amount of mystery to maintain an audience’s interest.

This is the feature debut of director Julius Ramsay, whose previous TV credits include a couple episodes of The Walking Dead. His brother, Alston, who wrote the script, has moved from Washington to Hollywood for this effort. Before joining Julius to make Midnighters, he was a speechwriter for Secretary of Defense Robert Gates, General David Petraeus, and Homeland Security Secretary Jeh Johnson. For the cast, the Ramsays have used competent but mostly unknown actors. Their performances are strong enough for us to accept them in these roles and there’s an added bonus that comes with their not bringing along baggage from previous performances. This same movie, if made with a famous cast, would have a different tone.

Midnighters oozes atmosphere. The early point-of-view windshield shots as the Pittmans drive home foreshadow bad things to come. Viewers know there’s going to be an accident before it happens, yet it nevertheless offers the film’s most effective jump scare. Although the production is best classified as a thriller, Ramsay uses horror film plot devices to keep the audience uncertain and uneasy. There are plenty of “What would you do?” moments that invite viewers to put themselves in the main characters’ increasingly dire predicament and (thankfully) no instances when dumb, artificial character actions are required to impel the story forward. All-in-all, Midnighters offers is a compulsively watchable thriller that represents a calling card for the Ramsay brothers for the movie industry.