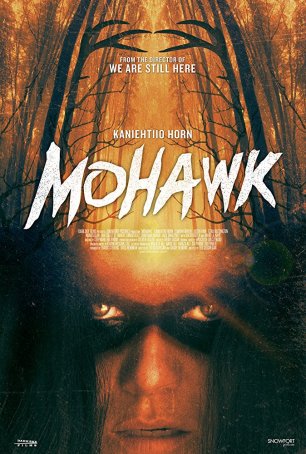 A slickly-made exploitation film set during the War of 1812, Ted Geoghegan’s Mohawk is taut, bloody, and uncompromising – all with a dollop of social commentary thrown in for good measure. Like the recently released Hostiles (which is set some 80 years beyond the time frame of Mohawk), the film addresses the ugly, often brutal conflicts that erupted between the American soldiers who were “taming” the land and the Native Americans who were fighting to preserve their dignity and way of life. The resulting clashes gave birth to atrocities on both sides. In Hostiles, which transpires at a time when the question of dominance was settled, the theme is one of acceptance. In Mohawk, taking place while the genocide was still underway, the approach is more visceral.

The story is presented from a perspective decidedly favorable to the Native Americans. The Mohawk woman Oak (Kaniehtiio Horn) and her two lovers, warrior Calvin Two Rivers (Justin Rain) and British soldier Joshua (Eamon Ferren), are struggling with the tribe’s official stance of neutrality in the conflict between the United States and England. As the film opens, we learn that Calvin has taken a decisive action to disrupt things by staging a murderous raid on an American encampment. A group of soldiers led by the grizzled bigot Colonel Hezekiah Holt (Ezra Buzzington) take immediate, punitive action. Oak, Calvin, and Joshua flee for their lives with Holt’s men in pursuit. Things take an ugly turn when Calvin is captured and Holt is disinclined to show anything resembling mercy. 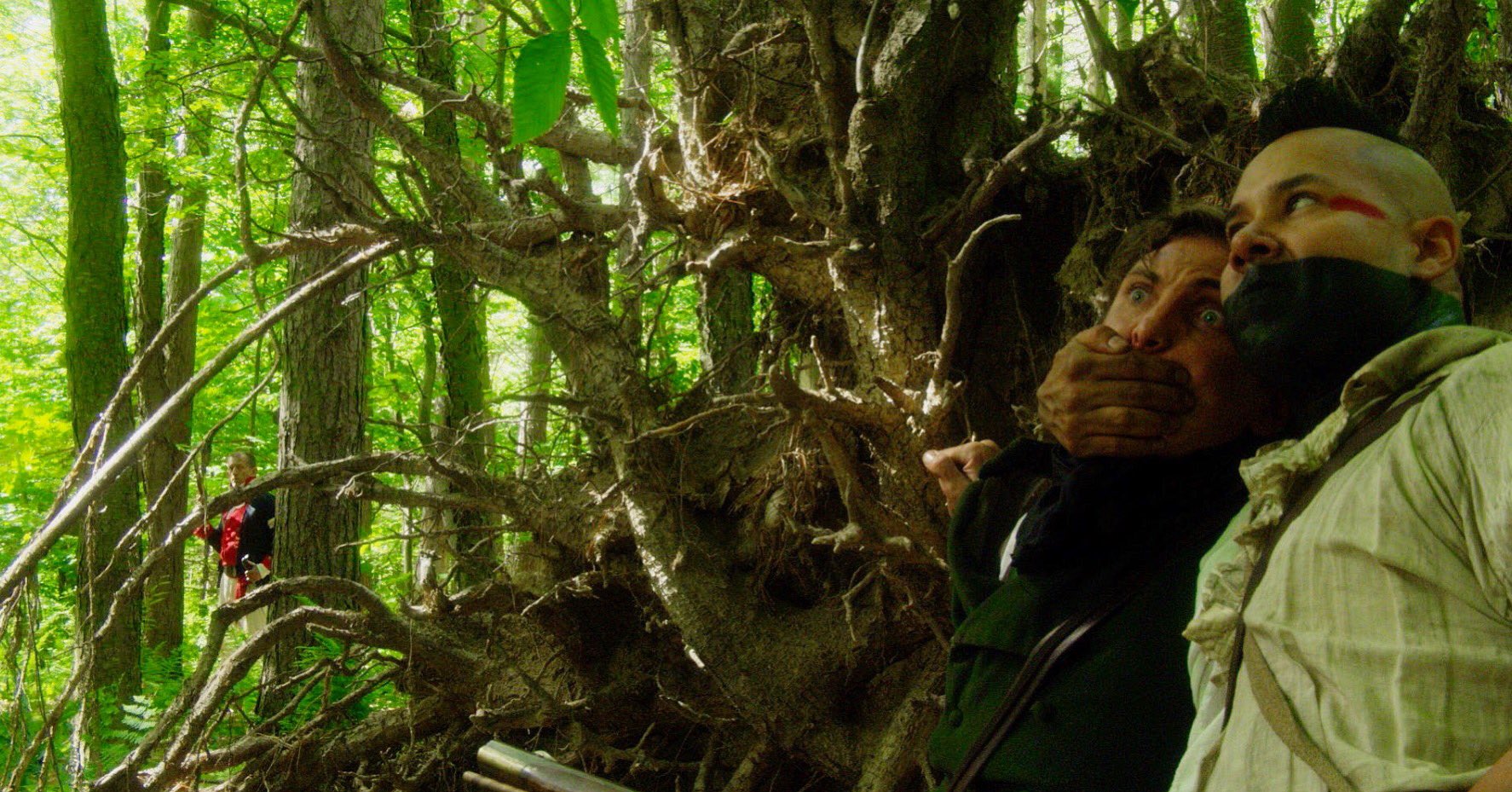 As befits an exploitation film, there’s plenty of graphic brutality. The camera doesn’t spare viewers the details of a torture scene or the various deaths that occur during the course of the proceedings. There are also enough jump scares to give theater seat springs a workout. The movie boasts high production values – Karim Hussain’s cinematography is evocative, turning the woods into an almost supernatural habitat, and Wojciech Golczewski’s heavily electronic score is insistent and pounding. The film’s period elements are questionable – Mohawk doesn’t feel as if it’s unfolding in 1814 – but there’s an otherworldliness to its aesthetic.

The film’s political persuasion is evident from the start: Native Americans are good and noble; American soldiers are murderous. This is as disingenuous as making a World War 2 movie in which all the Germans are portrayed as cruel, venal Nazis.  Although an obvious revisionist reversal on the countless “Cowboys and Indians” films from the first half of the 20th century, the film’s unbalanced approach disallows a more nuanced exploration of the complex issues underlying the expansion of white America and the heinous acts committed in the name of Manifest Destiny. Admittedly, the average exploitation film isn’t terribly interested in things like “nuanced” and “complex” but one gets the sense that Geoghegan wants Mohawk to be more than an orgy of blood, gore, and violence. The film cheats when it comes to setting the audience’s perspective: Calvin’s massacre (which sets things in motion) occurs off-screen while the grizzly acts committed by the American soldiers are presented in their full, bloody detail.

There’s an odd subplot in Mohawk about a supernatural entity that works around the periphery, appearing in visions and raising one character from death. Although the creature’s introduction into the story moves Mohawk more firmly into the horror genre, it’s problematic at best, functioning only as a plot device and never being well-integrated into the narrative as a whole.

Mohawk made its international debut at the 2017 Fantasia Film Festival, where the reaction was generally positive. For Geoghegan, this was a change-of-pace and an attempt to broaden his range. In this follow-up to his feature debut, the well-received horror film We Are Still Here, he has attempted to move away from the conventional side of the genre into something more unusual and meaningful. Yet, despite the historical setting and trappings, Mohawk is likely to work better for those who don’t care much about those things. As a straightforward horror/thriller about a conflict between noble heroes and detestable villains, the film works reasonably well. However, as an attempt to re-examine history from a pro-Native American perspective, it’s less convincing. I have no doubt that Geoghegan’s intentions are sincere but the muddling of historical fiction with the Grand Guignol is an uneven mix that never fully gels.