Time Trap is a superficially entertaining science-fiction action/adventure film that might have worked better had it focused more on the “science fiction” elements and less on the halfhearted “action/adventure” ones. Movies about time travel, whether high concept pop culture endeavors or more philosophical in nature, are minefields for filmmakers unwilling to get deep in the weeds. Successful time travel pictures require details-oriented directors with a stable and consistent approach to contending with the mechanics and paradoxes. There’s little evidence that this is the case in Time Trap, which is content to “change the rules” to fit the circumstances.

As Time Trap starts, we’re introduced to Hopper (Andrew Wilson), an archeology professor who has made searching for his missing parents his life’s goal. Now, having finally located their van, he thinks he might be getting close to the truth when he stumbles on a cave where a gun-toting cowboy appears trapped in time like a fly in amber. Throwing caution to the wind, Hopper enters, never to be heard from again by the outside world. A few days later, his two favorite students, Taylor (Reiley McClendon) and Jackie (Brianne Howey), their friend, Cara (Cassidy Gifford), and a couple of tween tag-alongs, Veeves (Olivia Draguicevich) and the terminally annoying Furby (Max Wright), decide to do a little impromptu spelunking. With Furby staying behind, the others go underground in search of Professor Hopper and find, among other things, Neanderthals, conquistadors, the Fountain of Youth, and a maybe-space alien. Oh, and the cave system exists in a pocket of the space/time continuum where years on the outside become seconds on the inside. They are in the cave for at least an hour when they – being a little slow on the uptake – figure this out. By then, the world they knew has long since ceased to exist, Star Trek’s time frame is long past, and their great-great-great-etc. grandchildren are pushing up daisies.

Give co-directors Ben Foster and Mark Dennis (with Dennis listed as the sole screenwriter) credit for being willing to get outlandish with things. Whatever problems Time Trap may have, it’s never boring. It moves along at a nice clip and some of its time-travel related problems (most notably as they relate to Furby) are easy to overlook. There are other things that don’t necessarily make sense but, hey, in for a penny, in for a pound. Don’t think too hard and it won’t bother you. The movie seems a lot smarter than it is. This isn’t Arrival or Interstellar, although I’m sure Foster and Dennis would be delighted if anyone was to make the comparison. 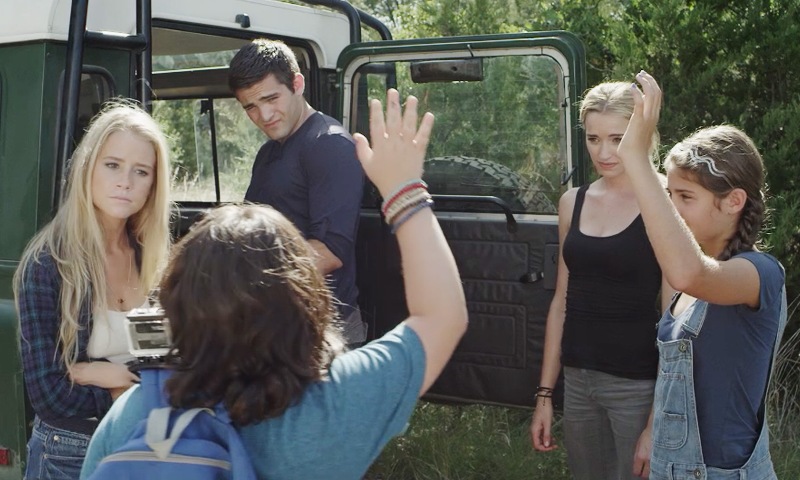 The Neanderthals are on hand primarily to provide a source of action in a film that might otherwise be deemed too slow and philosophical. Their existence – like a lot of things in Time Trap – isn’t explained but they are real, dangerous, and necessary for forcing the narrative in a specific direction. There are also a couple of times when the movie falls back on the crutch of video exposition as a means of explaining to the characters (and the audience) what should be obvious.

The movie consistently looks good, which is probably a testimony to careful cost management. Hollywood could learn a thing or two about how to economize; Time Trap looks better than one would ever expect from a low-budget indie film. Although there’s a wooden quality to some of the performances, the cast members exhibit sufficient chemistry to overcome the acting deficiencies. They’re a likable group.

Time Trap has a clearly-defined “through” story but it never bothers with the details. Many little things either can’t be explained or, if they can, they aren’t. There’s a Lost feeling to the proceedings – a sense that “mystery” is something to be savored when it’s really just a prop to allow the filmmakers to ignore narrative aspects they can’t explain. Like many so-called “refrigerator movies,” this one falls apart if subjected to an in-depth post-screening autopsy. In the moment, however, it’s entertaining and chock-full of enough deliciously weird interludes that it’s impossible to be too harsh.

For Foster and Dennis, Time Trap (which has played a few film festivals in advance of a limited theatrical opening followed by a VOD/digital rollout) is a solid calling-card.