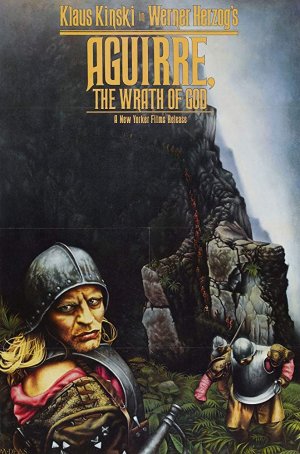 A ragtag column of men, many dressed in full armor and others lugging an enclosed sedan chair, wend their way down a treacherous mountainside path. This is the first image we see in Werner Herzog’s Aguirre, the Wrath of God. He holds it for nearly three minutes, allowing us to absorb not only the details of the setting but the absurdity of the endeavor. It has always been the way of the world that although civilization can obliterate wilderness (and vice versa), the two rarely co-exist. For a cultured, city-bred person to venture into as untamed a place as the Peruvian Amazon, there are only two possibilities: madness and death, and those aren’t mutually exclusive.

Like Francis Ford Coppola’s Apocalypse Now, which was made several years after Herzog’s film and cites it as an inspiration, Aguirre is about what happens when men venture into the heart of the jungle and face threats they are unprepared to counter. Although Aguirre is largely fictional, Herzog drew on a couple of historical expeditions from the late 1500s – quests to expand Spain’s New World influence and locate the legendary city of El Dorado – for inspiration. He chose to film on location – a decision that caused hardships for the cast and crew but resulted in an undeniable verisimilitude. The movie offers a powerful sense of being stranded and untethered. We realize in the early-going that this isn’t about people surviving; it’s about people failing to survive.

It’s 1560 and a large contingent of Spanish conquistadors and their Indian slaves has ventured east of the Andes in search of fabled riches. Their commander, Gonzalo Pizzaro (Alejandro Repulles), eventually recognizes that continuing forward – a slow process that requires cannons to be pulled through deep mud with diseased men dying along the way – is foolish. With supplies running out, Pizzaro orders 40 souls to scout ahead. They have one week – if they haven’t returned by then, they will be declared “lost” and the expedition will return the way it came. 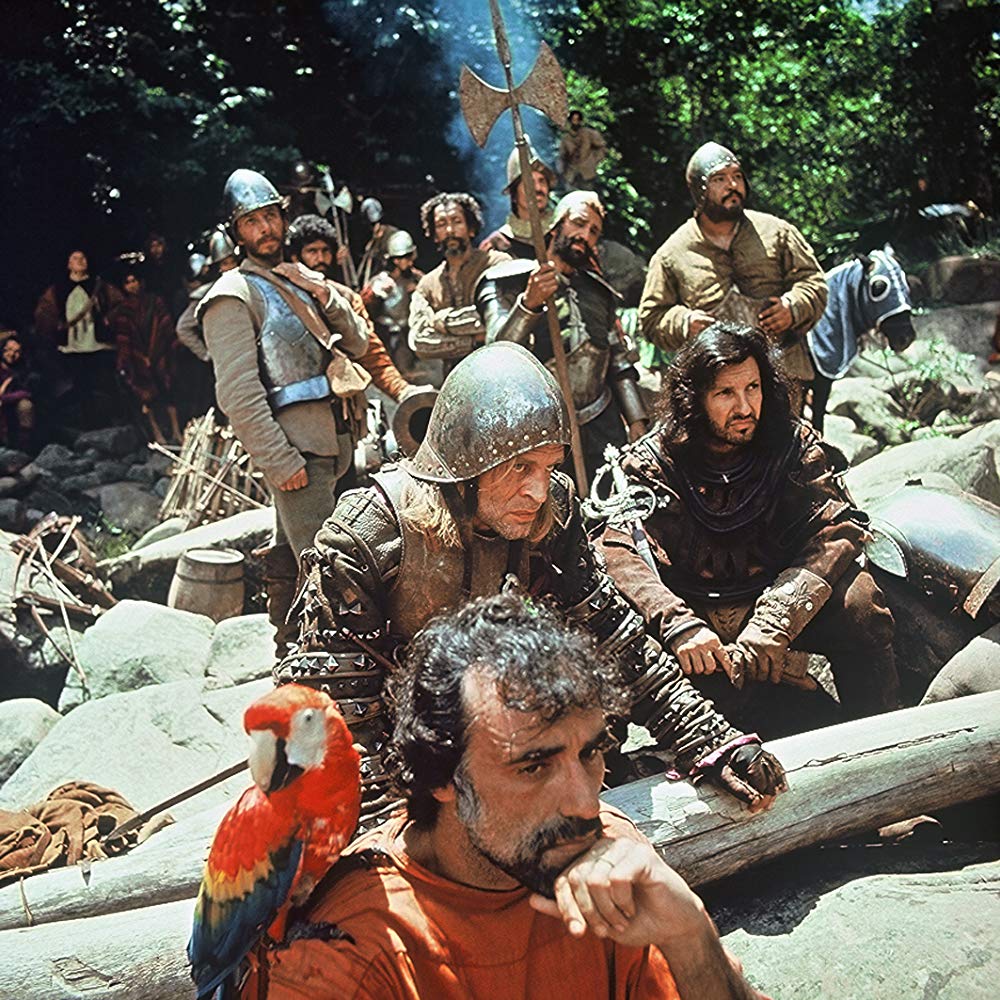 The journey takes the group downriver and into dangerous rapids. One of the rafts becomes trapped in an eddy. The rest of the men make camp but the next morning, all the men on the raft are dead. As Ursua ponders abandoning the mission, Aguirre mutinies, shooting Usrua and putting Guzman in charge as a figurehead. Aguirre, whose mind is already gone, rants about conquest and riches and orders the men to build a massive new raft to transport the remainder of the expedition down the Amazon into dangerous and unknown territories where Indians shoot from cover on the banks and cannibals leave behind abandoned settlements. Ursua is tried and found guilty but Guzman (to Aguirre’s surprise and consternation) pardons him. That small kink in the plans, however, does nothing to dim the madman’s determination to achieve glory.

The movie doesn’t have much of story and there isn’t a lot of dialogue. Aguirre is about moods, moments, and images. It’s about developing a tone of isolation and peril and stranding both the characters and the audience in that place. Most of all, it’s about the performance of Klaus Kinski, whose chilling interpretation of Aguirre is quietly menacing and entirely too believable. Stories abound about the clashes between Herzog and Kinski deep in the South American jungle. One alleges that the director brandished a weapon and threatened to shoot Kinski if he walked off the set. Whatever the case, the toxic chemistry between the two was potent enough to keep them together – they made four more films with each other after this, their first collaboration. 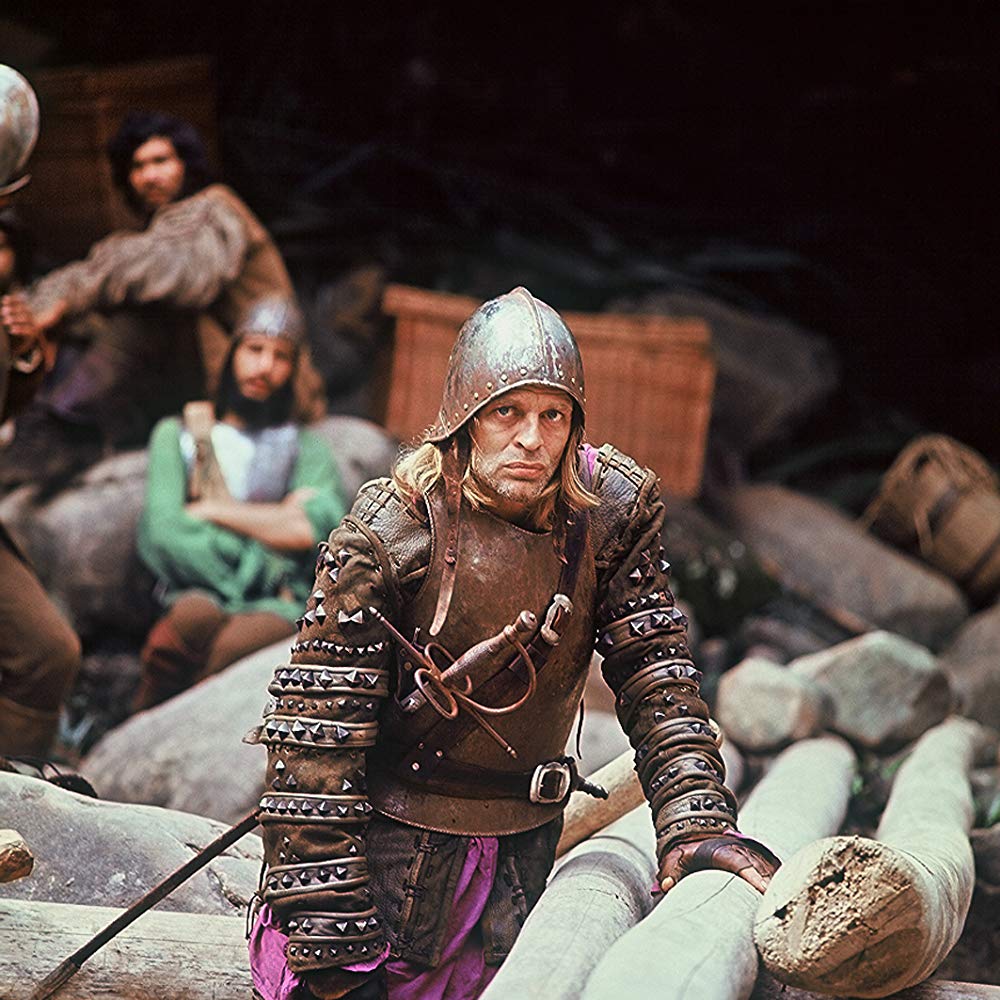 The soundtrack is a cobbled-together affair with the haunting sounds of progressive band Popol Vuh blending seamlessly with the jungle and river’s ambient noise. All of the dialogue was recorded in English – a necessity because it was the only language understood by everyone. Although Herzog originally planned to release the film in English, it proved difficult so a high-quality German dub was created for theatrical distribution. (Because Kinski demanded an outrageous sum to re-record his lines, Aguirre is voiced by another actor.) On DVD, however, the original English track is available and is the preferred way to watch the film (in part to hear Kinski’s voice).

Aguirre’s reputation has grown over the years in parallel with Herzog’s greater recognition as one of his generation’s most accomplished filmmakers. It’s a slow, hypnotic movie that requires a certain level of patience from the viewer and an expectation that not a lot is going to happen. Many have cited similarities between this movie and Terrence Malick’s 2005 feature The New World. Indeed, the films are similar in the way they prioritize style and ambiance over narrative and character. Aguirre is a compelling piece of historical fiction that lingers in the memory largely because of its lush, claustrophobic atmosphere and the towering presence of Kinski.