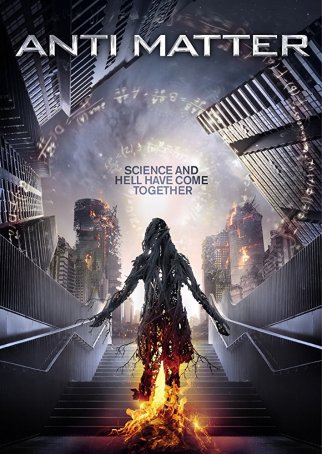 With most big-budget science fiction movies ignoring intelligence in the unhealthy pursuit of orgiastic special effects, the realm of the idea-based sci-fi film has been co-opted by low-budget indies. In that vein, along comes Anti Matter, the existential successor to 2015’s Ex Machina. Narratively, the films don’t have a lot in common but they are soul-mates when it comes their underlying production philosophies and thematic material. Like Ex Machina, Anti Matter uses its story as an opportunity to explore issues about the meaning of identity. At various times, Anti Matter also recalls Flatliners and Memento, films that may have influenced its DNA in one way or another.

Anti Matter’s protagonist is Ana (Yaiza Figueroa), an Oxford-based PhD student who, during the course of routine experiments, accidentally discovers the building blocks of teleportation. Aided by her fellow researcher, Nate (Tom Barber-Duffy), and a computer hacker named Liv (Philippa Carson), she gradually perfects the invention. Beginning with small, inanimate objects, the trio builds toward the Holy Grail: successfully transporting a human across a short distance. Ana gets the dubious honor of being the guinea pig. She steps into the field and…awakens at home the next morning, disoriented and with no memory of what happened.

Ana’s life becomes a surreal, nightmarish experience and, by varying the way he shoots things, writer/director Keir Burrows draws us into her world. Unable to create new short-term memories, she relies on a notepad to keep track of things. Her formerly friendly co-workers are cold, bordering on hostile. A man in an ape mask breaks into her apartment and steals information about her experiments and her passport. Long-distance conversations with her mother take on a strange tone. Something is obviously wrong and the deeper Ana investigates, the more concerned she becomes about what may have happened during the experiment.

Although Anti Matter is steeped in science fiction, it is presented as a mystery/thriller. While the philosophical notions posed by Ana’s experiment form the film’s most intellectually stimulating aspects, the “what’s happening?” question fuels the narrative’s momentum. Some of the screenplay’s contortions become unnecessarily complicated. Many involve an animal rights’ activist group whose purpose – fueling Ana’s paranoia – could have been accomplished with more economy. One action sequence – a chase in which Ana pursues the ape-masked intruder – is well-filmed but seems extraneous, as if someone was afraid Anti Matter needed a jolt to prevent it from becoming too cerebral.

Anti Matter’s science is questionable at best but it throws around technical terms with such confidence that only those in the field will recognize the cheats and misdirection. Burrows is clever about the way he approaches science, never going so deeply into the weeds that he gets caught making a preposterous claim. Instead, he carefully constructs a scenario dripping with plausibility even if, on a practical level, it’s not realistic. But this is science fiction and part of the equation is “fiction.”

Quibbles aside, the movie is consistently involving because it invites the viewer to explore the implications of this technological breakthrough alongside the main character. As things deteriorate, we’re forced to confront the undeniable: every great invention has a dark side. Just because a thing can be done doesn’t mean it should be done. And, while we’re wondering about that, we also get to think about things like the importance of memory to one’s identity and what it means to have a soul. That’s a lot for any movie to achieve and it makes me thankful that some filmmakers have budgetary limitations because too often the level of creativity in stories like this is inversely proportion to the amount of available funds. Its video-on-demand availability makes Anti Matter easily accessible and it will reward those who seek it out.