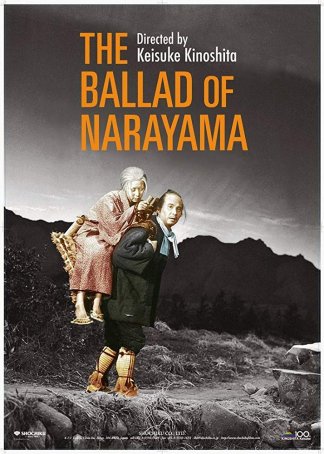 The Ballad of Narayama, a 1958 Japanese film from director Keisuke Kinoshita, is revered in some critical circles because of its extreme stylization – using the art of kabuki theater to form a template for the exploration of Shichiro Fukazawa’s novel. Roger Ebert, in one of his final reviews, awarded the film four stars, and he was not alone in his praise for it. However, the reason why some critics laud the production is why I don’t believe it works. Kabuki on film is a hard sell, especially for a Western audience. (I am aware that there’s a cultural divide involved here both in terms of the era when The Ballad of Narayama was made and the tradition in which it exists.) Its artifice creates a unique, theatrical aesthetic but that leeches away any emotional connection with the characters. They are too obviously actors playing parts – chess pieces being moved around by a filmmaker. We are aware of the movie’s central tragedy on an intellectual level but it doesn’t touch us the way it should. As a result, The Ballad of Narayama feels drawn-out, like a film school short that has been stretched beyond its natural length.

The Ballad of Narayama transpires in a remote Japanese village where food shortages have resulted in a policy that, once someone turns 70, a close family member will carry them up into the mountains to a place called “Narayama,” where they are left in the open to die of exposure. There are rules associated with the activity – no talking is allowed inside Narayama, no one must see the soon-to-be-dead person and his/her caretaker depart, and the caretaker cannot look back once the deed is done. Some embrace this more willingly than others, seeing it as a necessary sacrifice and natural progression of life.

One such person is Orin (Kinuyo Tanaka) who, as she approaches her 70th birthday, speaks with anticipation of “going to Narayama.” Death holds no fear for her. Her family is divided. Her son, Tatshuei (Teiji Takahashi), is unwilling to face his part in the journey (he will be the one to carry her). Orin’s grandson, however, is looking forward to her being gone, since it will leave more food for him and his growing brood. Meanwhile, in the same village, an elderly man, Mata (Seiji Miyaguchi), approaches his end with less calmness and nobility. He doesn’t want to die and, in the end, his son has to tie him up in order to get him to make the trip.

The film is presented almost like a puppet show with live actors taking the place of marionettes. This is especially evident during the film’s visually arresting final 15 minutes, when there is almost no dialogue. In order to convey strong emotions (especially with Kinoshita electing not to use close-ups), the actors (notably Teiji Takahashi, who plays the son) employ exaggerated movements similar to what one sometimes sees in stage plays (an affectation necessary to inform viewers in the “cheap seats”). This type of overacting was common during the silent era and carried over into the early talkies but it’s surprising to see it in a 1958 production and is another result of steeping The Ballad of Narayama in the kabuki tradition.

The style is an attempt by Kinoshita to present The Ballad of Narayama as a fable. While most films strive for some degree of “reality” (at least within the universe where they transpire), this one embraces its essential “surreality.” The village is rendered on a soundstage (complete with a running brook) with detailed matte paintings serving as backdrops. The Narayama location is populated by black crows and the skeletal remains of those who have previously arrived to do their duty. It’s a grim, foreboding place, especially once a thin covering of snow blankets it. Kubuki trappings are everywhere, from the acting mannerisms to the usage of a (singing) narrator to the unique musical score emphasizing strings and percussion. 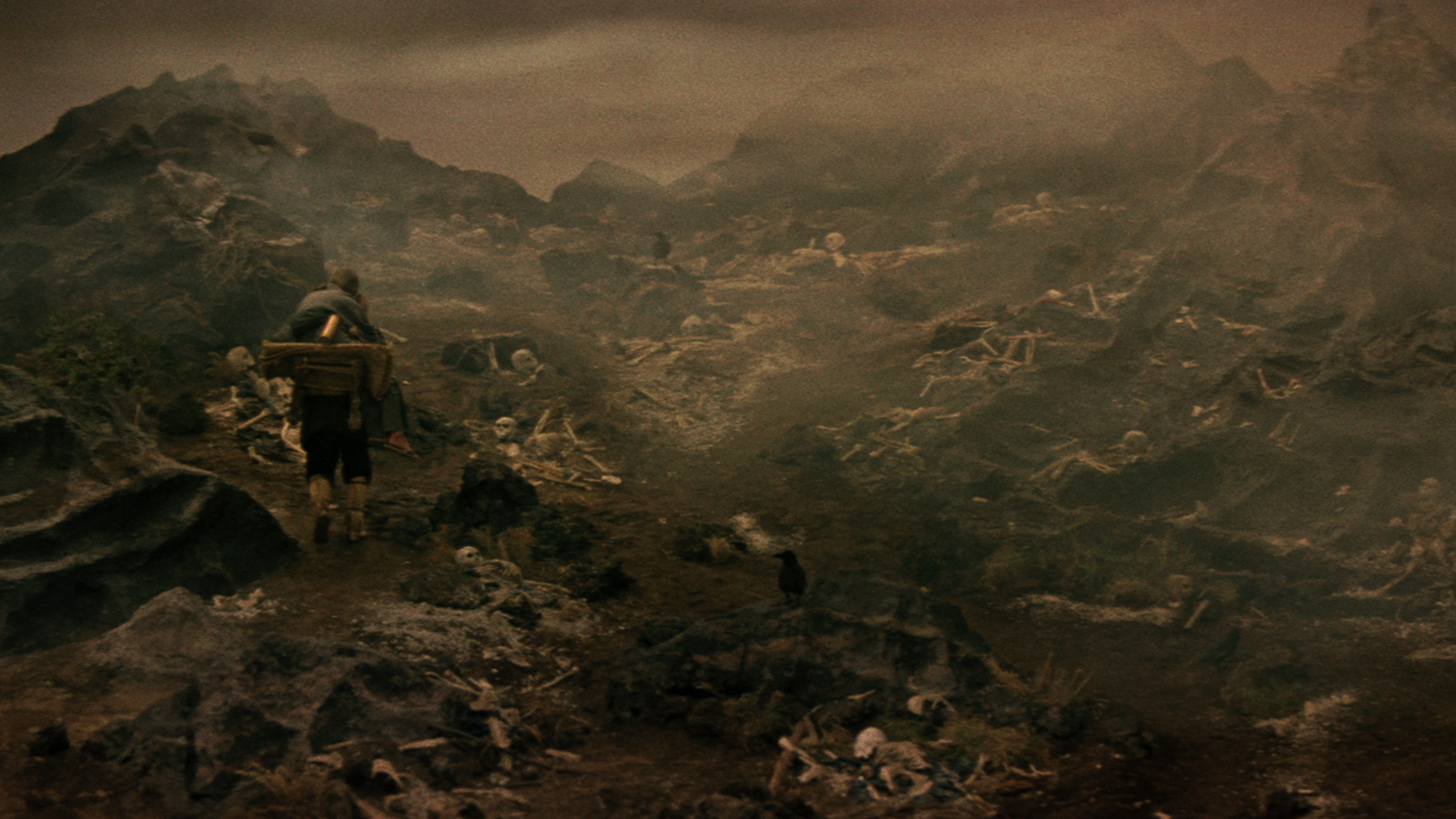 The film’s look and feel are so pervasive that it’s easy to lose sight of the great underlying tragedy. Obasute (referenced in the film’s brief epilogue) is a Japanese legend about the abandonment of the elderly. Kinoshita seeks to flesh out how this might have worked and the impacts it would have had on those in the village who know the aging individual. Watching The Ballad of Narayama, it’s possible to catch glimpses of the story’s power, but the style keeps interfering with the narrative’s progression. In 1983, Shohei Imamura orchestrated a remake that abandoned the kabuki elements and told the story “straight” (as in the source novel). It won the Palme d’Or at Cannes.

For a casual film-goer with no special interest in kabuki or Japanese customs, The Ballad of Narayama has little to offer beyond the uniqueness of its presentation. Those seeking to learn more about the history of Japanese cinema and the influences of stage drama on its development will find value in The Ballad of Narayama. It works on a purely intellectual level, however, and is more useful for study than conventional viewing.