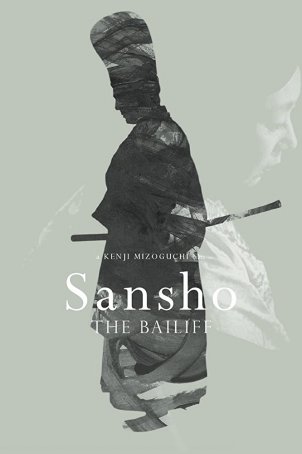 When considering world-famous Japanese filmmakers, the first names that likely come to mind are Kurosawa and Ozu. Not far behind them, however, is Kenji Mizoguchi, whose career spanned more than 30 years beginning with silent films in 1923 and concluding with his 1956 death. During that period, Mizoguchi was arguably more popular than Kurosawa (who was just coming into his own in the 1950s with Rashomon and Seven Samurai) and Ozu (whose period of greatest international exposure didn’t begin until after Mizoguchi’s death). At the Venice Film Festival, his movies were nominated in five consecutive years for the top prize, with three of them – The Life of Oharu, Ugetsu, and Sansho the Bailiff – winning awards.

Mizoguchi based Sansho the Bailiff on a tale from Japanese folklore as told in a 1915 short story by Ogai Mori. Although the written version focused on the title character, Mizoguchi and his screenwriters shifted the perspective from the Bailiff/Steward (as played by Eitaro Shindo in a portrayal of towering villainy) to the two aristocratic children, Zushio (Yoshiaki Hanayagi) and Anju (Kyoko Kagawa), who are wrongfully sold into slavery. Sansho the Bailiff plays like a fable with tragedy and hardships on the road to redemption. The ending, although cathartic, is not saccharine. Instead, it’s bittersweet with a vein of sadness running through an otherwise uplifting moment. The conclusion is so like that of Chaplin’s City Lights that one can’t help but wonder whether Mizoguchi might have been inspired by the classic film (which was released a couple decades earlier) in fashioning Sansho the Bailiff’s final moments. 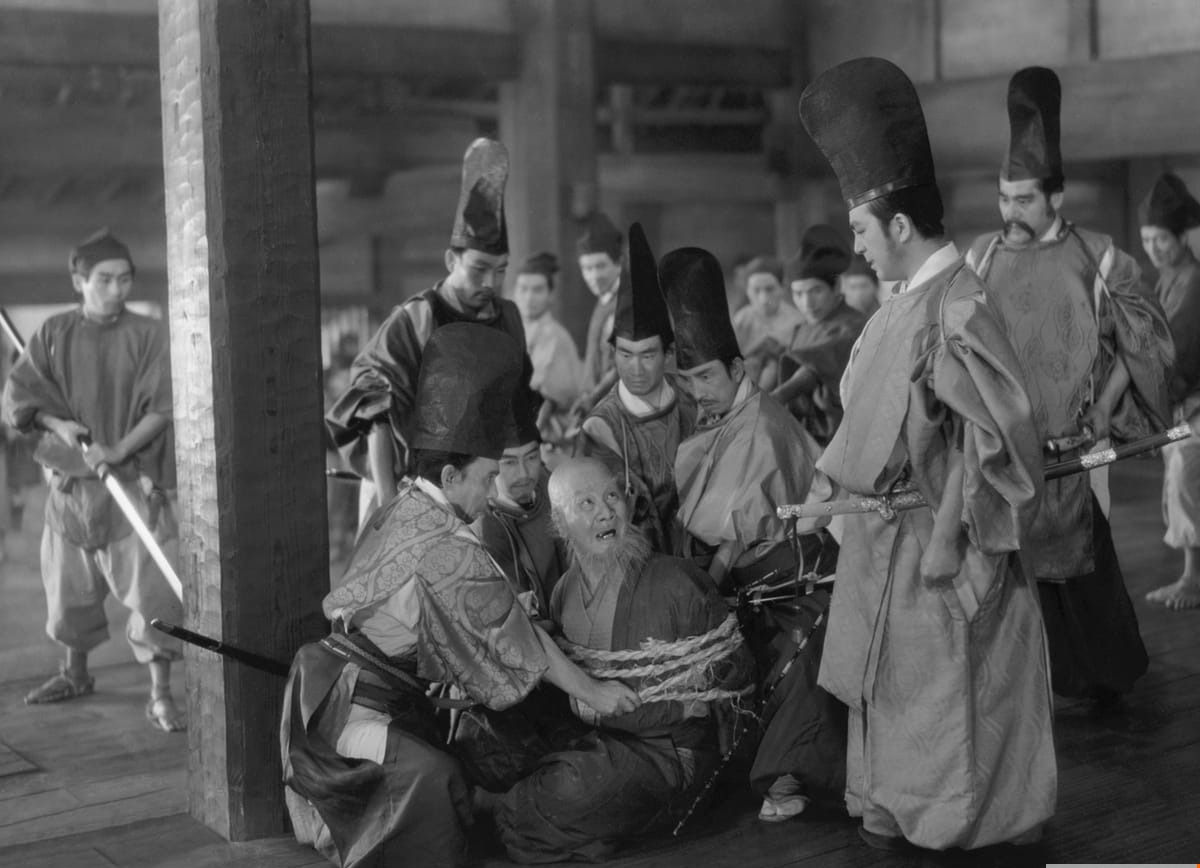 The film transpires during the eleventh century and focuses on the family of a governor who is banished for putting the needs of the people over the wealth of the local lord. The governor’s wife, Tamaki (Kinuyo Tanaka), is forced into prostitution and separated from her children, who are kidnapped and become slaves under the thumb of the titular character. Sansho is a cruel master and Zushio gains favor by meting out punishment to other slaves without pity or mercy. While the boy, who grows into a young man in the slave camp, loses his humanity, his sister retains hers. She holds dear the words of her father: “Without mercy, man is like a beast. Even if you are hard on yourself, be merciful to others.”

Eventually, Anju is able to revive a spark of empathy deep within her brother’s heart. He agrees to escape with her so they can search for their mother. Anju, however, believes that if they go together, they will be caught. She provides a diversion so Zushio can get away. Then, realizing that if she is tortured, she might give away his destination, she commits suicide. Zushio, unaware that she is dead, retraces his roots and appeals to the Chief Advisor in Kyoto, who makes him the new governor of Tango. In that post, he confronts Sansho directly. Once Sansho’s mansion has been burned down and the Bailiff exiled, Zushio resigns in order to search for his mother. The two are reunited; now blind, she recognizes him by tracing the lines of his face using her fingers. 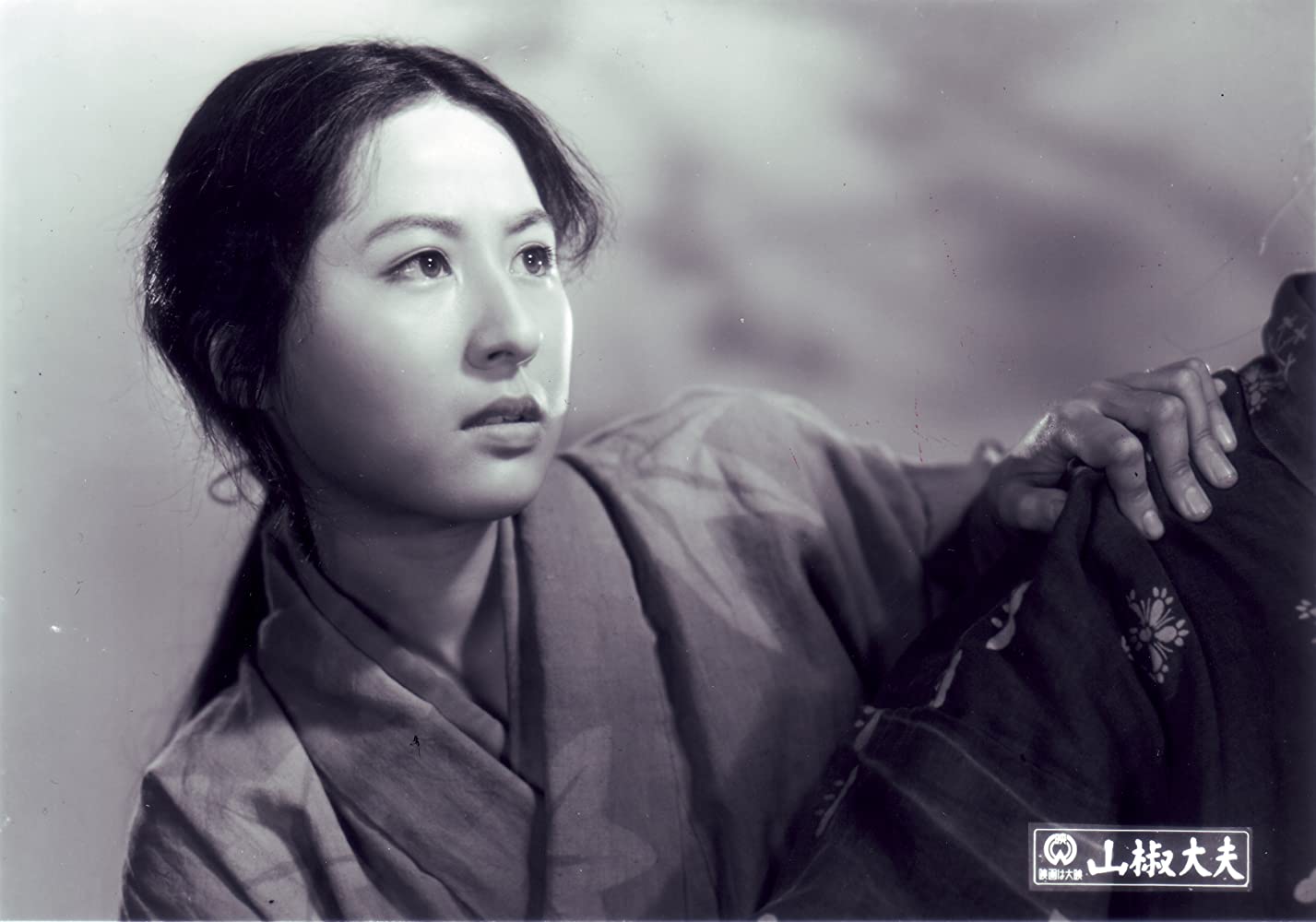 Visually, one of Mizoguchi’s hallmarks is the long, unhurried takes that anchor many scenes throughout the film. Relying on his actors to do their jobs, Mizoguchi gives his cinematographer, Kazuo Miyagawa, the latitude to place the camera in the best position to capture the action without demanding frequent cuts. While it would be disingenuous to argue that editing plays no part in the film’s effectiveness, Sansho the Bailiff comes closer to being assembled “in the can” than in the editing room. Unlike Ozu, who adheres to the same “one scene, one shot” philosophy, Mizoguchi has no compunctions about allowing his camera to move.

Music is a critical element of the film, from the score featuring traditional Japanese instruments to Tamaki’s lament. When we first hear this early in the film, it reveals to the children that their mother is still alive. Late in the proceedings, it allows Zushio to recognize the blind, handicapped crone as the woman for whom he has been searching. 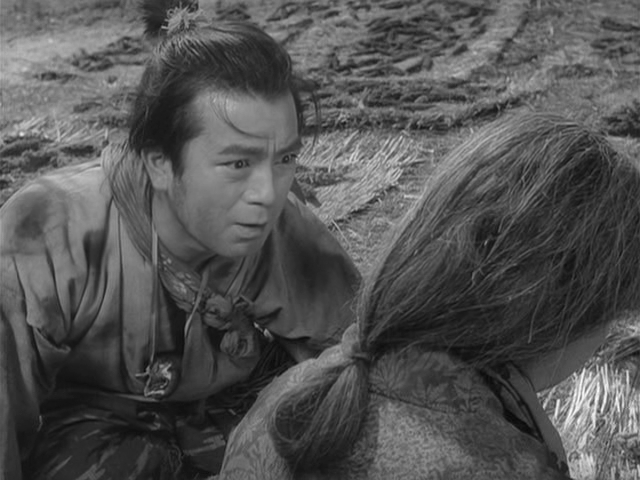 The sweep of the story draws us in and pulls us along. Black-and-white is the most appropriate format for a movie of this nature. Fables and period pieces set in the long-ago past are often enhanced by the lack of color. The manner in which Mizoguchi chose to shoot Sansho the Bailiff and the strong production elements have resulted in a piece of filmmaking that has lost none of its power and effectiveness over the years. Like Kurosawa’s Seven Samurai (which was released in the same year), the visual storytelling allows us to disconnect from our modern-day reality and enter an historical period that is as different from our own as the black-and-white is from color.

The most famous quote provided by any film critic for Sansho the Bailiff came from Anthony Lane, who wrote in a September 2006 retrospective profile of Mizoguchi in The New Yorker that “I have seen Sansho only once, a decade ago, emerging from the cinema a broken man but calm in my conviction that I had never seen anything better; I have not dared watch it again, reluctant to ruin the spell, but also because the human heart was not designed to weather such an ordeal.” Although I don’t agree with Lane that there is nothing “better” out in the wide cinematic landscape than Sansho, there’s no doubting the film’s impact on the emotions. It employs the power of tragedy to enrich. Like in City Lights, there are many facets to the film’s final images. And, although there’s nothing ambiguous about the narrative elements of that conclusion, it’s up to the individual how to process it. That’s the genius of the film and, while others may not react to it with the same sense of quiet devastation that engulfed Lane, a feeling of indifference is unlikely in the extreme.