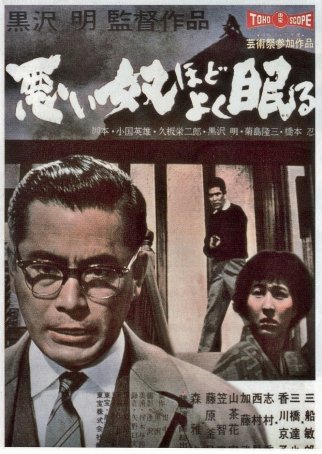 More than twenty years after the deaths of director Akira Kurosawa and actor Toshiro Mifune, the names remain entwined. For nearly two decades, the pair combined to make some of the best Japanese movies to hit the world stage. And, although Kurosawa has at least one challenger (Yasujiro Ozu) for the honorarium of the Best Japanese Filmmaker of All Time, he is widely acknowledged as having fashioned a handful of cinema’s most revered classics. Those include Rashomon, Seven Samurai, Yojimbo, The Hidden Fortress, and Red Beard – all of which star Mifune. However, since the total number of their collaborations is sixteen, there are therefore numerous lesser-known titles to be discovered. One is 1960’s The Bad Sleep Well, a film noir critique of corruption in postwar Japanese business practices that uses elements of Shakespeare’s Hamlet to generate plot points.

Although The Bad Sleep Well isn’t the first or last time Kurosawa borrowed from the Bard, this movie isn’t as obviously derivative as Throne of Blood (Macbeth) or Ran (King Lear). Indeed, it’s possible that a viewer, unaware of the inspiration, might miss it. The film owes as much to American gangster movies of the 1940s and 1950s as it does to Hamlet, with Kurosawa, an admitted admirer of Hollywood’s Golden Age, mining film noir for everything from stylistic elements to the musical score to the character types.

(From this point on, spoilers abound…) 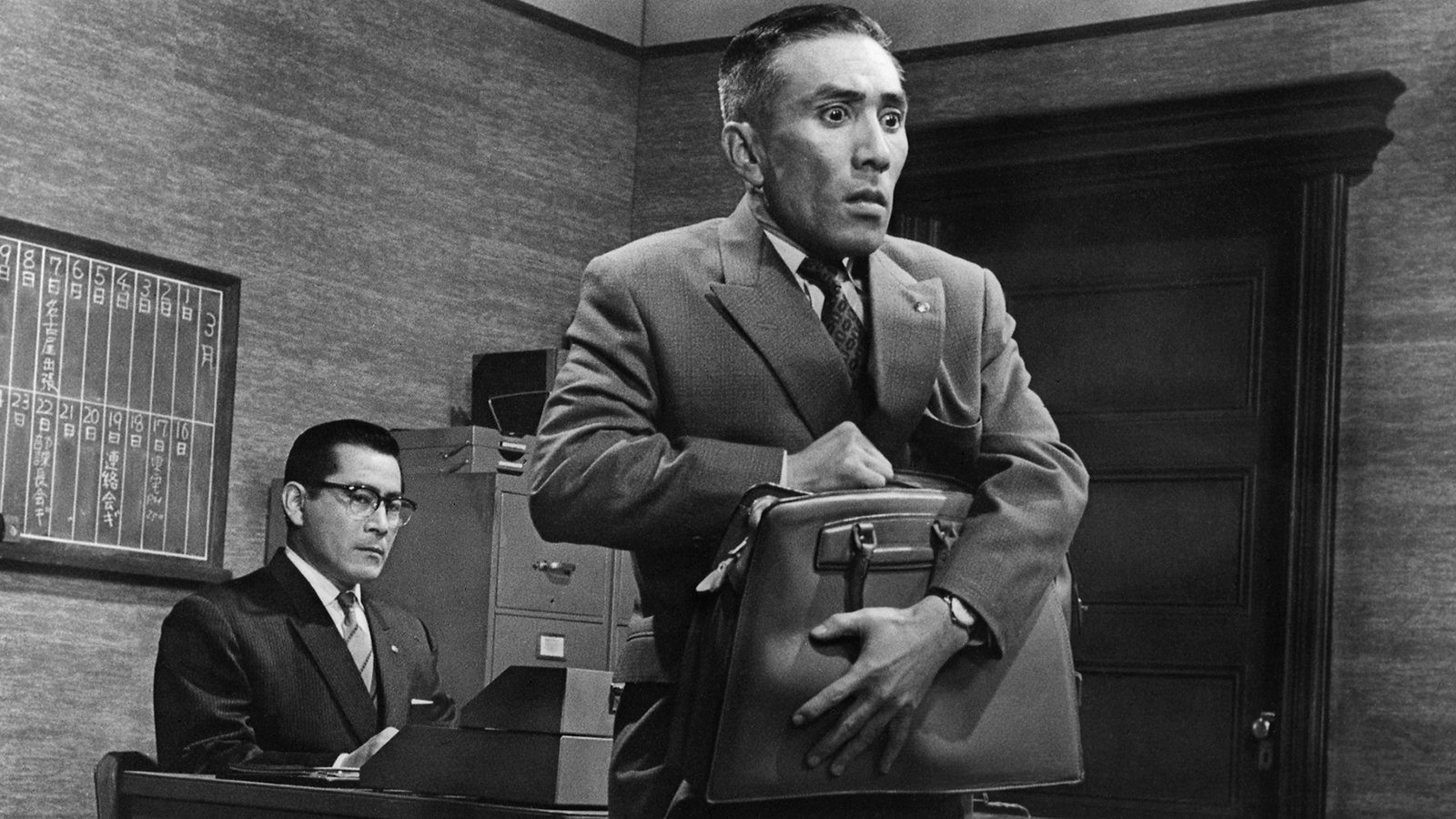 The Bad Sleep Well is one of Kurosawa’s most nihilistic motion pictures. Although the director was never averse to killing his main characters, he never did it in quite the callous, offhand manner in which it happens in this movie. The ending is controversial not because Nishi (Mifune) fails in his scheme to achieve revenge by bringing down a corrupt company but because the tragedy unfolds off-screen. We don’t see it; we’re told about it after the fact. This gives The Bad Sleep Well an anticlimactic, unfinished feel. Those recognizing the Hamlet associations will deduce that Nishi is going to die but even the Prince of Denmark took down his target at the end (along with almost everyone else). In The Bad Sleep Well, Nishi and a few others die but the chief villain, the movie’s version of Claudius, Iwabuchi (Masayuki Mori), emerges relatively unscathed. The concept of the villain’s almost complete victory isn’t the problem, however – it’s necessary to illustrate that more than righteous anger is necessary to bring down a bastion of financial power and corruption. The issue is the presentation of the ending – that’s what prevents The Bad Sleep Well from being mentioned as one of the director’s signature films. Certainly, the preceding 135 minutes are as good as anything else made by Kurosawa. 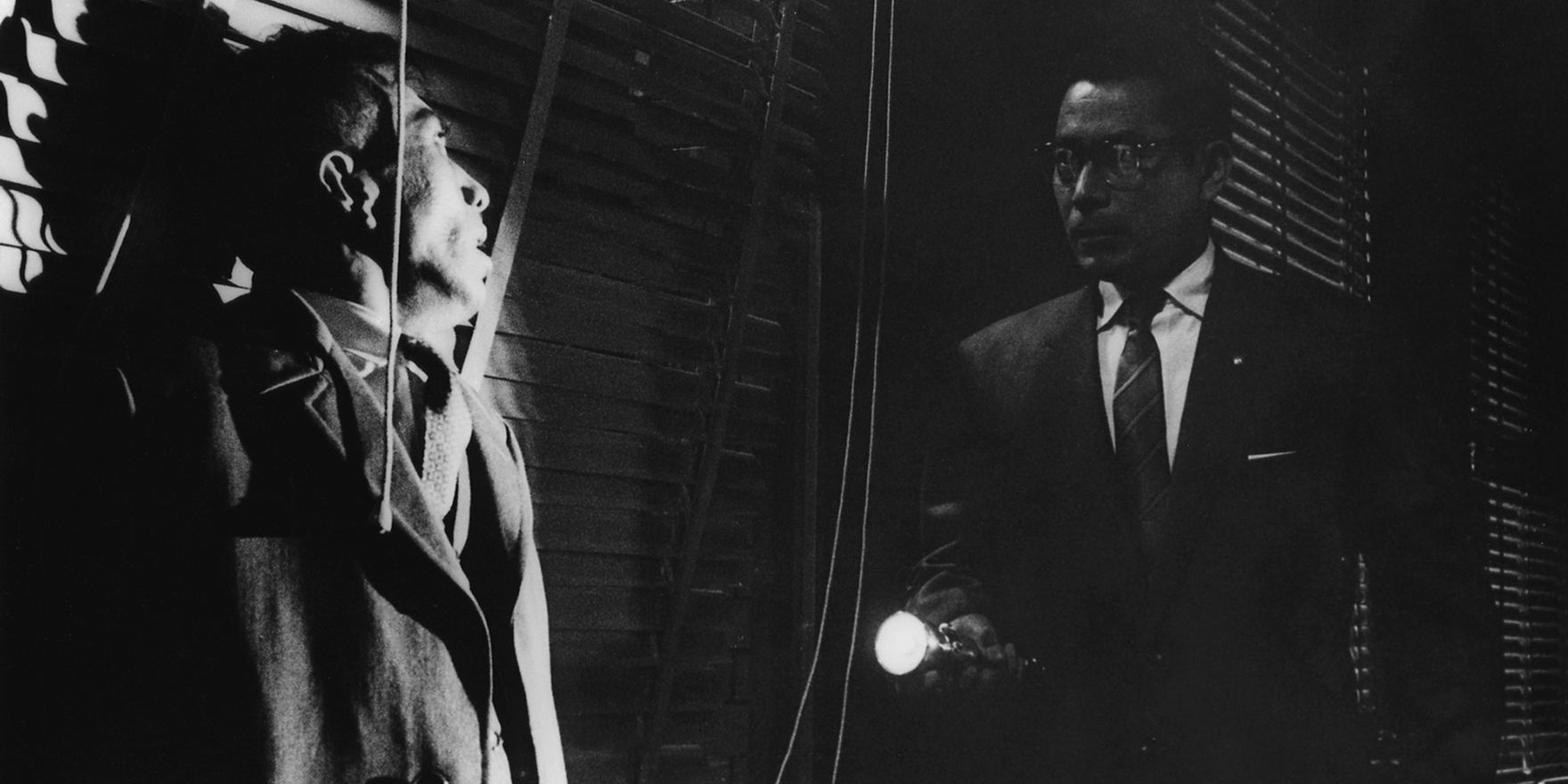 The movie opens with a memorable 20-minute set piece transpiring at the wedding of Nishi to Iwabuchi’s daughter, Yoshiko, (Kyoko Kagawa). The camera glides around the venue, occasionally stopping to eavesdrop on conversations that, taken together, provide background to the story while introducing the characters. They also hint at a dark secret that no one wants to talk about: the suicide of a man five years ago that may not have been the straightforward act of a man throwing himself out a seventh-floor window.

Nishi has worked hard to gain the truth of his boss and new father-in-law. As we learn, however, it’s all a sham. The suicide victim was his father and his goal in marrying Yoshiko is to get close enough to Iwabuchi to orchestrate a masterful takedown. In the end, Nishi is too clever, too arrogant, and not careful enough. Through means of deceit and duplicity, Iwabuchi learns not only about the details of Nishi’s plan but the location of his hideout. On the night before Nishi is about to strike his blow, Iwabuchi outflanks him. He is found dead in his crumpled car, his mission unfulfilled and his reputation sullied.

The Shakespeare allusions are numerous. Nishi is an obvious stand-in for Hamlet. Although his father’s ghost never makes an appearance, another character “rises” from the grave to haunt those who contribute to his death. Yoshiko exhibits some of Ophelia’s characteristics (her love of Nishi results in a mental breakdown). Her brother, Tatsuo (Tatsuya Mihashi), represents Laertes. And Nishi’s close confidante, Itakura (Takeshi Kato), fills Horatio’s role.

Kurosawa’s mastery of the story is evident. The opening sequence is mesmerizing and, for the better part of the next two hours, he ratchets up the suspense in gradual and sometimes unexpected ways. The black-and-white cinematography, shot in a manner where the light and shadow echo that of American films from a decade or two earlier, is perfect for the subject matter. The bleakness of the tone is at times counterbalanced by whimsical elements in Masaru Sato’s musical score.

For those who are accustomed to seeing Toshiro Mifune in full Samurai garb (something he wore quite often when working with Kurosawa), our first exposure to him in a modern suit can be a little disconcerting. For about the first third of the movie, he remains off to the side, seemingly a secondary player in the story of petty officers caught in a scheme of kickbacks. Eventually, however, it becomes evident that Nishi is no mere observer. That’s when Mifune’s larger-than-life personality emerges. Here, he may not be wielding a sword and preparing to defend a village, but he’s still an avenger and a crusader.

Ultimately, the biggest problem with The Bad Sleep Well isn’t how bitterly it all ends for Nishi but that Kurosawa elects to “tell rather than show.” Many viewers may rightfully feel cheated by this, but perhaps that’s Kurosawa’s intention – to shock us by not only killing the main character but by doing it off-screen an in such a sudden, offhand manner. But I’m not sure that’s the best way to end any movie, even one in which darkness and corruption triumph and righteousness is permanently eclipsed.