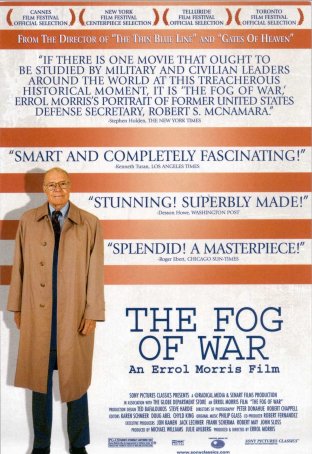 Robert S. McNamara, the Secretary of Defense for John F. Kennedy and Lyndon Johnson, was an observer of and participant in many of the key events of the 20th century. History has not been more kind to him than his critics have been, so McNamara used this opportunity – a 106-minute edit of several interviews given to documentarian Errol Morris – to set the record straight and expound upon his role in firebombing Japan during World War II, the Cuban Missile Crisis, and Vietnam. The product of this collaboration between McNamara and Morris represents an engrossing piece of cinema that may offer a surprise or two to even the most learned scholars of recent American history.

The Fog of War looks at several crucial incidents that occurred during the middle decades of the previous century. Since McNamara's name is often viewed synonymously with the Vietnam War, more than a third of the film is devoted to a detailed explanation of the hows and whys of U.S. involvement. Much of this material is familiar, but some is new (or at least not widely known). Not only do we come to understand McNamara's feelings about the war, but we recognize that he may not have been as responsible as the rumblings of posterity have led us to believe. McNamara doesn't back away from accepting a degree of culpability, but he makes it clear that there were times when he urged the President (in this case, Johnson) to pull out the troops. In fact, the division of opinion between the two men led to McNamara's ouster from his cabinet position in early 1968. He believes that had Kennedy lived events in Vietnam would have been different. It was Kennedy's stated policy that the United States should withdraw from Vietnam by the end of 1965. Instead, under Johnson, the country had committed more than 175,000 men by that date. 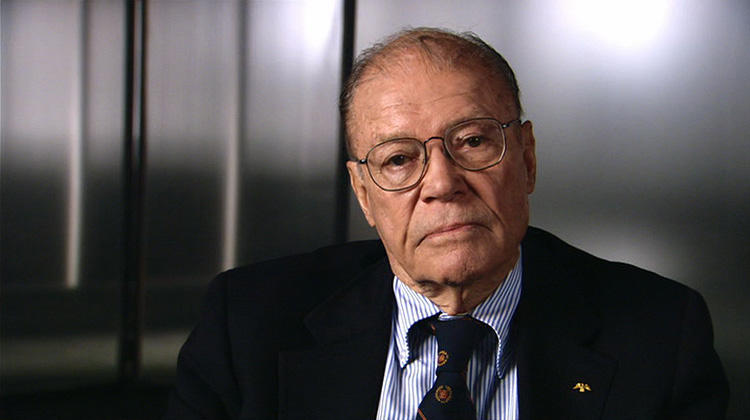 Those who lived through the Cuban Missile Crisis recall it as a period of unparalleled national fear, when the entire world teetered on the brink of nuclear war. The movie Thirteen Days postulates that it was the courage and moral stubbornness of the Kennedys (John and Robert) that resulted in Khrushchev backing down. McNamara tells a more chilling story, indicating that total devastation was closer than many believed (there were, for example, warheads on the ground in Cuba) and that the holocaust was averted by "luck." Had Kennedy not heeded the words of an advisor who urged the president to "empathize" with his enemy, the planet might now be an irradiated cinder.

Long before McNamara became president of Ford motor company or entered the public spotlight, he served in World War II under the unrelenting command of General Curtis LeMay, the commander of the 20th Air Force. In 1945, LeMay was in charge of a massive firebombing offensive in Japan that resulted in the deaths of nearly one million Japanese citizens, including 100,000 in Tokyo during a single night. LeMay's B-29 bombers raked 67 Japanese cities, sometimes killing more than 50% of the population. McNamara points out that, had the United States lost the war, he and LeMay would have been tried as war criminals. But, of course, it's the victors who write the rules and determine what is justified. Nevertheless, it's clear that McNamara wrestled with this issue for decades.

McNamara (who died in 2009, six years after the release of this film) had a reputation for being intelligent and belligerent. The Fog of War validates the former characteristic, but not necessarily the latter. He never loses his temper, although there are several times when he comes close to breaking down (such as when remembering Kennedy's assassination). At the age of 86 (when the film was shot), he was vital and energetic. He speaks candidly about nearly every subject Morris raises, except towards the end of the film, when he refuses to discuss why he did not speak out against the Vietnam war after he left office. 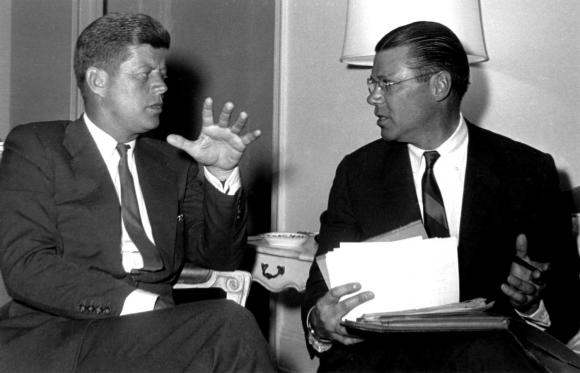 The Fog of War is loosely divided into eleven chapters. Each offers a "lesson" that McNamara learned during his life ("Never say never," "You can't change human nature," "to do good, you may have to commit evil," etc.). If one seeks to find an overarching theme, it's that, even when dealing with intelligent, rational men, the baser parts of our nature often come to the fore. Also that we too often don't learn from our mistakes. Especially on a world level, we repeat them ad nauseam.

By using the so-called Interrotron contraption (defined as "a system of modified Teleprompters [that allow] Morris to project his image on a monitor placed directly over the camera's lens. Interviewees address Morris's image on the monitor while looking directly at the camera, which lets Morris and the audience achieve eye contact with his subjects."), Morris is able to gain a more intimate perspective of McNamara during the lengthy interview segments. Although The Fog of War incorporates archival footage, Oval Office tapes of conversations, and still photographs, most of the movie is McNamara sitting and talking to the camera. Morris has a knack for picking fascinating interview subjects (such Fred Leuchter, the subject of Mr. Death, or the trio of innovators in Fast, Cheap, and Out of Control). McNamara keeps us riveted. No flashy post-production elements are needed. By asking the right questions and guiding the interview into compelling territory, Morris produced one of 2003's most memorable documentaries.