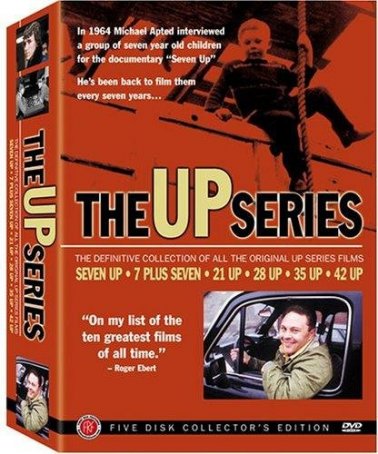 "Give me the child until he is seven and I will give you the man."

Michael Apted's The Up Series is not only documentary filmmaking at its finest, but it is an important sociological study. How many movies can make that claim? Starting in 1964, a group of filmmakers interviewed 14 children, all age seven. Seven years later, they sought out the same 14 children for follow-up interviews. This was repeated when the subjects were 21, 28, 35, and 42. (The latest entry in the series, 49 Up, has already been released overseas and will be released in the United States in October 2006.) As it currently stands, The Up Series spans four decades and represents not only the real-life histories of 14 people, told as things happen, but a microcosm of how the world has changed.

Tony. Suzy. Jackie, Lynn, and Sue. John, Andrew, and Charles. Peter and Neil. Nick. Simon and Paul. Bruce. Ordinary names, ordinary people. Their combined stories unfolding over the years represents an extraordinary viewing experience. We do not know them, yet we do. In a strange way, they have become companions on our journey of life, and we wait for the chance to revisit them every seven years.

They are a diverse group, although the diversity isn't balanced. All these years later, Apted laments that he didn't interview more women (there are four) or non-whites (there is one). The classes are all represented: tough Eastenders, posh public school boys with their educations pre-planned, middle class suburbanites. Although most of the subjects hail from London, there's a rural boy who lives on a farm and a couple of kids from Liverpool. Later in life, one will emigrate to Australia and another will move to the United States. One will spend time in Bangladesh. One will become a homeless nomad. Most, however, will live out their lives close to where they were born.

Seven Up, the first program in the series, was an entry in the Grenada TV public affairs series, World in Action. Its goal was simple: interview 14 children from all walks of life and find out how class influenced their responses and prospects. The documentary, which weighed in at a skinny 39 minutes, was directed by Paul Almond. His chief researcher was an unknown 23-year old named Michael Apted, who was just breaking into television. At the time, this was a one-off special.

It is said that each life is reinvented every seven years, so in 1970 Michael Apted wondered about doing follow-ups with the 14 children he and Almond had previously interviewed. The result was 7 Plus Seven (sometimes called 14 Up, even by Apted), and thus was born the series. Apted has religiously hunted down his subjects every seven years since, and most of them have complied with the recurring interview requests. Apted does not know when the series will end (he currently plans to continue at least through 56 Up). He even hopes that after his death, if enough of the subjects are still alive, someone will pick up the reins so the eventual series will be a complete account of their lives.

The stories told in The Up Series represent a rich cross-section of the human experience and, although this was originally designed as a project with a political point to illustrate (about class), it has become universal. Over the course of the first six films, we become so engrossed in the lives and experiences of the subjects that we often lose sight of the larger picture. This has happened to Apted as well. He has become so close to most of his 14 interviewees that he has stated he can't bear to think about any of them dying and how hard it would be to deal with that death in a future Up movie. (To date, all 14 are still alive.)

The movies are remarkable in another sense. While watching all six gives you the full "experience," such an investment is unnecessary to appreciate what Apted has accomplished. It's possible to watch just one entry in The Up Series and come away with a deep appreciation for the subjects. That's because each film contains not only new interviews, but clips from all of the previous films. In that way, we get to see how the people have matured, both physically and philosophically. Some questions are repeated from segment to segment, and it can be fascinating to see how answers change in some cases and stay the same in others.

Because of his openness and good nature, Tony is one of the favorite subjects. He is also one of The Up Series' most ardent supporters. It's not hard imagining him staying to the end. As a child, Tony dreamed of being a jockey, but he didn't have the talent and had to change the course of his life. He became a cab driver, got married, and raised a family. In 42 Up, he provides one of the most candid moments in the entire series when he confesses his infidelities to the camera with his wife sitting next to him. (One senses she knew about the affairs but not that he was going to talk about them.)

Suzy is another popular subject. She is a reluctant participant, viewing the seven-year interviews as intrusive. Nevertheless, she hasn't missed one, although it wouldn't be surprising to find her absent from a future segment. Between ages 21 and 28, Suzy underwent a remarkable transformation from a nervous, chain-smoking young woman who had no faith in wedlock and didn't want children to a calm, stable married mother. Of all the transformations presented during the course of The Up Series, this is the most dramatic.

Jackie, Lynn, and Sue - three girls from London's East End - are presented together. Jackie and Sue are both single mothers, having married young and subsequently divorced their husbands. Lynn, the most headstrong of the three, has a family and a career. Their interviews are candid and of special note because, other than Suzy, they are the only women to have been followed by Apted's cameras over the years.

The other trio, John, Andrew, and Charles, represents the privileged upper class. When they were interviewed at age seven, their lives were mapped out for them, and it's no surprise that they pretty much followed the path. Andrew is the only one who has stuck with Apted through all the films. Charles departed after 21 Up and has not returned. John missed 28 Up, returned for 35 Up (he wanted to generate public awareness of a charity he was working with), then declined to appear in 42 Up. (I believe he's back again in 49 Up, so maybe he'll return every other film). Of the 14 interviewees, he's the only one who doesn't get along with Apted. His appearance in 35 Up was filmed by the director's assistant.

Simon and Paul were two boys living in a boy's home when Apted found them for 7 Up. Since then, circumstances have taken them to different places. Paul emigrated to Australia and has lived there for 40 years. He has a wife and children. Simon, the series' only minority (he's dark-skinned), has gone through a divorce and a re-marriage. He skipped 35 Up, but returned for 42 Up, and appeared eager to resume his interviews. (His new wife apparently supports the project while his first wife did not.)

Neil and Peter were middle class boys living in Liverpool. Peter disappeared after comments he made in 28 Up caused him to lose his job as a teacher. Neil became a homeless vagabond squatting in unused flats and wandering the U.K. His life hit bottom in 35 Up, when he espoused a bleak outlook, but he had pulled his life together by 42 Up and appeared on his way to better things. Because of his hardships, Neil's story is one of The Up Series' most consistently compelling.

Nick is the farm boy who, at the age of seven, famously refused to answer a question about whether he had a girlfriend. ("I don't answer those kinds of questions.") Nick went to university to study physics and eventually moved to the United States to teach. He married a fellow Brit, who appeared in 28 Up, then refused future requests for interviews because she felt she was unfairly portrayed. Nick is enthusiastic about the project, but has placed his wife and son out-of-bounds to Apted's camera.

Finally, there's Bruce, a quiet boy who became a teacher and went to places like Bangladesh to do what he could for the people there. By 42 Up, Bruce was back in England and had given up his bachelor's ways. He had also formed a friendship with Neil. This marked the only instance in which two people who met through the films maintained a consistent contact with one another.

Writing about the films and their participants doesn't do the experience of sitting through them justice. This is real human drama, not the made-up kind, and although it might sound dry to read about, it isn't to watch. Two hours with these people moves quickly, in large part because Apted only has about 10 minutes to spend with each of them, and that includes lengthy recaps of where they came from. Editing these films is a monumental job because the right clips have to be chosen from an immense amount of past footage. (Since 42 Up, Apted has gotten everything computer indexed, making the job a lot easier.)

The worldwide popularity of The Up Series (which didn't come to North America until 28 Up) has spawned a number of "companion pieces" from across the globe. Apted is involved with some of them (in an executive producer capacity). Others are done independently. The American version is now in its third iteration (the subjects are 21). There's also a Russian and South African one. It remains to be seen whether any of these will have the success and longevity of their older sibling.

The Up Series is a chronicle of 14 individuals coping with experiences that will resonate with everyone in the audience: youth, puberty, unrealized dreams, marriage, children, divorce, the death of parents, and mortality. One of the reasons these films speak so loudly to so many who have viewed them is that they cause the viewer to examine his or her own life. Watching The Up Series may be as close as we can get to time travel. There's nothing flashy about these films. Apted never tries to show off or insert himself into the action. This is just pure human drama, and one of the most remarkable film projects ever embarked upon any time, anywhere.