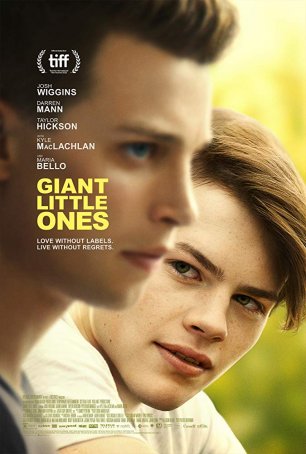 There’s something enormously refreshing about the openness and honesty found in Keith Behrman’s coming-of-age film, Giant Little Ones. It recognizes that for many people, discovering a sexual identity isn’t as simple as recognizing an attraction to one gender or the other. The Kinsey spectrum identifies a wide range of sexual orientations and, for those who don’t fit neatly into the predominantly heterosexual category, sexual discovery, especially during the teen years, can be fraught with pain, angst, and confusion. Many Hollywood films neuter these feelings to make for a more palatable movie experience. Giant Little Ones, however, allows some of the rawness to make it to the screen. Behrman’s screenplay acknowledges the fluidity of gender identity. It explores the confusion experienced by those whose sexuality doesn’t fit neatly into boxes labeled “hetero” or “homo.” And it Illustrates the self-loathing that can arise when one’s sexuality doesn’t match societal norms and the ostracization that can occur even in a seemingly “progressive” culture.

The film’s pivotal event occurs on the night of a 17th birthday. Before the party, the sleepover, and its aftermath, Giant Little One takes a little time to introduce the characters. There’s Franky (Josh Wiggins), one of the stars of the high school swim team, who isn’t quite as attracted to his girlfriend, Priscilla (Hailey Kittle), as he thinks he should be. That doesn’t stop him from planning to lose his virginity to her after the party. Franky’s best friend since childhood, Ballas (Darren Mann), is also on the swim team, and has more sexual experience than Franky. He and his girlfriend have sex regularly and, every time it happens, he makes sure that Franky knows. Franky used to be close to Ballas’ sister, Natasha (Taylor Hickson), but a past event severed their relationship. Franky’s tentative attempts to rebuilt a bridge are coldly rebuffed by Natasha, whose status as a school pariah is only one of the demons she faces. Franky’s home life is unsettled. He lives with his single mom, Carly (Maria Bello), and older sister, Deanne (Olivia Scriven), but the absence of his father, Ray (Kyle MacLachlan), is a sore spot the young man. His resentment seems out-of-proportion for the infraction: Ray left Carly after falling in love with another man. His ex-wife and daughter have forgiven him and “normalized” relations but Franky barely acknowledges Ray’s existence.

Then comes Franky’s 17th birthday. The expected sexual encounter isn’t with Priscilla, however – her parents demand that she comes home by curfew. Instead, a drunken Franky and Ballas share the covers… and more. Behrman’s record of their encounter is low-key – all the camera captures is the movement of sheets and the groans of the participants – but it’s obvious something sexual is happening. In the sober light of day, Franky feels weird about the encounter but is able to deal with it. Ballas, however, an alpha-male type who can’t even consider the possibility of having homosexual tendencies, blames his friend and cuts Franky out of his life. 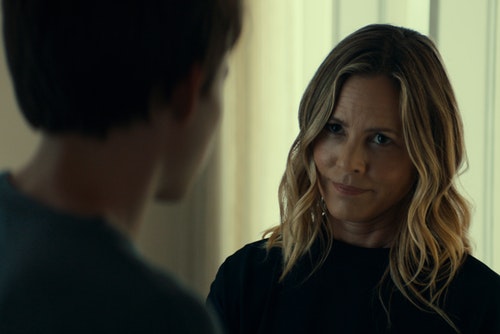 With the exception of Mouse (Niamh Wilson), Franky’s too-cool-to-be-authentic lesbian pal, everyone in Giant Little Ones is relatable. None of these people – not even the adults – have things figured out. Franky is confused but trying to cope, Ballas is hostile and takes his rage out on everyone around him, and Natasha is damaged from an unrelated encounter. (The nature of her injury is revealed over the course of the film.) Behrman shows compassion in bringing these individuals to the screen and he’s helped by three talented (and relatively unknown) young actors: Josh Wiggins, Darren Mann, and Taylor Hickson. Wiggins has the biggest story arc but Hickson is the standout.

Most coming-of-age stories that address teenage sexuality feel that it’s necessary to apply black-and-white definitions, as if gay people never have relationships with members of the opposite sex or straight men and women never “experiment” with same-sex interactions. Giant Little Ones is rare in that it plunges into this messy arena without feeling the need to label. And, although the movie ends on an upbeat note (one that’s a little off-key in its optimism), it doesn’t “resolve” the questions of anyone’s sexual orientation. As in real life, that’s something that can’t be determined in the space of a few weeks and Giant Little Ones has the intelligence and sensitivity not to try.