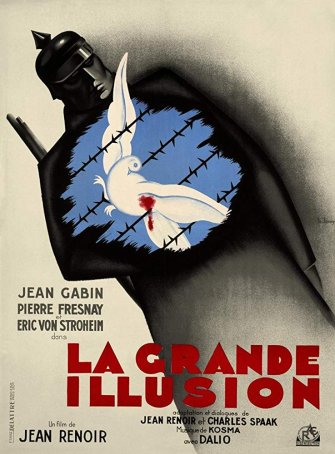 Grand Illusion looks back on the 20th century’s first global conflict from the perspective of a world on the brink of an even greater war. This film, which was cited by Joseph Goebbels as “Cinematic Public Enemy No. 1” when he sought to have all the prints confiscated and destroyed, paints a bleak picture of the morality of war. Over the years, there has been some debate about the meaning of the title but it could refer to the justifications – any justifications – for war. The Great War was supposed to be “the war to end all wars,” but it was nothing of the sort. Late in the film, a woman reveals that her husband and brothers were killed in battles deemed to be great victories for Germany, yet those triumphs for her country represented personal tragedies for her. Victory in war: The Grand Illusion?

This is not intended as propaganda in the way that some anti-war movies are. In addition to presenting a flavor of the pointlessness of war, it offers commentary about the diminution of Europe’s class system. World War I would be the last of the “aristocratic” wars. However, as history informs us a century later, the newfound power of the working man did nothing to limit humankind’s darker impulses. Hitler and the Nazis made the Kaiser seem mild by comparison.

Grand Illusion is about war but it doesn’t feature any battles. It opens by introducing two French officers, Lieutenant Marechal (Jean Gabin) and Captain de Boeldieu (Pierre Fresnay), who have been shot down over Germany by the famed flying ace, Major von Rauffenstein (Erich von Stroheim). He treats his prisoners like guests, especially de Boeldieu, who is a fellow aristocrat. The connection between de Boeldieu and von Rauffenstein at times seems stronger than the one between the captain and Marechal – a reflection of the importance of class in the dying “old order.” Writer/director Jean Renoir (the celebrated painter’s son) offers a deeply humanistic perspective of those on both sides of the conflict, reminding viewers that those bearing the label of “enemy” are as human as those categorized as “allies.” 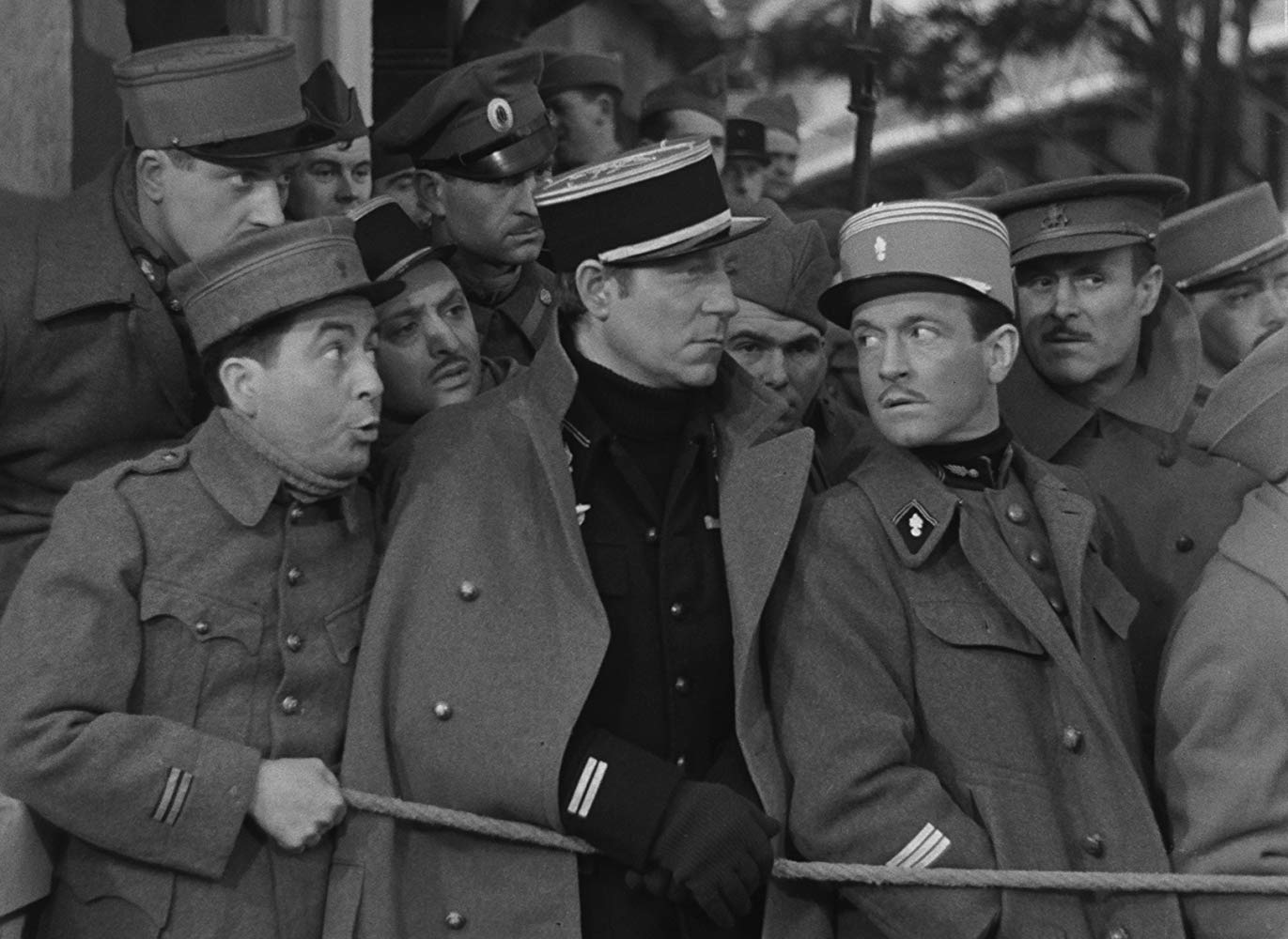 There are two major locations for Grand Illusion, which covers a span of slightly less than two years. In the first POW camp, de Boeldieu and Marechal join a group of fellow prisoners in digging a tunnel that, when completed, should allow them to emerge beyond the fence and escape into the German countryside. (The digging sequences would influence John Sturges when he made The Great Escape in 1963.) While in this location, the two newcomers meet Lt. Rosenthal (Marcel Dalio), who is already there when they arrive. A member of a family of wealthy Jewish bankers (the “nouveau riche”), Rosenthal generously shares packages of food sent to him, allowing the prisoners to eat varied meals instead of the standard fare of indigestible, overcooked cabbage. There’s a talent show and a memorable scene when the prisoners offer an impromptu rendition of “Marseilles” following a French military victory (which may have inspired a similar moment in Casablanca). This results in Marechal being thrown into solitary confinement, where a kind guard gives him a harmonica to help pass the long, lonely hours. On the eve of the tunnel’s completion, the camp is re-organized with de Boeldieu and Marechel being shipped elsewhere.

Following a short montage indicating the passage of time, we catch up with the two main characters more than a year later. Because of numerous (failed) escape attempts, they have been assigned to the escape-proof fortress of Wintersborn, which is commanded by von Rauffenstein, who has been grounded due to numerous injuries. They are reunited with Rosenthal, who is also at Wintersborn. Von Rauffenstein spends time conversing with de Boeldieu, unaware that the latter is planning a daring escape that will require him to sacrifice himself in order to win his companions’ bid for freedom. De Boeldieu is shot but his actions allow Marechal and Rosenthal to begin a long, arduous trek toward Switzerland. Along the way, they find rest and warmth in the house of a German widow (Dita Parlo), who welcomes the companionship – even it is from “the enemy.” Although Grand Illusion is mostly dialogue-driven, the sequence in which the two Frenchmen escape from Wintersborn represents a well-executed exercise in tension and suspense. Renoir films it simply and cleanly, never leaving in doubt what the situation is. This is followed by the most affecting scene as von Rauffenstein stands a death-watch at de Boeldieu’s bed. The French captain’s last moments echo the passing of an era – one emphasized by his dying words: “For a commoner, dying in a war is a tragedy. But for you and I – it’s a good way out.”

The film’s acting is top-notch, even when viewed under the microscope of today’s standards. There’s none of the over-the-top approach that was sometimes evident in films released within a decade of the advent of the first talkies. Jean Gabin’s strong-yet-sensitive approach to the Working Man stereotype established a standard that would later be refined by one of France’s best-known actors, Yves Montand. Pierre Fresnay imbues de Boeldieu with an aristocratic flair that never becomes openly comedic (although it sometimes treads the line). Without a doubt, the most famous performance in Grand Illusion belongs to the great silent film director Erich von Stroheim whose tormented, nuanced portrayal crafted a villain for all ages. His scene with a geranium offers a moment of heartbreak. Grand Illusion was never a “lost” film in the sense that many classics of its era were lost. However, from the onset of World War II until the late 1950s, it was unavailable. In 1958, Renoir embarked on a reclamation project, reconstructing the picture using the best available elements. The result was less than ideal but at least provided audiences with an opportunity to see the movie. Then, in 1998, roughly 60 years after the movie’s North American debut, the original camera negative was recovered, allowing Janus Films to fully restore the film. This pristine version of Grand Illusion received a brief theatrical re-release before becoming one of the centerpieces of Criterion’s early DVD line.

When reviewing older movies, I often remark that many of their contemporaneous strengths have been diminished by the passage of time. That isn’t the case with Grand Illusion. Renoir’s vision, themes, and implementation are as strong today as when he committed them to celluloid more than 80 years ago. The film remains relevant and will continue to be so for as long as human nature stays immutable.