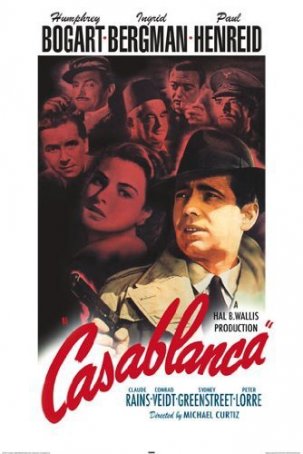 It's probably no stretch to say that Casablanca, arguably America's best-loved movie, has had more words written about it than any other motion picture. Over the years since its 1943 release, the legends and rumors surrounding the making of the film have generated almost as much attention as the finished product. Some of the best-known and most often repeated anecdotes include producer Hal B. Wallis' near-casting of Ronald Reagan and Ann Sheridan as Rick and Ilsa, the existence of two scripts for the last day of shooting (one version had the ending as filmed; the other, unproduced version kept Rick and Ilsa together), and the reported backstage tension between several of the principal actors.

Ultimately, however, while it's fascinating to examine and dissect all that went into the making of Casablanca, the greatest pleasure anyone can derive from this movie comes through simply watching it. Aside from some basic knowledge of recent world history, little background is needed to appreciate the strength and power of the film. Casablanca accomplishes that which only a truly great film can: enveloping the viewer in the story, forging an unbreakable link with the characters, and only letting go with the end credits.

Unlike many films that later became classics, Casablanca was popular in its day, although a cadre of officials at Warner Brothers were convinced that it would be a box-office failure. The movie earned 8 Academy Award nominations, leading to three Oscars (Best Screenplay, Best Director, and Best Picture). The picture went on to have a long, healthy life in re-releases, television, and (eventually) video. It contains a slew of recognizable lines ("Here's looking at you, kid", "Of all the gin joints in all the towns in all the world, she walks into mine", "Round up the usual suspects", "Louis, I think this is the beginning of a beautiful friendship", "We'll always have Paris", "The problems of three little people don't amount to a hill of beans in this crazy world"). Ironically, however, the best-known bit of dialogue from Casablanca, "Play it again, Sam," isn't even in the movie. Like Captain Kirk's "Beam me up, Scotty," it's an apocryphal line. The closest the movie gets is either "Play it" or "Play 'As Time Goes By.'"

The first time I saw Casablanca, I remember remarking how "modern" it seemed. While many movies from the '30s and '40s appear horribly dated when viewed today, Casablanca stands up markedly well. The themes of valor, sacrifice, and heroism still ring true. The dialogue has lost none of its wit or cleverness. The atmosphere (enhanced by the sterling black-and-white cinematography), that of encroaching gloom, is as palpable as ever. And the characters are still as perfectly-acted and three-dimensional as they were more than fifty years ago.

Just about everyone knows the story, which takes place about a year after the Germans invaded France. Ilsa (Ingrid Bergman) and her husband, Czech freedom fighter Victor Laszlo (Paul Henreid), wander into Rick's Cafe in Casablanca. The two are on the run from the Nazis, and have come to the American-owned nightspot to lie low. But the German-controlled local government, headed by Captain Louis Renault (Claude Rains), is on the move, and Laszlo has to act quickly to get the letters of transit he came for, then escape. Little does Ilsa know that the cafe is run by Rick Blaine (Humphrey Bogart), the one true love of her life. When the two see each other, sparks fly, and memories of an enchanted time in Paris come flooding back.

Bogart and Bergman. When anyone mentions Casablanca, these are the two names that come to mind. The actors are both so perfectly cast, and create such a palpable level of romantic tension, that it's impossible to envision anyone else in their parts (and inconceivable to consider that they possibly weren't the producer's first choices). Bogart is at his best here as the tough cynic who hides a broken heart beneath a fractured layer of sarcasm. Ilsa's arrival in Casablanca rips open the fissures in Rick's shield, revealing a complex personality that demands Bogart's full range of acting. As Ilsa, Bergman lights up the screen. What man in the audience wouldn't give up everything to run away with her?

Less known is Paul Henreid, a romantic lead who was on loan to Warner Brothers for this project. Most viewers know Henreid as "the other guy" in the romantic triangle, and, while his performance isn't on the same level as that of his better-known co-stars, Henreid nevertheless does a respectable job. Casablanca features some other well-known faces. Conrad Veidt plays the Nazi commander on Laszlo's trail, Peter Lorre is the man who steals the letters of transit, and Sydney Greenstreet is the city's black market overlord. But the best performance in the film belongs to Claude Rains, who is magnificent. Bogart and Bergman are great, but Rains is better. This is the top role in an impressive career, and it's a shame that the actor didn't win the Best Supporting Oscar for which he was deservedly nominated. Rains is a standout in nearly his every scene, but, like the consummate professional, he constantly cedes the spotlight to the higher-profile star.

Another curious thing about Casablanca is that hardly anyone ever talks about the director. It isn't as if Michael Curtiz is a journeyman hack who got lucky here. From the '20s to the '50s, Curtiz was one of the hardest working directors in Hollywood, helming over 100 films including White Christmas, Mildred Pierce, and Yankee Doodle Dandy. (Before that, he made nearly 50 movies in Europe, where he began his career in 1912.) Curtiz was a well-respected film maker and his work on Casablanca was first rate, but, for some reason, few non-cineastes associate his name with this picture.

It's not much of a stretch to say that Hollywood doesn't make movies like this any more, because the bittersweet ending has gone the way of black-and-white cinematography. If Casablanca was made in today's climate, Rick and Ilsa would escape on the plane after avoiding a hail of gunfire (Rick would probably be doing the two-fisted gun thing that John Woo loves). There would be no beautiful friendship between Louis and Rick. Who knows what would have happened to Victor Laszlo, but he wouldn't have gotten the girl. One of the things that makes Casablanca unique is that it stays true to itself without giving in to commonly held perceptions of crowd-pleasing tactics. And because of this, not despite it, Casablanca has become known as one of the greatest movies ever made. Maybe the modern generation of screenwriters should consider this before they tack on the obligatory "happily ever after" ending.

From time-to-time, someone tries to remake the film, but even the best re-tread has been less than a pale shadow of the original. The most recent serious attempt was Havana, Sydney Pollack's ill-advised misfire (incidentally, the word "serious" rules out Barb Wire). Despite a good cast (Robert Redford, Lena Olin, Raul Julia) and a change in venue, this is clearly an updated Casablanca, and Casablanca isn't Casablanca without Bogart and Bergman. So, although just about everyone involved with this legendary motion picture has departed this life, the film itself has withstood the test of more than a half-century to rise, like cream, to the top. One can only imagine that, in another fifty years, its position in the hierarchy of all-time greats will be even higher.