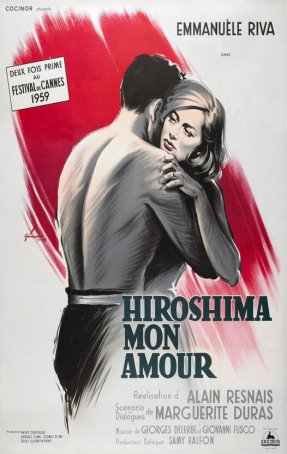 Although director Alain Resnais was never a card-carrying member of the French New Wave, his films influenced those who were (in particular, Godard, Truffaut, and Rohmer). Stylistically and thematically, Hiroshima Mon Amour remains one of the most often cited precursors to the flood of European films that changed how movies were made around the globe in the pre-blockbuster era. However, despite exhibiting masterful editing and featuring a deep-rooted sense of poignancy, Hiroshima Mon Amour suffers from moments of extreme melodrama and histrionics. The film’s emotional impact is at times undercut by its tendency to treat its characters more as props than people.

The film transpires over a 36-hour long period in Hiroshima and follows the interactions between a nameless French actress (played by Emmanuelle Riva) and an equally anonymous Japanese architect (Eiji Okada). Their conversations come at the end of a brief, passionate affair. Following a quasi-documentary prologue that explores the lingering effects of the 1945 bomb, Hiroshima Mon Amour provides detailed background about the woman’s wartime liaison with an occupying German officer and the trauma that resulted from its discovery. The story is presented primarily from her perspective; her Japanese lover is in many ways an observer as she struggles to reconcile the past with the present. Both characters express regret that, in the future, their memories of their time together will blur and fade, just as the woman’s remembrances of her German lover have receded into the collage of her past.

Although the film is primarily about memory, separation, loss, and the riddle of time’s passage, it has a definite political perspective. Partially filmed in Japan only 14 years after the bombings of Hiroshima and Nagasaki, the wounds, like the landscape, were still raw and barely scabbed over. While Hiroshima Mon Amour isn’t interested in debating the decision to drop the bomb, there is unconcealed disapproval of its human toll. The documentary elements illustrate the lingering impacts on the population – long-term effects of radiation sickness and people coping with devastating injuries. At the time of its release, this subject matter was deemed too sensitive to allow the movie to be shown in competition at the Cannes Film Festival. 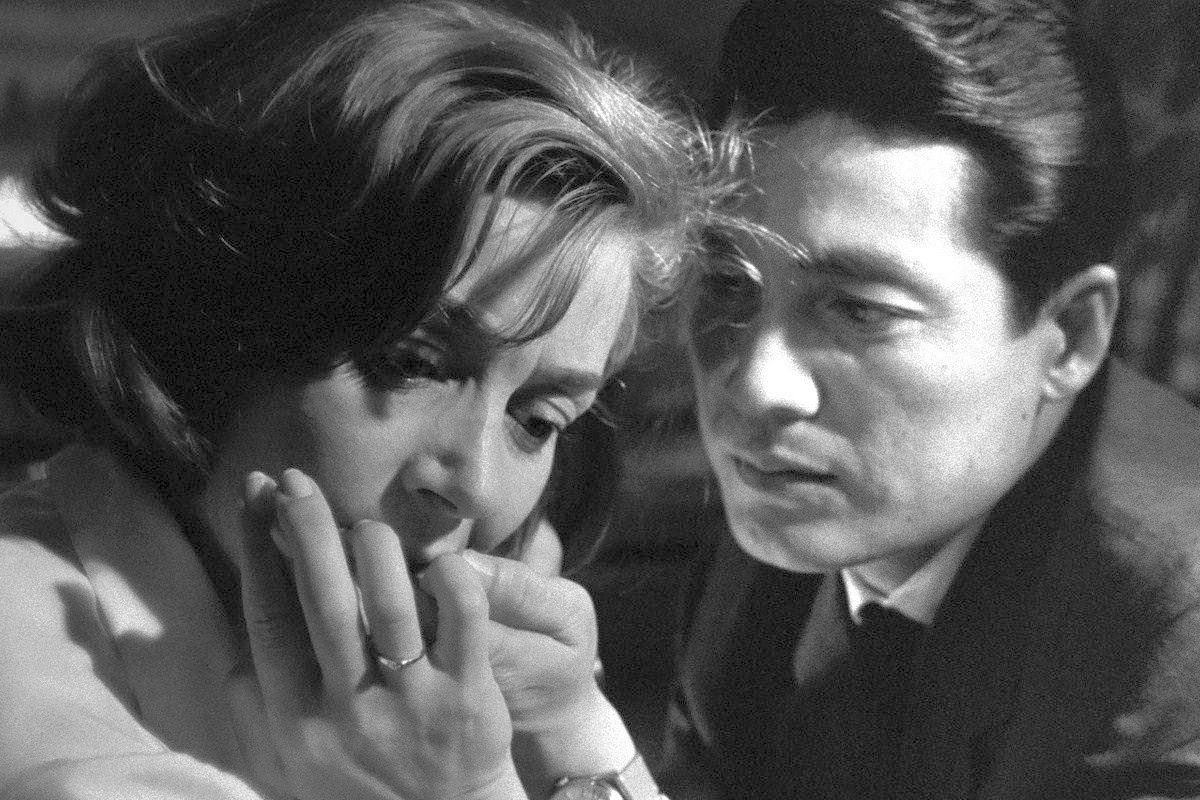 Prior to making Hiroshima Mon Amour, Resnais was a noted documentarian, having made more than 20 short films covering a variety of subjects. The most notable of these (and the one to have been most widely seen) was 1955’s Night and Fog, about the death camps at Auschwitz and Majdanek. The genesis of Hiroshima Mon Amour was a commission to make a documentary about the atomic bomb. Finding the task of crafting a film about Hiroshima to be difficult (if not impossible), Resnais opted instead to make a feature. To that end, he courted Marguerite Duras to write the screenplay. The director’s background as a documentarian is one reason why the most compelling portion of the film is the first act, where the characters fade into the background and allow the reality of Hiroshima – still recovering a decade-and-a-half after Little Boy – to come to the fore without the clutter of the narrative getting in the way.

Once the documentary aspects of Hiroshima Mon Amour are past, Resnais attempts the difficult task of taking us into the psyche of the female protagonist. It’s a tricky thing to invade her memories and understand the fragility of her current situation and there’s something cold about this process. It’s artistic and provides an opportunity for the viewer to muse along with Resnais about things like time and memory but, as is often the case with intellectually rich films, the emotional component gets lost along the way. Certainly, there’s a tragedy surrounding the Riva character but how well is it conveyed? I was arrested by the way in which the film was shot and what it was saying, but I’ll admit to not caring much about the two people at the center of Resnais’ drama.

With its non-chronological structure, Hiroshima Mon Amour opened up the viability of non-linear storytelling to members of the French New Wave – an approach many latched onto because it took film in a different direction than the A-to-B-to-C progression that Hollywood favored. Resnais not only impacted his contemporaries – those making films in the 1960s – but generations of future filmmakers. It would be difficult, for example, to watch Richard Linklater’s Before Sunrise and not at least think about similarities between that love story and the one Resnais committed to the screen more than 30 years earlier. 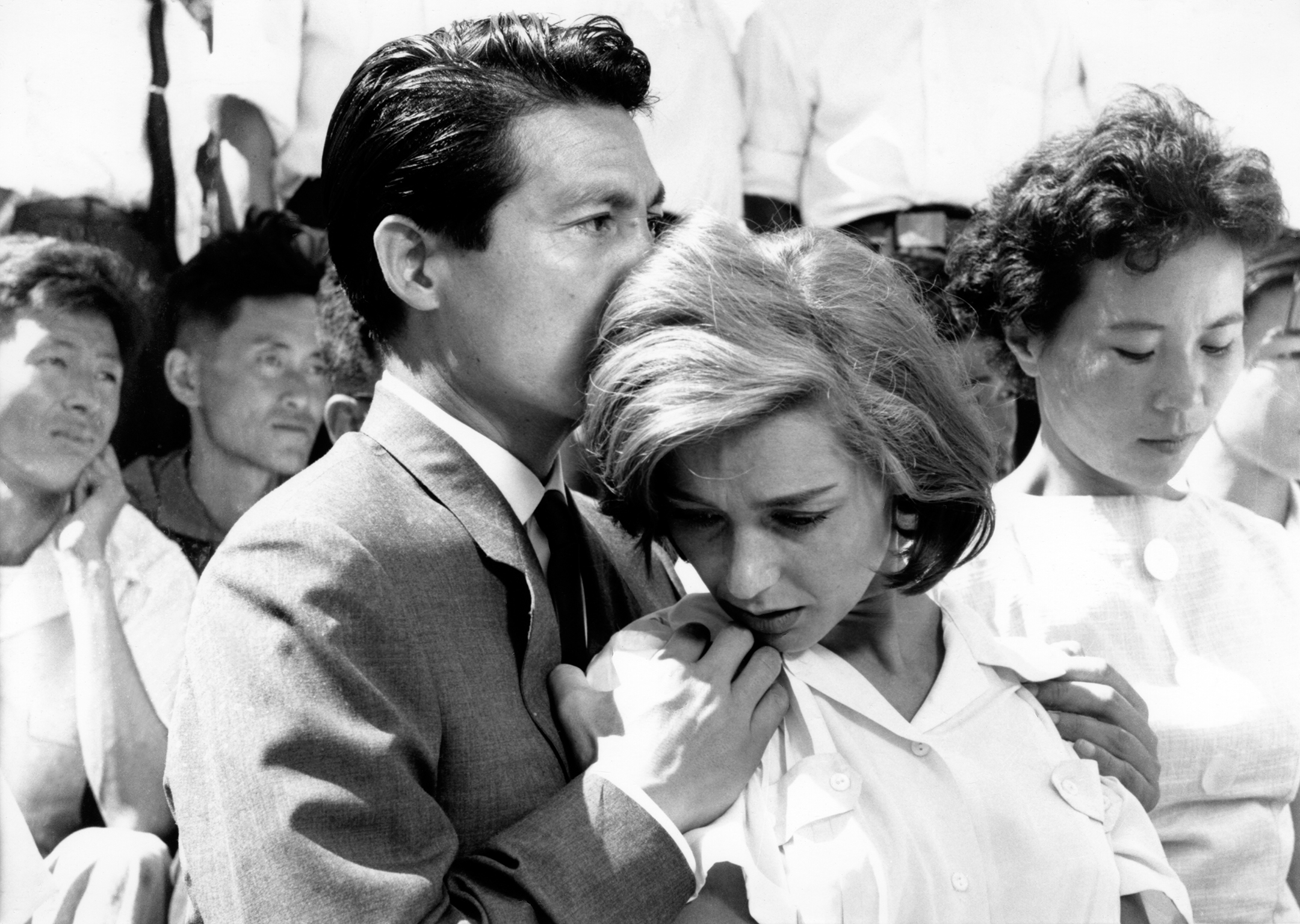 Hiroshima Mon Amour represents the start of Emmanuelle Riva’s film career. (That may in part explain the unevenness of her performance – there are scenes in which her histrionics are jarring.) She would go on to have a long and lauded career, although the majority of her roles were in French movies; she never felt the need to “expand” her audience by appearing in a Hollywood vehicle. (Riva, in fact, was one of only a few ’60s French actresses who didn’t at least dip a toe into the American film market.) The closest she ever got was appearing in Michael Haneke’s Amour, which (although by no means “mainstream”) earned her an Oscar nomination (her only one). Like Riva, the film’s male lead, Eiji Okada, had a long and productive career although, at least artistically, he never again reached the heights of Hiroshima Mon Amour. He was, however, better known internationally, having appeared in American films like The Ugly American, where he played opposite Marlon Brando (who apparently hand-picked him to be his co-star).

Most critics would argue that Hiroshima Mon Amour was Resnais’ most accomplished film, perhaps because it was his first feature and he poured all of his innovation into its making. (I’m actually partial to his Hiroshima follow-up, Last Year at Marienbad.) He would continue making movies into the 2010s (he died at the age of 91 in 2014) but, as with many directors who made their marks in the middle 20th century, his later projects often seemed to have lost their spark. For its vision and its unconventionality, Hiroshima Mon Amour remains the foundation of his legacy and, although some of its storytelling elements are eclipsed by its stylistic and philosophical ones, it remains an intriguing and important milestone of late ‘50s international cinema.