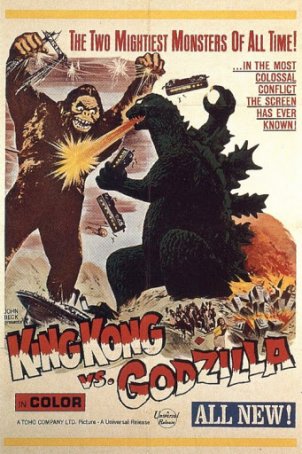 When it comes to bad movies, King Kong lovers have a plethora of choices but only three merit true consideration: King Kong Escapes, the 1968 Japanese film with a Blofeld-style villain named after Britain’s most beloved Time Lord; King Kong Lives, the ill-conceived sequel to Dino De Laurentiis’ 1976 remake; and 1962’s King Kong vs. Godzilla (not to be confused with the not-a-remake 2021 film, Godzilla vs. Kong, which reverses the combatants’ order and drops the “King”). For connoisseurs of the so-bad-it’s-good classification, there’s no question which one reigns supreme. The titanic smackdown, the first of the kaiju cage matches, represents cheese at its ripest.

King Kong vs. Godzilla is only the second movie to have featured the Big Gorilla. Although there have been eight feature films starring Kong, one was made prior to 1962. King Kong vs. Godzilla can trace its genesis to an idea from Willis O’Brien, the special effects genius behind the 1933 original. However, the finished film bears little resemblance to the story treatment (King Kong vs. Prometheus) that O’Brien brought to producer John Beck for development. Toho, long having wanted to make a King Kong movie, jumped at the opportunity to replace the “Prometheus” of O’Brien’s concept with “Godzilla” and, in the process, the studio created the first must-see team-up giant monster movie. The director, Ishiro Honda, was one of the titans of Japan’s mid-20th century monster movie boom, with credits that included the original Godzilla as well as a host of the monster’s early romps. 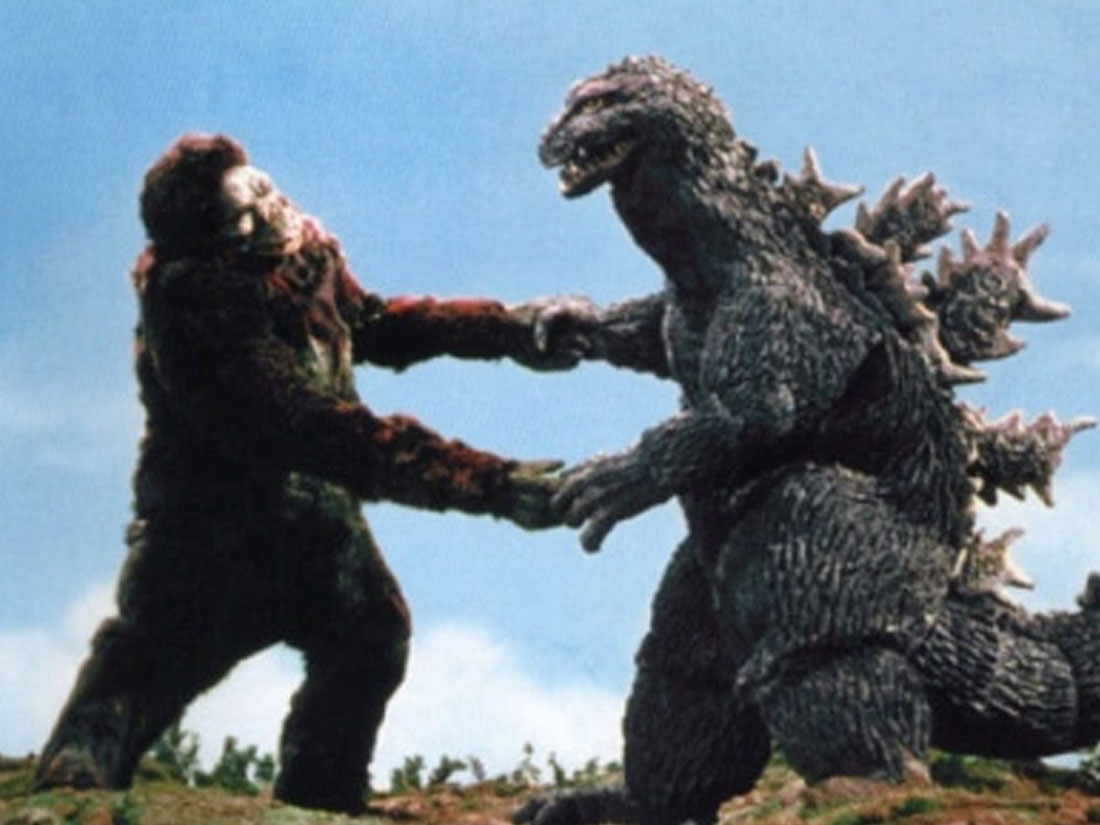 Two versions of King Kong vs. Godzilla exist and, if you’re serious about getting maximum enjoyment out of the production, the English-language/International version is unquestionably the one to see. The Japanese release takes itself almost seriously, making an attempt to create characters and build relationships among the human beings. While those might be important considerations for something made by Ozu or Kurosawa, it’s just about the least important thing in a monster movie. The English-language edition turns the humans into mannequins mumbling inane, corny dialogue (emphasis on “corn”) and adds all sorts of idiocy featuring a news anchor named “Eric Carter” (Michael Keith). If you’re not watching the version of King Kong vs. Godzilla featuring Carter, you’re not getting the full experience. Turn it off and find the other one. You’ll thank me for it later when you’re rolling around on the floor laughing uncontrollably.

There is a story of sorts although the less said about it the better. It takes about half the movie to get the two monsters on screen together, which is 45 minutes too long. During that part of the film, Godzilla wakes up inside an iceberg and fries a nuclear submarine and we get an altered version of Kong’s origin story on Skull (named “Faro” here) Island. This time, he’s a drug addict who guzzles narcotic berry juice and does battle with a giant octopus that looks like it was made out of cellophane. He is brought to Japan on a raft, escapes, and heads straight for the title bout. 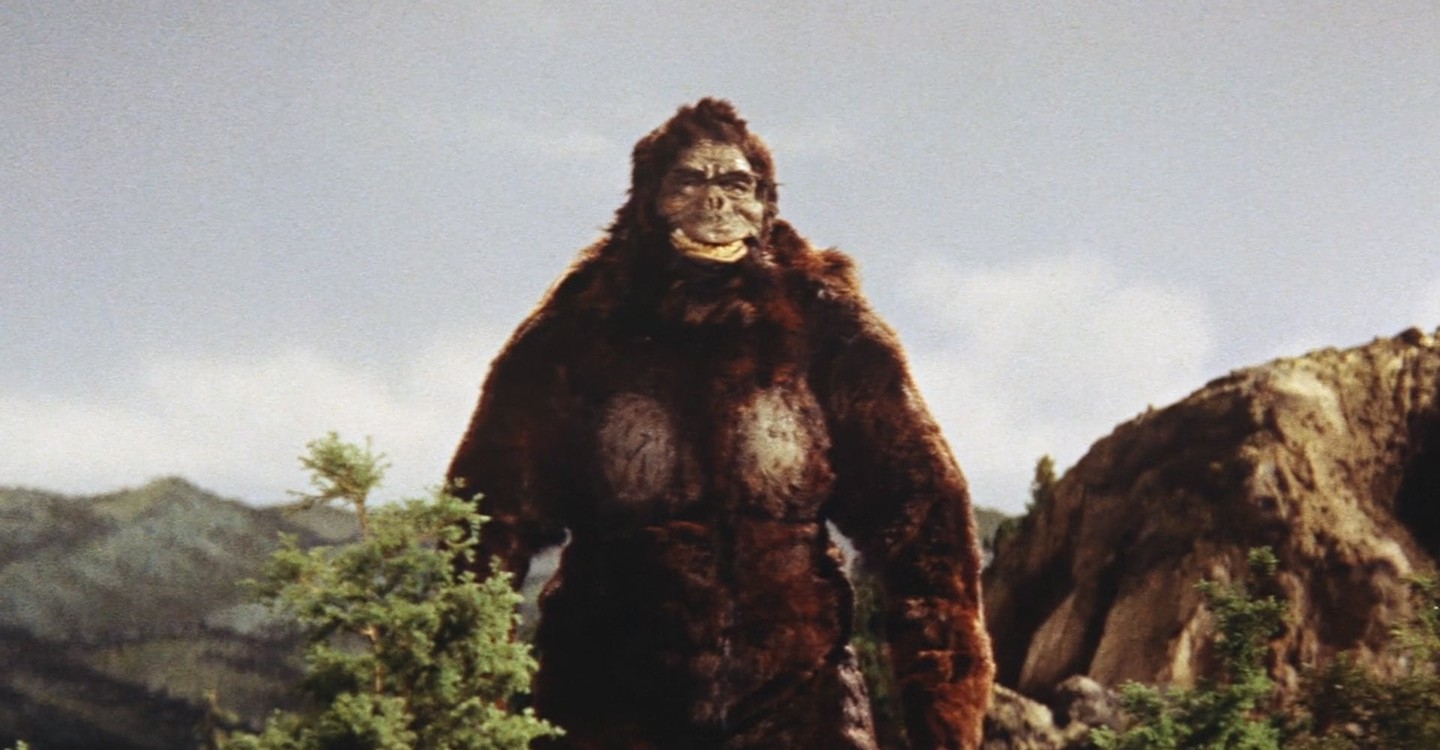 There are two confrontations between the monsters. The first doesn’t last long. As soon as Kong realizes that Godzilla can breathe fire, he gets an “Oh Crap!” look on his face and runs away. Later, after receiving a nice buzz from a powder form of the berry juice and grooving to his favorite Faro Island tunes, he’s ready to take on Godzilla again. This time, he comes out hot and seems like he might be winning. Unfortunately, his end zone dance gets a little out-of-hand; he smacks his head into a rock and knocks himself out. (The scene looks like it could have been choreographed by The Three Stooges.) Godzilla makes like a cat in a litter box and tries to bury Kong under dirt and small rocks before smacking him a few times with his tail for good measure. But Kong must have studied the weather reports ahead of time because, just when all seems lost, along comes a thunderstorm. The giant gorilla, who gets supercharged by electricity, is struck twice by lightning and that gives him the upper hand in this Wrestlemania precursor.

With one exception, I’m not going to nitpick King Kong vs. Godzilla. There’s no point. Watching this movie, you’ll laugh and cry – the former because it’s funny (although often unintentionally so) and the latter because there comes a point when you’re laughing so hard that the tears will start rolling down your cheeks. But, about that “exception”… I’m not sure what the filmmakers were thinking when they designed Kong. His fur looks like an old coat that was left too long in a closet without mothballs and every time I watch the movie, I invariably find myself looking for a zipper. As for the face…it’s hard to describe except perhaps as a creepy, zombie-like mask that looks like a bad paper mache job. Considering that the creature battling Godzilla looks nothing like the 1933 monster, a more appropriate title might have been 90-Foot Tall Voodoo Monkey Creature vs. Godzilla. Or something like that.

The concept is infinitely more appealing than its execution, which is why the idea was resurrected by Warner Brothers as the concluding chapter of a four-movie arc begun with 2004’s Godzilla reboot. Those expecting a remake may be saddened to learn that the 1962 film’s human leads – the dashing duo of Sakurai (Tadao Takashima) and Fujita (Keji Sahaka), the fatuous Mr. Tako (Ichiro Arishama), the corn-obsessed Furue (Yu Fujiki), and the damsel-in-distress Fumiko (Mie Hama) – are all absent. Worst of all, however, the 2021 movie doesn’t have Eric Carter!

I saw King Kong vs. Godzilla for the first time when I was eight years old, watching it as part of an all-kaiju Saturday afternoon Creature Double Feature matinee. I was entranced and, even though I couldn’t figure out why King Kong looked like something my cat had coughed up, the experience was blissful. Taking this film seriously requires the qualities of youth and unrequited monster movie love. For an adult, this is a comedy. It’s a very, very bad movie by almost any definition but it is capable of providing the guiltiest of pleasures. Throw out the star rating on this one. King Kong vs. Godzilla is a pure gold-plated turd.